You are here Home » Simple Korean Kimchi BBQ Burgers from Mastering the Art of Vegan Cooking + A Cookbook Giveaway!

If this vegan simple korean kimchi BBQ burger isn't a delicious plant-powered burger, I don't know what is... 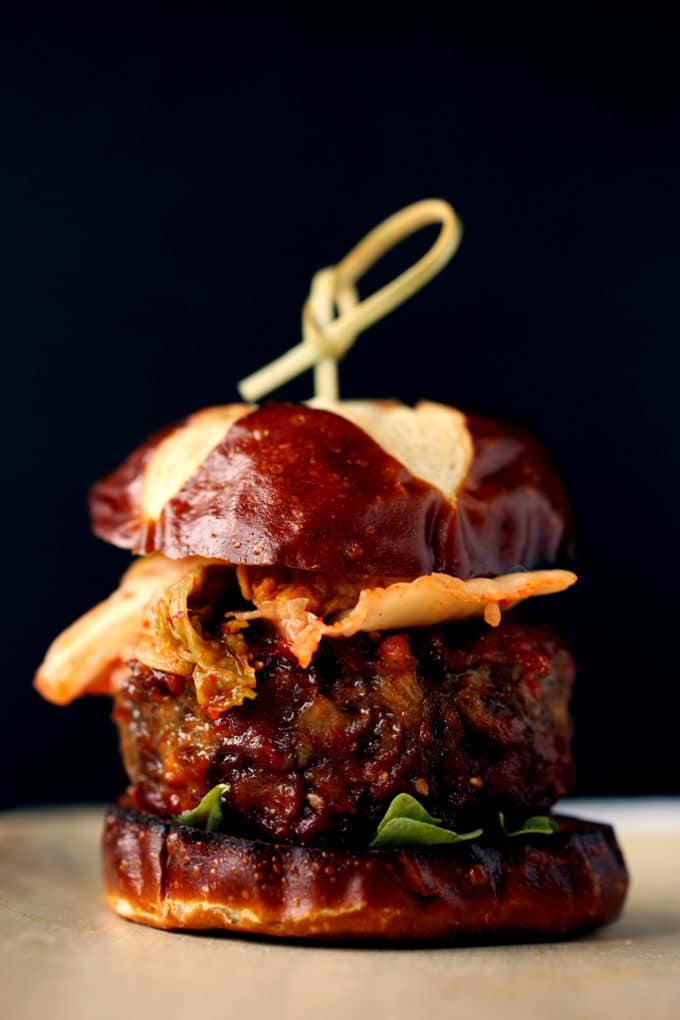 This tall stack of saucy goodness is the Simple Korean Kimchi BBQ Burger from Mastering the Art of Vegan Cooking by Annie and Dan Shannon. They're also the brilliant and compassionate minds behind the vegan blog Meet the Shannons.

Mastering the Art of Vegan Cooking contains over 200 thoughtfully-crafted vegan recipes, each equipped with a price estimate per meal as well as creative ways to repurpose leftover ingredients to get the most bang for your buck. Besides these burgers, which I already know I'll be making again and again, I'm looking forward to trying the Butternut Squash and Beer Poutine Party (Beer Poutine Party?? Can I come?), Chai Spice Cheesecake, and Ginger Plum Oatmeal... and about 196+ other recipes in the book.

Annie and Dan's lighthearted charm and wit is woven throughout each recipe in a way that feels as if a longtime friend is standing beside me in the kitchen, both guiding my (sometimes clumsy) culinary craft and entertaining my spirit. I literally laughed out loud at a point in the kimchi burger recipe when you're instructed to mix the burger "meat" with you hands, because just as I winced at the thought of manually combining veggie protein, molasses, and the like with my hands, I read the next line in the recipe...

"The molasses is really sticky, so this is kind of messy and weird, but it's totally worth it. Promise."

Dang, they're good. Providing that nudge of encouragement just when I was about to break the rules and bust out my mixing spoon.

Annie and Dan, you in here?

Wherever they are, they clearly know what they're talking about, because that burger up there? It was effortless to make and came together in under 30 minutes. The recipe actually makes 4 burgers, but they looked and smelled so good that one of them didn't survive the 30-foot journey from kitchen to makeshift photography studio (aka the guest bedroom). And then there were three... 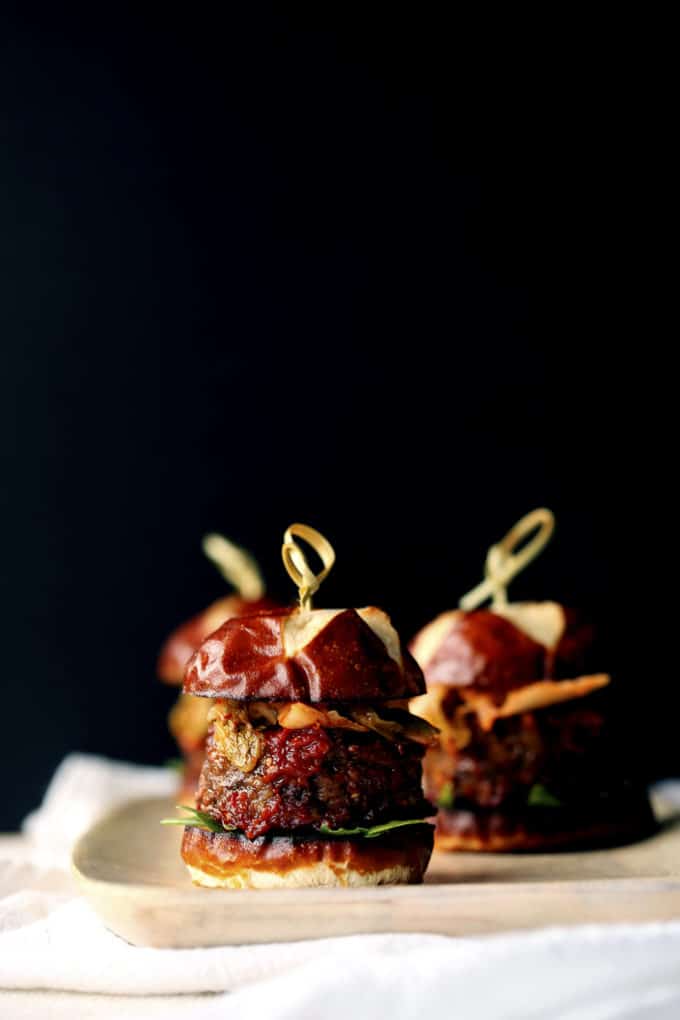 These Simple Korean Kimchi BBQ Burgers are hearty, tangy, and offer just the right amount of kick from a drizzle of sriracha that gets folded into the homemade BBQ sauce. Trust me when I say that they're even better than they look and rank within the top 3 best vegan burgers I've ever eaten. Yes, that good.

Be sure to checkout the recipe for the burgers below and scroll down to the very end of this post for a chance to win a copy of Mastering the Art of Vegan Cooking, which is also available for purchase here. 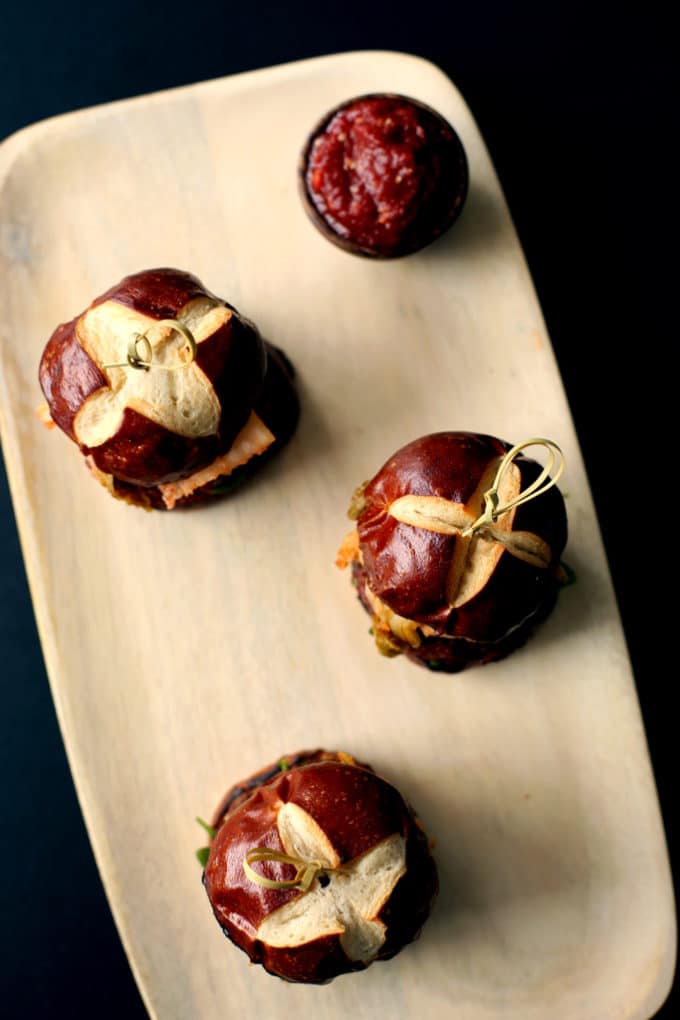 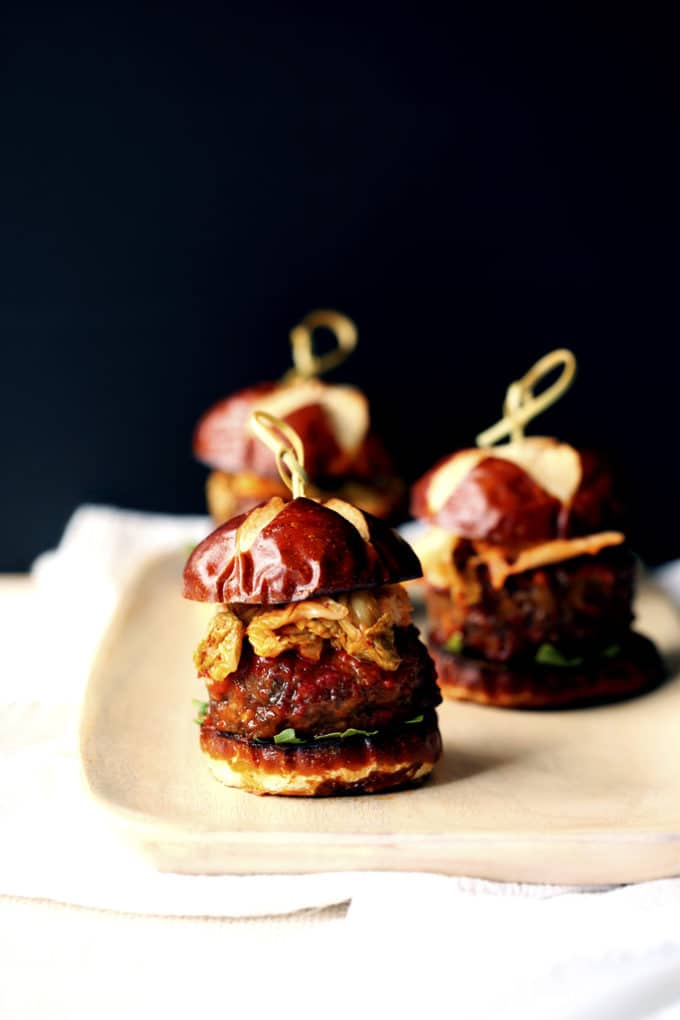 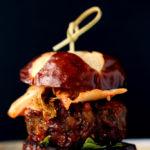 MAKES 4 BURGERS $2.68 PER SERVING Years ago, I had a vegan Korean BBQ burrito in Los Angeles. The burrito had jackfruit to replace the steak, and I still think about it when I’m figuring out what to have for lunch. Jackfruit is pretty pricey and hard to come by in Brooklyn, but whenever I get nostalgic for that burrito, I make these spectacular burgers. They combine the signature sweet Korean BBQ sauce with a “beefy” veggie burger and spicy kimchi (a sort of hot Korean sauerkraut usually made with napa cabbage, radishes, and green onions) to create a dinner just as good as those burritos. Plus, you’ll hopefully have some leftover kimchi as a side for lunch the next day.
Course Burger
Servings 4 burgers
Author Annie and Dan Shannon | Mastering the Art of Vegan Cooking

One winner will receive a copy of Mastering the Art of Vegan Cooking. For a chance to win, simply enter the giveaway using the Rafflecopter widget below and comment on this post between June 26th and July 10th. Please note: this giveaway is only open to residents of the US and Canada.