This vegan french onion soup with homemade mozzarella is everything french onion soup should be: packed with caramelized onions, salty, savory, and topped with a thick crouton and generous mound of melted cheese. This recipe was originally published on December 10, 2014. The post has since been updated with new photos. The recipe remains the same! 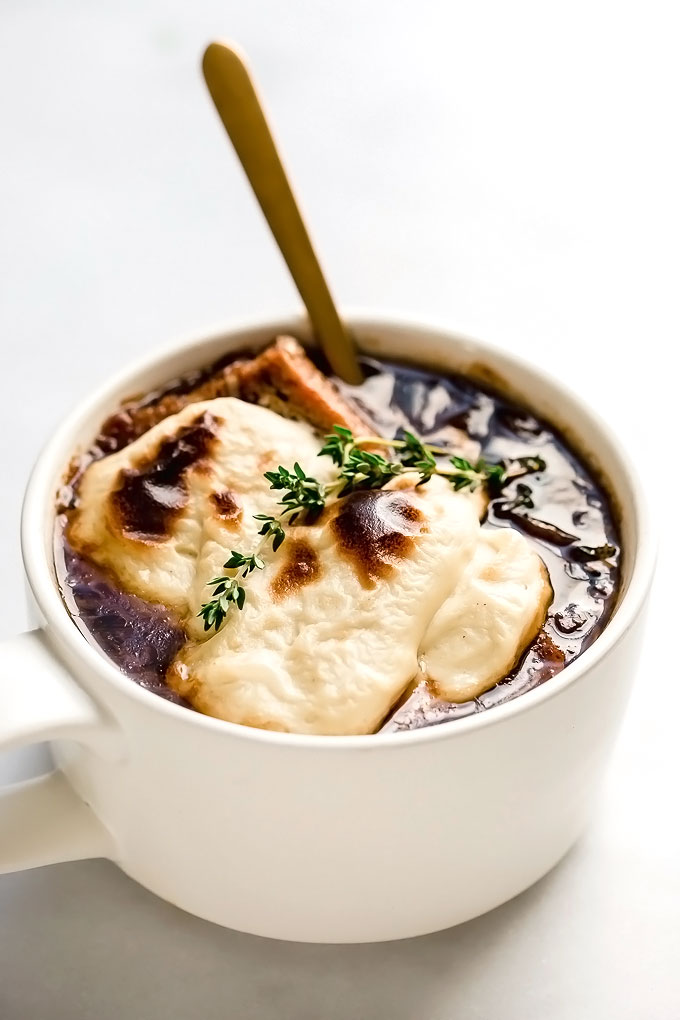 The below story is one I shared when I originally wrote this post in December 2014. Take a trip down memory lane with me or jump straight to the recipe if you prefer. Happy soup making and happy holidays!

The holidays veil my thoughts with a reminiscent spirit. I find myself passing the drive to and from work thinking about the past. Sometimes my thoughts float all the way back to my early childhood and settle into memories that have faded with time.

While Dan and I were home for Thanksgiving, we made a point to drive by the house I lived in until I was seven. It was the house my mom grew up in, and my parents purchased it from my grandparents shortly after I was born. The family that bought the house from my parents still lives in it to this very day, and they've maintained the same landscaping, colors, and overall appearance my parents had so many years ago.

After we drove past the house—figuratively traversing memory lane—and crossed back onto the highway, we passed the spot where our old favorite restaurant, Derby Street, used to reside. Within an instant, my mind flooded with memories.

My mom's love for rice pudding.

The way my little brother Brad and I used to exit the restaurants' booths by way of crawling underneath the table.

The above flurry of memories led me to later recreate a vegan variation of Derby Street's French onion soup. 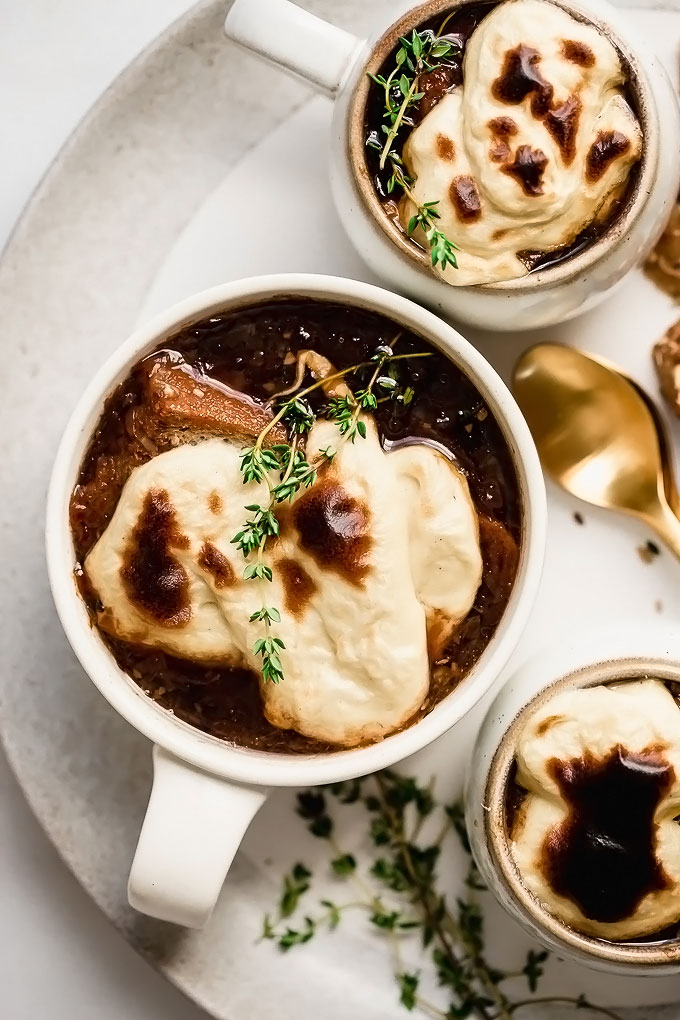 When I share my plans to make a vegan version of French Onion Soup (let's shorten that to FOS) with my mom, she was encouragingly skeptical.

That sounds so good, but how are you going to do it without beef broth?

My mom had every right to ask this question because she's known for making an epic FOS. So, point well received and challenge accepted.

After some tinkering with seasonings, this vegan version of FOS came to be, and let me tell you: it's damn delicious. I hardly ever swear on here, so you best believe this is the good stuff. Bring your worries, cares, and doubts to the dinner table, because this soup will allay them all.

Dan took one bite, let out a tricky-to-interpret groan, and boldly declared this was the best French Onion Soup he'd ever tasted.

To make this soup, you'll start by melting down a large dab of coconut oil in a dutch oven or oven-safe pot. You'll then add in a mountain of sliced onions, cover the pot, and let them sweat for 30-ish minutes. 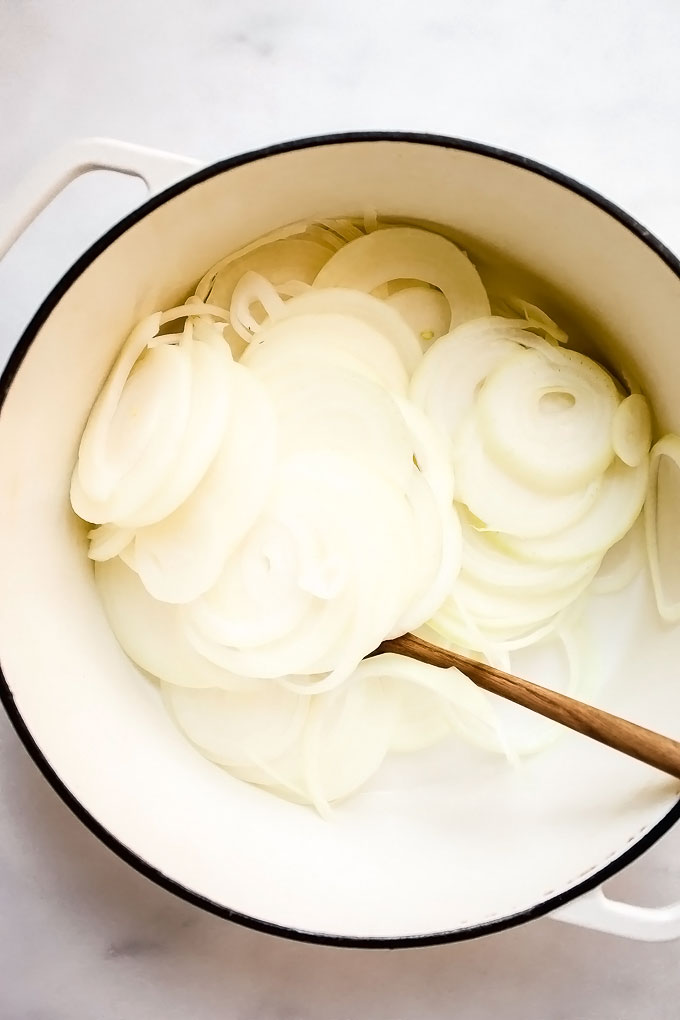 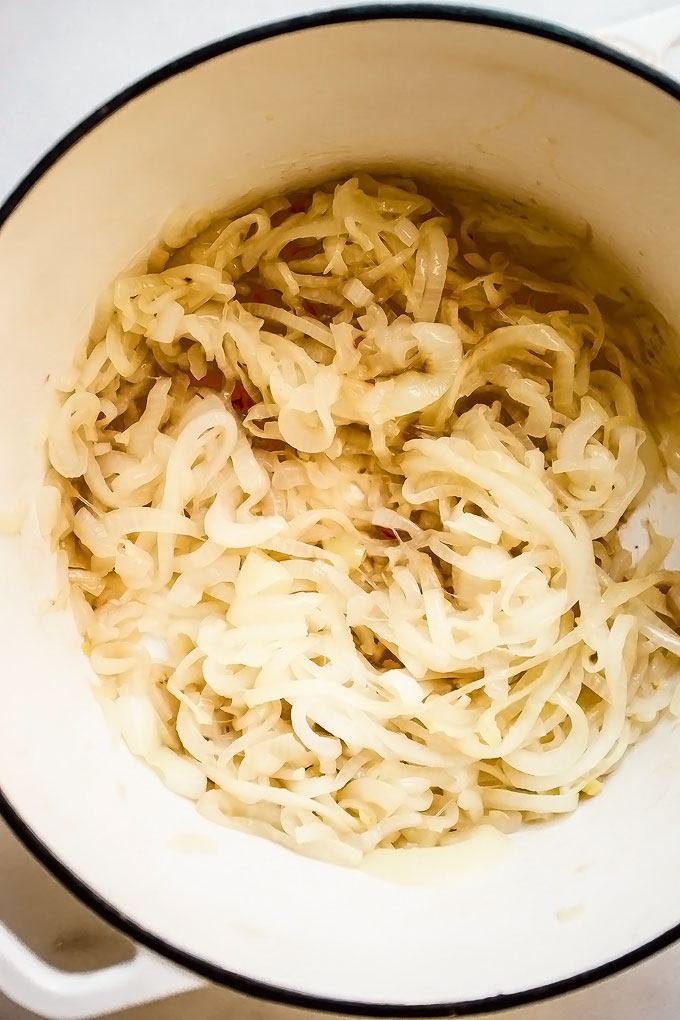 Once the onions have softened and mellowed, you'll pop the entire pot into the oven (hence the need for one that's oven-safe) and continue to cook and caramelize the onions for 45 minutes or so.

Once the onions have reduced to about ¼ of their original volume, you'll return the pot to the stove, add a generous splash of dry white wine, and simmer off the alcohol for a few minutes. 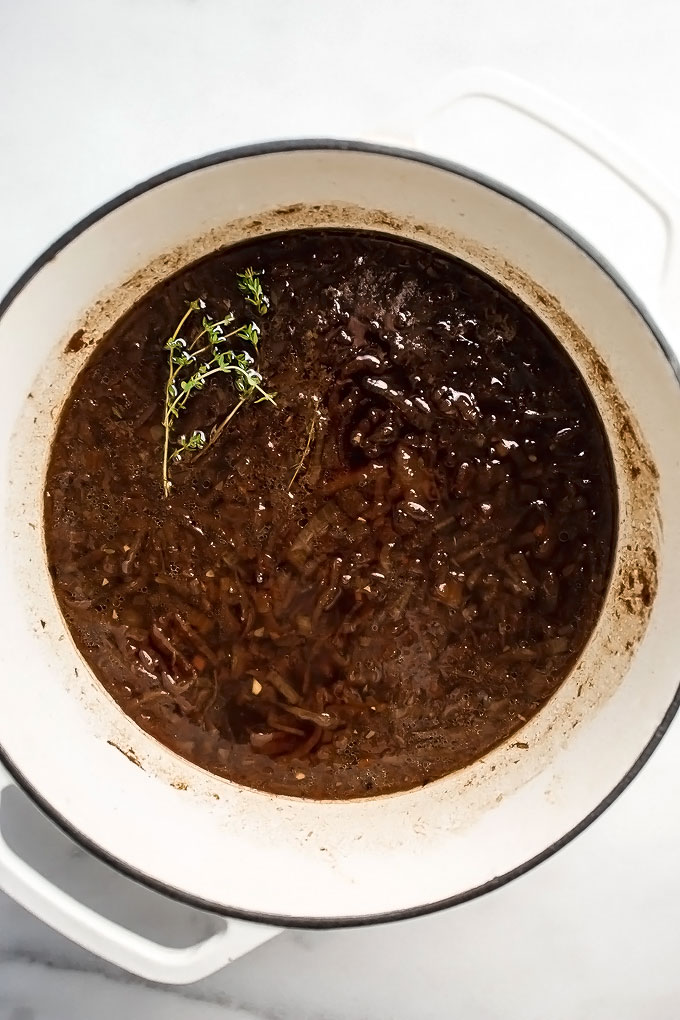 While the soup simmers, you'll make a batch of this vegan mozzarella cheese.

Once the soup is ready, ladle it into small crocks, top with toasted baguette slices, generously dollop on homemade vegan mozzarella, and broil until the cheese is golden brown and bubbly. 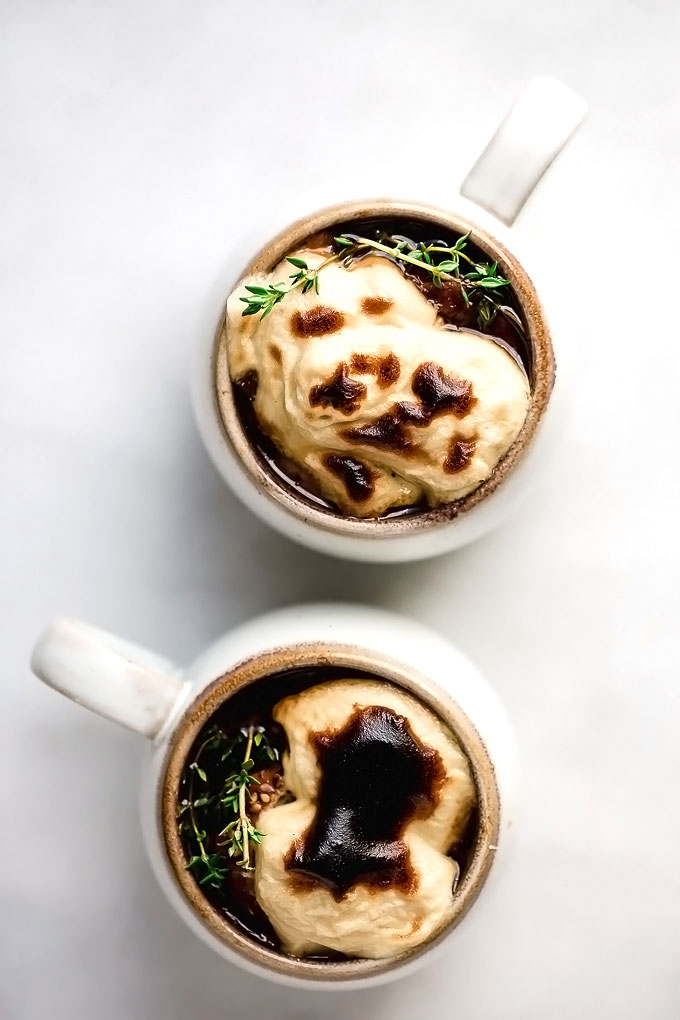 I hope  you love this vegan French onion soup with cashew mozzarella as much as our family does.

On that note, let's slice some onions and shed tears of happiness! 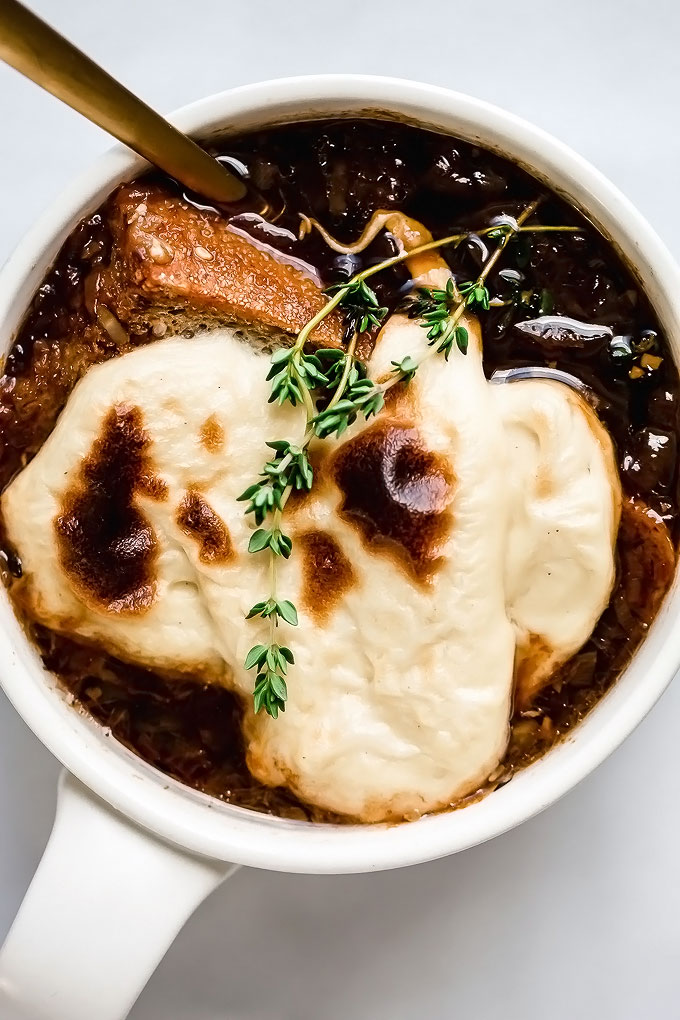 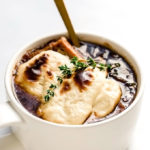 For the French Onion Soup

*Use tamari for a gluten-free option.
**If you don't have a high-powered blender, be sure to soak the cashews in hot water for 30-45 minutes before blending.