This vegan BBQ pulled pork will fool even the most devout of meat lovers. It uses a secret (fruit) ingredient to create the most delicious, realistic pulled "pork" ever. Note: This recipe was originally published on July 30, 2013. The post has since been updated with new photos and helpful tips. The recipe is the same! 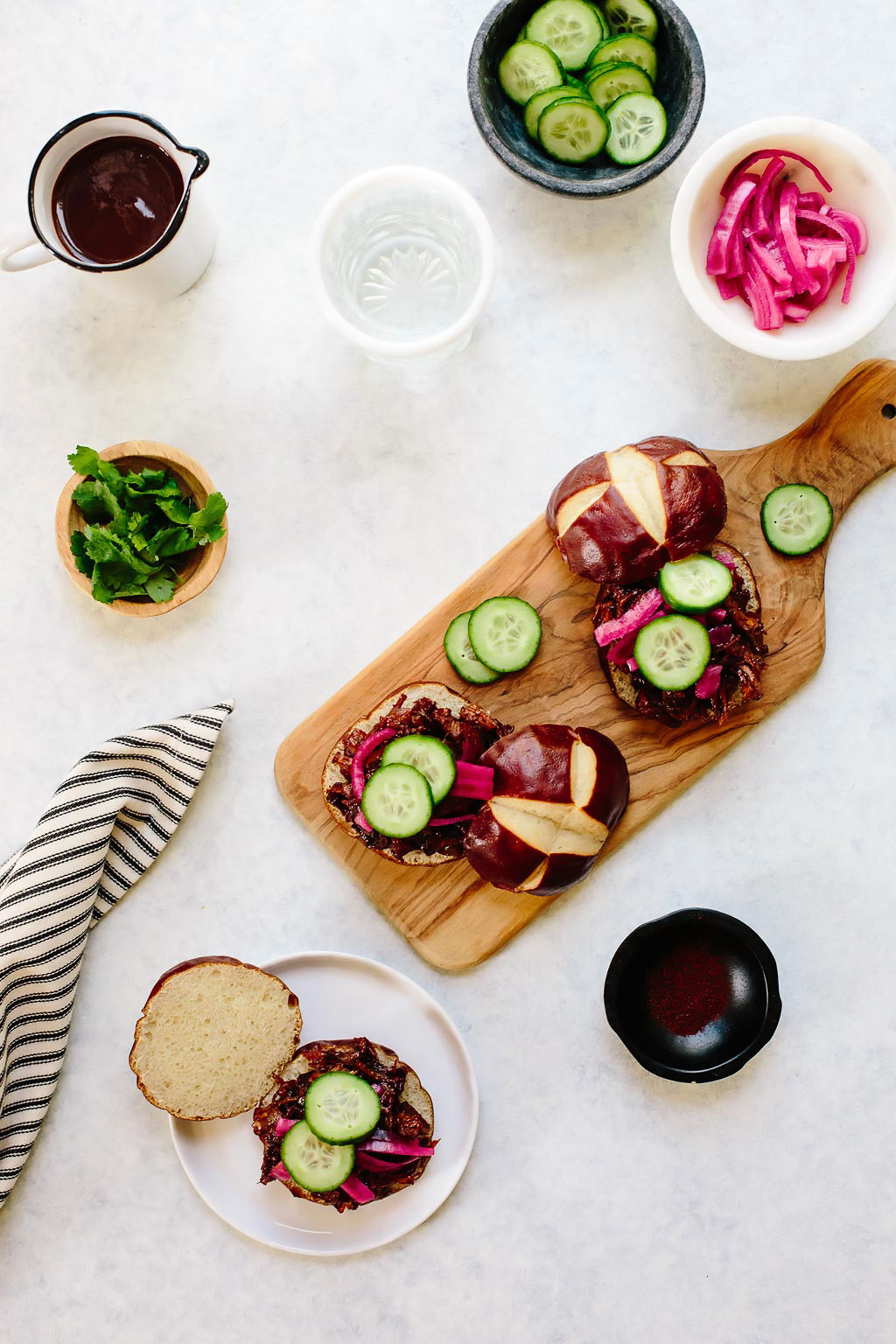 You guessed it: vegan BBQ pulled pork. Actually, you probably never would have guessed it. I certainly know I wouldn’t have.

Not a joke, not a dream. This is real life, and my goodness it is tasty.

I first read about Jackfruit, the miracle pulled meat substitute, years ago but was never able to find it in non-sugary , syrupy form until 2013. At the time, we lived near a teeny, tiny Asian market and they seemed to have every tricky-to-find ingredient I'd ever been curious about. Serendipitous? I think so.

Jackfruit is a tree-grown fruit native to Southeast Asia. In its unripened form, its flavor is comparable to heart of palm, and it has a stringy, pull-apart texture. It's seriously talented in its ability to take on the flavor of nearly anything you toss in its direction, and the texture is surprisingly meat-like. Jackfruit's also full of fiber, vitamins, and trace minerals. You ask and jackfruit probably delivers. 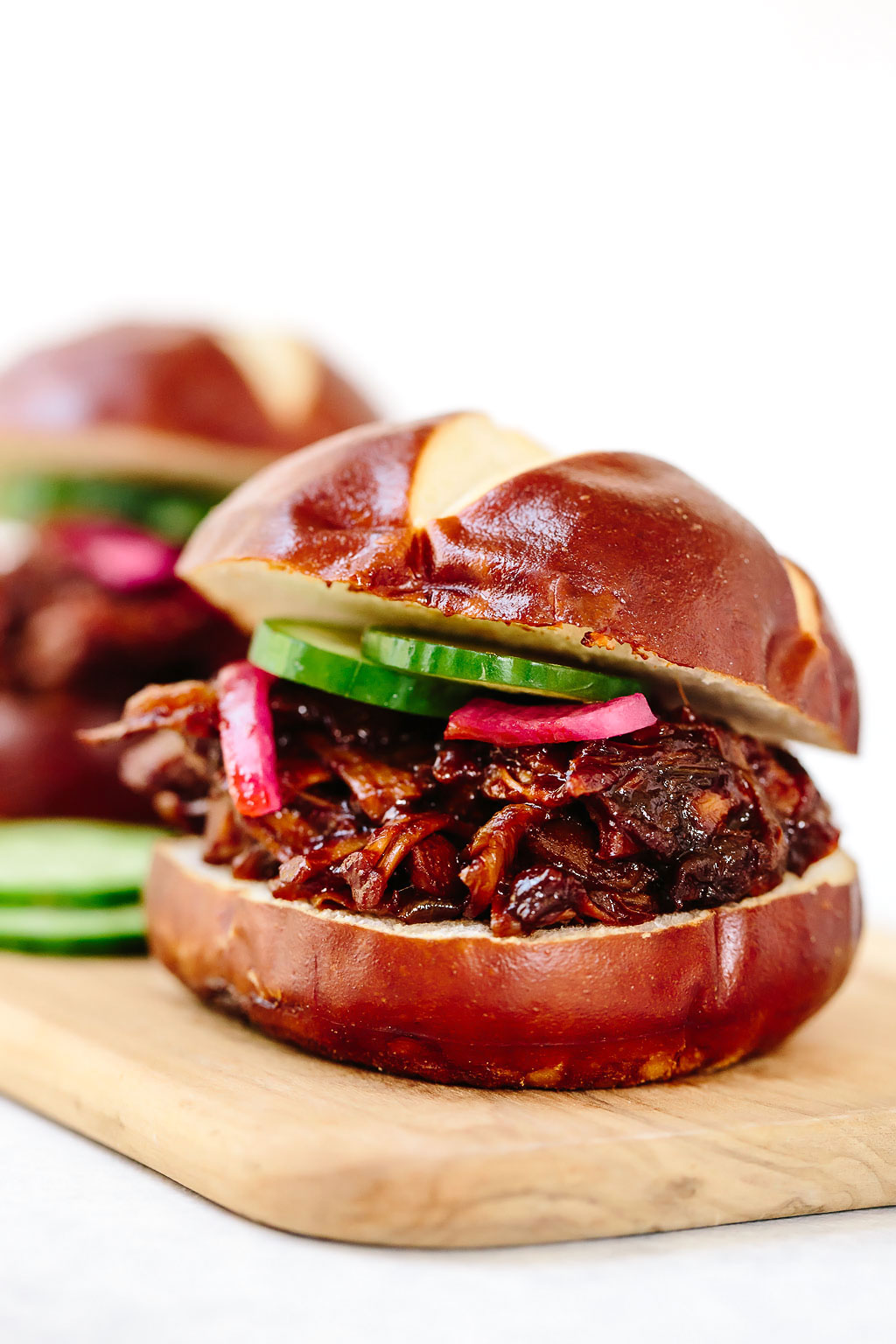 Before I get to this recipe, let me take you back to a story I not-so-lovingly call the “Pulled Pork Disaster of 2011.”

Dan and I had invited my brother and his (now) wife, Abby, to our place for dinner one Saturday night. I was determined to satisfy both meat lovers and myself for that dinner. In a moment of pure crazy, I thought that making a real pulled pork dish and a vegetarian pulled pork dish was the best idea ever.

I went to Whole Foods and asked for 7 pounds of pork shoulder. Seriously, seven pounds? The butcher should have known I had a slip in my sanity and refused to sell me any meat at all when I said I was cooking 7 pounds of pork for 3 people.

That's crazy. I thought each person I was cooking for was going to eat 2.33 pounds of meat? I phrase that as a question only because it makes me feel better to think that perhaps I did question that ridiculous pork-to-person ratio at the time. This was strike 1.

I also picked up some seitan for myself, which I had high hopes of serving as an acceptable vegan replacement to pulled pork.

Where it all went wrong…

As our slow cooker slaved away on the 7 pound hunk of meat, my brother, Brad, began to question whether it was pork at all. With one swift lift of the slow cooker lid, he declared that I'd actually purchased 7 pounds of beef, not 7 pounds of pork. I at least take comfort in knowing that the butcher at Whole Foods was slightly more crazy than I on that cold March day. This was strike 2.

I tried to put my pork troubles behind me as I worked away on shredding, marinating, and cooking my seitan BBQ un-pork. I figured at least there'd be one silver lining in this BBQ Pulled Pork Disaster.

As I served Dan, Brad and Abby their pulled beef sandwiches, I offered up a taste of my BBQ seitan sandwich. Brad, being the supportive younger brother, offered to try a bite to see how it compared. Upon biting into the sandwich, a dismal look came across his face as if to say, “I feel sorry for you.” And then, those exact words came out of his mouth. And those words were delicately followed by the statement, “This sandwich tastes like pencil erasers coated in barbeque sauce.” And there, my friends, you have strike 3.

That was the last time I attempted to cook meat (and BBQ seitan).

I’m both relieved and ecstatic to say that this BBQ pulled "pork" made from jackfruit tastes nothing like pencil erasers. It tastes so delicious that you’ll be double checking just to be extra certain you didn’t accidentally pick up a can of meat.

The jackfruit is coated in spices and simmered in barbeque sauce until it is fall-apart tender. The flavor, texture and look of it will be enough to woo meat lovers and vegetarians alike. AND it comes together way quicker than the real thing.

First order of business: Sauté a small onion in a bit of olive oil. While the onion sweats and softens, drain a can of young green jackfruit (in water or brine) and prepare it by cutting off the triangular tips like so. If you're not able to find jackfruit, you can use two cans drained heart of palm instead and skip the cutting step altogether.

Next, prepare your spice rub by mixing together brown sugar, chili powder, cumin, garlic powder, smoke salt (optional but so good), and cayenne. 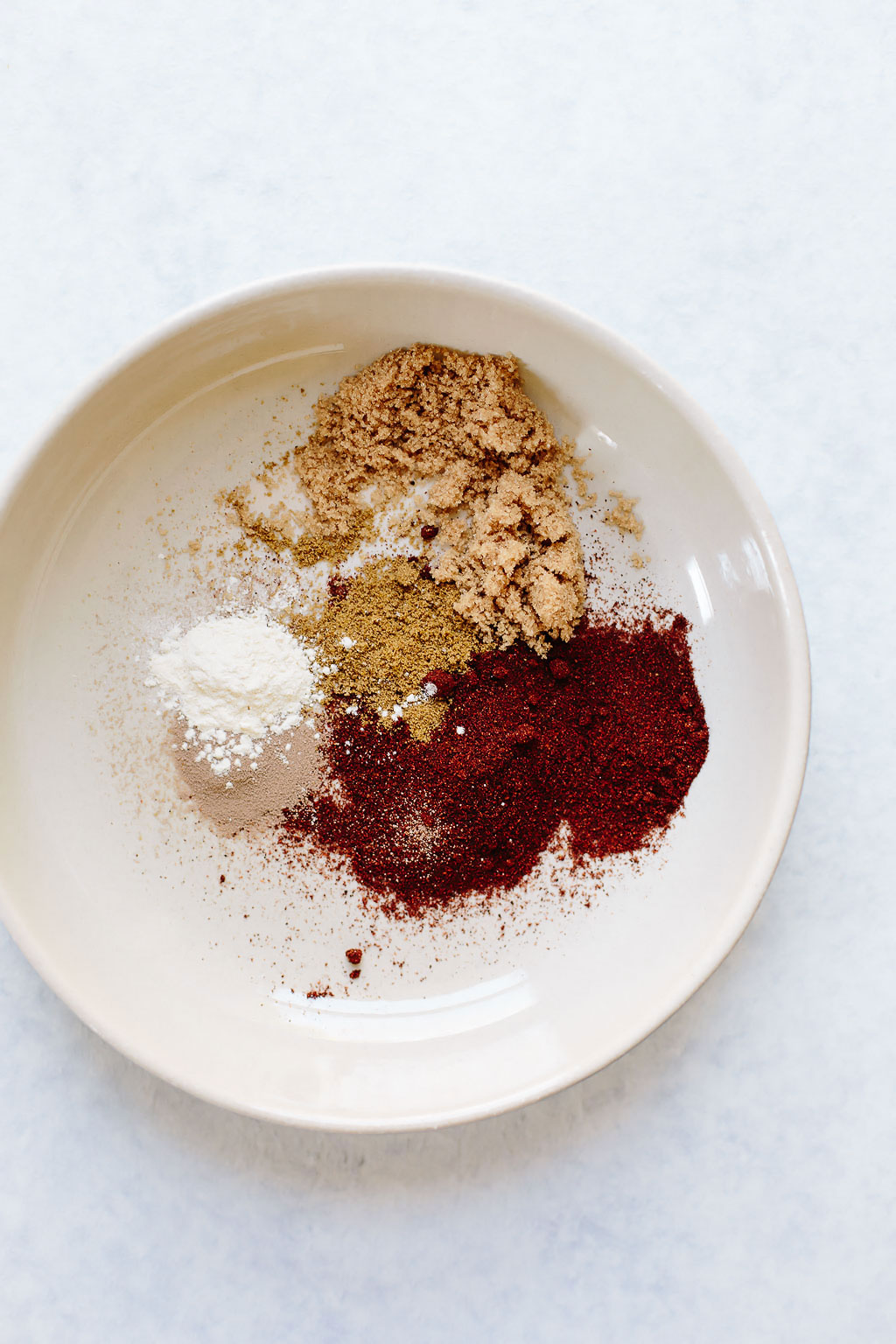 Once your spice rub is prepared, add the jackfruit (or heart of palm) and toss to coat. 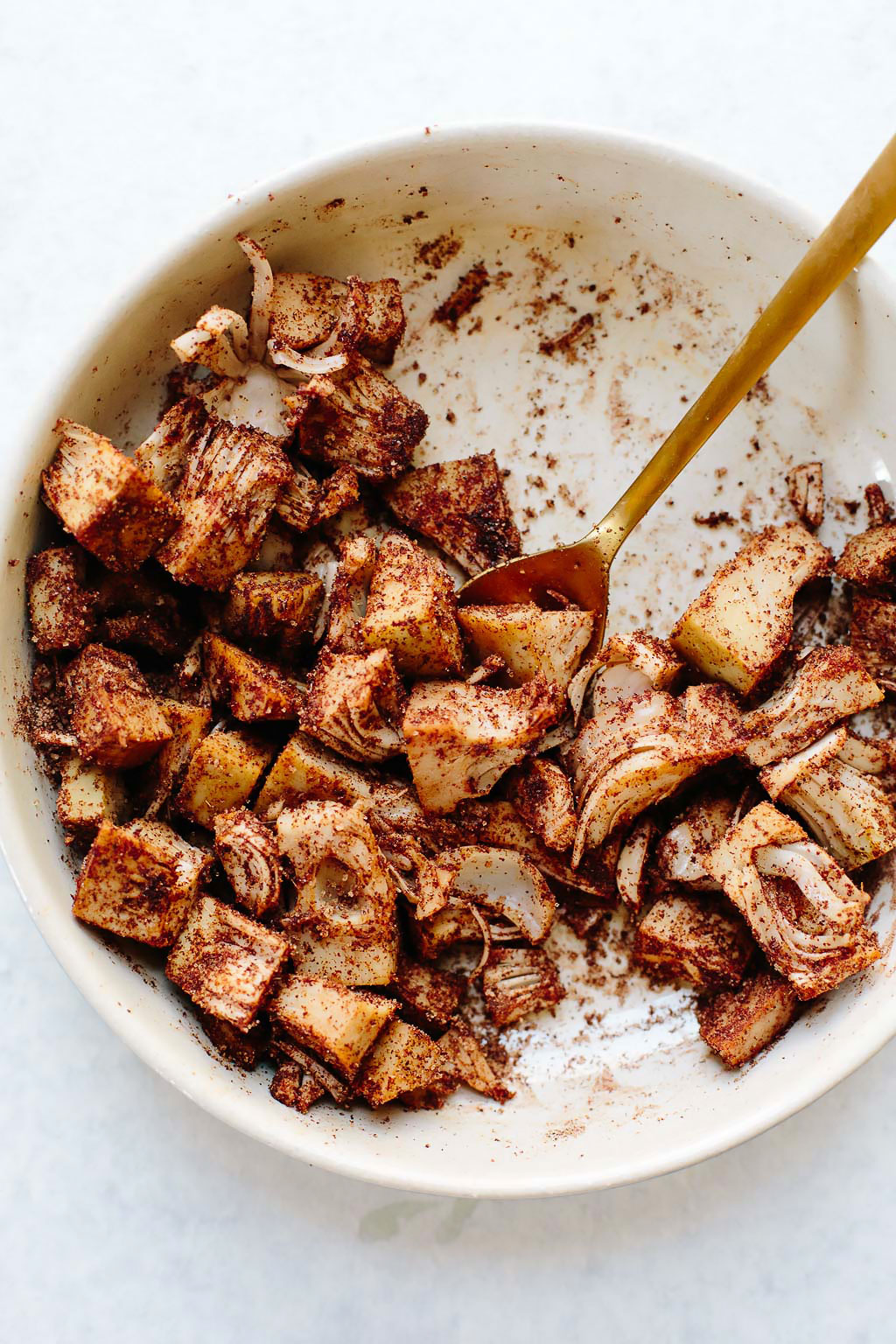 Next, add the jackfruit to the pan with the onion and sauté for five minutes, or until it begins to develop a subtle crust.

Meanwhile, whisk together your favorite store-bought or homemade BBQ sauce (for instance, my 10-minute BBQ sauce) and a bit of water. Then, add the mixture to the pan, reduce the heat, cover, and simmer for 20 minutes, or until the jackfruit is fall-apart tender.

Once tender, use two forks to shred the jackfruit. Continue to simmer for just five more minutes, or until the barbecue sauce thickens and is almost completely absorbed by the jackfruit. 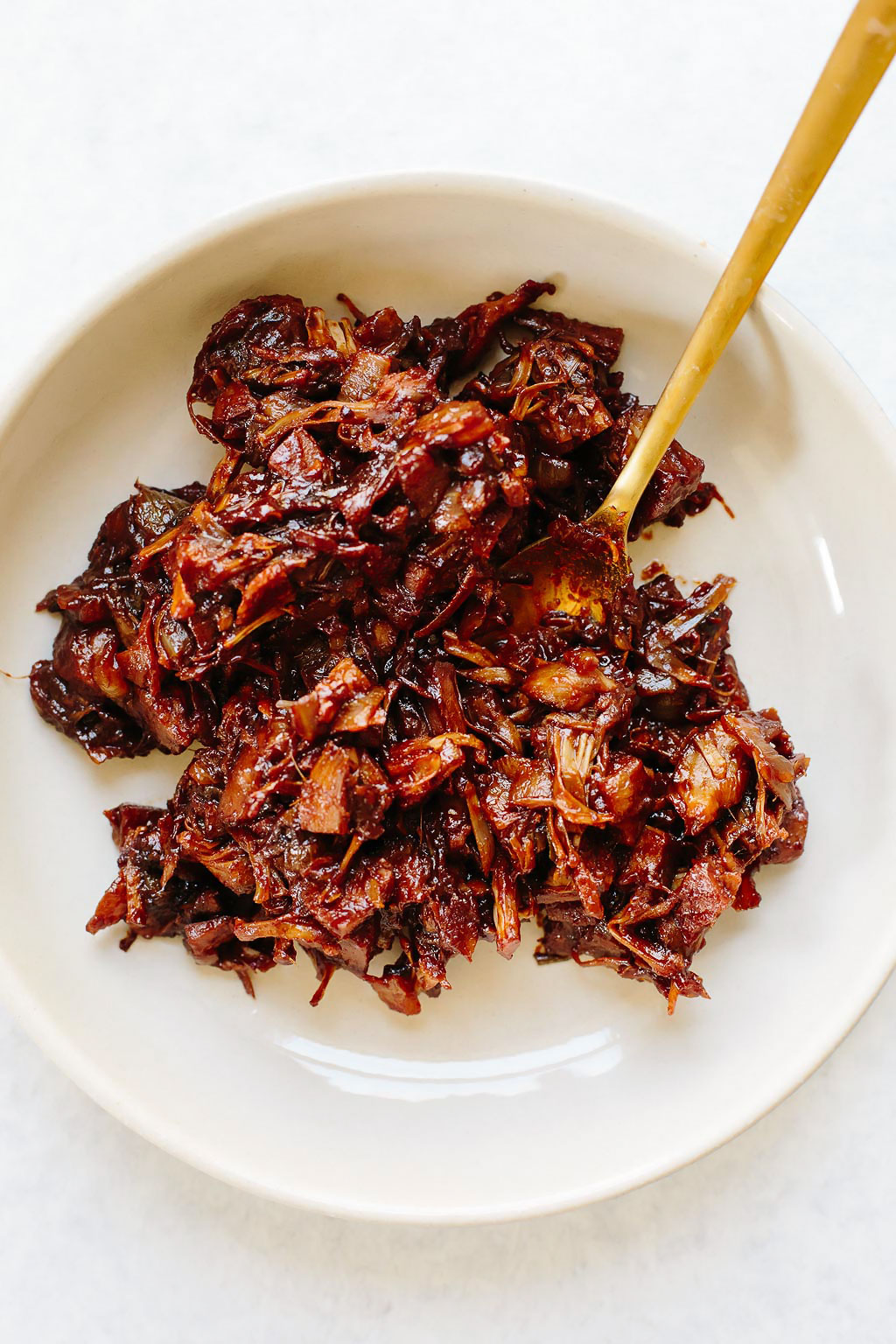 Serve the jackfruit on buns or slider rolls and garnish as desired. I love the bright, fresh additions of mini cucumber rounds, cilantro, and pickled red onions. But as always, you do you! Add your favorite toppings and enjoy. 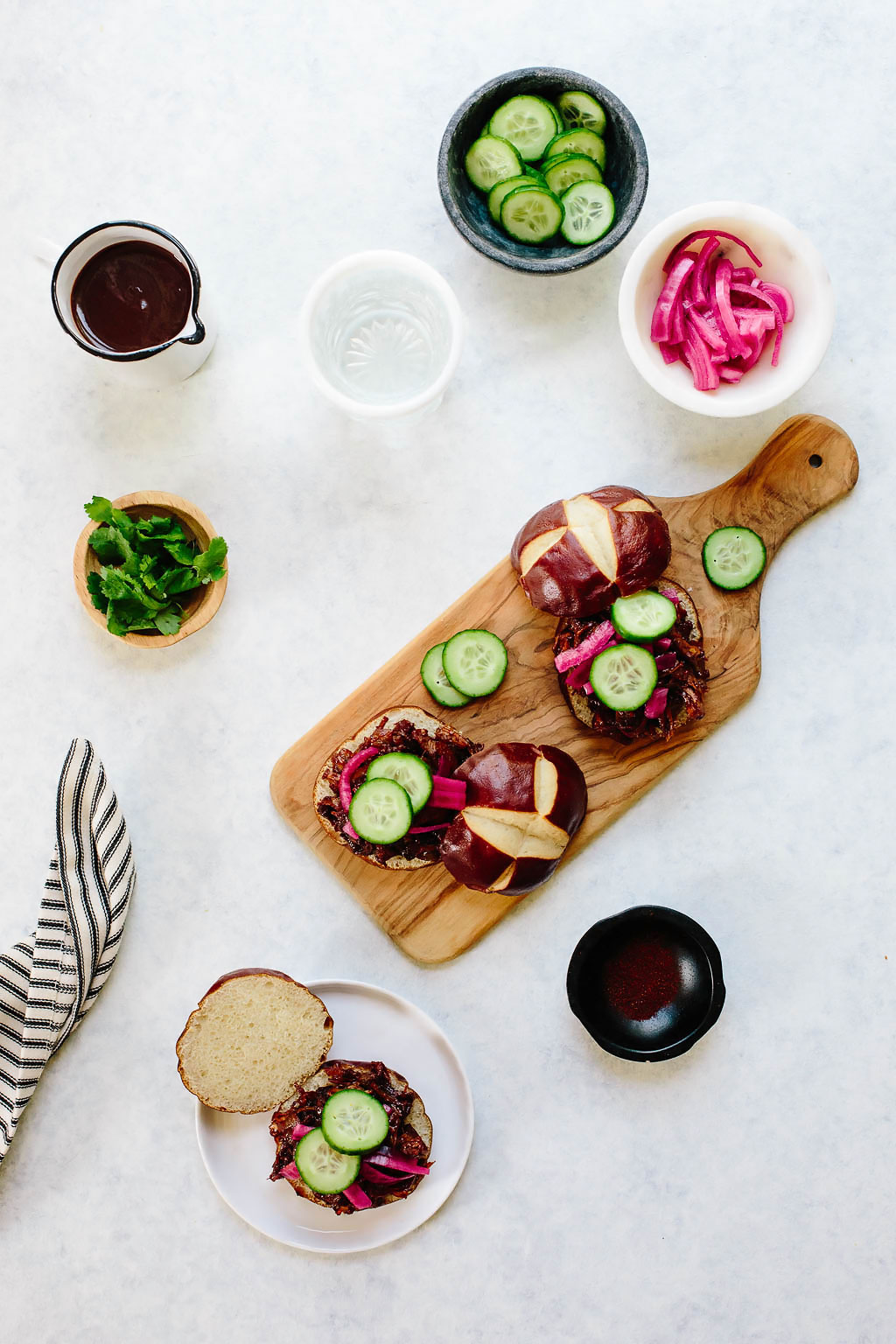 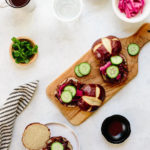 *Jackfruit Finding Tips: Trader Joe's now sells young green jackfruit in cans. Here's the kind I usually use, which you can find in 6-pack cases online (←affiliate link). Some cans of jackfruit are 14 ounces, but they're usually much more packed to the brim which jackfruit than the 20-ounce cans, so you can usually get away with using just one. In a pinch, you can substitute two (14-ounce) cans hearts of palm for the one can jackfruit—just keep in mind the finished texture will be a bit softer.