These vegan BBQ Cauliflower Tacos with Pineapple Salsa are brimming with savory + sweet summer flavors! Cauliflower florets are roasted, tossed in a flavorful combination of spices, and simmered in barbecue sauce until tender. Then, they're tucked into warm corn tortillas with homemade pineapple salsa, a few sprigs of cilantro, and a spritz of fresh lime juice. The smokiness of the spiced BBQ cauliflower complements the sweetness of the fresh pineapple salsa, yielding an irresistibly summery combination that satisfies. 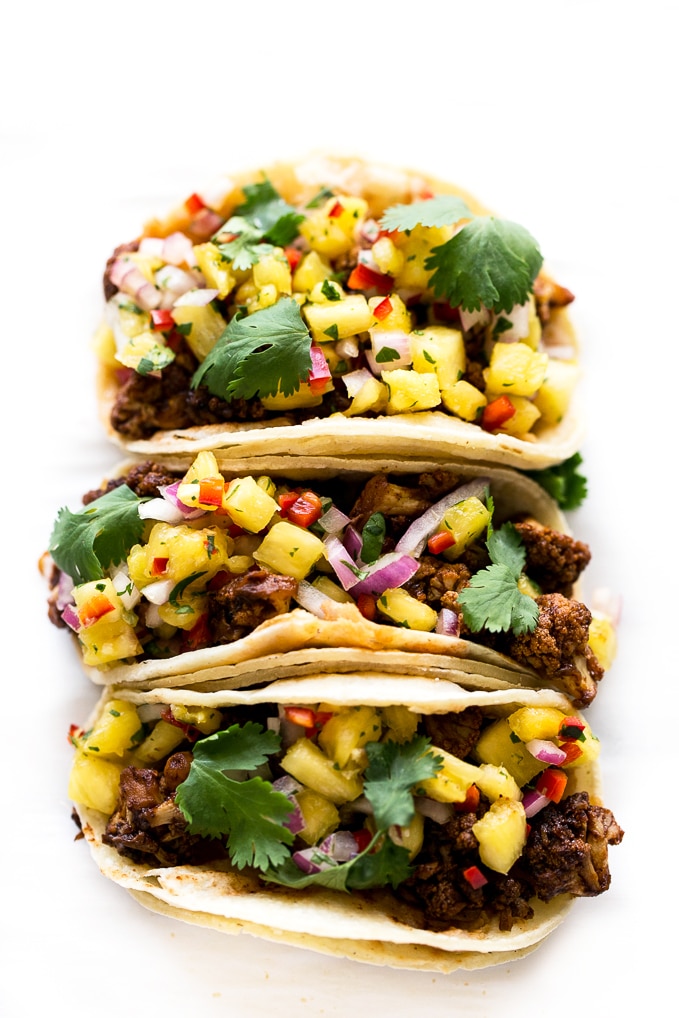 Like most people, I'm a creature of habit. With routines, I'm a thriving version of myself; without routines, the wheels start to fall off.

Take summertime, for instance. In the past, when my regular (i.e., work) schedule would disappear and I turned to face a blank, routine-less canvas, I would let my mood and emotions determine how each day would unfold. Consequently, the most routine thing about my days became the dance of indecision I did every morning.

I found this to be particularly true during the summer of 2013. Dan and I had just moved to a new home in a new neighborhood, and the newness and unfamiliarity of the neighborhood coupled with the blank slate that summer provided was a recipe for disaster. I'd wake up later than usual, shuffle from the bedroom to the kitchen in my pajamas, make myself breakfast, and then consider every single option of what I could spend the day doing.

I could write a blog post or learn more about food photography or go shopping or watch tv or go to yoga class or go for a walk or go to a coffee shop or finish decorating the guest room. The list went on. . . and on. . . and on.

I spent so much time contemplating what I could do that summer that I never actually did much of anything. It wore me down and left me with a case of the summertime blahs. So much so that I eagerly awaited the start of a new school year, simply because it meant the end of summer and the end of the dance of indecision.

But I knew there would be more summers and that I had figure out a better plan for myself. So in the spring of 2014, I took matters into my own hands. In May, just a few weeks before the school year ended, I mapped out a recurring daily and weekly schedule for myself, whittled down the list of potential could-do's to a few impactful to-do's, and created this must-follow morning rule for myself:

Of all the changes I made, this rule was and continues to be the biggest game-changer for me (and yes, I stick to it on weekends too). It's incredibly simple yet incredibly powerful, because it. . .

1| Limits the number of options for what to tackle first thing in the morning, thereby mitigating the risk of developing decision fatigue.

2| Sets the day off on a productive note. Once that first productivity domino is knocked down, the rest will follow more effortlessly.

3| Embodies a form of self-love.

Bear with me on #3. The acts of showering, moving our bodies, and dedicating time to self-care have resounding positive effects that extend far beyond their most obvious benefits. They exemplify honor and respect for the body, heart, and mind, which leads to benefits in mood, self-talk, and even productivity. I don't know about you but I find it difficult, if not impossible, to summon as much motivation when I'm in my pajamas with a gnarly case of bed head as I do when I'm showered, dressed, and potentially have both a workout + meditation session under my belt too.

Summer of 2014 was much happier and more productive than its schedule-free predecessors, and I've been touting the importance of routines in my work with students ever since. Some of the most valuable things I've learned about psychology haven't been collected in a graduate school classroom or absorbed through a costly textbook; they've been acquired through life experiences, and I figured it might be worthwhile to share some of these learnings on the blog.

When I first started blogging, I often incorporated psychology tidbits and wellness tips into posts, but I've found myself sticking to recipe-talk more and more in recent years. Not because I haven't wanted to talk about psychology or share a more personal perspective on wellness, but because I've actually developed a bit of stage fright as the blog has grown. And although Blissful Basil is first and foremost a food blog, psychology has, continues to be, and will always be an insatiable passion of mine.

Since I'll be taking a leave of absence from my position as a psychologist this upcoming school year, I've realized it will be especially important to have an outlet for this passion (and a space to share all those long-winded, occasionally rambling thoughts of mine).

With that in mind, I have two hopes for the future: 1| That I can release some of this accumulated stage fright and get back to sharing more personal thoughts, learnings, and ideas through writing; 2| That you'll be open to the idea too.

And no matter what, there will always be plenty of deliciousness in tow. Deal? 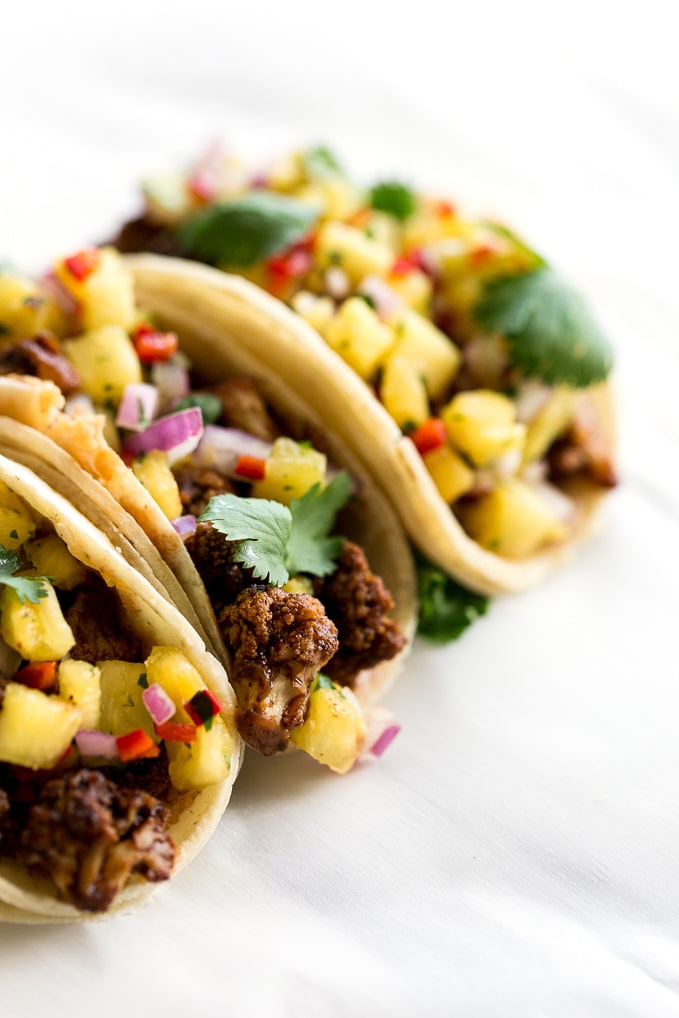 Cauliflower florets are roasted, tossed in a flavorful combination of spices, and simmered in barbecue sauce until tender. Then, they're tucked into warm corn tortillas with homemade pineapple salsa, a few sprigs of cilantro, and a spritz of fresh lime juice.

The smokiness of the spiced BBQ cauliflower complements the sweetness of the fresh pineapple salsa, yielding an irresistibly summery combination that satisfies. 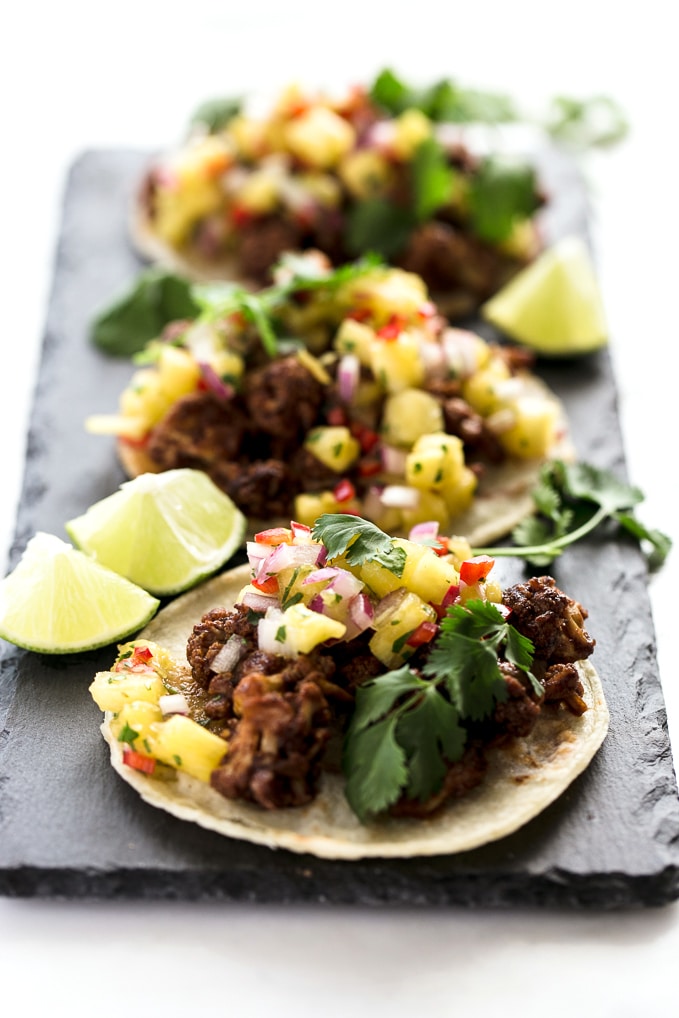 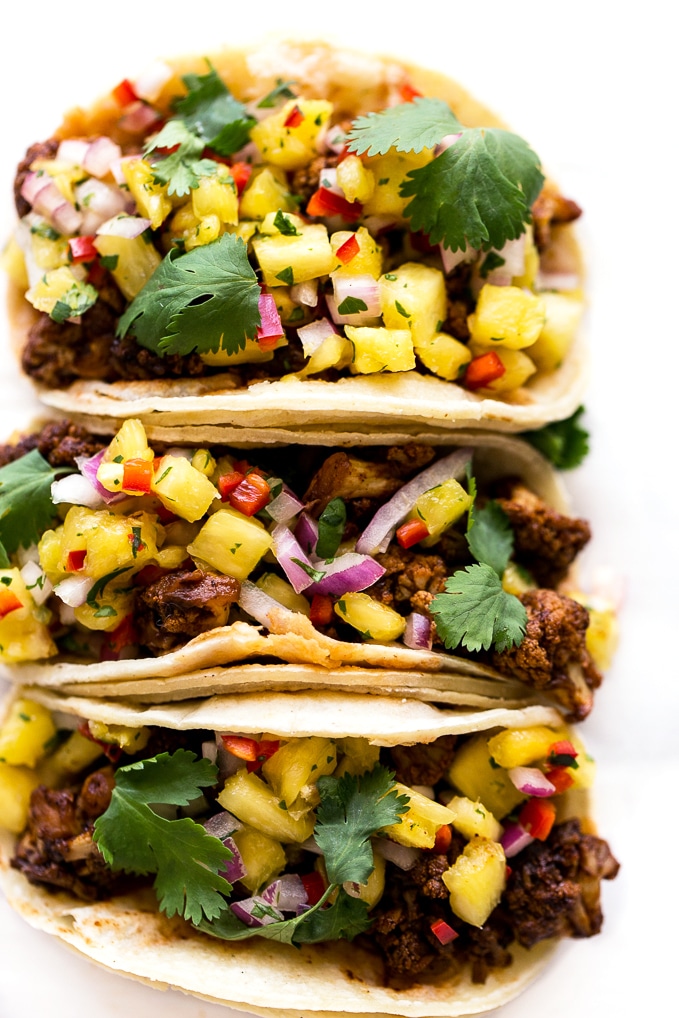 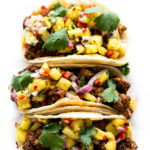 For the BBQ Cauliflower

For the Pineapple Salsa

*For a mild version of this salsa, use 1 cored, seeded, and finely diced red bell pepper instead.