This vegan Nutella fudge is simple, chocolaty, and bound to become a household Halloween staple. Requiring a short list of ingredients and less than 30 minutes of leisurely prep, it's too simple, easy, and delicious to miss. 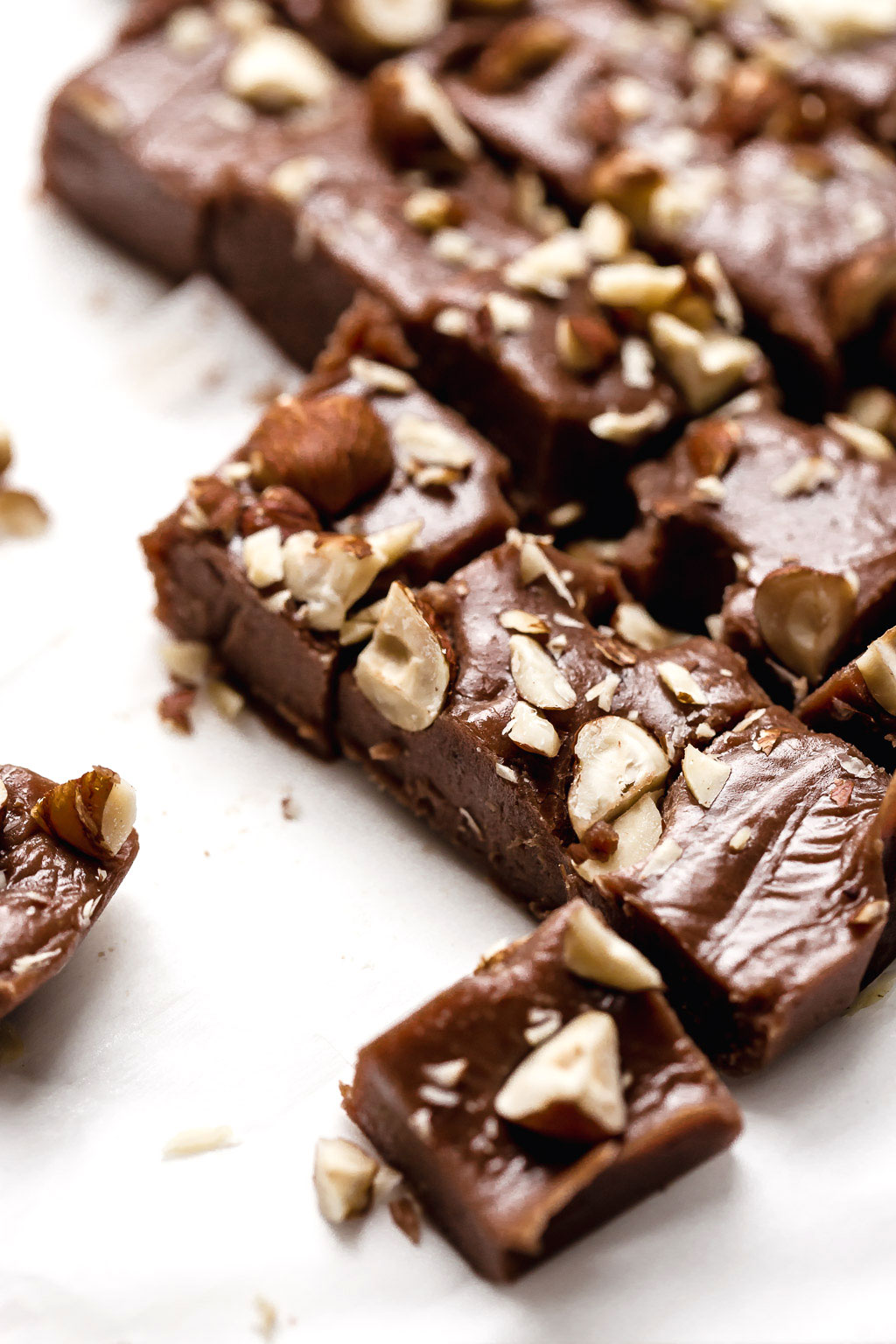 A quick life update before we get into the heart of this decadent recipe:

If you read this post, then you're up-to-speed on the ups and downs of our childcare situation. We still haven't found a long-term temporary nanny, but we're now searching through an agency who is hopeful they'll find someone soon (we gave up on care.com).

In the meantime, we've had sitters filling in on M, T, TH, and F mornings. While this allows me consistent time to work, my work days are cut short by about 2 ½ hours (depending on how long Sloane naps), which equates to a 10-hour slice out of my weekly work hours.

It's been tough to get everything done, but I'm making do and staying hopeful.

The time crunch has been especially notable these last two weeks as we've been ramping up work on The Good Space—we launched our website today.

If you have a moment to check it out, please do, especially the 'blog' section. We've converted all 30+ email newsletters we've sent this year into full-length blog posts. In them, we share lots of personal examples and deep-dive on all sorts of topics from productivity to intuition to ego and so on.

I'm sharing this because, while I've been here a bit less than usual due to the shortened work weeks, I've been working on TGS' website a lot. And so if you're missing me like I'm missing you, please hop over there to read, comment, etc. It would mean so much.

Ok, now back to yummy food.

This recipe for vegan Nutella fudge was the result of a happy accident. 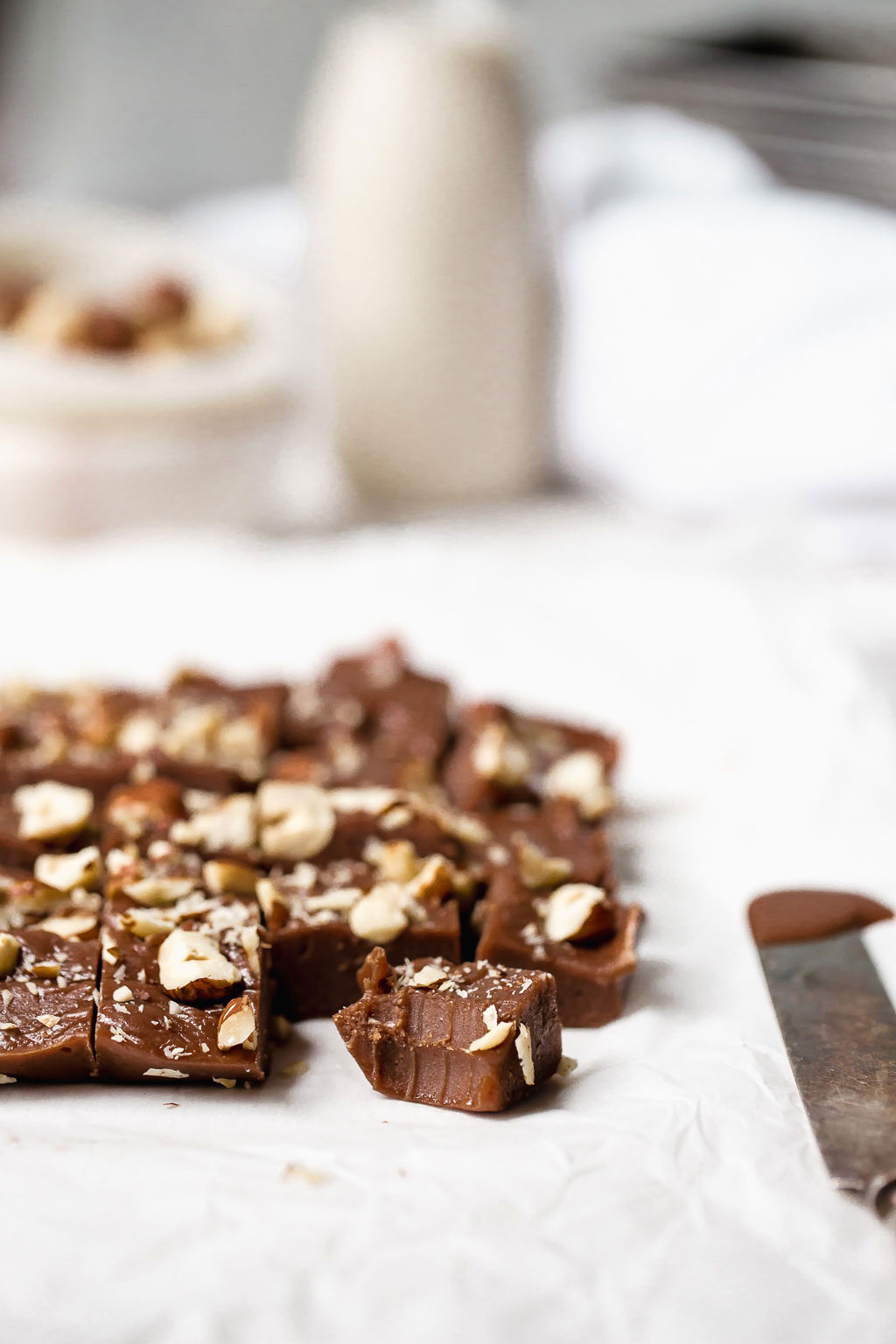 While testing frosting and glaze recipes for these cinnamon rolls, I accidentally made Nutella fudge.

I'd been aiming to make a fluffy vegan Nutella buttercream to send those cinnamon rolls sailing to decadent heights. But after several failed attempts of wacky proportions, I chucked the failed not-buttercream into the freezer, gave up on the idea altogether, and settled on a simple glaze.

I made my way downstairs and opened the pantry. No chocolate.

I opened the refrigerator. No chocolate.

I opened the freezer. Ugh, failed Nutella buttercream. And yet, it was chocolate.

I reluctantly pulled the frosty jar from the freezer, shuffled it across our kitchen island, and headed to my computer to edit a blog post as it thawed.

After 10 minutes, I returned to the kitchen, grabbed a spoon, and dug in.

To my total surprise and delight, the failed buttercream was a super successful Nutella fudge.

Thick, decadent, rich, chocolaty, nutty, a touch salty, and sweet. It reminded me of my mom's favorite fudge from The Fudge Pot in Chicago.

And so I returned to the recipe drawing board the next day and came up with this easy vegan fudge.

As they say, when life gives you failed Nutella buttercream, make  Nutella fudge. 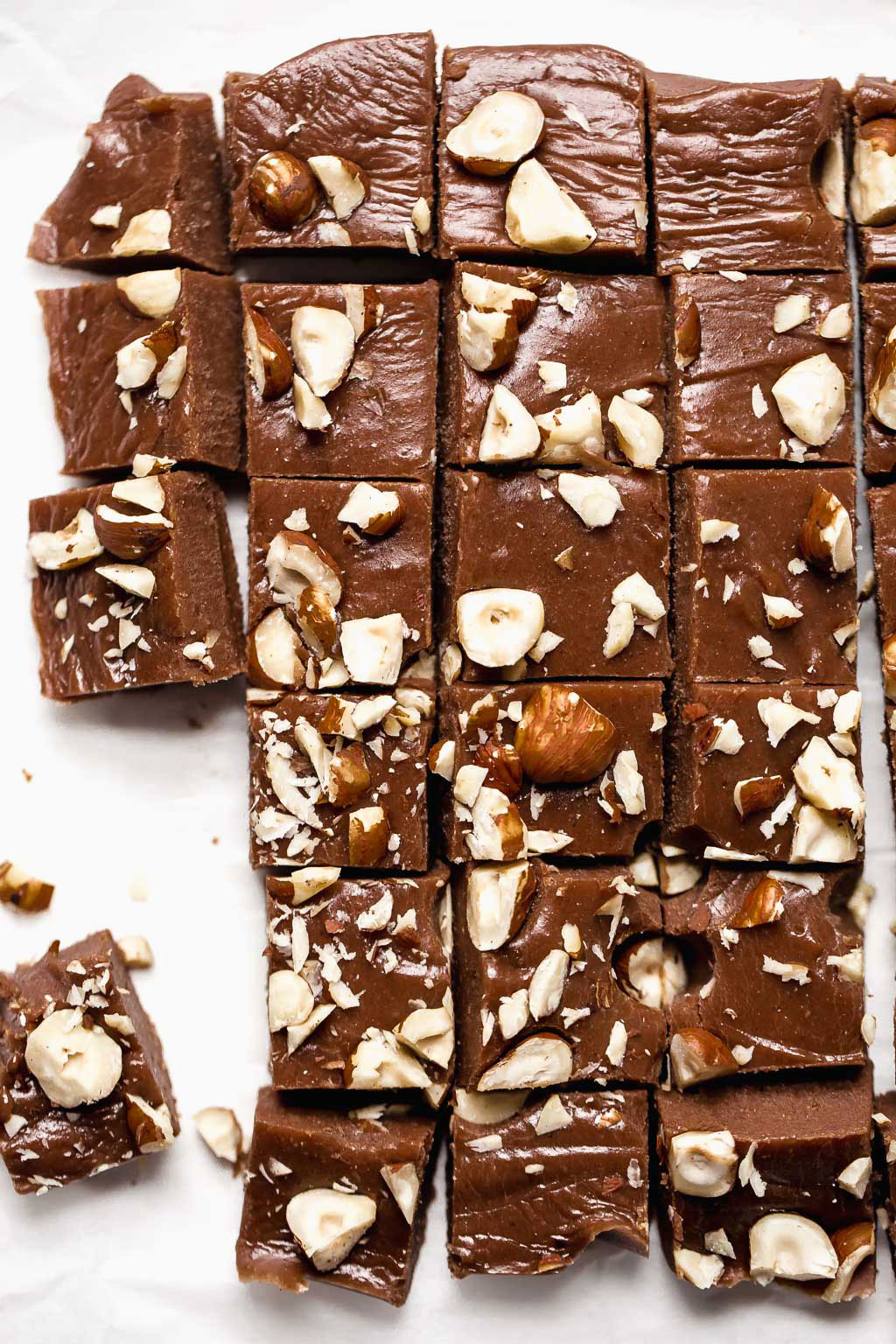 To make it, you'll start by preparing this simple homemade Nutella.

Simply roast several cups of hazelnuts until golden brown and toasty. Give them a whirl around a food processor until ground into creamy nut butter. And then blend in melted non-dairy chocolate and a pinch of salt.

Once the vegan Nutella is ready, melt a stick of vegan butter in a large saucepan.

Once the butter is melted, turn off the heat and whisk in a bit of powdered sugar.

Then, whisk in a bit of plant-based milk until completely smooth and emulsified.

Finally, whisk in ¾ cup of the homemade Nutella until smooth.

It should look like this when you're done whisking... 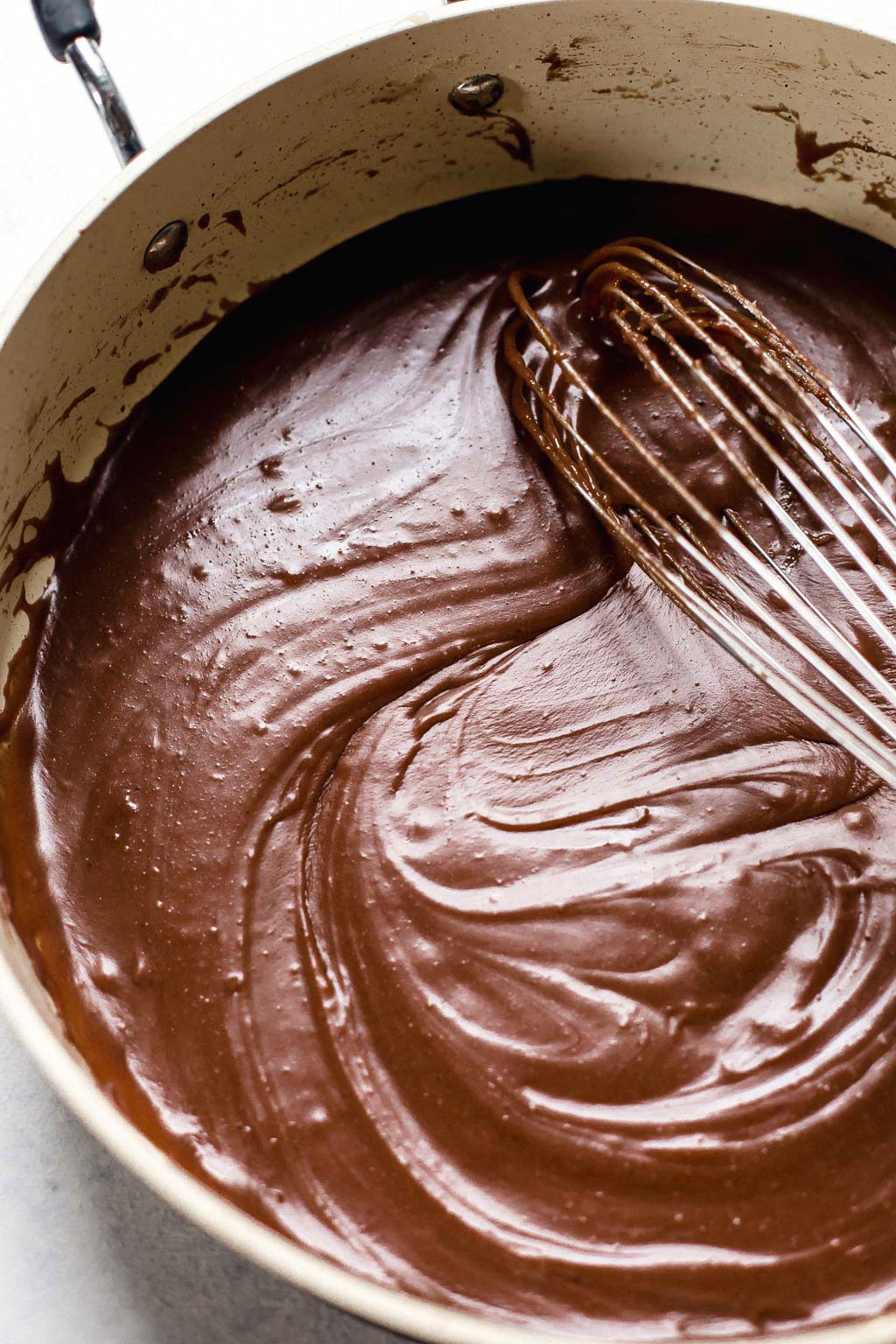 Spoon the fudge mixture into a parchment-lined square pan.

Sprinkle the top with chopped hazelnuts (if you'd like—this is optional). Then, transfer the pan to the freezer for one hour, or until the fudge has set. 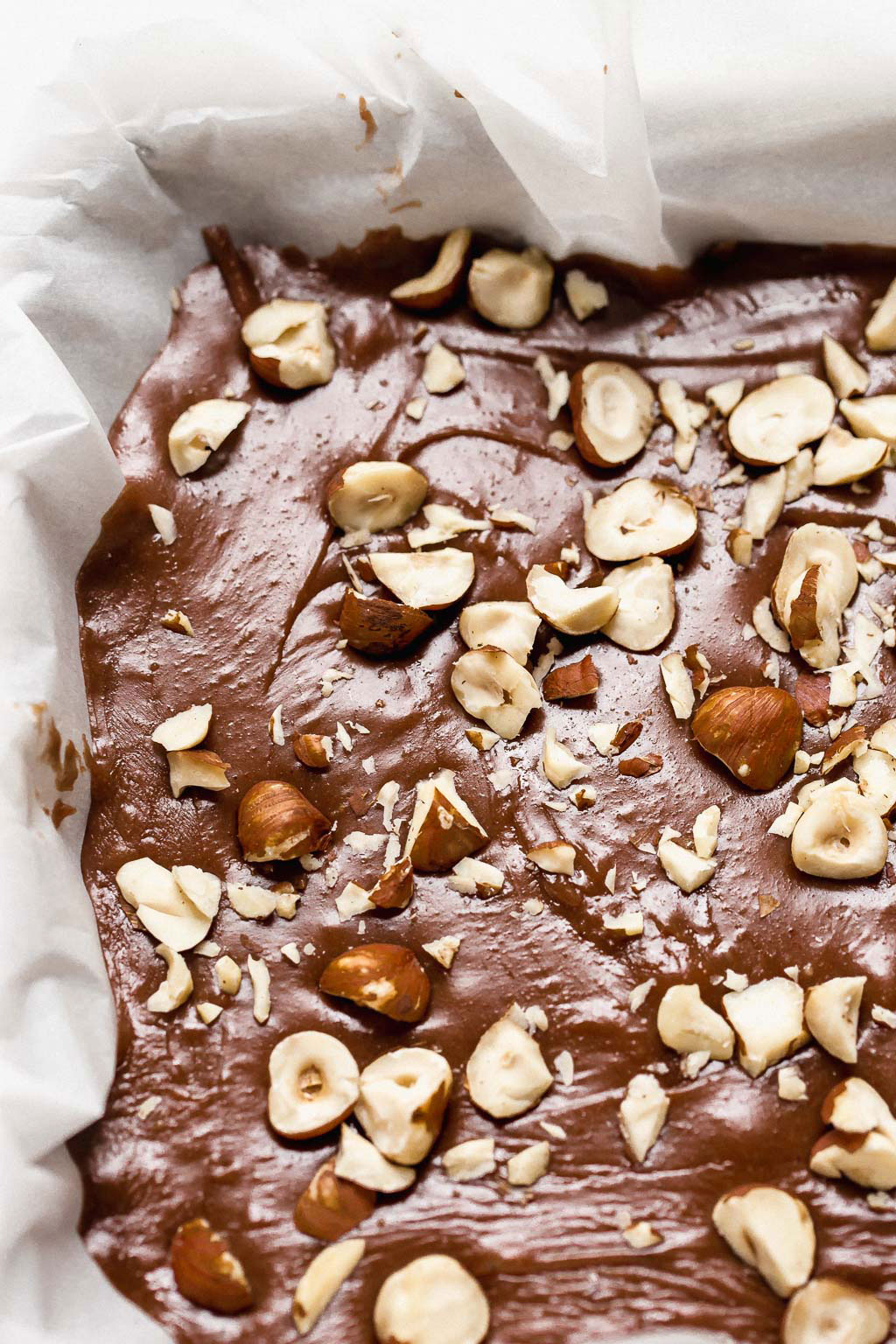 Carefully life the fudge from the pan and slice into small squares.

As is true with any fudge, this Nutella fudge is rich and decadent, so a small bite or two tends to be plenty satisfying. 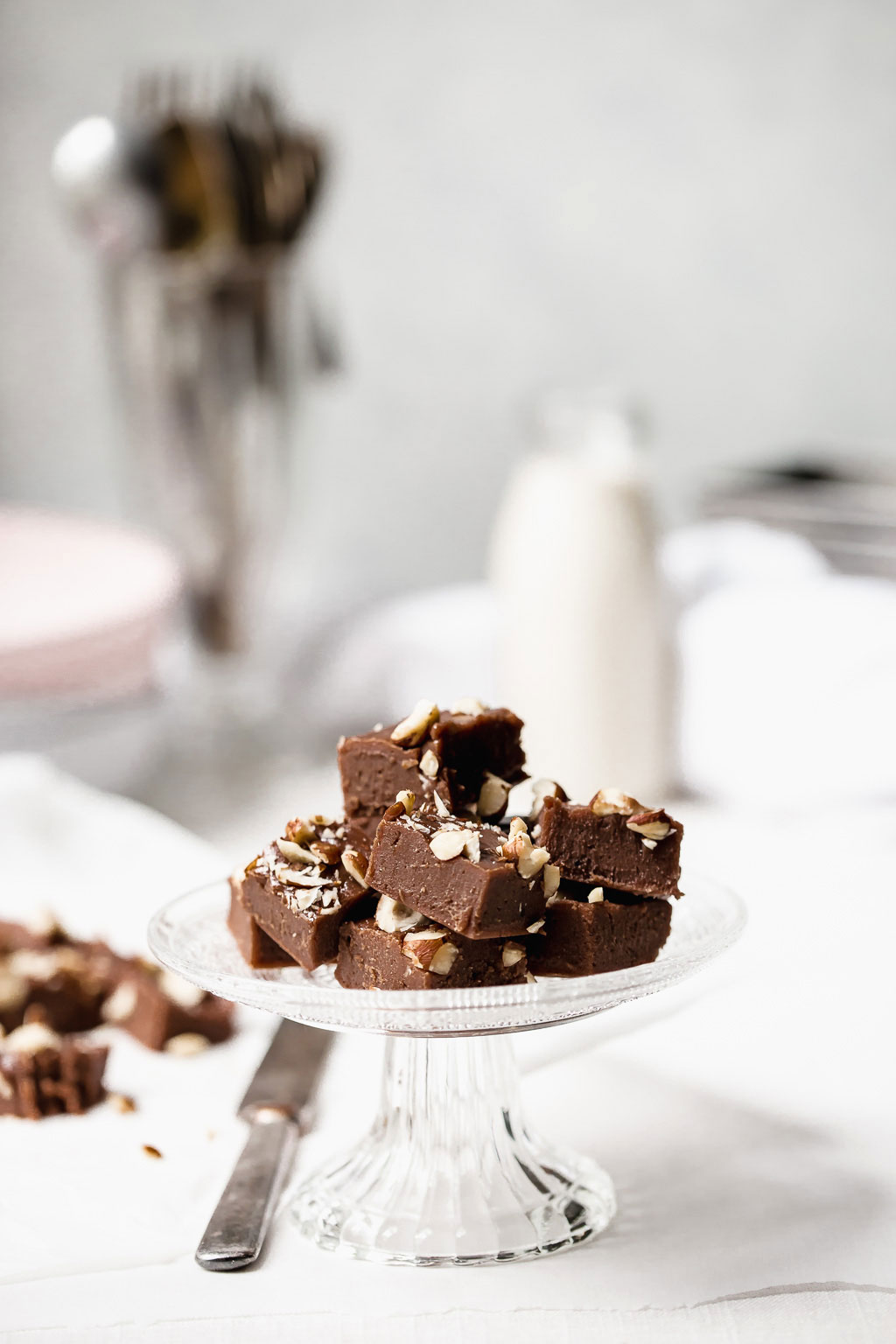 I recommend storing the fudge in the freezer and letting it sit at room temperature for 10 minutes before serving to soften a bit.

Alternatively, you can store it in the refrigerator, but I find the texture is just a touch too soft at fridge temperature. 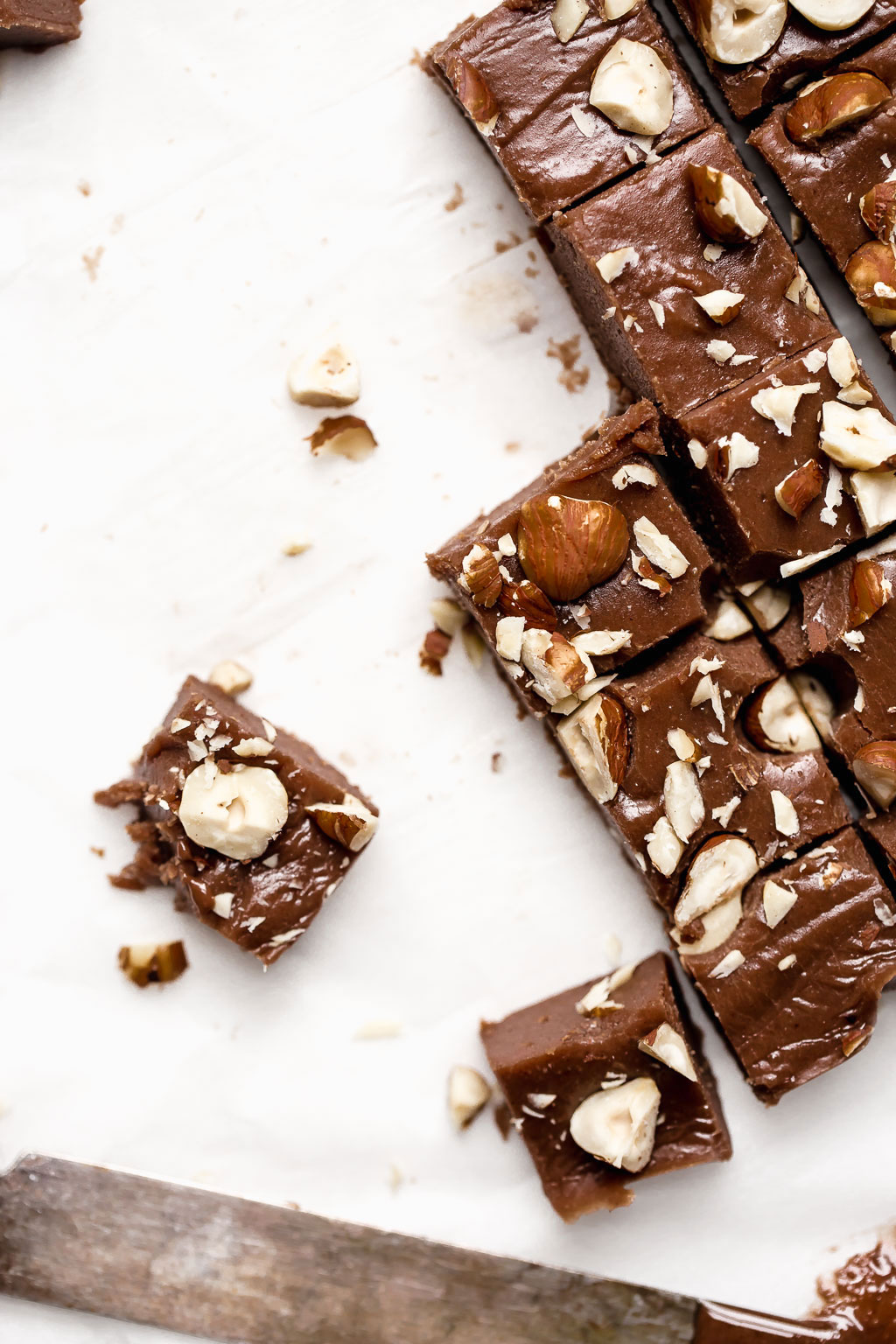 I hope you love this vegan Nutella fudge as much as I do. 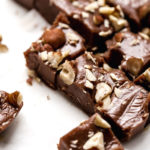