These vegan chocolate-coconut-caramel bounty slices are a dessert force to be reckoned with. Three layers = three times the deliciousness. Layers of vanilla-kissed coconut cream and dreamy vegan salted caramel are sandwiched between glossy sheets of homemade chocolate. If this isn’t the most decadent recipe on this site, it’s certainly in the top three. 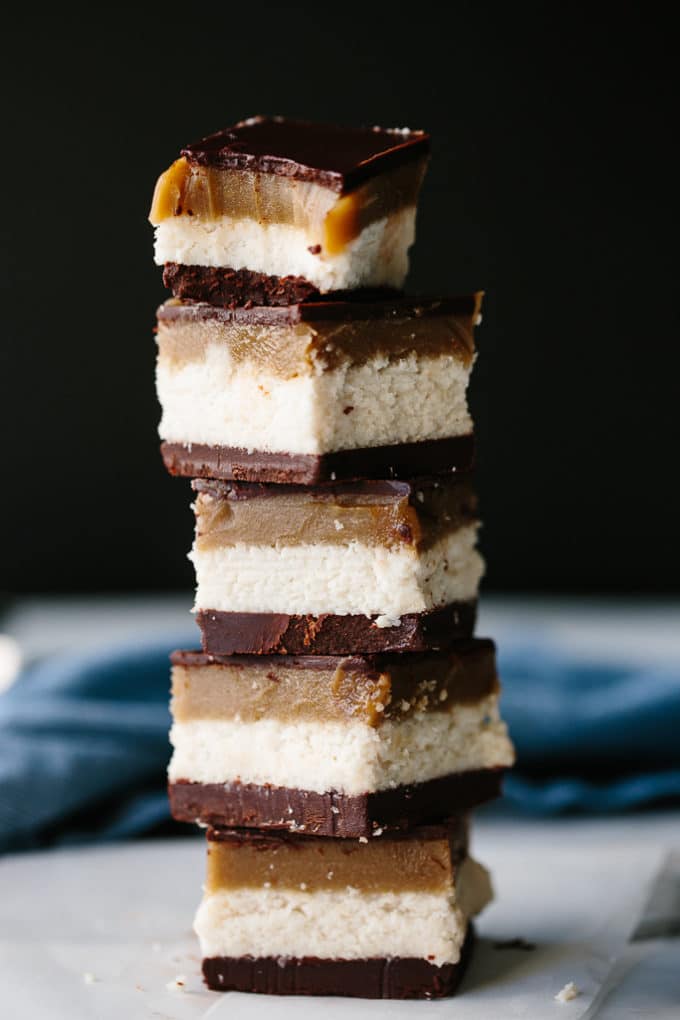 This post will go live on Friday, but as I sit here writing it's Thursday. It's not just any old Thursday though, not to me at least. To me, it's a Thursday unlike any other for the simple fact that right now, just 20 feet away from me, sit two 28-pound delivery boxes that contain real printed copies of Blissful Basil. Up to this point, every step of the cookbook process from recipe testing to editing to reviewing design proofs has been entirely electronic. I've never held a copy of the book, finished or otherwise, in my own two hands.

It took everything I had not to rip into those boxes the second they landed in our lobby, and it’s taking even more to keep me from tearing into them right now. But I’m waiting until this evening (which will be last night by the time this post is live).

Why? I realized that these circumstances and emotions may never have the chance to collide in this exact way again, and that seems like the kind of experience that is best shared with someone else. So, after I hauled 56 pounds of cookbooks up four flights of stairs, I heaved the boxes onto our kitchen counter and took a deep breath (really though, I had no choice because I was panting by that point). Then, I released my eager grip on the piece of tape that secured the top box, the one that stood between me and the books, and willed myself to hold off on opening the boxes.

So, now I wait for Dan to get home from work.

But really, after waiting two years, what’s another seven hours?

And at least there’s a fresh batch of these bounty slices tucked away in our refrigerator. All that chocolate, coconut, and caramel certainly makes the extra wait a little more bearable. 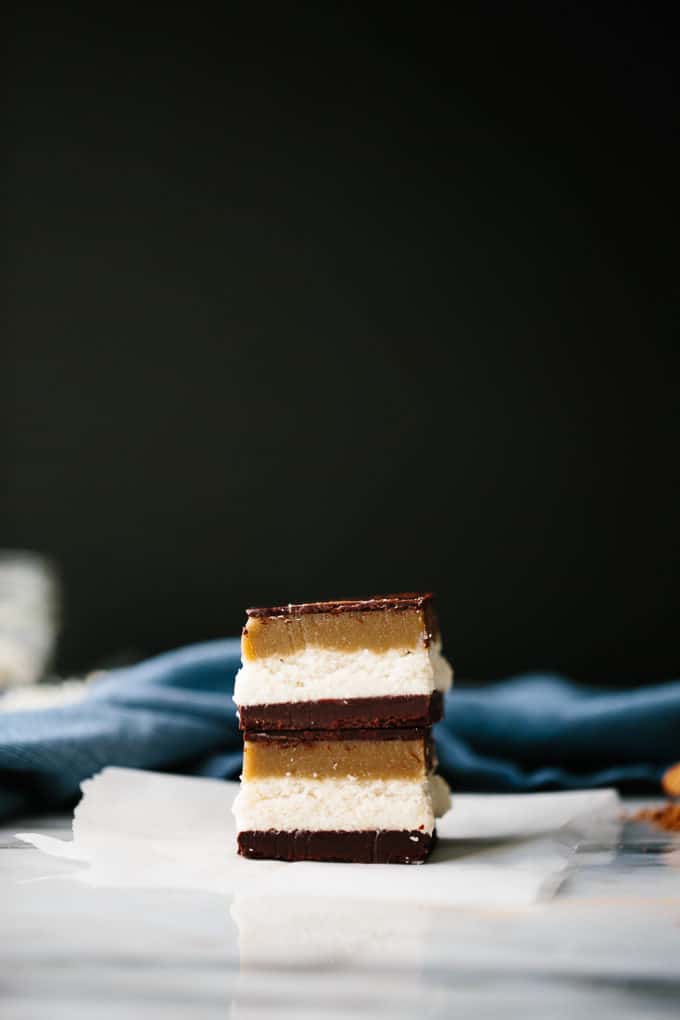 These are a coconut-infused, triple-decker spin on the chocolate + caramel slices I shared nearly two years ago to the day. They quickly became a reader favorite and have held their rank ever since. Given their popularity, I’ve been meaning to put a fun spin on them ever since and now the day has finally come.

How’s that for serendipity? For two years I waited to hold a finished cookbook in my hands, for two years this recipe waited for an update, and both of our waits are coming to an end at the same time. 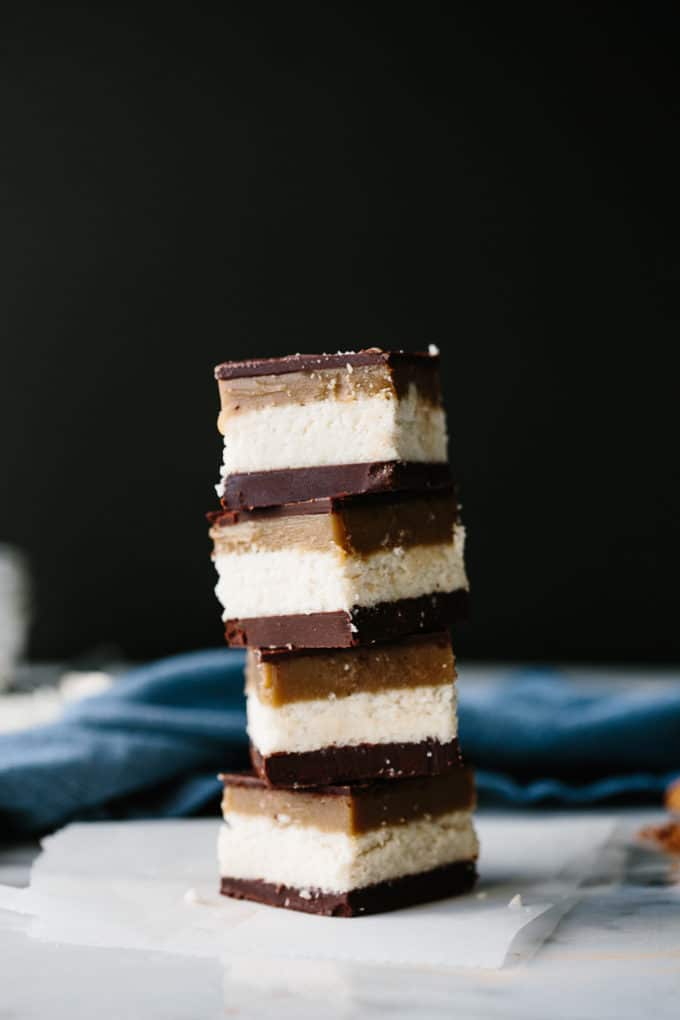 Three layers = three times the deliciousness. Layers of vanilla-kissed coconut cream and dreamy salted caramel are sandwiched between glossy sheets of homemade chocolate. If this isn’t the most decadent recipe on this site, it’s certainly in the top three.

I suppose you could say it’s one for the books...

Too much? Too much. Sometimes when I see the line between wit and cheese, I just can’t help but walk it. 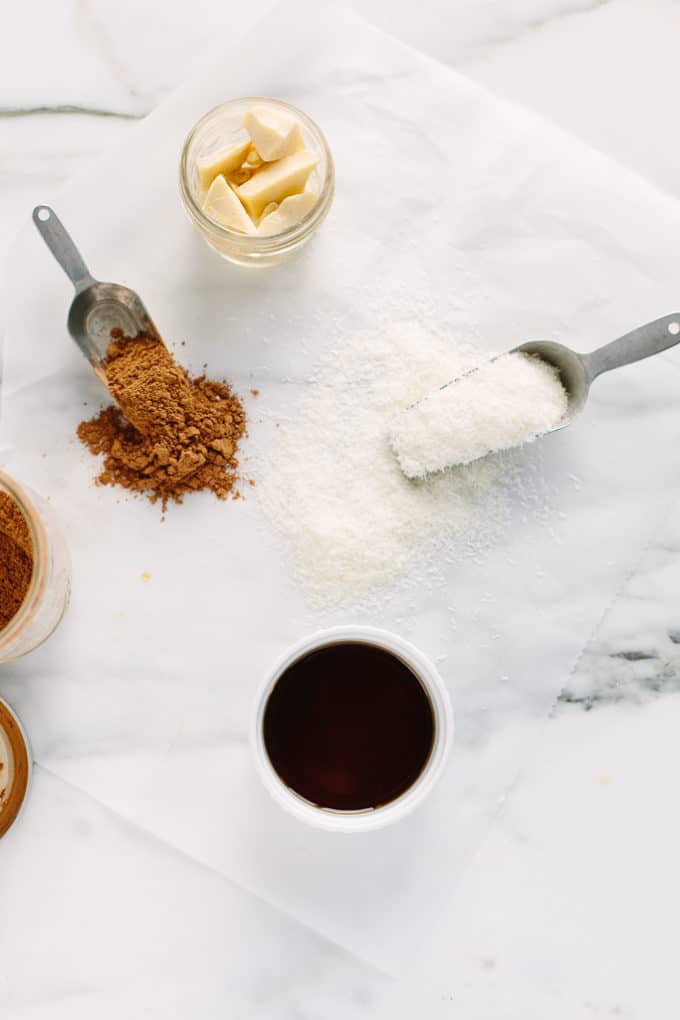 To make these bounty slices, you'll start by making a batch of homemade chocolate. Heat cacao butter and a bit of coconut oil in a double-boiler until melted. Then, whisk in a heap of cacao powder, pure maple syrup, and a pinch of sea salt. The mixture should be smooth, glossy, and pourable.

Pour about two-thirds of the chocolate into a lined pan, tilt the pan back and forth to evenly coat the bottom, and freeze for 10 minutes to set.

Then, get to work on the coconut layer. Add unsweetened shredded coconut, coconut milk, coconut oil, maple syrup, vanilla, and sea salt to a food processor and process until a mostly smooth, almost fluffy mixture comes to be. Spoon the coconut layer over the chocolate layer and freeze again to set.

Next, the caramel. Whip up a batch of 5-Minute Vegan Caramel and pour it over the chilled coconut layer. Freeze again, ensuring that the caramel layer is well set.

Finally, top with the reserved bit of chocolate and freeze one final time. 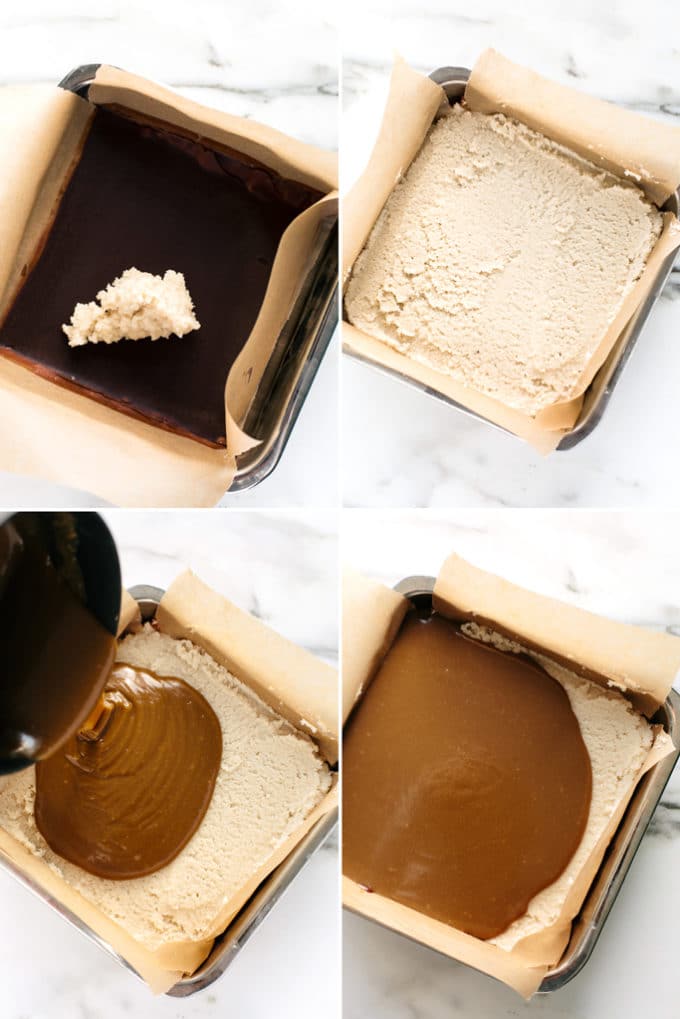 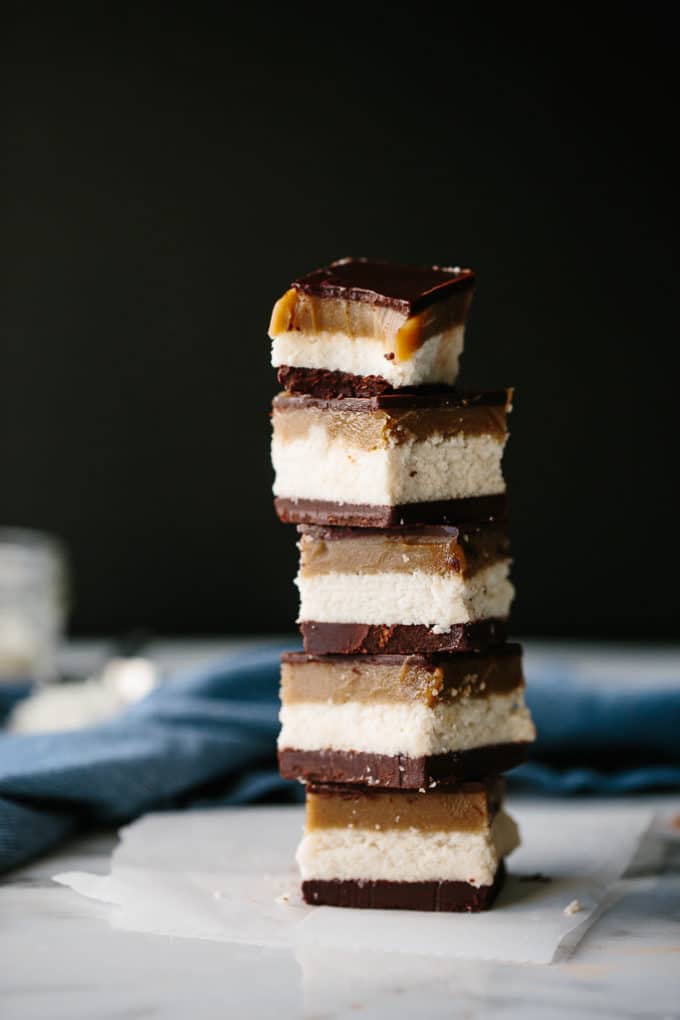 Carefully lift the bar from the pan and slice into squares.

p.s. If you happen to make a batch of these, snap a photo and tag #blissfulbasil so I can see too! 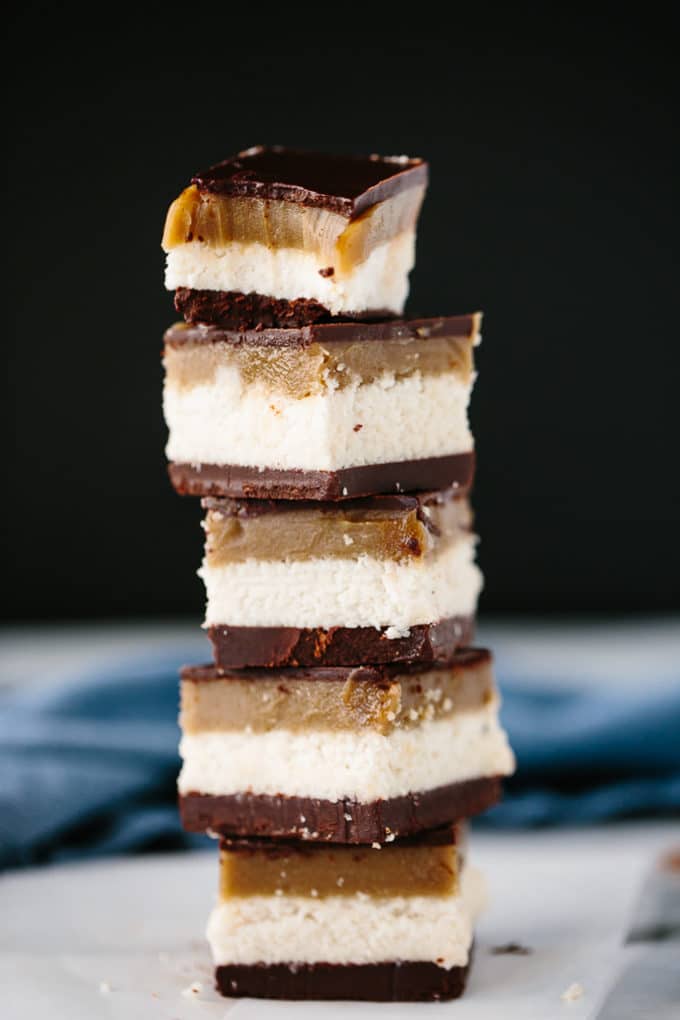 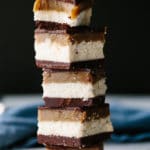 For the Homemade Dark Chocolate Layer

For the Creamy Vanilla-Coconut Layer

For the Caramel Layer

*Coconut layer inspired by My New Root's epic Raw Bounty Bars. **For the 5-Minute Vegan Caramel, I used sunflower butter in the caramel instead of almond butter to yield a smoother, glossier caramel layer.