These vegan nutella cinnamon rolls are a chocolaty brunch dream. Pillowy swirls of dough are filled with vegan nutella and cinnamon-sugar. After being baked to perfection, the warm buns are generously drizzled with a simple nutella glaze and sprinkled with hazelnuts. 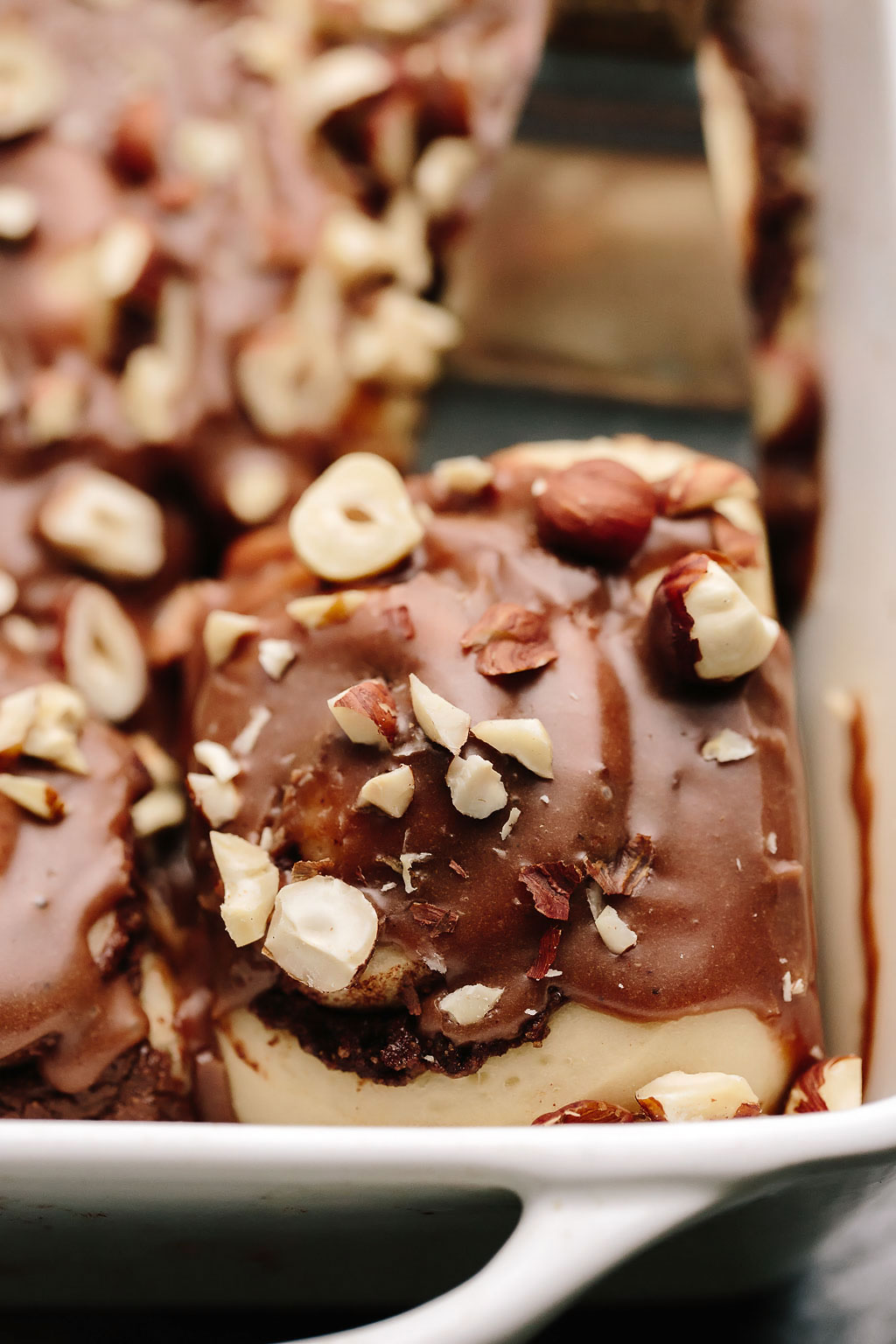 Oh my goodness, I've missed you all!

I had no intentions of a two-week lapse between posts. I would have warned you had I known. 😬

Long story short: I had another post that was supposed to go live this week, but I'll spare you the boring details on why it's delayed. Anyway, that post (a savory entree recipe) will go live next week, but I didn't want to leave you hanging until then.

So I decided to bump this recipe's release up by a week.

Did you need to know all that backstory? Probably not, but I have a smidgen of guilt for accidentally going MIA.

Of course, the only hiccup with sharing this recipe early is that you're now receiving two cinnamon roll recipes back-to-back.

Is that a problem? Not in my world.

But I suppose if you don't like cinnamon rolls or find them too fussy to make, then it could be a problem in yours. If that's the case, then the bright side is that I probably won't share anymore cinnamon roll recipes this year.

I have recipes mapped out through November, and not a cinnamon roll in sight after these beauties.

Alright, onwards and downwards to these vegan nutella cinnamon rolls... 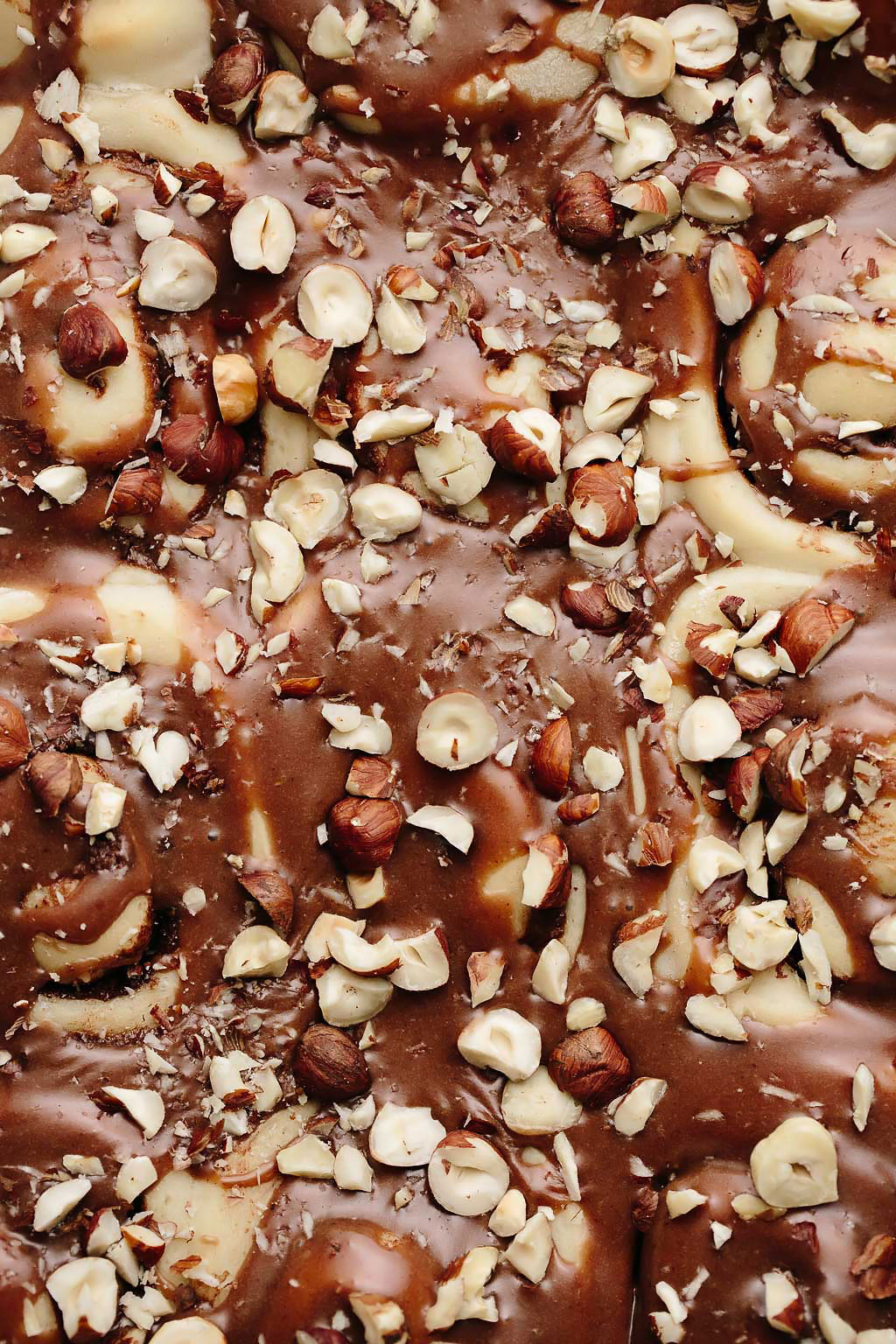 If that isn't a field of chocolaty, nutty goodness, I don't know what is.

Or a lotta messy if you have a toddler. 🙋🏻

If you've made any of my other cinnamon rolls—like these funfetti rolls or these pumpkin pecan rolls—then you pretty much know the drill for these.

The recipe is straight forward and easy to follow, but does require the typical double-rise situation. Once before rolling out, once after.

Thankfully, these rolls can be prepared ahead of time and then baked up to 24 hours later, making it totally possible to have gooey cinnamon rolls at the ready for a crack-of-dawn Sunday brunch.

Promise me you'll make them? They deserve your love and attention and you their's. 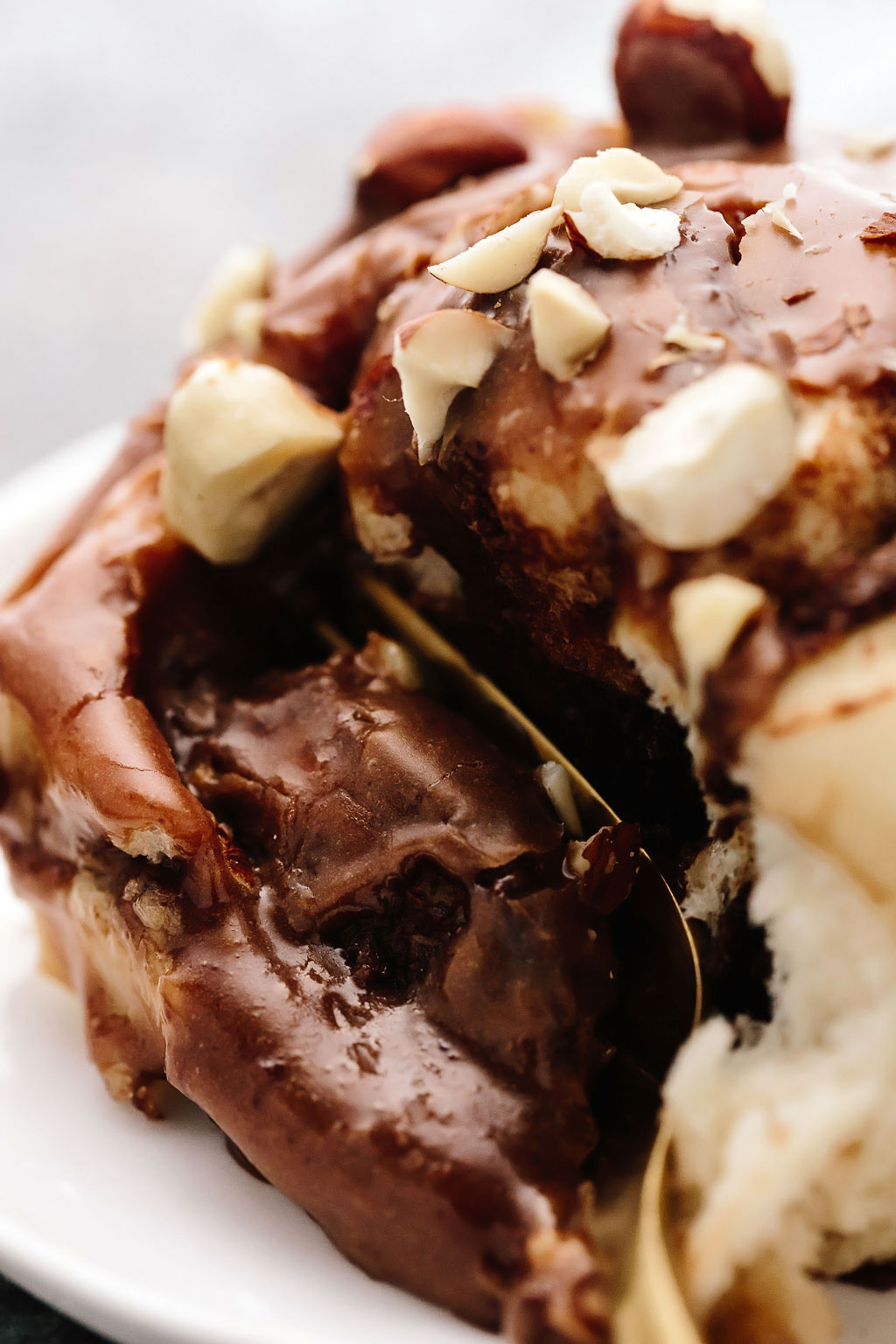 To make them, you'll start by preparing the dough.

Whisk together warm water, yeast, and a bit of cane sugar. Let the mixture stand for several minutes, or until a foam develops on the surface.

FYI, it's important to make sure the water is warm enough but not hot. 105F to 115F is the sweet spot. Too cool and it won't activate the yeast, too hot and it'll kill it.

Point being: Allow the yeast to thrive by providing it with a cozy, but not too cozy, environment. 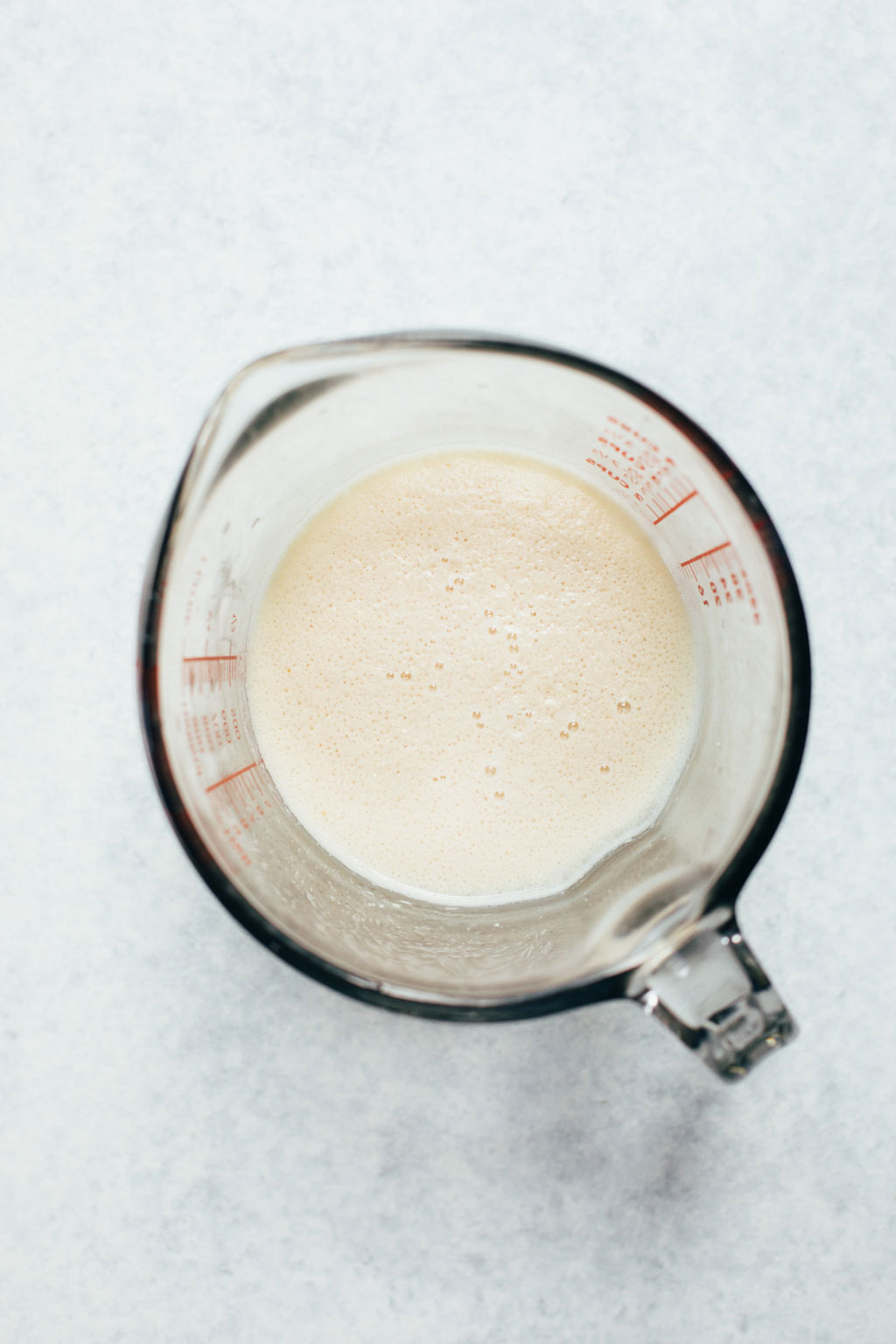 While the yeast activates, flour a clean work surface and prepare two mixing bowls—one for mixing and one for rising.

Whisk together all-purpose flour and salt in one of the mixing bowls.

Then, melt a bit of vegan butter in a saucepan. Once it's melted, remove the pan from the heat and whisk in unsweetened plant-based milk, and a bit of cane sugar.

Pour the butter mixture into the bowl with the flour and then add the activated yeast mixture.

Stir, stir, stir using a wooden spoon until the flour has been incorporated. Then, turn the dough out onto the floured surface, and knead for 8 to 10 minutes, or until smooth, elastic, and springy.

If you have a stand mixer with a dough hook, you can start mixing and kneading the dough using that and then finish it with several minutes of hand kneading. Just be sure to watch your mixer since the dough is very thick—mine will shimmy its way off the counter if left unattended.

And no one needs a Kitchenaid mixer smashing onto a floor (or heaven forbid a toe).

True story: 15 years ago, I dropped my parents' Kitchenaid mixer on their hardwood floor and the dent/gash remained until they had their floors refinished this year. 🤦🏻‍♀️

I digress. Where were we?

Ahh yes, the kneading. Once you've kneaded the dough, shape it into a ball and place it in the greased mixing bowl. Then, loosely cover and move to a warm and cozy spot. Allow the dough to rise for one hour, or until doubled in size. 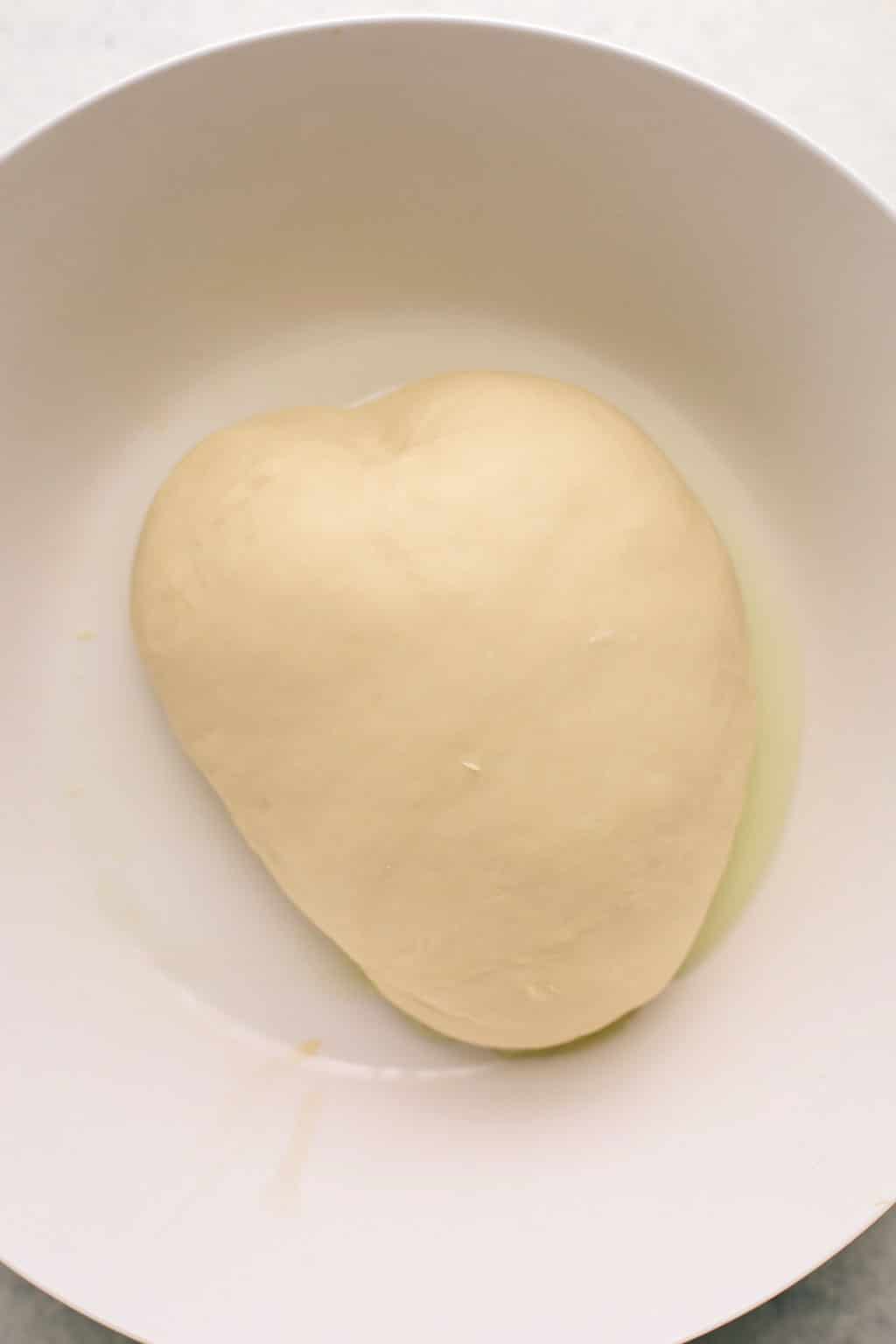 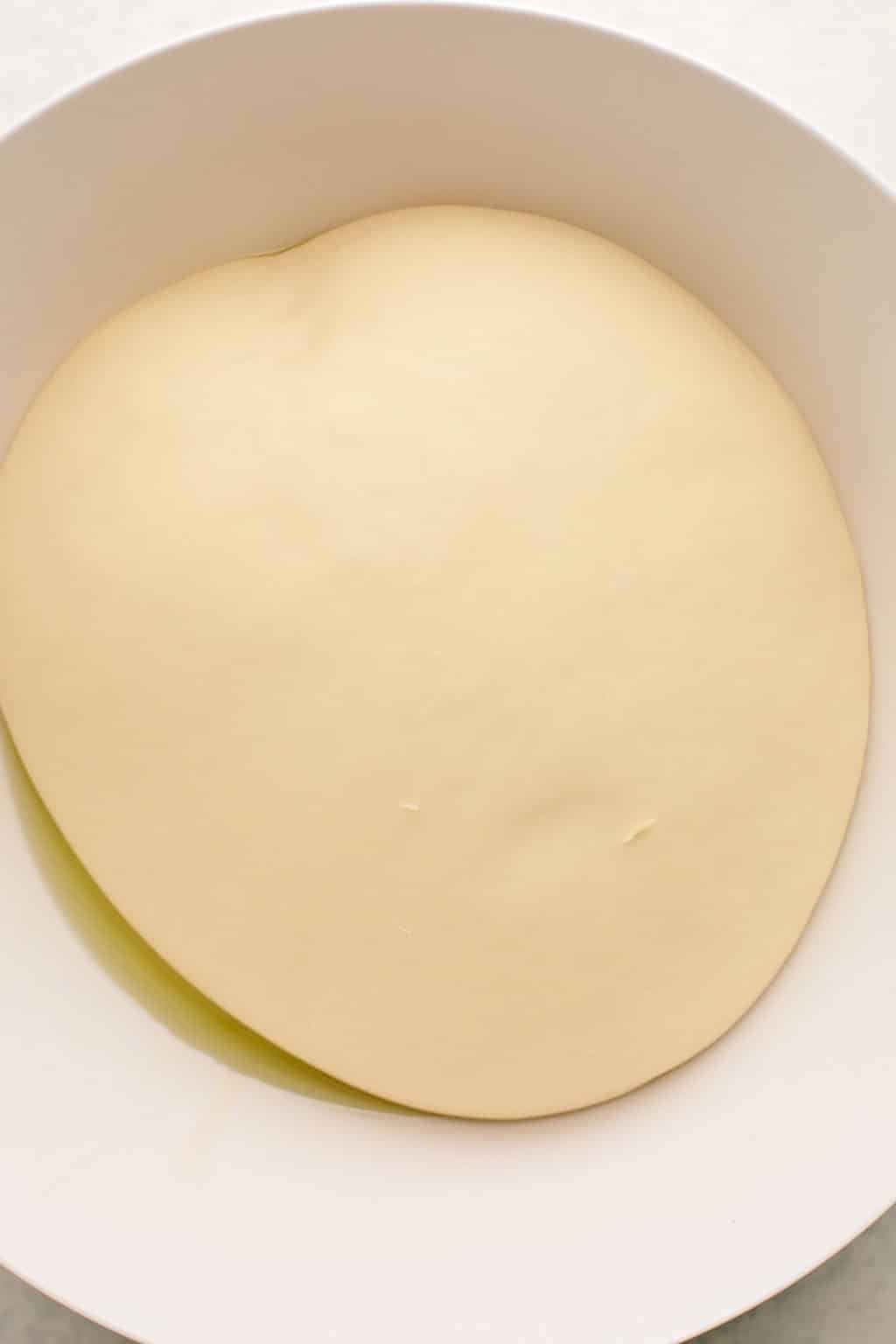 While the dough rises, prepare a batch of homemade vegan nutella. Sounds fancy, I promise it's not. We're talking two ingredients + salt. And it's divine.

When the dough has just a few minutes left to rise, lightly grease a rectangular baking dish and whisk together the cinnamon-sugar filling.

Roll the dough out into a rectangle that's about 12 inches by 24 inches.

Pour about a half cup of the Nutella onto the rolled dough and use a spatula to smooth it into an even layer. Then, sprinkle with the cinnamon sugar mixture and chopped hazelnuts.

Carefully roll the dough away from you, capturing all of that nutty, chocolaty, cinnamon-y filling inside.

Slice into 12 two-inch-thick rolls and transfer to the prepared pan. 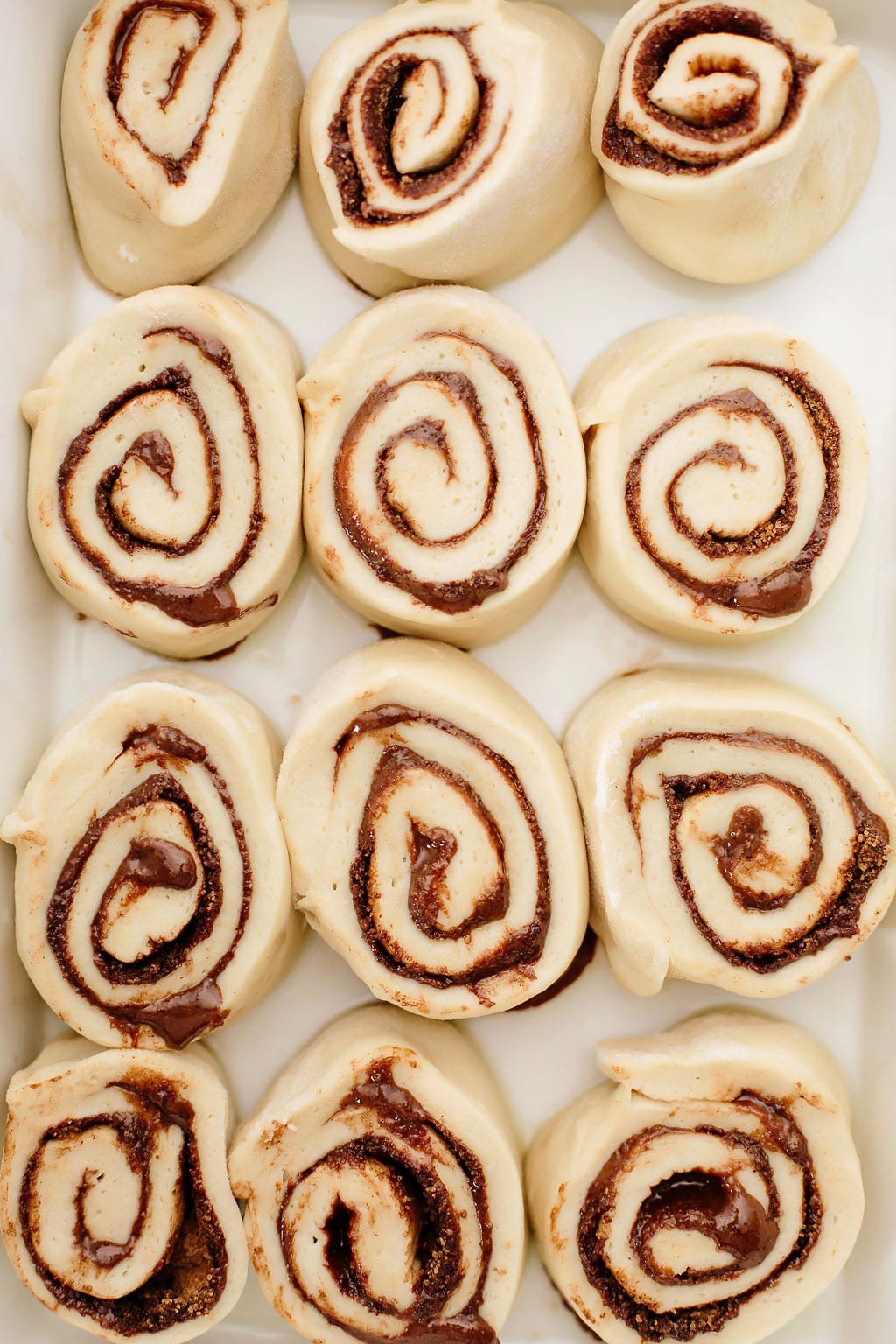 Cover the pan and place it in a warm spot for 45 minutes, or until the rolls have doubled in size. 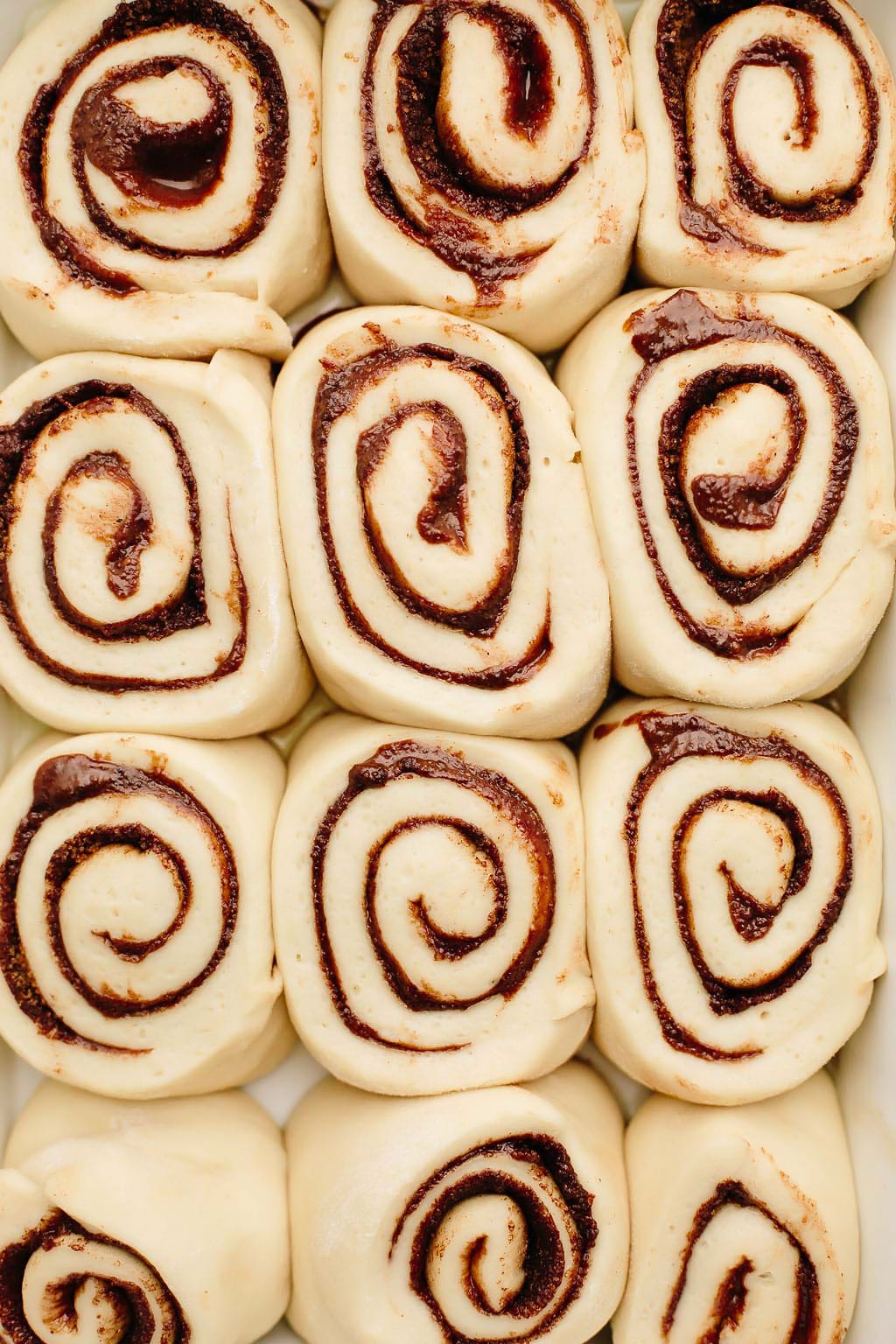 Bake the cinnamon rolls at 350F for 22 to 26 minutes, or until they're just barely turning golden and the tops feel firm to the touch. A good trick is to gently rap on the tops with your fingers. If the rolls sound hollow, they're plenty baked. 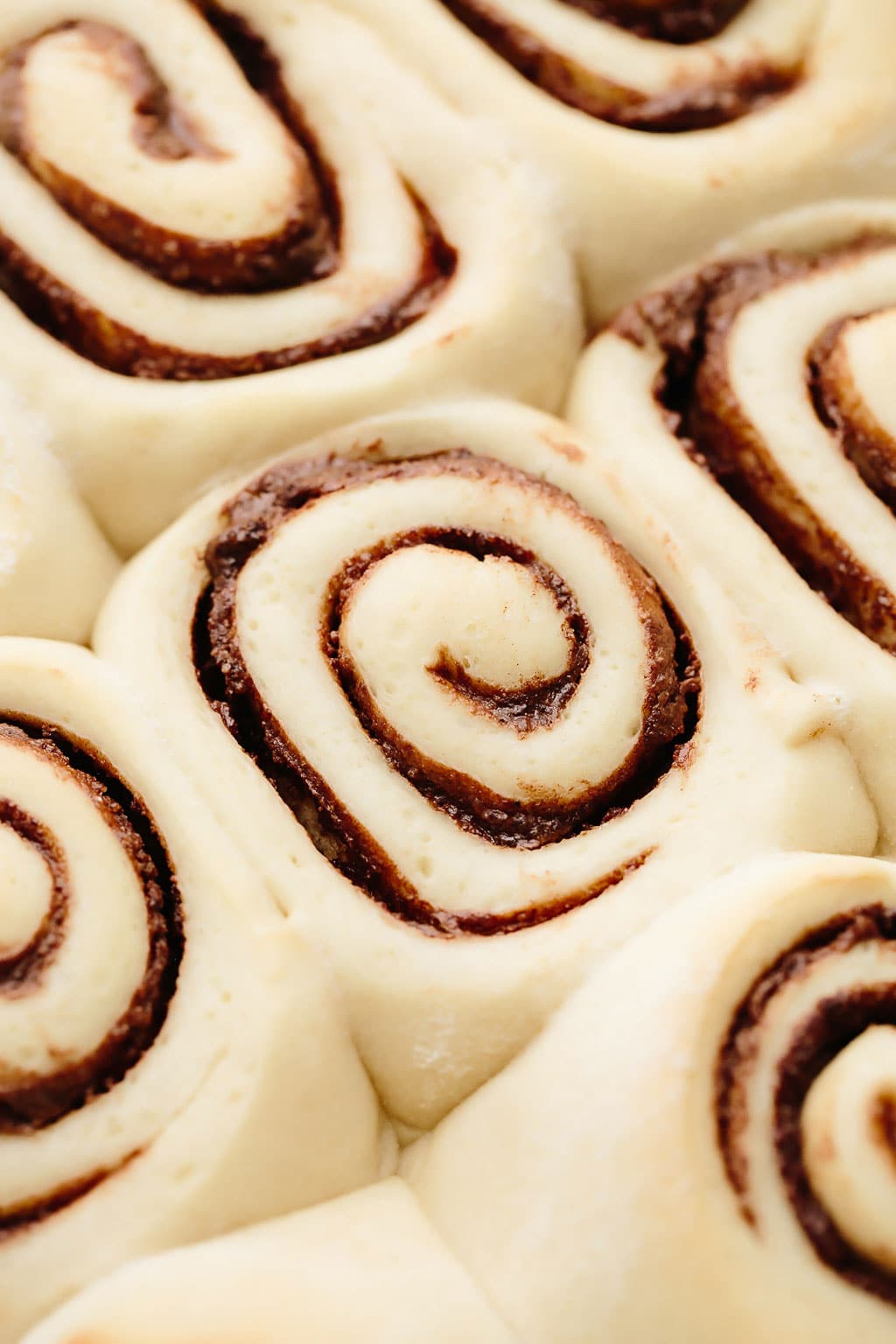 While the rolls bake, prepare the Nutella glaze.

This glaze is super simple to make.

Simply whisk together powdered sugar, a bit of that homemade vegan Nutella, and a few splashes of plant-based milk until smooth and glossy. 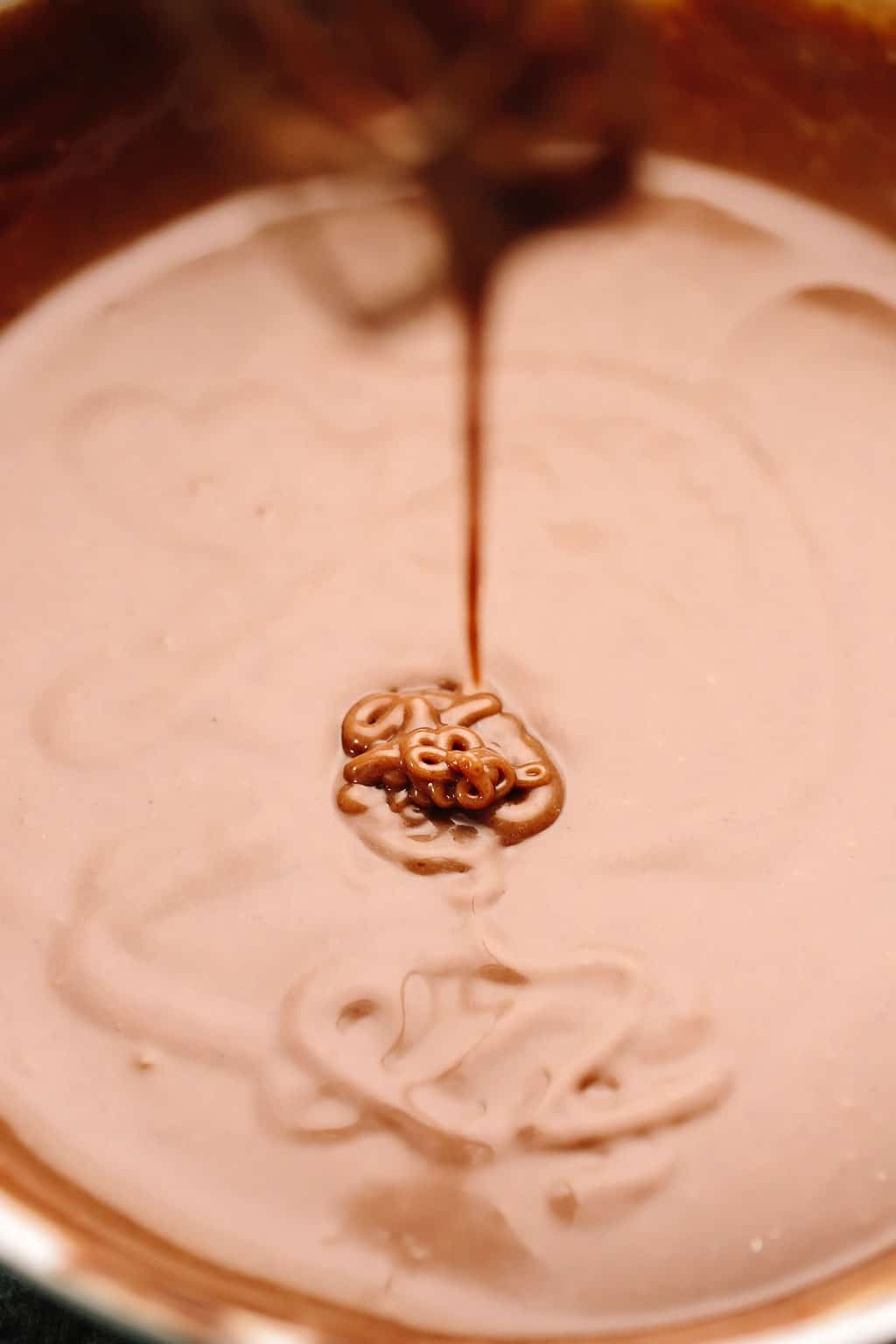 Worth noting: The glaze recipe makes a generous amount, so don't feel like you have to use it all. We do in our house because we're frosting fanatics (at least Sloane and I are, Dan isn't), but you may find it's too much.

You can ice the entire pan of warm Nutella cinnamon rolls or drizzle each individual roll with glaze as you serve them. The latter option allows more flexibility for varying icing preferences.

Once the rolls are glazed, garnish them with more chopped hazelnuts.

Can we take a moment to revel in all this chocolaty, nutty glory? 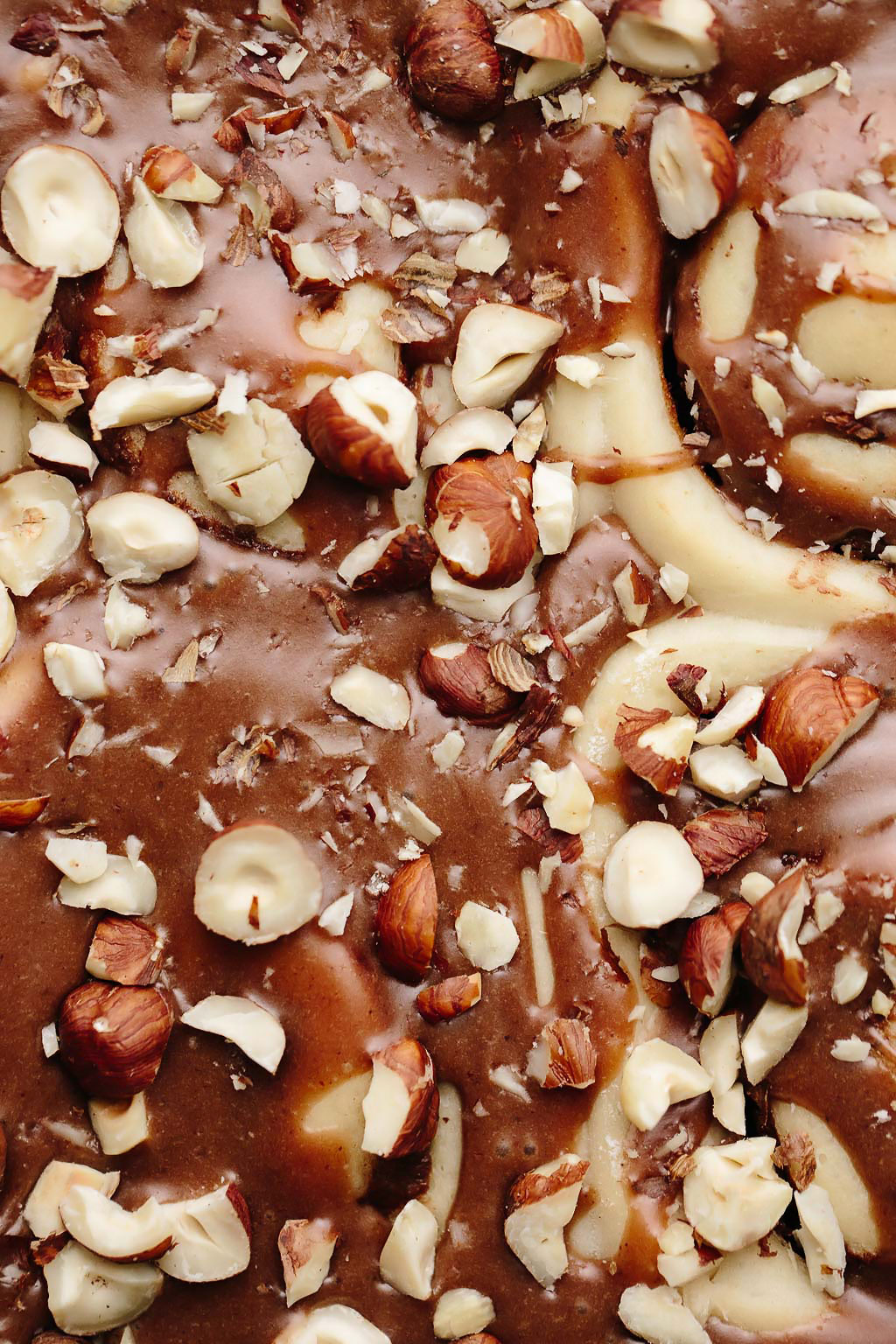 Finally, generously dish out those vegan Nutella cinnamon rolls to family, friends, and loved ones. 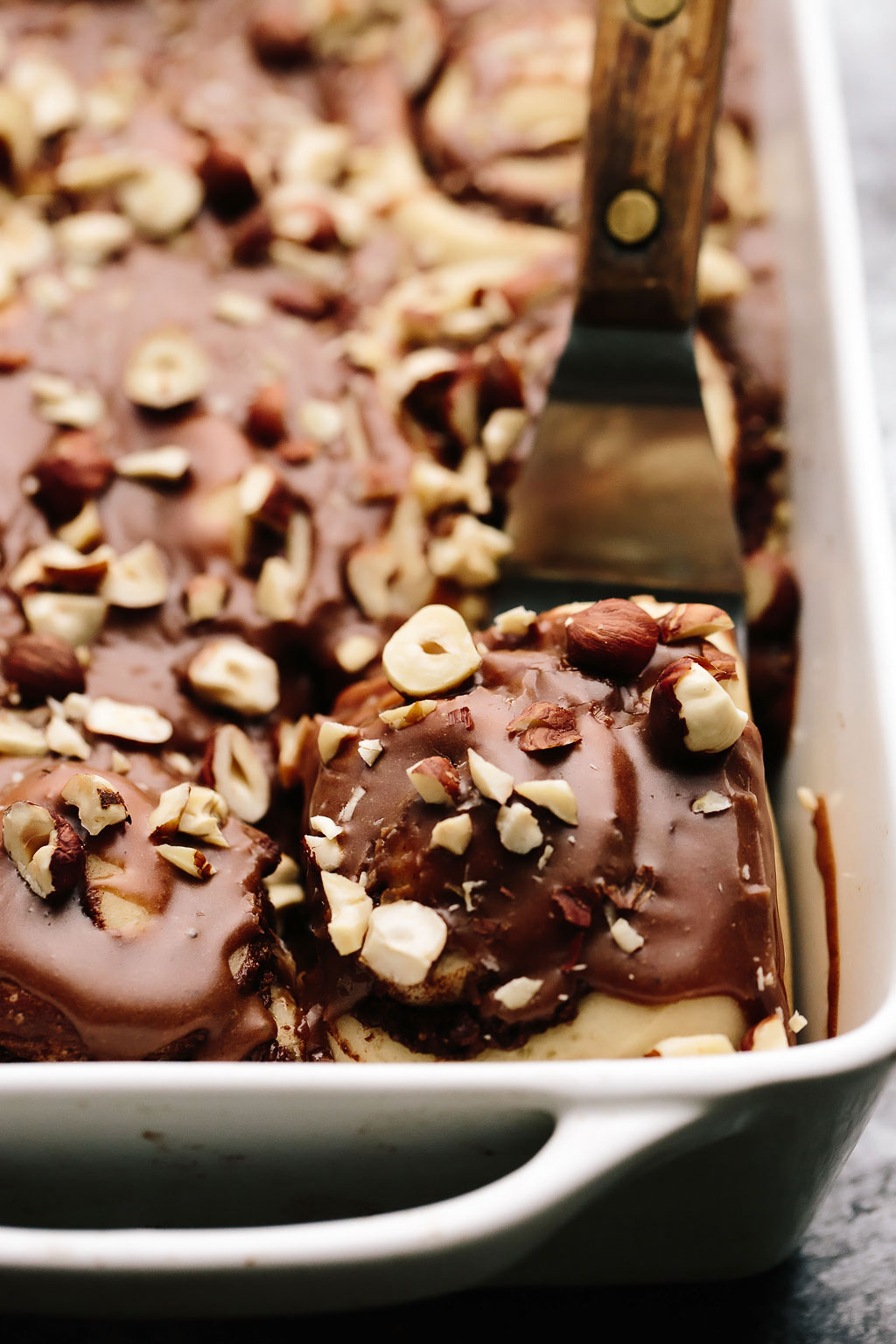 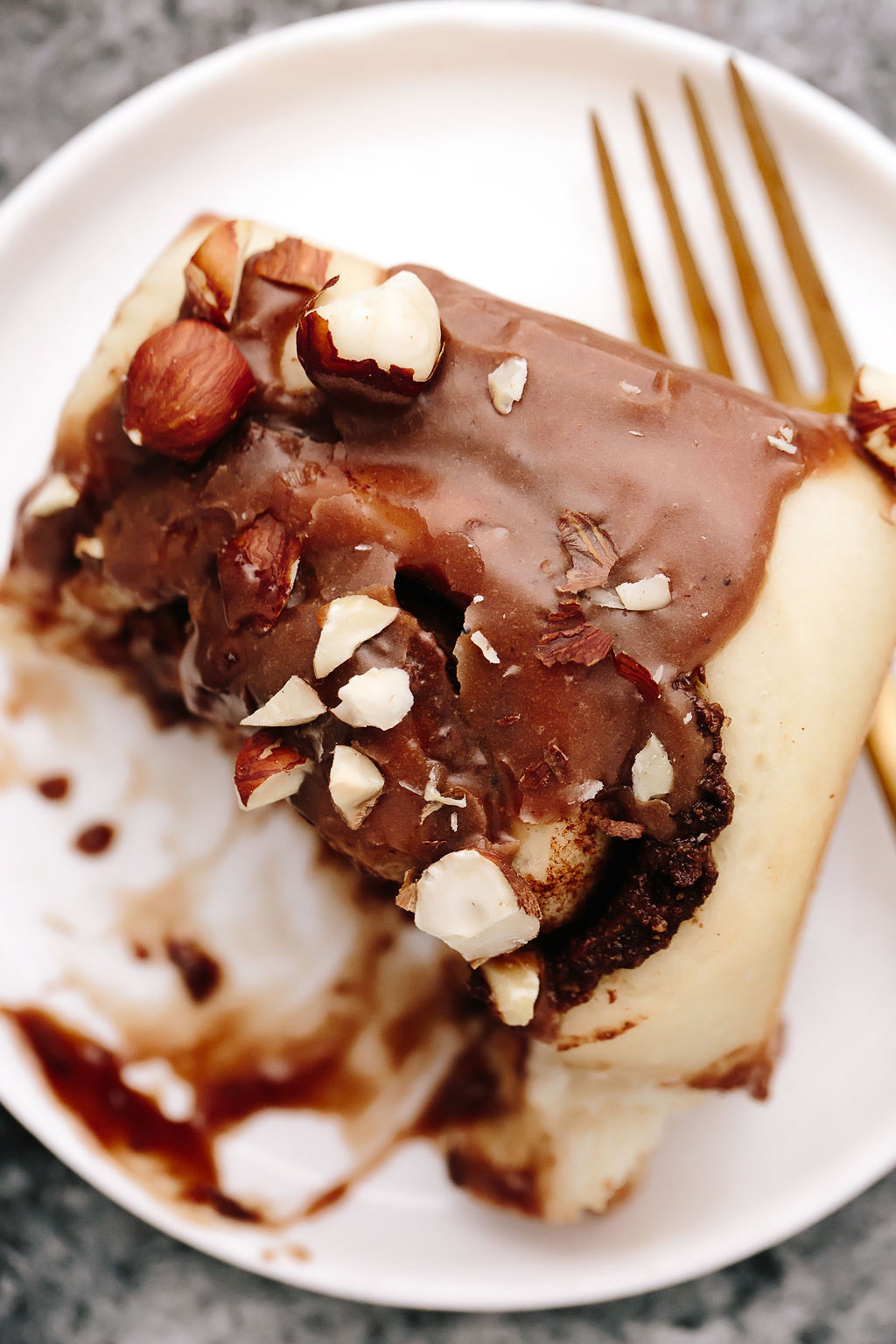 For the Nutella Cinnamon Rolls

For the Nutella Glaze

*If you prefer sweeter rolls, increase the amount of sugar in the filling to ⅓ cup or ½ cup. I typically use ½ cup sugar in cinnamon rolls but halved the amount to accommodate for the sweetness of the Nutella. **These cinnamon rolls can be prepared ahead of time and baked later. To do this, prepare the rolls through step 13, cover, and refrigerate for up to 24 hours. Then, proceed with baking and frosting as directed.