Beets are the magical touch in this moist, chocolaty, almost brownie-like just beet it vegan gluten-free red velvet cake. Other than the vibrant red hue and rich texture they lend, you'll never know they're there! Oat flour stands in for all purpose, making this cake gluten-free. A thick vanilla icing with a cream cheese like tang gets slathered on top of the red velvet cake for an added touch of sweet decadence. For an extra touch of sweetness and pop of color, I recommend topping this cake with a sprinkle of mini chocolate chips and crushed freeze dried raspberries. 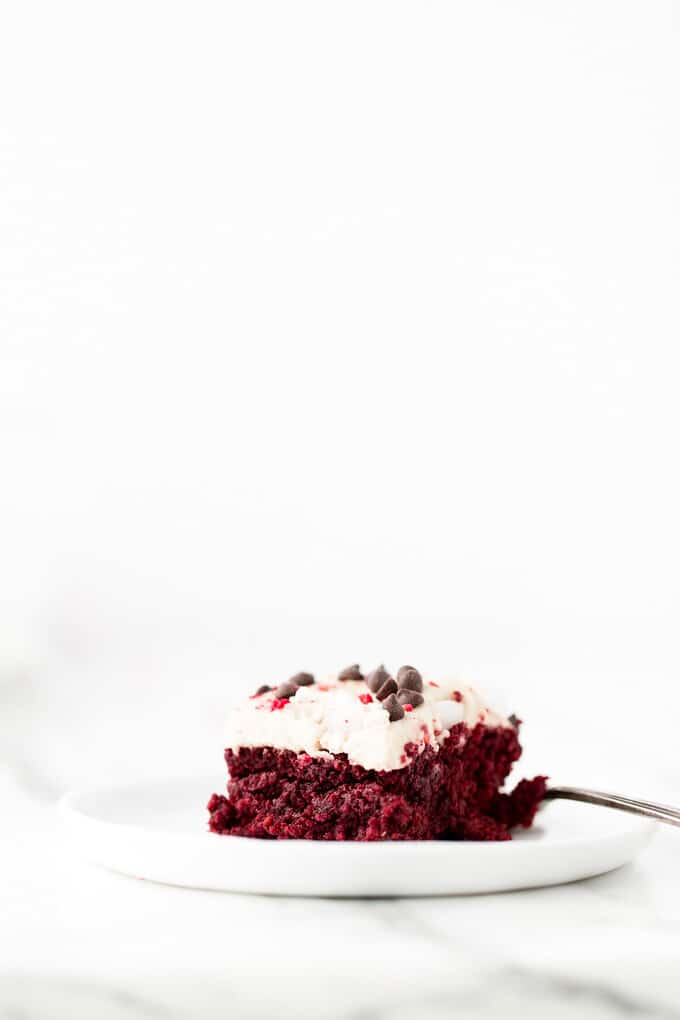 What began as a quest to make the ultimate vegan red velvet brownies spontaneously morphed into a delicious life lesson. One about joyfully embracing the beauty of what is instead of frustratedly forcing that which wasn't meant to be.

You know the type?

Those moments when our most valiant efforts coalesce into an outcome that isn't necessarily bad, just altogether different than the one our expectations had grown so fond of.

More specifically, sometimes we sow the seeds of our fudgy brownie dreams, and they bake up with fluffier, cake-like hopes of their own. 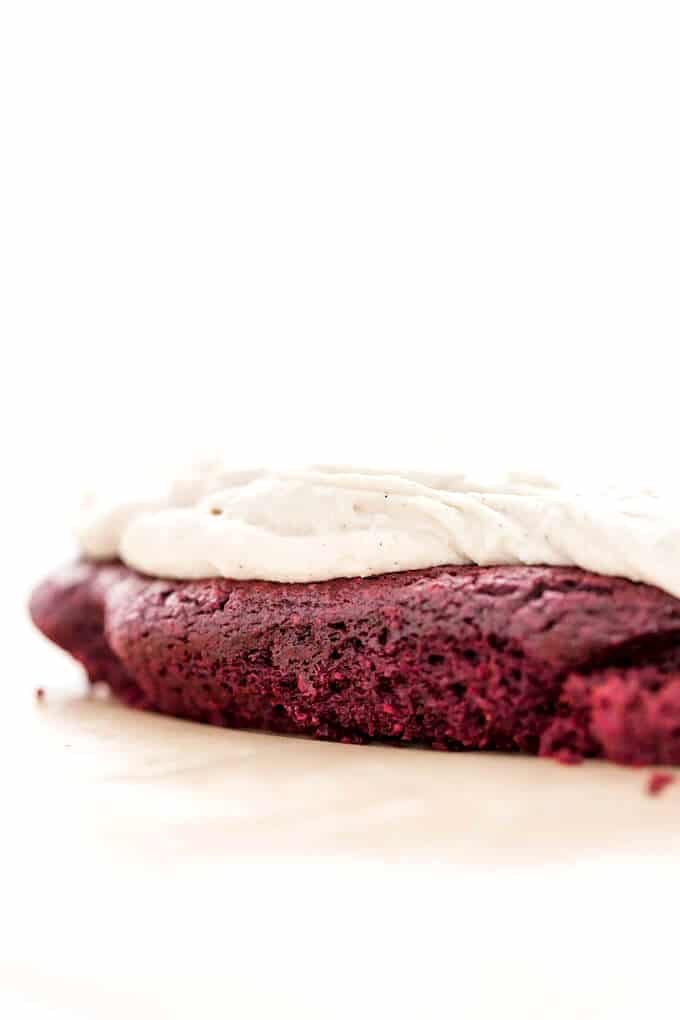 One thing's for sure: my darling little red velvet  recipe had flown the brownie coop before she'd even landed.

Sure, I could have resisted her destiny and forcefully molded the wild child back into my expectations. At the first sight of her too-fluffy exterior, I could have yanked her from the oven, escorted her to the trash, tinkered with her recipe code, and insisted she become something she clearly had no interest in being.

But she'd carved out a different path for herself, and who's a non-discriminatory dessert lover to judge?

So instead of resisting, I flowed and maintained an open, optimistic heart. And as I tasted this crimson-hued, fiercely independent cake of mine, I was reminded of something:

Sometimes the outcome we envision, the one we stubbornly chain ourselves to, pales in comparison to the outcome we receive but never knew we wanted. And it's only once we've embraced what isn't that we fully grasp the beauty of what is.

Unphilosophized moral of the story: Sometimes you expect brownies and receive damn good cake instead.

This vegan, gluten-free red velvet cake is a wonderful, and might I add tasty, reminder of the sweet surprises that present themselves when we effortlessly flow with what isn't instead of resisting what is. 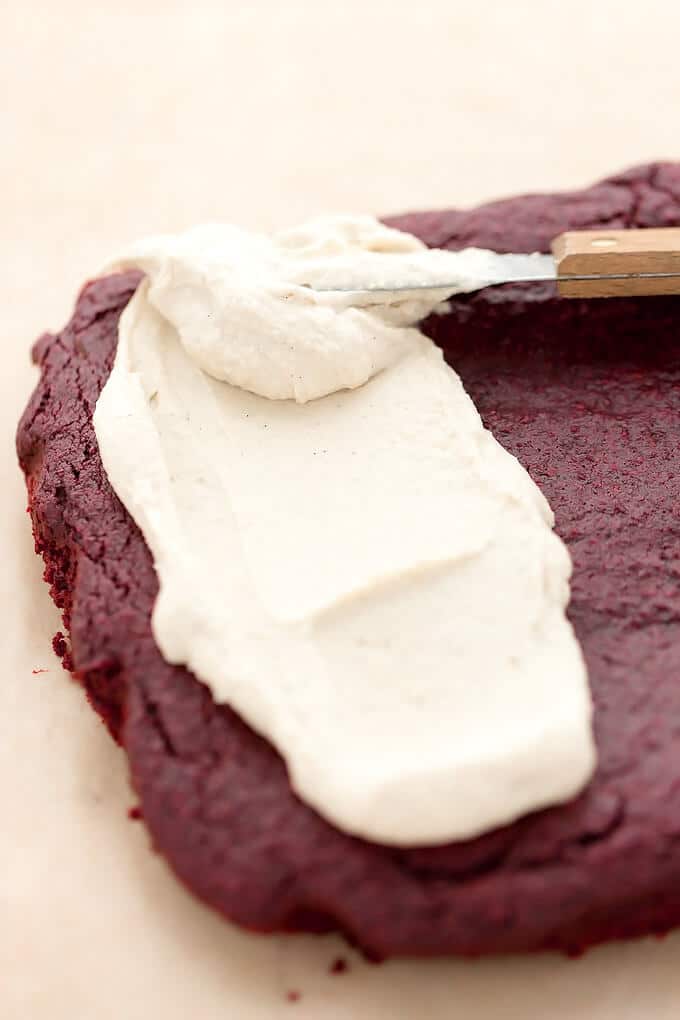 To make this vegan and gluten-free red velvet cake, you'll add rolled oats, coconut sugar, cacao powder, a bit of baking powder, and a pinch of sea salt to a food processor.

Process for about four minutes, or until the oats are finely ground and the mixture resembles flour (cacao-dusted flour, that is). 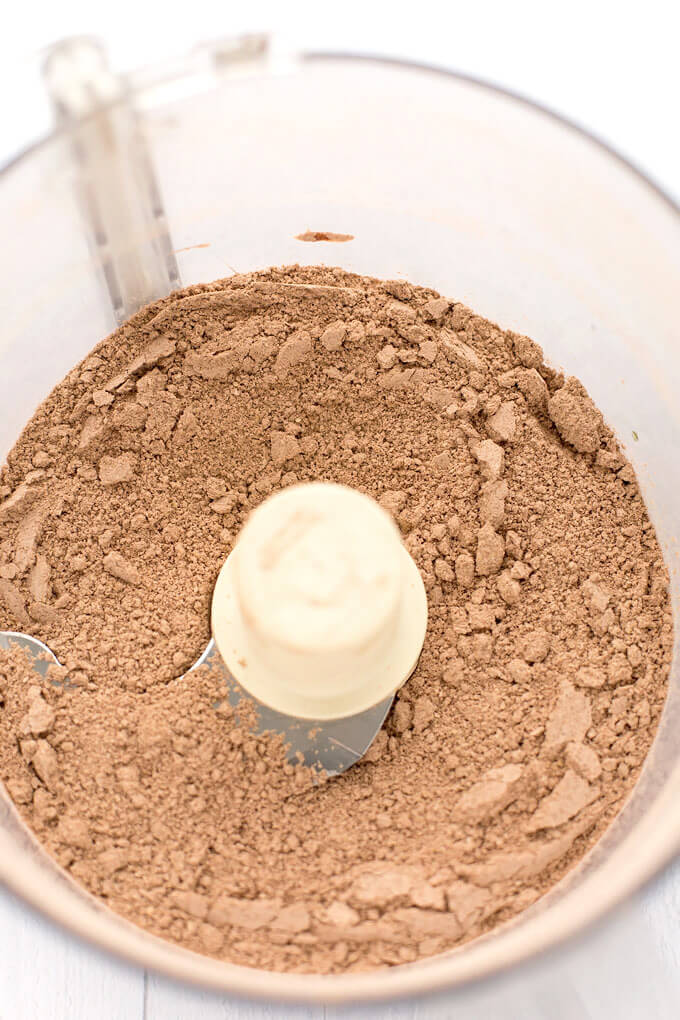 Transfer the flour mixture to a large mixing bowl and set aside.

Add six ounces of raw beets to the empty food processor and pulse until they're very finely grated. Then, add a few tablespoons of melted coconut oil, a couple tablespoons of natural almond butter, two spoonfuls of pure maple syrup, and a generous splash of vanilla. Process the mixture until puréed.

Next, add the puréed beet mixture to the flour mixture and stir to mix well. 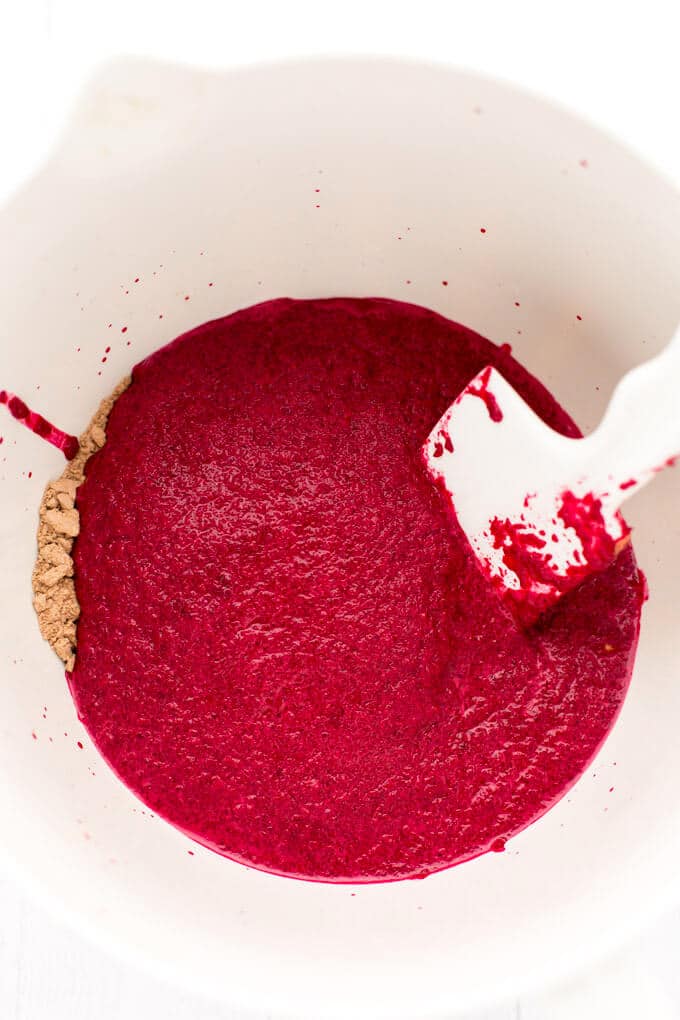 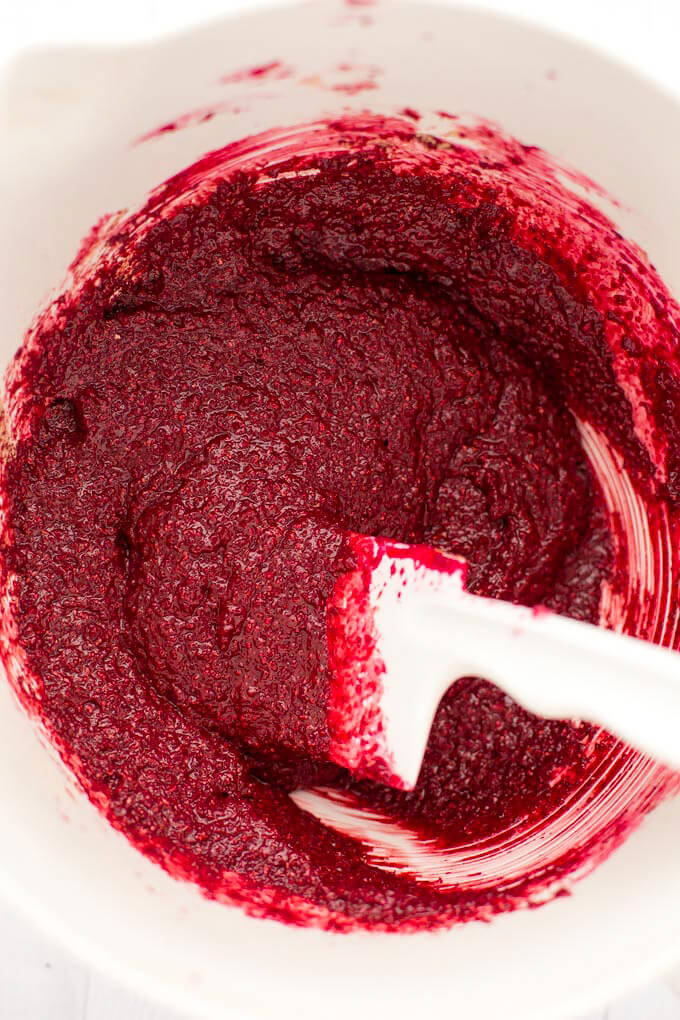 Spoon the batter into a lined baking pan and gently smooth out.

Then, bake for 18 minutes or until the top of the cake is crackled and a toothpick inserted in to the center comes out mostly clean with several moist crumbs at the tip.

If you're unsure when to pull the cake from the oven, lean toward slightly under-baking. 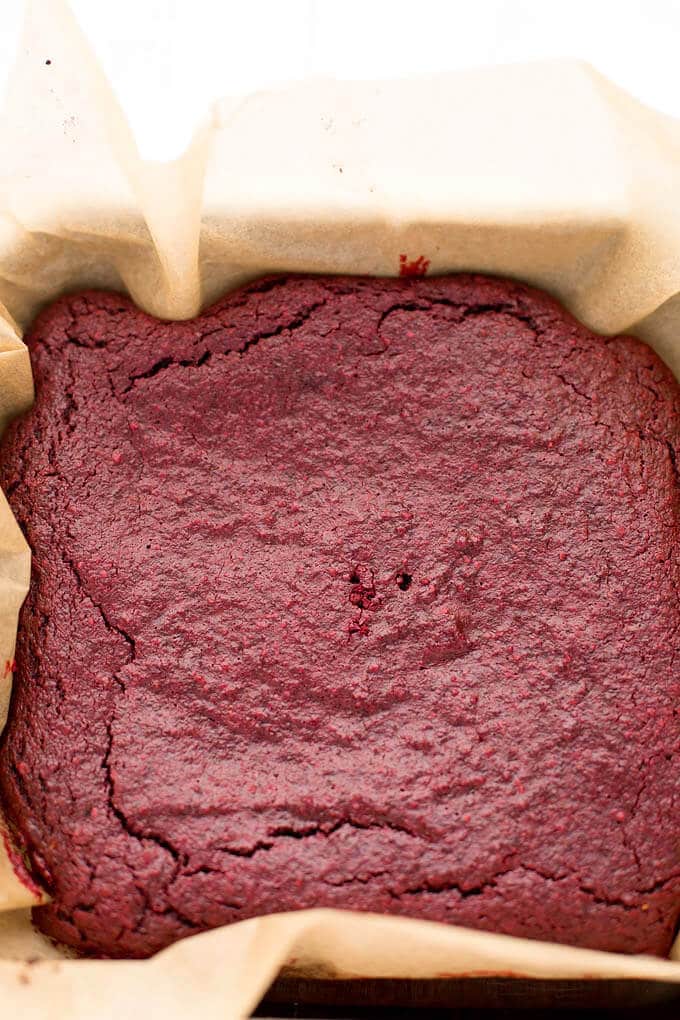 As the cake bakes, you'll whip up a batch of vanilla cashew-coconut icing (originally seen slathered atop these carrot cake blondies).

The icing is made by blending together homemade cashew cream, coconut butter, maple syrup, a tiny bit of coconut flour (to thicken and add structure), vanilla, a splash of apple cider vinegar (to offer a subtle tang reminiscent of a traditional cream cheese frosting), and a pinch of sea salt.

Once it's prepared, chill the icing in the freezer for 15 minutes to gently set.

This vanilla-kissed vegan icing is thick, creamy, and the perfect complement to chocolaty red velvet cake. 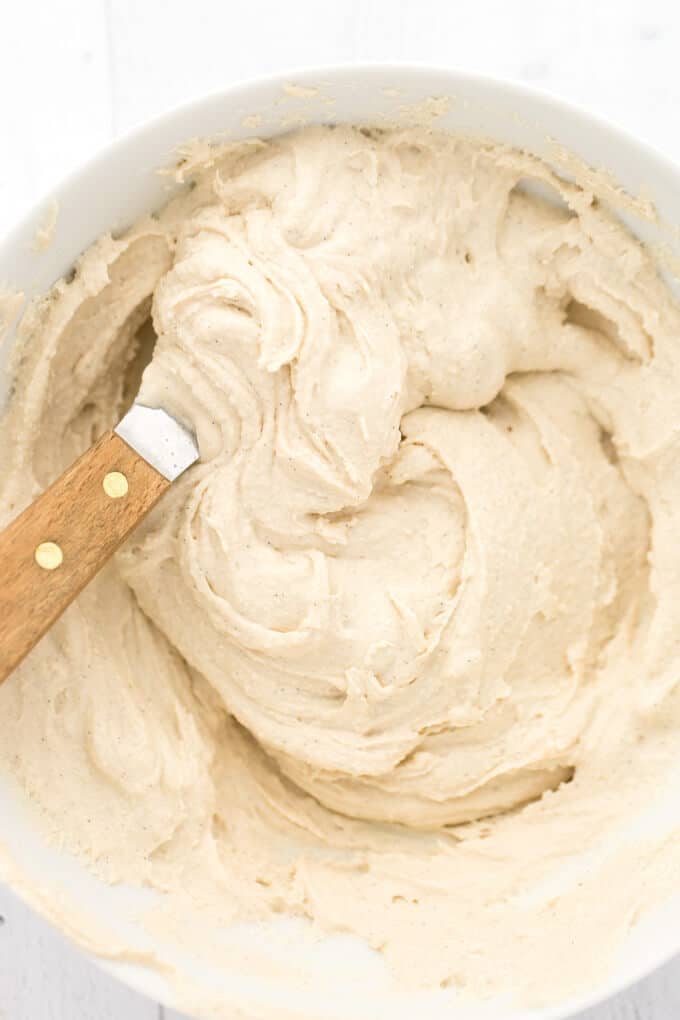 Once the cake has cooled, slather to your heart's content.

For an extra pop of texture and color, sprinkle the surface with mini chocolate chips, crushed freeze dried raspberries, and coconut flakes.

Or enjoy it just as is, in its purest red velvet form... 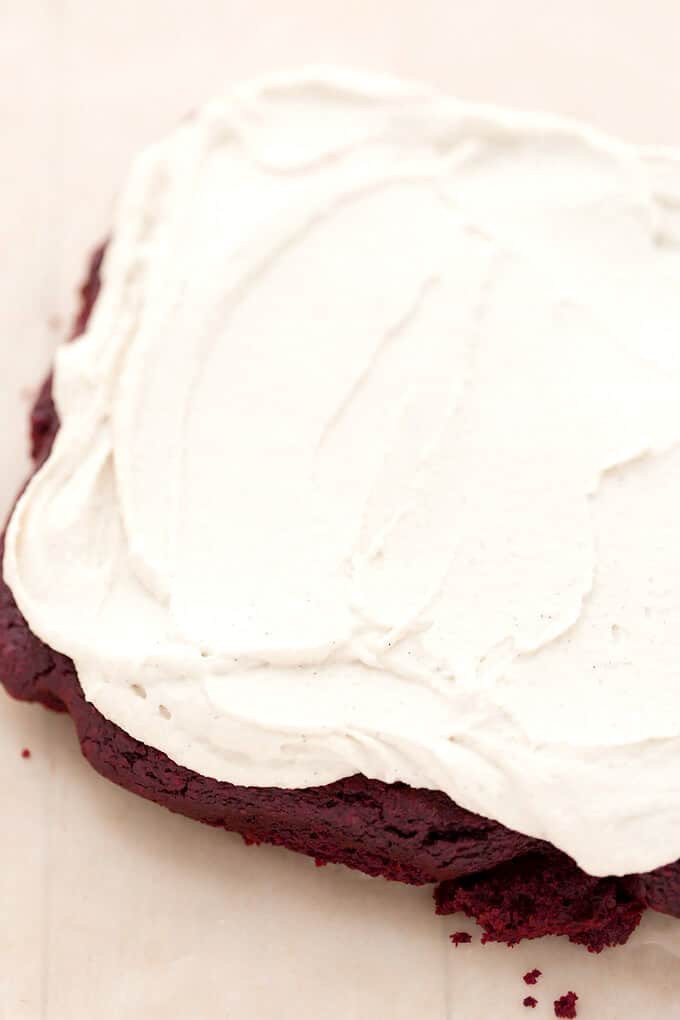 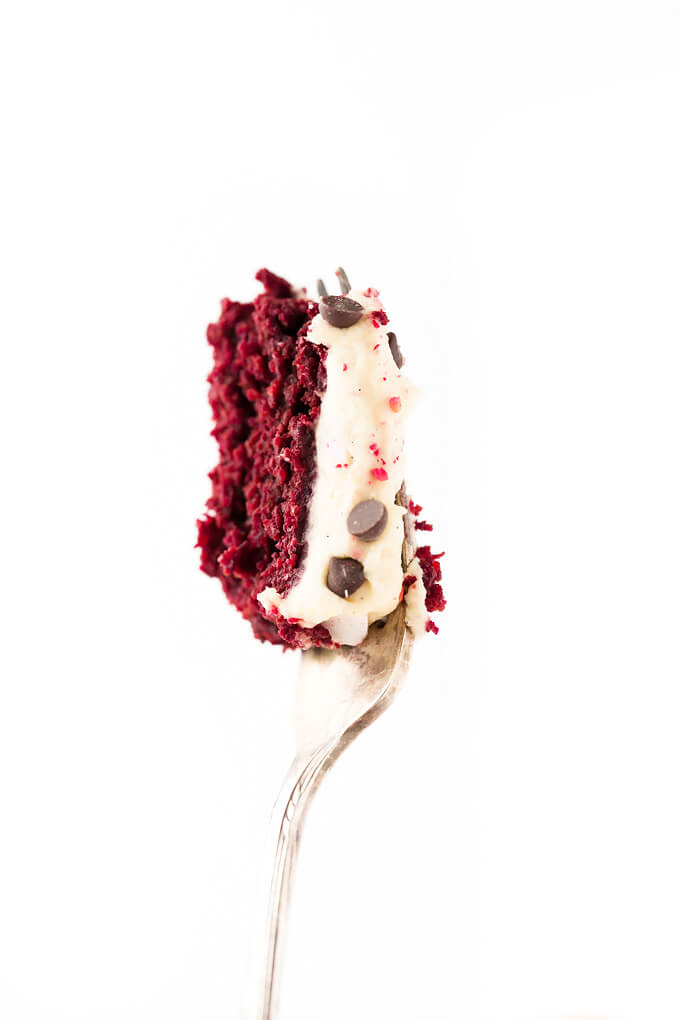 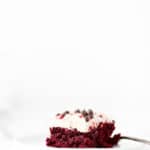 Beets are the magical touch in this moist, chocolaty, almost brownie-like vegan cake, but other than the vibrant red hue and rich texture they lend, you'll never know they're there! Oat flour stands in for all purpose, making this cake gluten-free. A thick vanilla icing with a cream cheese like tang gets slathered on top of the red velvet cake for an added touch of sweet decadence. The icing is refined-sugar-free and made from a combination of coconut butter, cashews, plant-based milk, maple syrup, vanilla, and apple cider vinegar. A small amount of coconut flour is whisked in to thicken and set the icing, yielding a spreadable, whipped consistency. For an extra touch of sweetness and pop of color, I recommend topping this cake with a sprinkle of mini chocolate chips and crushed freeze dried raspberries.
Course Cake, Dessert, Icing
Cuisine Gluten-Free, plant-based, Vegan
Prep Time 1 hour
Cook Time 20 minutes
Total Time 1 hour 20 minutes
Author Ashley

For the Just Beet It Vegan Red Velvet Cake

For the Vanilla Cashew-Coconut Icing

*For best results, weigh the beets after dicing to ensure you have exactly 6 ounces. **It's very important that the coconut butter is in a liquid state before blending. I find it’s easiest to make a fresh batch of homemade coconut butter and simply measure off ½ cup while it's still in a liquid state. However, store-bought coconut butter will yield a smoother icing because it's typically much smoother than homemade coconut butter. That said, store-bought coconut butter can be tricky to melt because it scorches and burns easily which leads to a seized, hardened texture. *** Extra icing can be refrigerated for up to 1 week or frozen for up to 1 month. ****Keep the cake chilled until just 5 to 10 minutes before serving to maintain the icing's thick, creamy texture.