This vegan tuna macaroni salad is a veg-friendly take on the original potluck summer favorite. Unlike other vegan tuna salads, this one isn't made with beans. Nope! Not a bean in sight. And no jackfruit either! Instead, a secret vegetable ingredient (helped along by a simple technique) creates the most perfect un-tuna taste and texture. Keep reading to find out what it is! 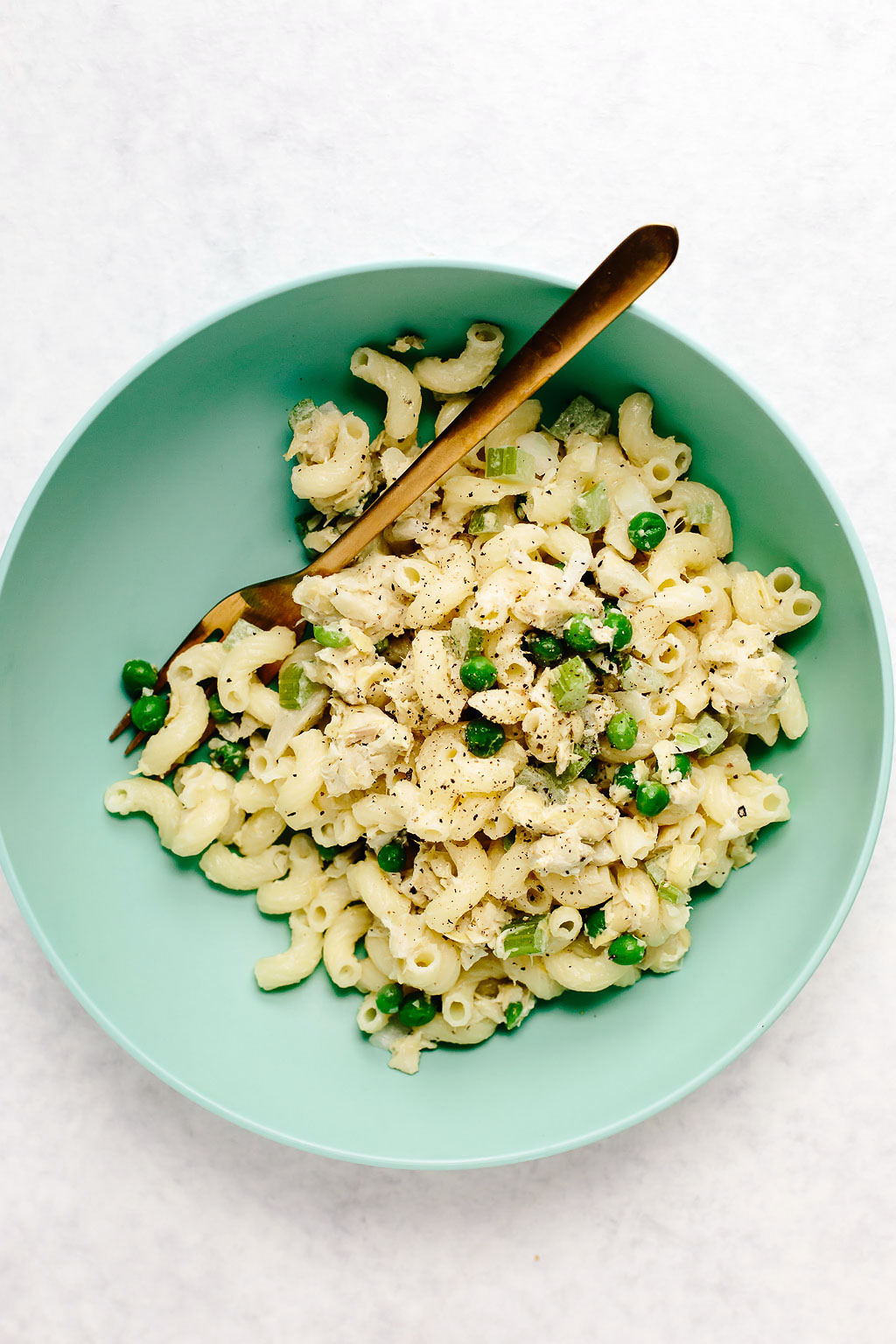 As I sat down to write this post, it dawned on me that it's been ages since I've offered much in the way of a life update.

Part of this is due to the fact that it's summer and we've simply been doing leisurely summery things. Meaning nothing too crazy or exciting to report on.

The weekends have been filled with sidewalk chalk, bubbles, and bike rides. We invested in one of those baby bike trailer things so that we could tow Sloane around. Cycling with it is no joke. Dan and I have to take turns hauling it (because one's hamstrings can only endure so much BURN).

The other reason for my lack of life chit-chat here is because I've been spending a good chunk of each work week researching and writing for a platform I co-run—The Good Space. If you follow me on Instagram, then you've probably seen me mention it there.

Long story short, a fellow blogger (and friend) Francesca and I started The Good Space to bring our shared love for all things self-help and spiritual into the world in a way that's digestible, fun, and practicable.

Every month, we explore a new theme—fyi, this month's theme is all about the ego—and send out weekly email newsletters to break down each topic. We dive deep while also aiming to keep the information actionable and grounded.

(If this ↑ resonates with you and you'd like to signup to receive The Good Space's weekly newsletters, you can do so here.)

Exploring, investigating, and writing about the intersection of psychology and spirituality is something I've become increasingly passionate about over the years.

And yet the time I spend in the kitchen creating recipes remains near and dear to my heart, too.

It's the balance of both that's offered so much fulfillment lately.

Long story (not very) short: I feel so very lucky to be able to hold space for both of these creative endeavors.

Thanks for everything you've done to support me and this site throughout the years. I truly would not be able to do this work—that I love so much—without you.

And speaking of work that I love, it's recipes like this one that keep me so excited to create and share.

This un-tuna macaroni salad is going to wow you.

And that statement holds true whether you've been craving the "original" tuna macaroni salad since going vegan or you're simply looking for a way to make this classic recipe in a more eco-friendly manner. 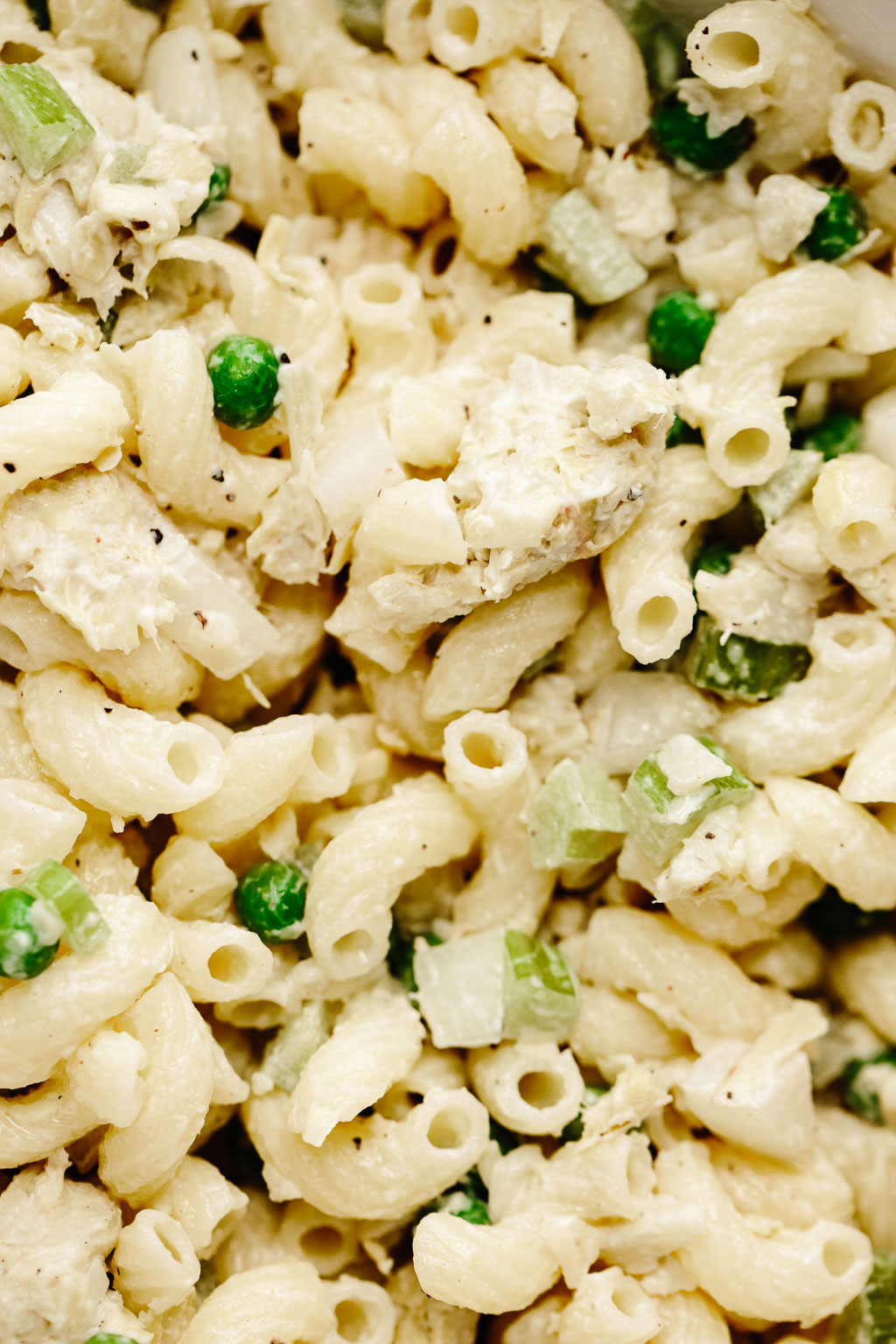 Unlike other vegan "tuna" salads, this one is totally bean-free. And no, the secret ingredient isn't jackfruit.

Are you ready to be amazed? The "tuna" in this "un-tuna" macaroni salad is made from... 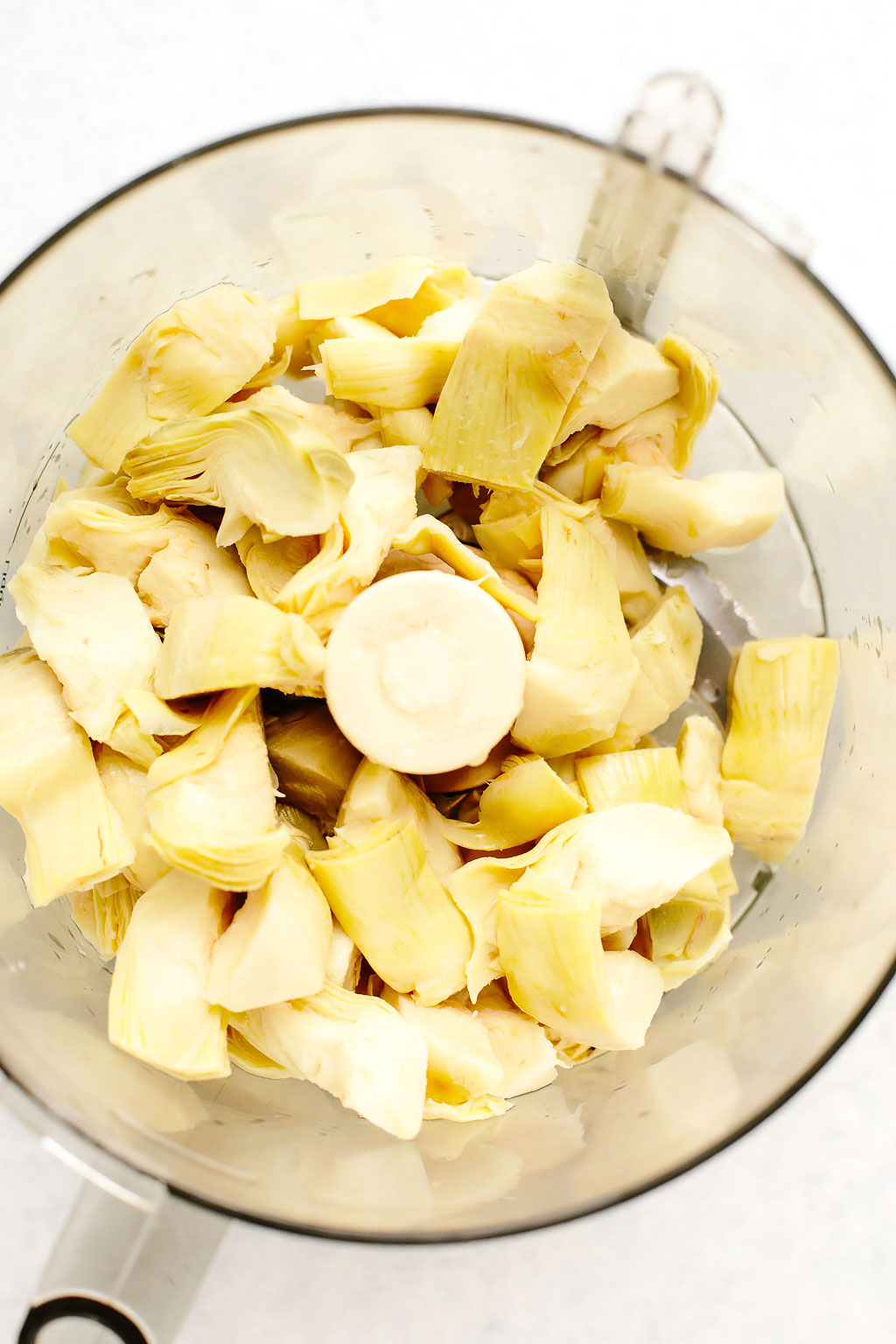 I came up with this un-tuna trick years ago and haven't repurposed it nearly enough.

And although it's been a long while since I've had actual tuna, I'm confident this plant-based swap could go undetected by non-vegans.

To make it, you'll boil 12 ounces of elbow pasta (use gluten-free if needed) until tender. 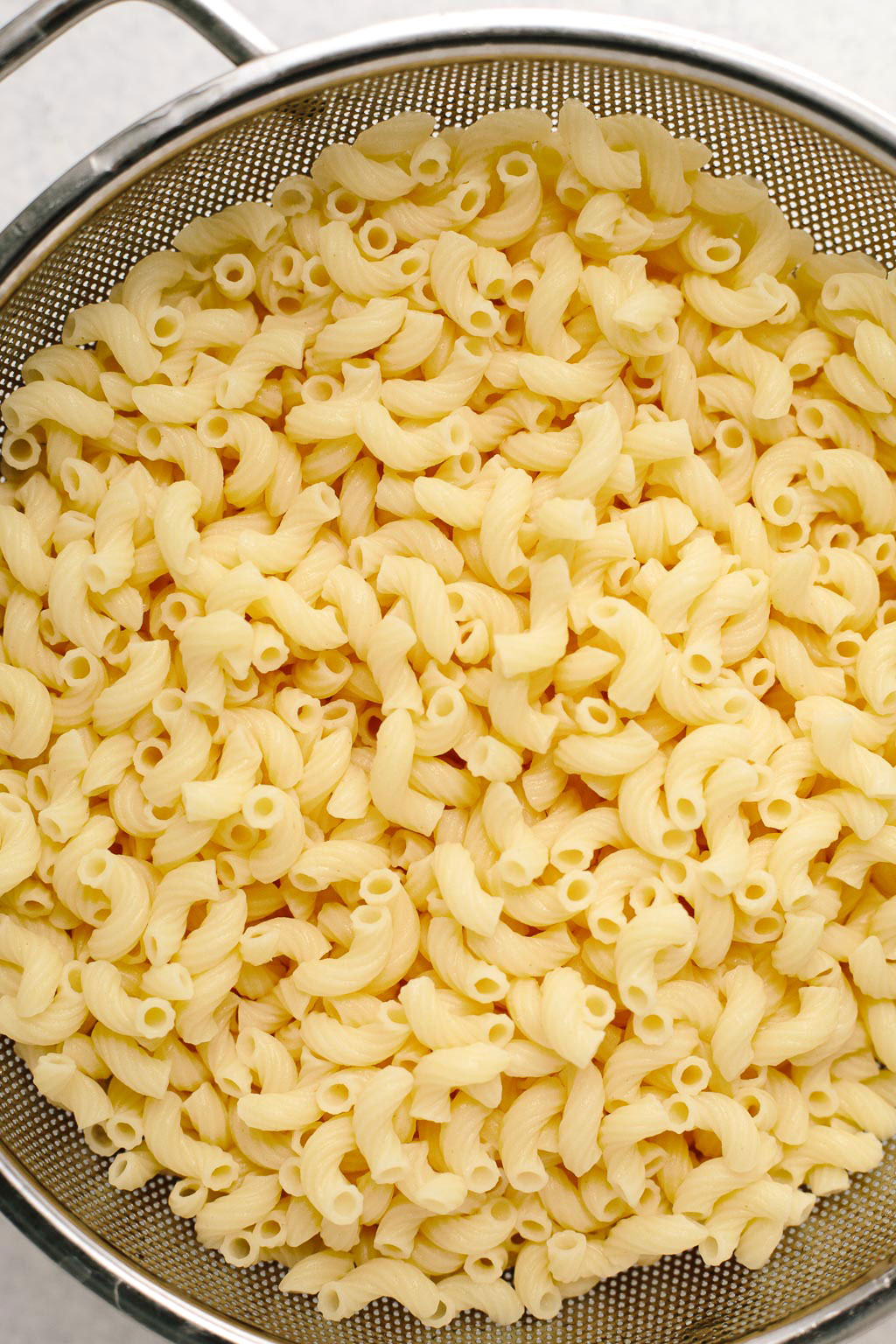 Next, pulse two cans of artichoke hearts in a food processor. Just a handful of pulses will get the job done.

If you don't have a food processor, you can still join in on the fun. Simply chop the artichoke hearts to the texture seen in this photo... 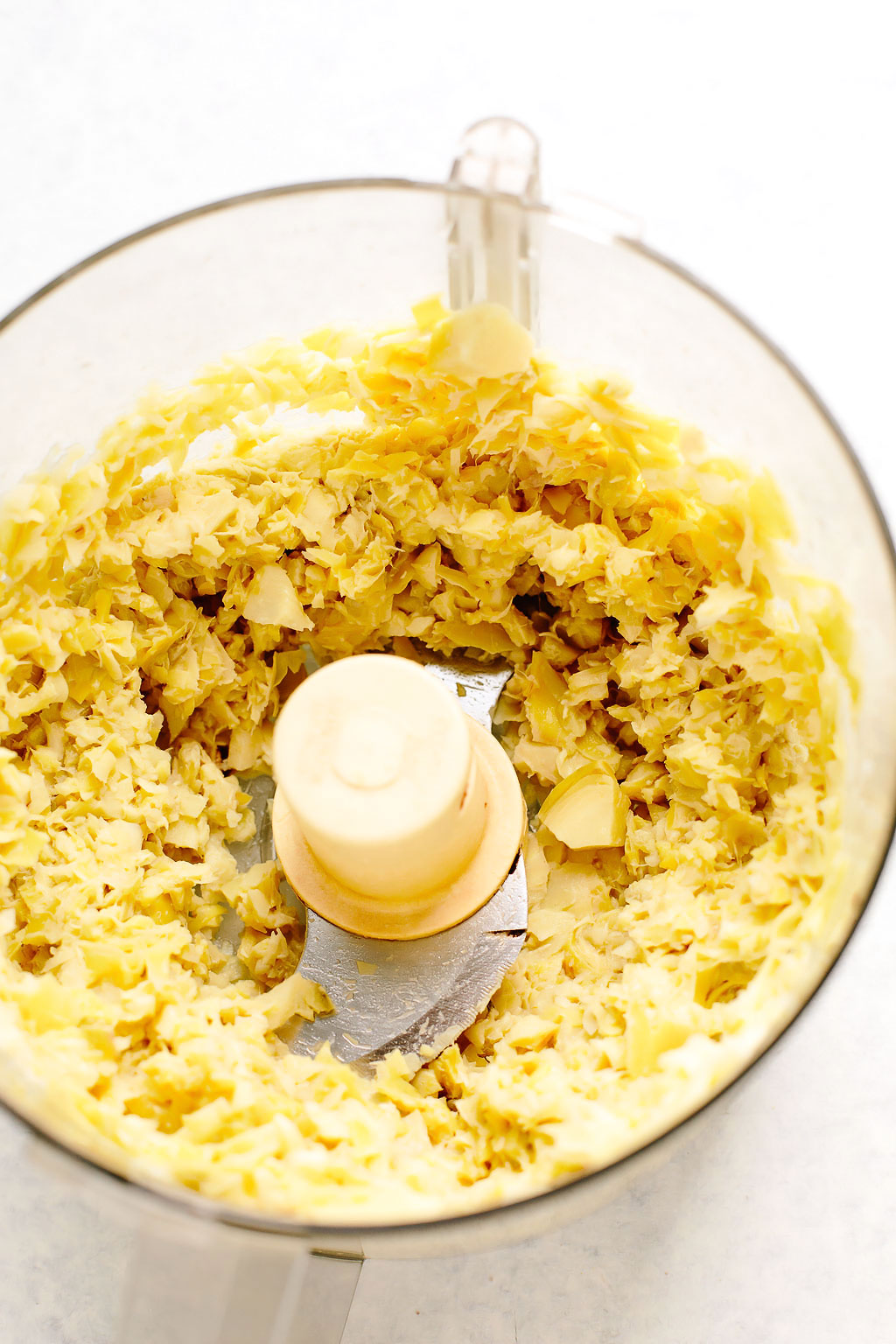 Once the artichokes are chopped, gather them in a piece of cheesecloth or a nut milk bag (or your hands if those options aren't available) and press as much of the excess liquid from them as possible.

It should be almost pulp-like. This creates a much more tuna-y texture. 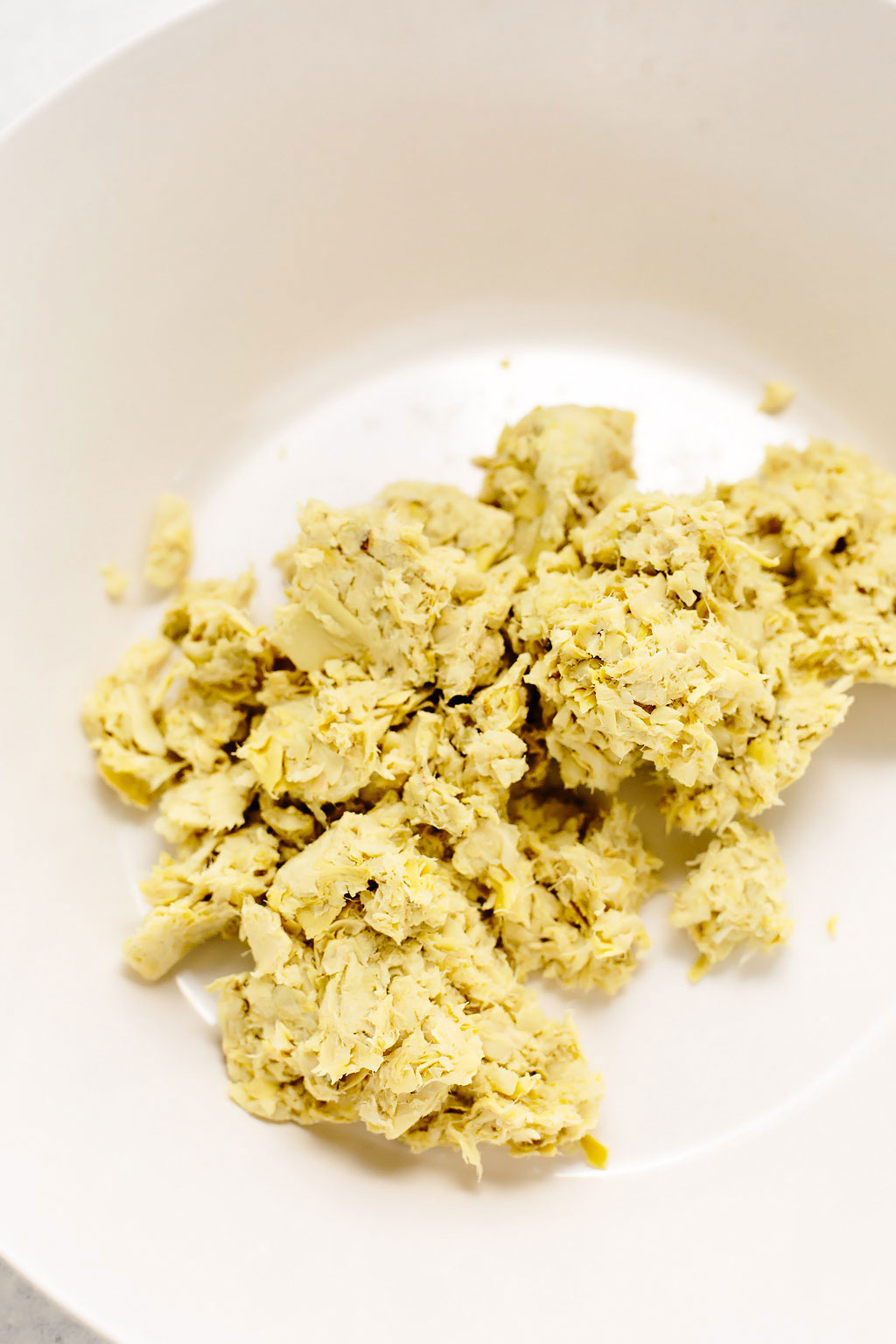 Gather and prepare the rest of the add-ins, including petite peas (I use thawed frozen to save time), diced onion, and chopped celery. 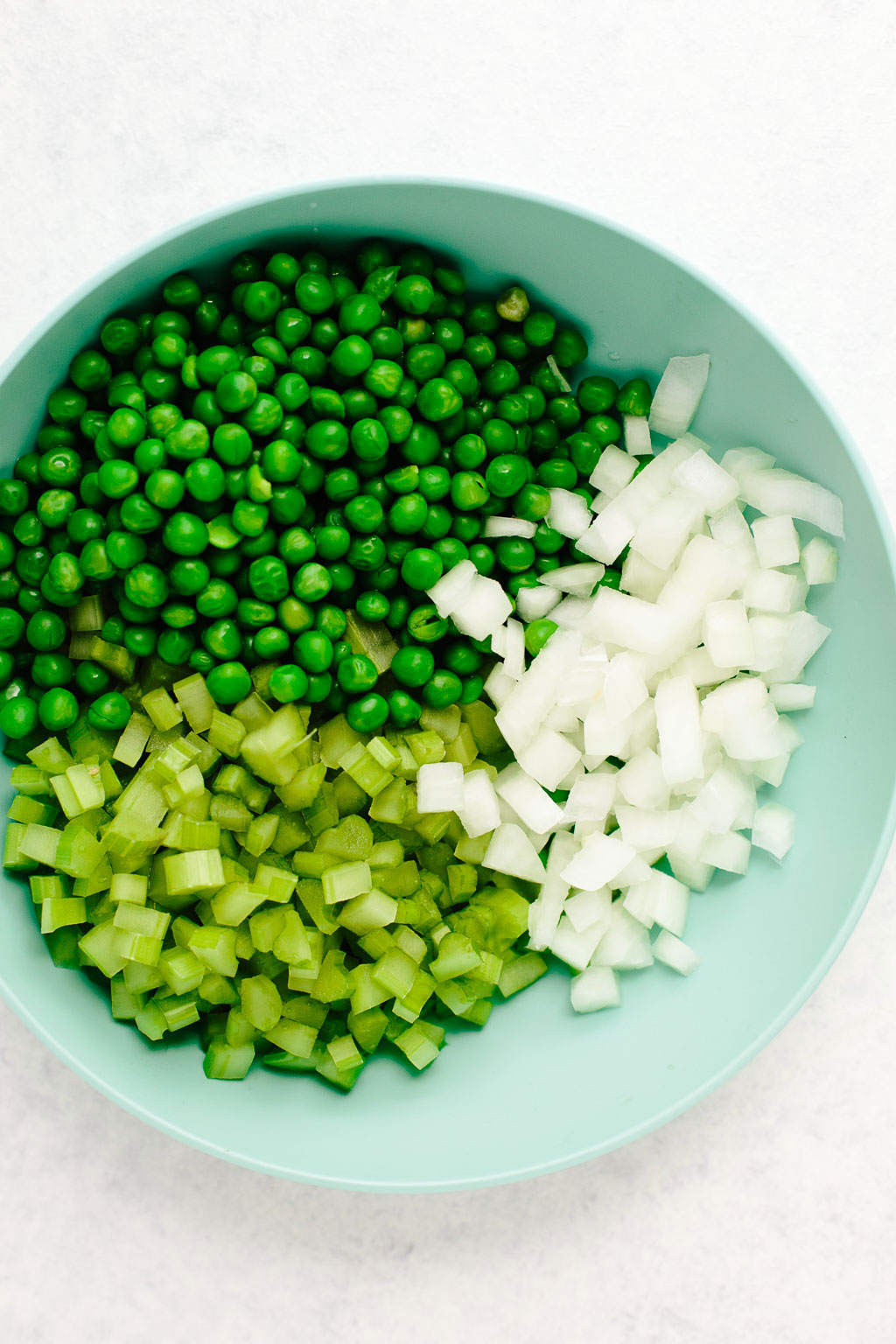 Then, whisk together the dressing. I use the term "dressing" loosely here—this fuss-free concoction is hardly a dressing.

Now, if you want to take this salad up a notch, use kala namak (i.e., black salt)—which has an "eggy" flavor—instead of regular salt.

Add everything to a large serving bowl and toss, toss, toss to coat. Then, taste and season with more salt and pepper. 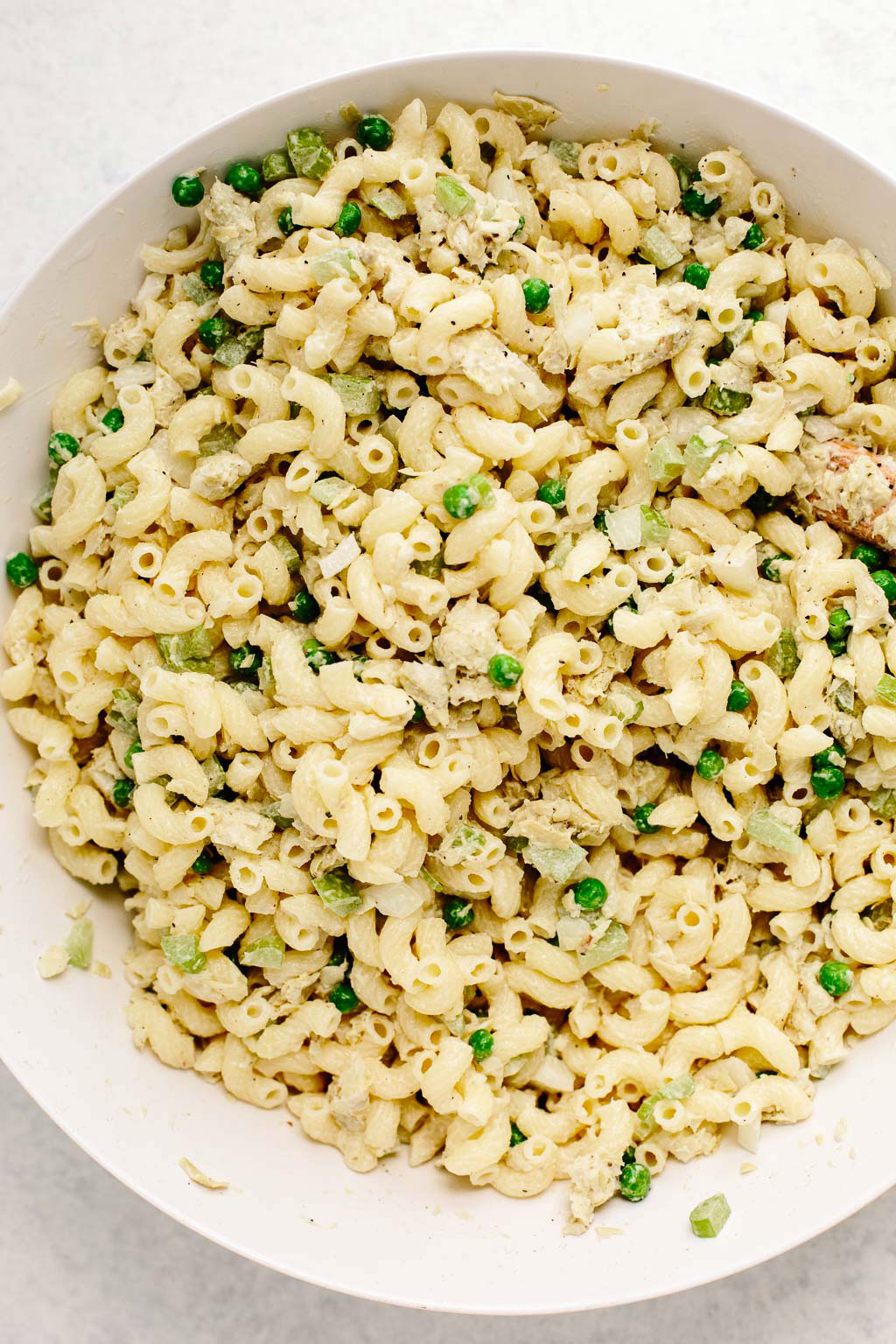 This salad is excellent served fresh but given a few hours in the fridge, the flavors really have a chance to meld and mingle.

Point being: Don't be afraid to prepare head. It's even tastier after a little chill time. 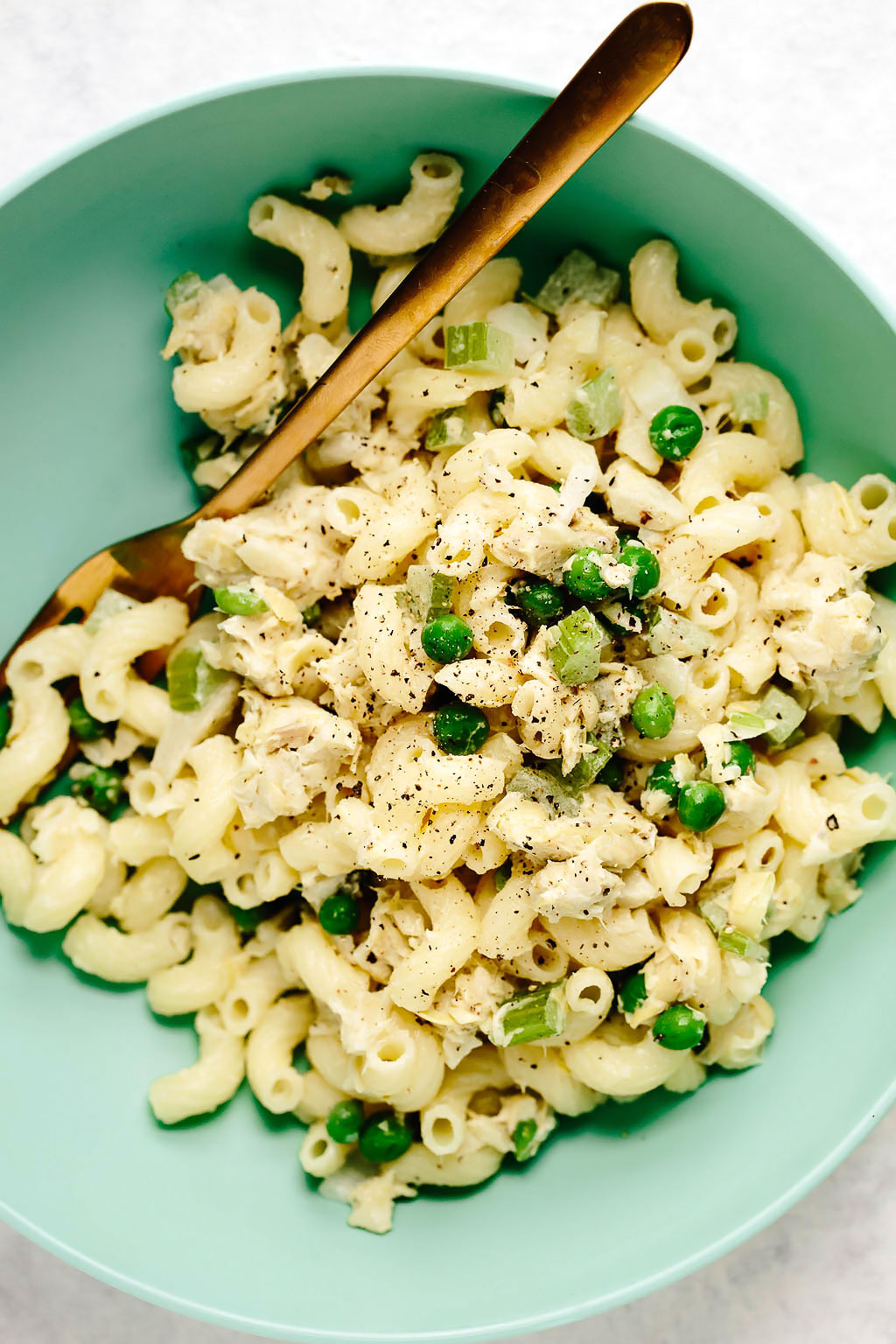 I hope you enjoy this vegan tuna macaroni salad as much as I do.

I'm extra proud of the creativity in this one. A classic unexpectedly gone vegan that could probably pass for the "real" thing in a sixties salad lineup. 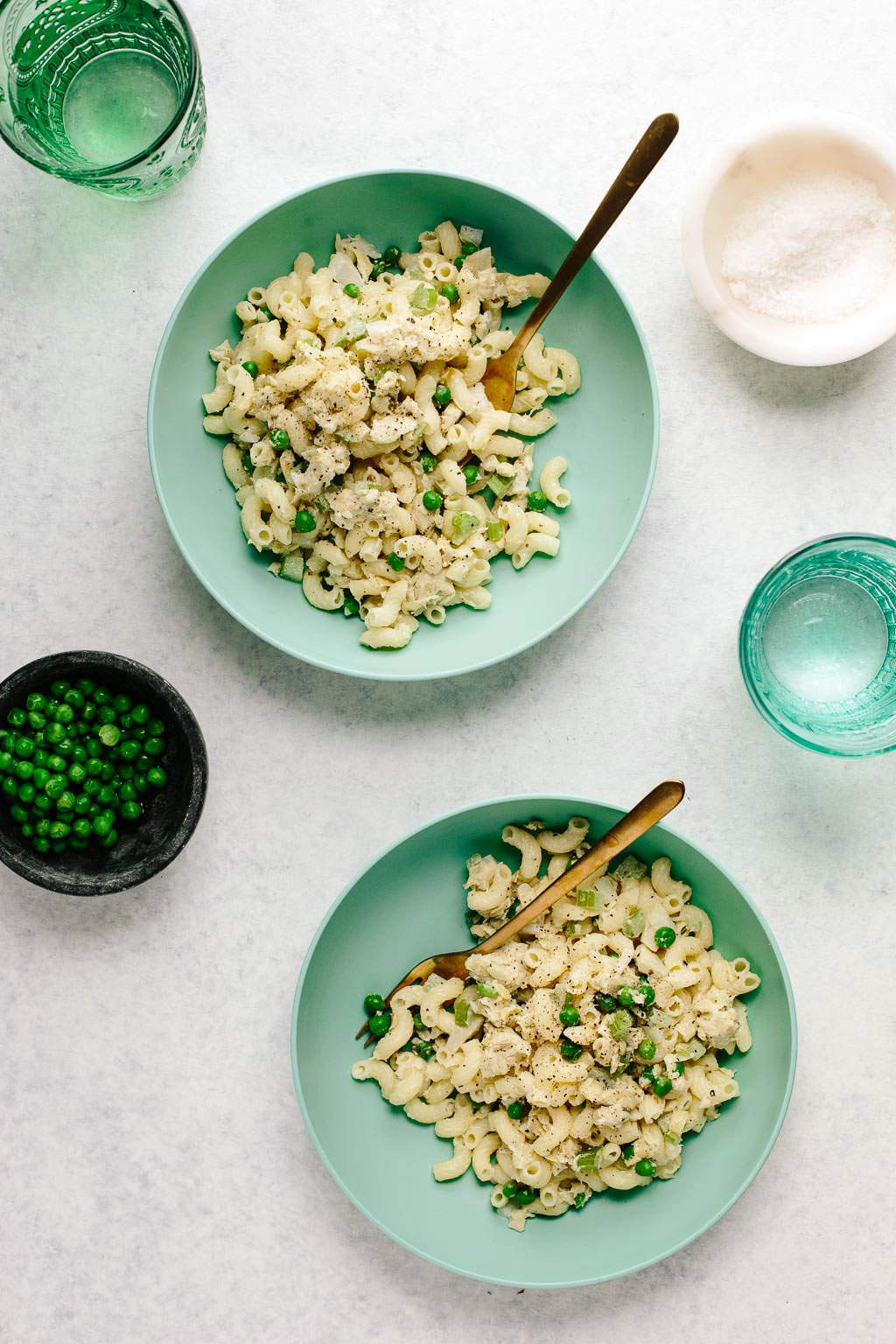 This vegan tuna macaroni salad is a veg-friendly take on the original potluck summer favorite. Unlike other vegan tuna salads, this one isn't made with beans. Nope! Not a bean in sight. Instead, a secret vegetable ingredient (helped along by a simple technique) creates the most perfect un-tuna taste and texture. Any guesses? The answer: Artichoke hearts! When chopped, they take on a flaky texture that looks and feels a whole lot like canned tuna. To up the authenticity of the texture, the excess water is pressed from the chopped artichokes.
Prep Time 20 minutes
Cook Time 10 minutes
Total Time 30 minutes
Servings 8 side servings
Author Ashley

*If you prefer a less noodle-y salad, use 8 ounces of pasta instead of 12 ounces.  **If you prefer a creamier pasta salad, don't be afraid to add more mayo! ***If you don't have a food processor, simply chop the artichokes using a knife. See above photos for texture reference!