These vegan pumpkin pecan cinnamon rolls are fluffy, soft, gooey, and packed with sweet, cinnamon-y goodness. Cinnamon-sugar-pecan filling is rolled up in pumpkin-packed dough. The cinnamon rolls are then baked and generously drizzled with a simple 2-ingredient glaze. 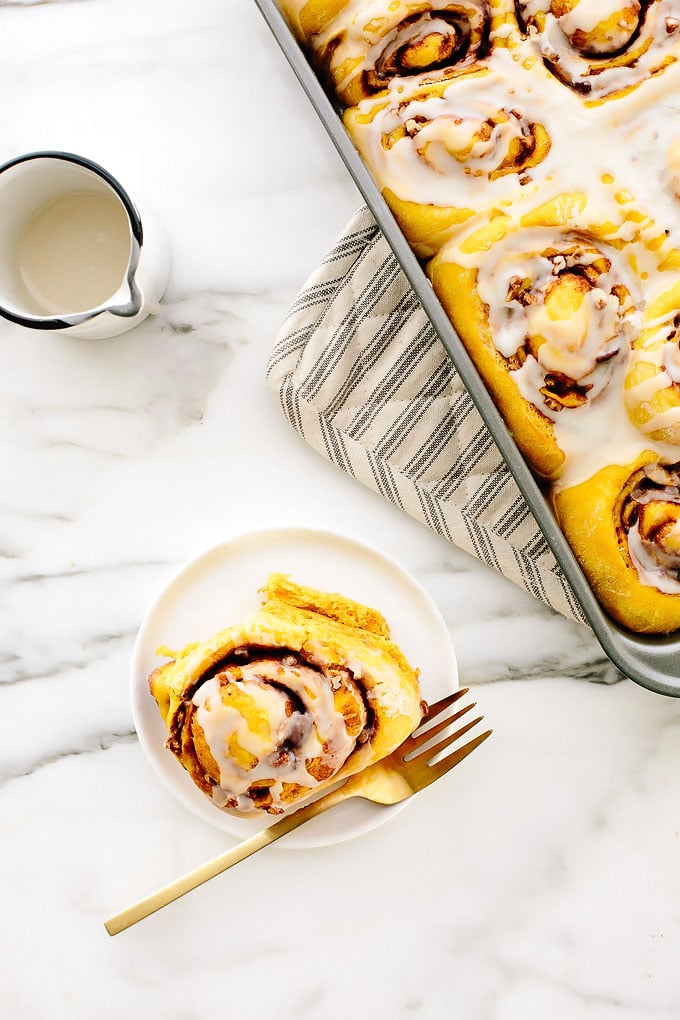 Hello again, dear friends. The irony of this post quickly being followed by a near two-week blogging absence is not lost on me.

You may have seen my Instagram stories last week, but long story short: My MacBook screen decided to give itself an obnoxious magenta-striped makeover, and my laptop was sent out for repair for a whole week. Which left me, yes, computer-less.

A computer-less food blogger is a peculiar sight, indeed.

I was left to do things the good ol' fashioned way.

I scribbled down recipes on... wait for it... PAPER. With an actual pen (actually, let's be clear: it was a Gelly Roll gel pen because #lifegoals). Of course, my hand quickly fatigued, reminding me that my stamina for the handwritten word just isn't what it used to be.

I plotted out my to-do's in long, lengthy, daunting lists.

I nixed my plans of photo- and video-editing and spent long... very long... hours in the kitchen instead.

I'd like to say that, by some amazing twist of fate, these cinnamon rolls were the result of all those long hours and therefore made possible only by the breaking of my computer. However, they were actually the result of my regular old testing schedule before my computer hit the fan.

But the holdup in getting this delicious recipe to you? Well, you do have my broken computer to thank for that.

Alright, no time like the present, so let's get serious about these cinnamon rolls right this very second, because look...

Can I just tell you that, upon taking a bite of one of these freshly baked beauties, my non-vegan sister promptly said, "This is the best cinnamon roll I've ever tasted."

And she's one of those super tasters with highly particular tastebuds, so I feel like that vote of confidence is worth double points.

If that isn't convincing enough, Mr. I-don't-give-out-10-ratings (i.e., Dan), gave these vegan cinnamon rolls an enthusiastic 10. And then promptly asked me to make another pan (after he'd devoured the last roll from the second pan I'd made in less than a week).

As far as ease goes, these cinnamon rolls are a breeze in terms of active preparation. The only hard part is the wait while proofing the dough. No surprise there.

And so, to make these vegan pumpkin cinnamon rolls, you'll start by preparing the pumpkin dough.

Whisk together warm water, active yeast, and pure maple syrup. Let the mixture stand for five minutes, or until a foam develops across the surface.

Then, combine the yeast mixture with spelt flour, pumpkin puree, a small amount of coconut oil, and a bit of sea salt.

Turn the pumpkin dough out onto a well-floured surface and knead for two minutes, or until it begins to hold its shape and springs back slightly when pressed. Spelt flour has a more delicate gluten structure than other glutenous flours, so it's important not to over-knead it or you'll end up with dry cinnamon rolls.

Once the dough has been kneaded, shape it into a ball, place it in a greased bowl, and cover it with a kitchen towel. Allow the dough to rise in a warm and cozy place for one hour and 15 minutes, or until doubled in size.

When the dough has just a few minutes left to rise, whisk together the pecans, coconut sugar, and cinnamon.

Then, punch down the dough, turn it out onto a floured surface, and knead it for just 30 seconds, or until it loses a bit of its tackiness.

Roll the pumpkin dough into a rectangle that's about 12 x 24 inches. Lightly brush the top with melted coconut oil, and sprinkle on the coconut sugar mixture.

Carefully roll the dough up, slice it into 12 to 16 rolls, and place each roll, swirled-side-down, in a greased casserole dish. 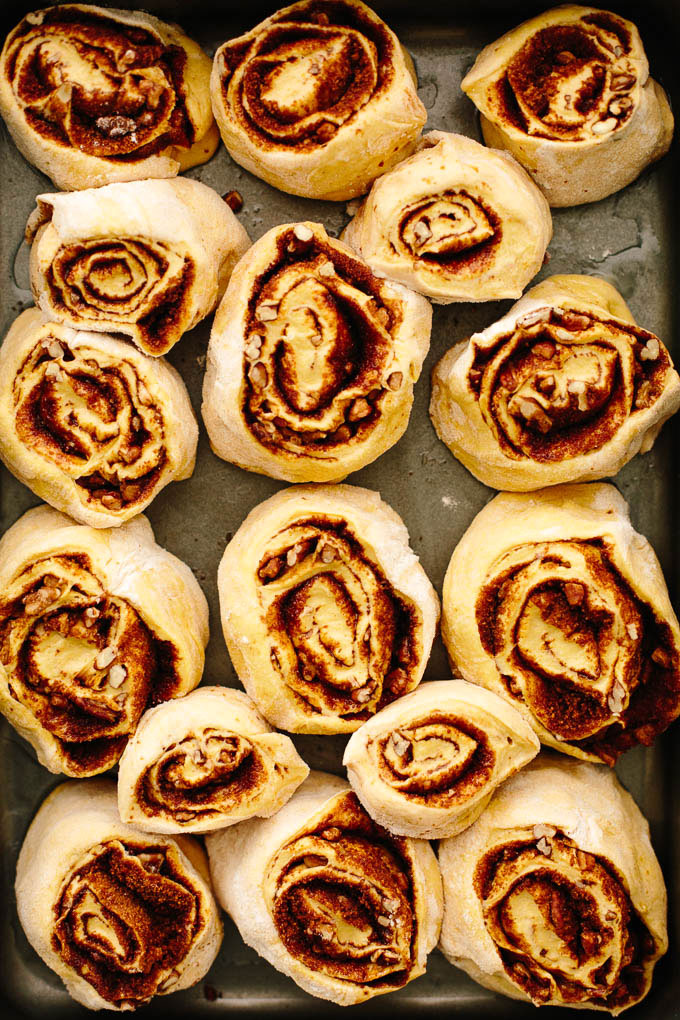 Cover the rolls and let them rise for 45 minutes, or until doubled in size. 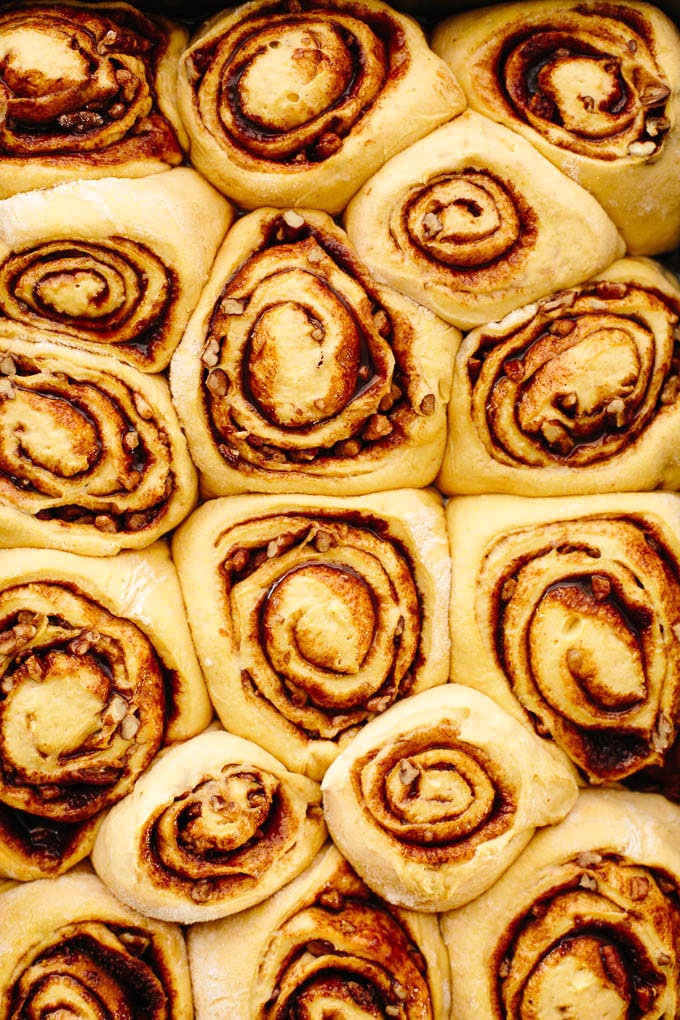 Then, bake the rolls for 16 to 20 minutes, or until they've just barely turned golden.

Now, you can go the "healthier" route (whatever that means nowadays) and drizzle the rolls with pure maple syrup, or you can go the slightly more "indulgent" route and whip up a super easy, 2-ingredient glaze. I vote indulgence here, but you do you.

To make the glaze, whisk together a couple cups of powdered sugar with a bit of water (a little goes a long way here).

Once the glaze reaches a drizzle-able consistency, drizzle or pour it over the warm vegan cinnamon rolls like so... 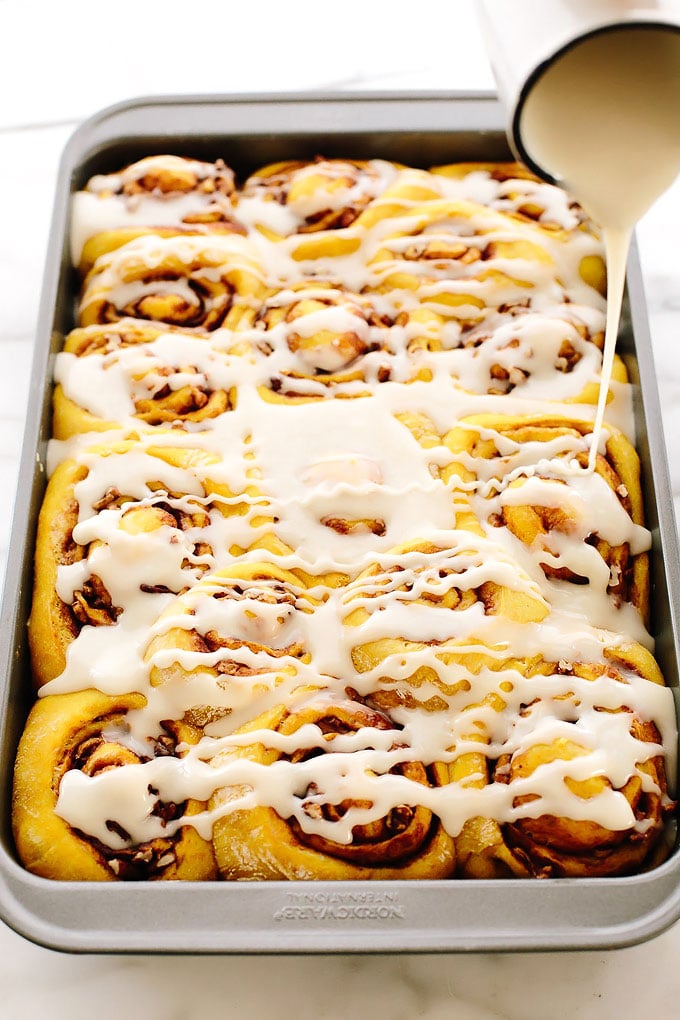 Once you've finished glazing the cinnamon rolls, stare at them for a minute or two because, I mean, look... 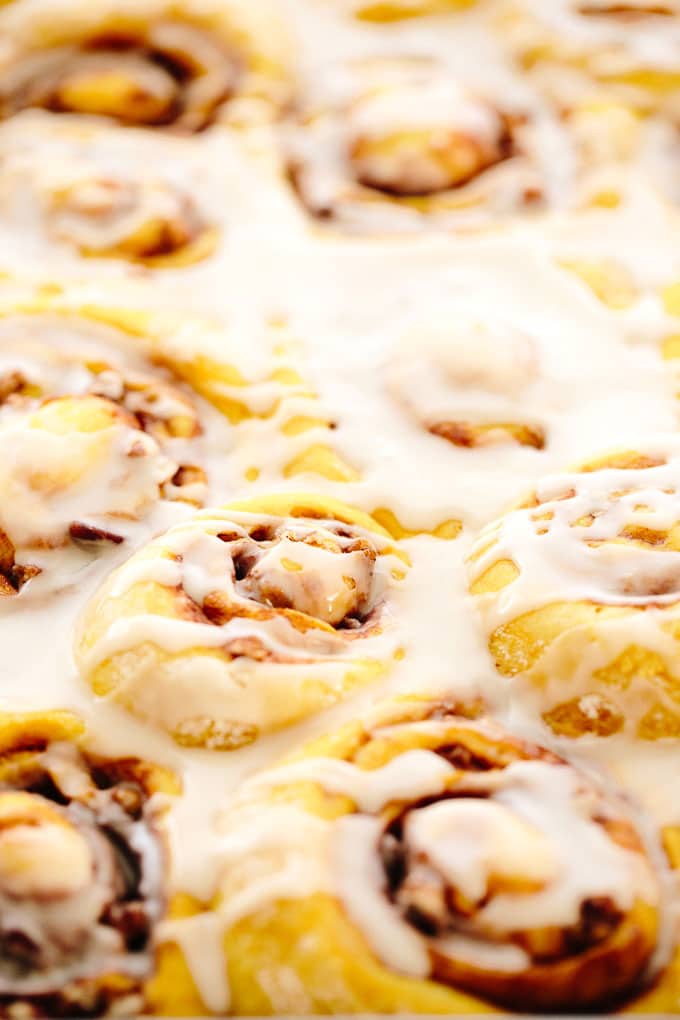 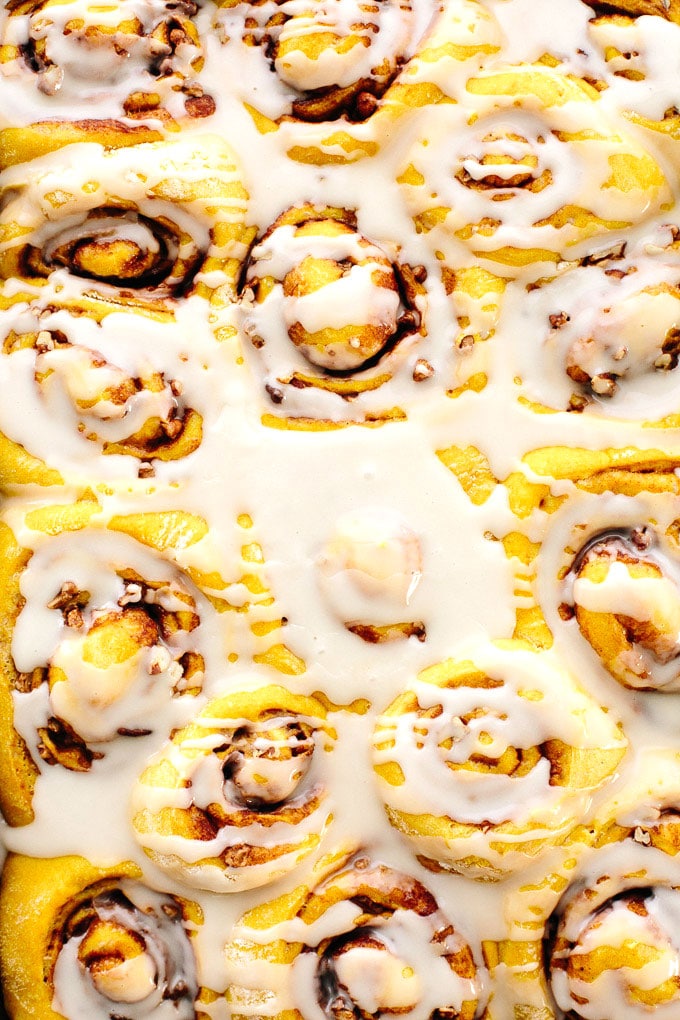 And yes, I know this post has an obnoxious number of photos. I really couldn't help myself, so if that sort of thing gets your blog-browsing eyes in a bunch, I apologize. 😗

While you should wait for the rolls to cool just a touch, please don't wait too long. Why? Because, I swear to you, there are very few things tastier than warm vegan pumpkin pecan cinnamon rolls.

For the Cinnamon Rolls

*You can reduce this to ½ cup if you want to cut back on the sugar. **Alternatively, you can drizzle the cinnamon rolls with pure maple syrup, but I much prefer the icing! ***I have a strong feeling these cinnamon rolls can be prepared ahead of time and baked later, and I'll be testing that in the coming weeks. If you want to take a small risk and try it out yourself: Prepare everything through step 10, cover the rolls with greased plastic wrap, and refrigerate them for up to 24 hours. Then, proceed with baking and icing as directed.