These falafel spiced chickpea wraps are made with simple ingredients and simple methods. Pan-toasted, spiced chickpeas are tucked into warm tortilla wraps or pita bread, topped with a simple cucumber-onion slaw, and generously drizzled with cashew yogurt tzatziki sauce. 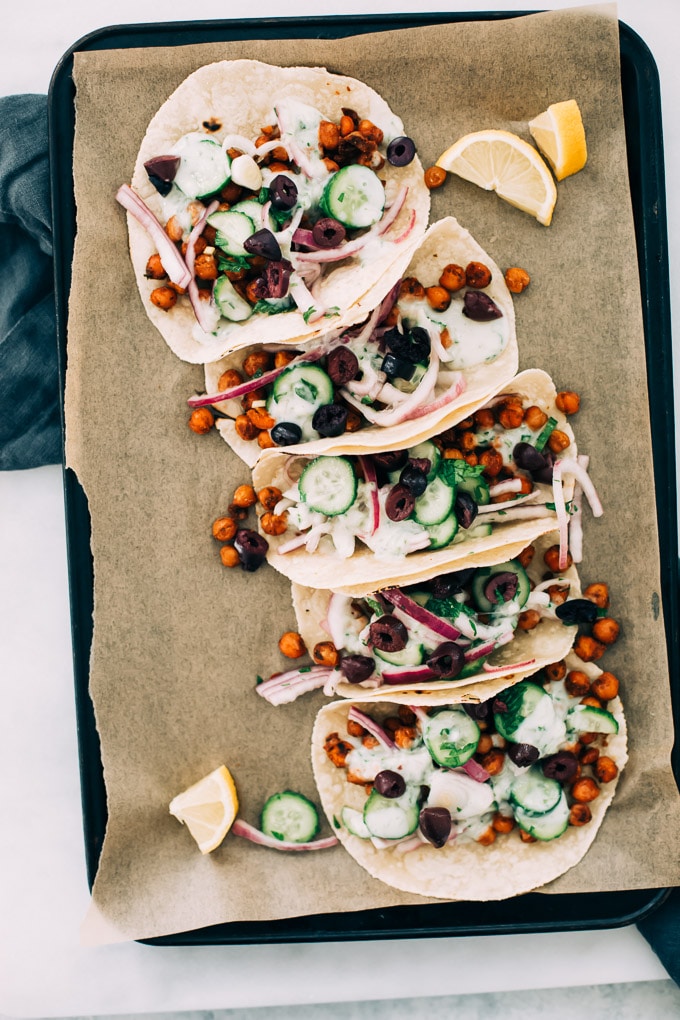 We recently brought our nanny back on, and so I'm now back to work nearly full-time.

Or more so working part-time on two jobs: One here in the creative space and the other overseeing various construction projects going on in our home.

It's felt wonderful and yet odd to be back to work. I feel quite rusty, to be honest. Lacking motivation and the creative oomph I usually have. No doubt the joint byproducts of being off my usual schedule for nearly three months and pregnancy hormones.

Most pregnant women love the second trimester, finding themselves feeling more energized and peaceful. Although I only have a sample of two pregnancies to survey, both times I've found myself struggling with more anxiety, blehness, and lack of motivation in the midst of the progesterone surge that occurs during the second trimester.

It's not all that surprising given that I've always felt much the same during the second half of my cycle—the half dominated by progesterone. Ironically, progesterone is supposed to be the calming, chill, I-feel-gooood hormone and so my opposite experience with it has always left me feeling like a bit of an oddball.

It's an especially curious thing to me given that my hormones have always presented as well-balanced when tested. In light of that info, the consensus seems to be that there are some women who are just highly sensitive to certain hormonal fluctuations. I appear to be in that boat.

Interestingly, in a message I received from an intuitive psychic who was channeling a group of Pleiadians (don't knock it 'til you've tried it), I was told I'm more sensitive than most to energetic fluctuations, hormones included. It rang true and would explain a lot.

My body thrives in the light of estrogen—I'm social, happy, calm, motivated, creative, and lean towards the extroverted side of my introverted nature. But progesterone? Nope. Not so much. Flip the script.

I'm curious to hear if any of you have found a similar trend in your cycle and/or during pregnancy. If you have, know that you're not alone. And also, if you have any insights, I'm all ears.

Alright, from hormones to chickpea wraps, because that's how we wrap around here [insert cringe]... 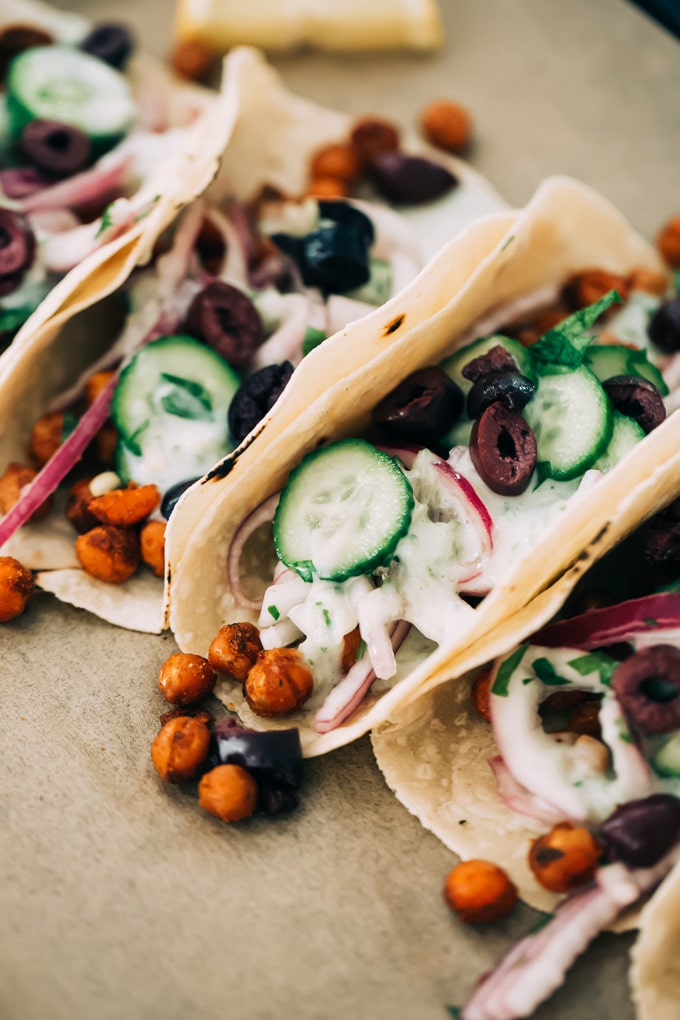 These falafel spiced chickpea wraps are simple to make; pack a punch of protein and fiber; and bring a welcomed balanced of fresh, zesty, and comforting flavors to the table.

To make them, you'll drain, rinse, and pat dry two cans worth of chickpeas. Heat a bit of oil in a pan, add them to it, and sprinkle with falafel-inspired herbs and spices, including cumin, parsley, smoked paprika, and coriander.

Pan-crisp the chickpeas for about 10 minutes, or until they're golden brown and the spices have created a sort of crispy crust like so: 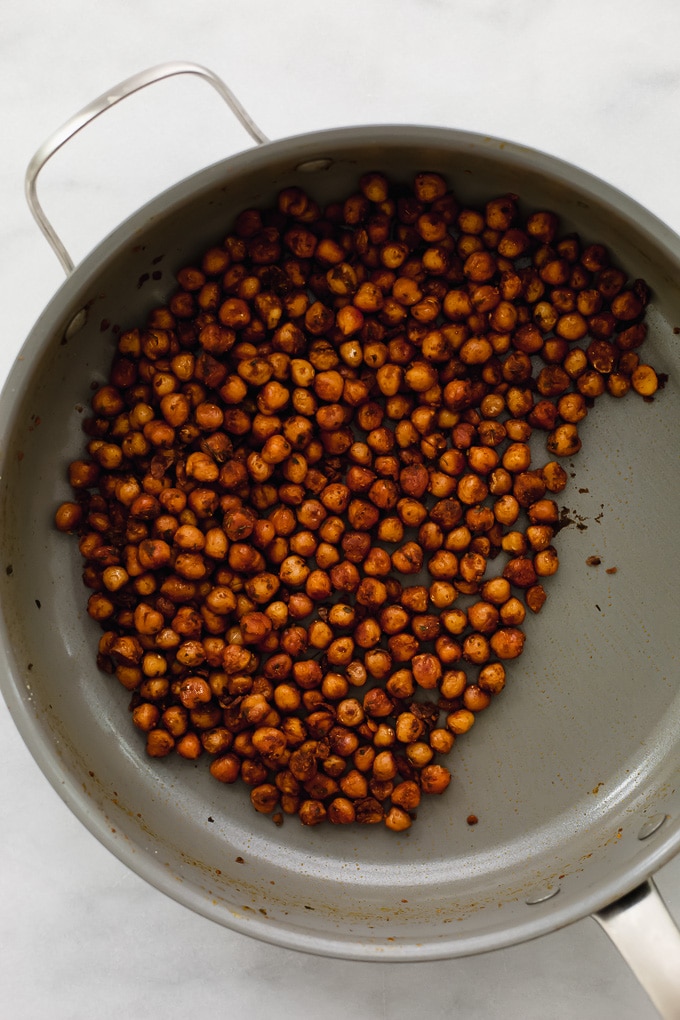 While the chickpeas toast in the pan, you'll get to work on the other wrap elements.

Prepare a super easy vegan tzatziki by whisking together cashew yogurt (or plain non-dairy yogurt of choice) with finely grated cucumber, lemon juice, vinegar, garlic, and salt. Pop it in the fridge to chill.

Next, toss together a simple slaw of sliced mini cucumbers, sliced red onions, chopped parsley (optional), vinegar, and salt. Let the mixture stand for at least 10 minutes, tossing every couple of minutes to evenly disperse the vinegar and slightly pickle the veggies.

If you're using tortillas or pita wraps, I recommend warming them through before serving. The warmth of a comforting wrap paired with the coolness of the tzatziki and veggie slaw is lovely. 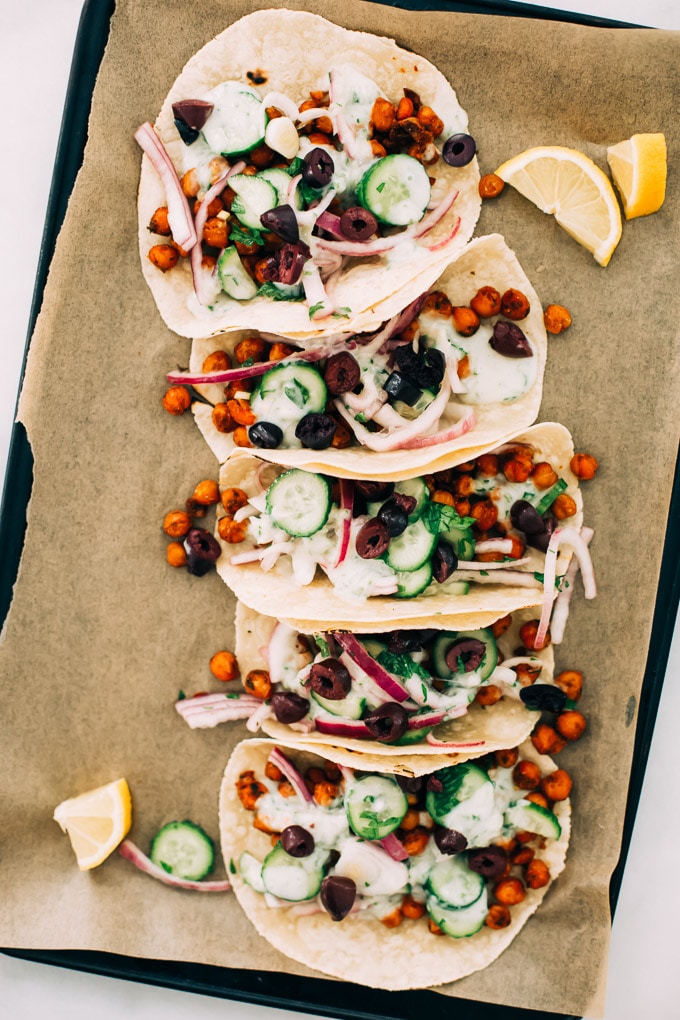 When you're ready to assemble, tuck a few generous spoonfuls of chickpeas into each wrapping device. Top with the veggie slaw and drizzle generously with the tzatziki sauce. If you'd like to up the protein and creaminess, slather the wraps with hummus before topping with the chickpeas.

If you'd like a salty pop of flavor, I recommend finishing the wraps with chopped kalamata olives. Super tasty if you're into olives.

Serve the prepared wraps immediately and store any leftovers in separate airtight containers in the refrigerator. 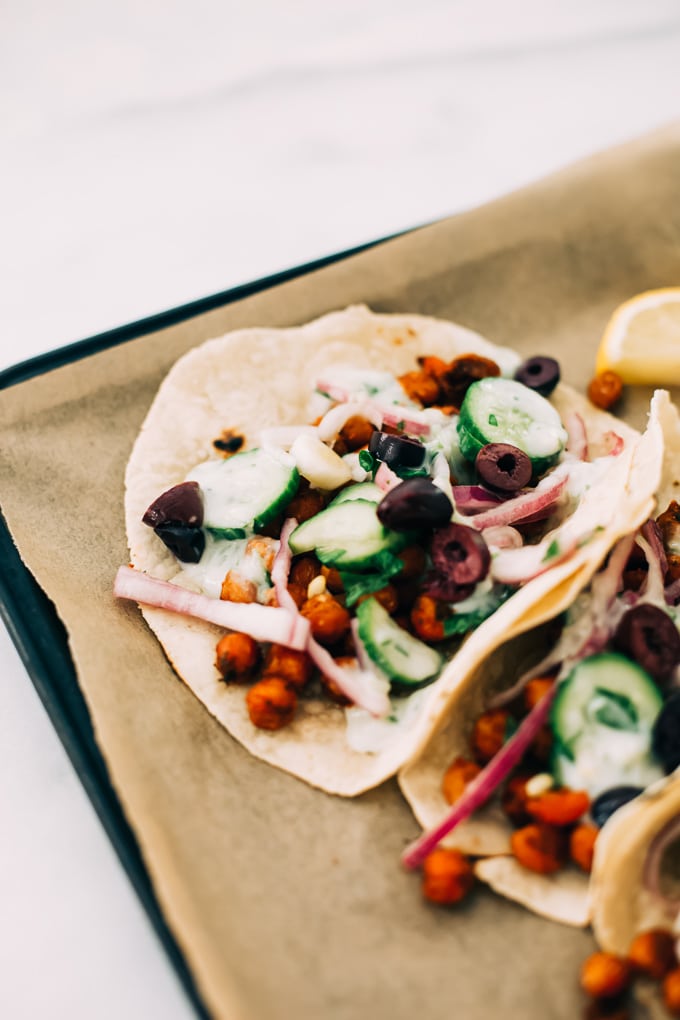 I hope you love these falafel spiced chickpea wraps. If you make them, let me know! Leave a comment, rate the recipe, and don’t forget to tag a photo #blissfulbasil on Instagram. 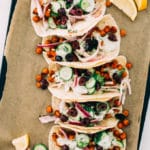 For the Spiced Chickpeas

For the Cashew Yogurt Tzatziki

For the Toppings + Wrap Base

*Keep in mind that the wrapping device you choose will affect how many people the recipe will serve/satisfy. Choose heartier options like pita pockets or flatbreads if you're looking to stretch the recipe out to serve more people. **To up the protein and creaminess, slather the wraps with hummus before topping with the chickpeas.