Alright, alright. You caught me. This tickled pink bloat busting protein power smoothie has more of a magenta hue than it does a pink one, but 'tickled magenta' rang a bit lackluster to the ear so the rules were bent. So call it red, ruby, magenta, plum, fuchsia, crimson, or whichever color floats your boat. Just be sure to try it, because this smoothie is packing protein, veggies, and fruit like you wouldn't believe. Twenty-six grams of protein, four servings of veggies, and three servings of fruit, to be exact. Plus 100% daily value of vitamin c, 14 g dietary fiber, and 1920 mg potassium. Now that's one powerful, plant-based protein smoothie. 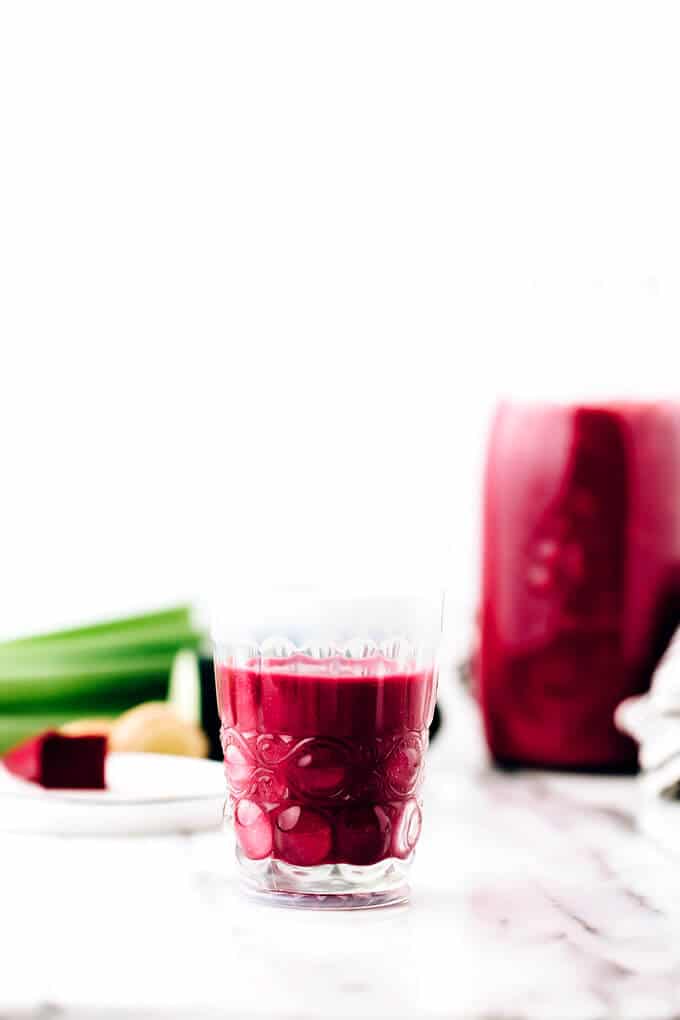 So what's in this rose-hued beauty? Great question.

Note: The below traverses slightly into TMI territory (lady-things edition), so please feel free to skip to the recipe if you're not up for a bit of cycle talk.

If you've been following along here for a while, then you might remember the post I shared in late December about the things I was afraid to tell you (but then told you). One of the things I mentioned was that since going off the pill last fall, I had been battling strange withdrawal effects like hair loss, dry skin, water retention/bloating, decreased appetite, etc.

Thankfully, nearly all of these symptoms have since disappeared. (For the record, I now have lots of wildly untamed baby hairs/horns at my hairline—Dan thinks they're cute, I think they're a real pain yet I'm grateful that my hair stopped falling out.)

The one symptom that continued to linger well into the new year was the water retention/bloating. Despite upping my water intake from 64oz. a day to 96oz. and sometimes even 128oz. (yes, a whole gallon), there were days when I could barely zip up my pants. And oddly, there were also days when my pants felt loose. Most blah-inducing of all, there were days when my body held on to so much excess water that even my face appeared bloated. It was weird but most of all, it was just really darn uncomfortable.

During one particularly bloated stint a couple months back, I typed the words "ovulation bloating remedy" into google and was greeted by a post from none other than the game-changing cycle queen herself, Alisa Vitti.

In her post, Alisa explains why cyclical bloating happens as well as natural remedies to combat it. Specifically, she outlines how hormonal imbalances (e.g., estrogen dominance) can cause symptoms that wouldn't otherwise be present. For instance, magnesium deficiency, which causes the body to retain water and salt, leading to that uncomfortable bloated feeling.

2) Her "Anti-Bloat-ini" juice of 1 beet, 4 celery stalks, ½ a cucumber, 2 stalks of kale, ½ bunch cilantro, and 1 lemon. It's a powerful, bloat-busting tonic thanks to the natural diuretics, tissue salts, and liver detoxifiers it contains.

I'm not much of a celery fan but by that point I was willing to try anything, so I whipped up a batch of anti-bloat-ini juice.

Correction: I misread the recipe (I blame the bcp withdrawal/bloating because why not) and whipped up a batch of anti-bloat-ini smoothie.

Upon first sip, I had my doubts about stomaching the thing, so I added two frozen bananas (bloat-busters of the fruit world), and gave it another whirl around the blender.

Well, bananas are miracle workers (as if we didn't already know it). It was delightful. Refreshing, subtly sweet, and incredibly satisfying.

I've been making this smoothie regularly since, tweaking and honing the recipe as I go. One morning, I omitted the kale and added two scoops of pumpkin seed protein powder instead, and that particular combination quickly took hold as my favorite.

Not only does this protein smoothie stave off that dreaded water retention and bloating, it also keeps me satisfied and energized until lunch.

I'm not sure if it's related, but my skin also seems to have more of a dewy glow to it these days. Whatever the reason, I'll take it. 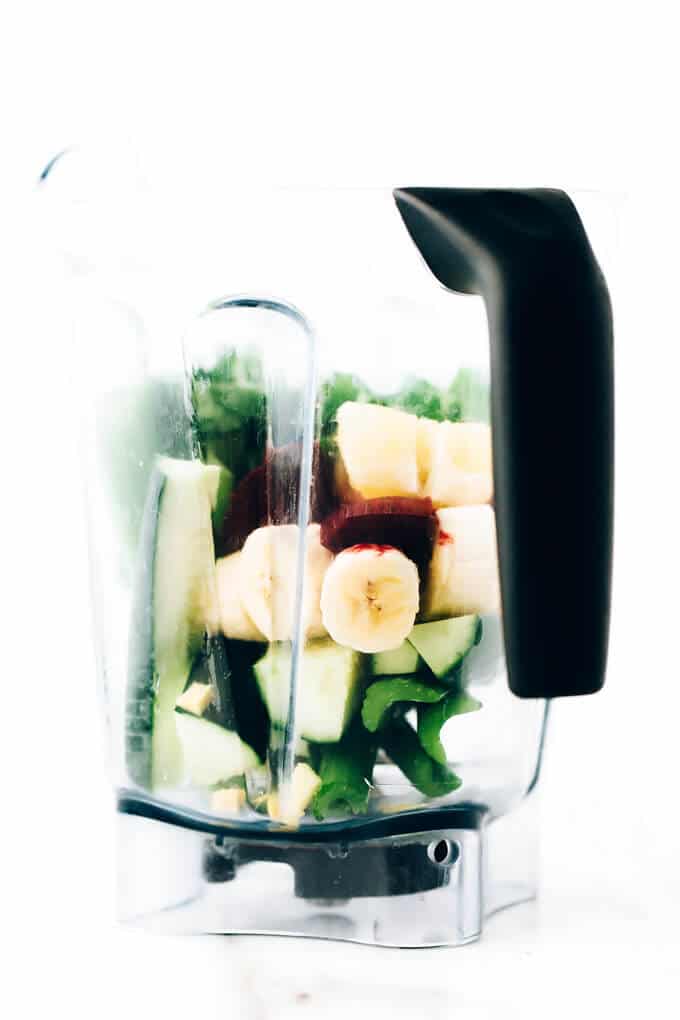 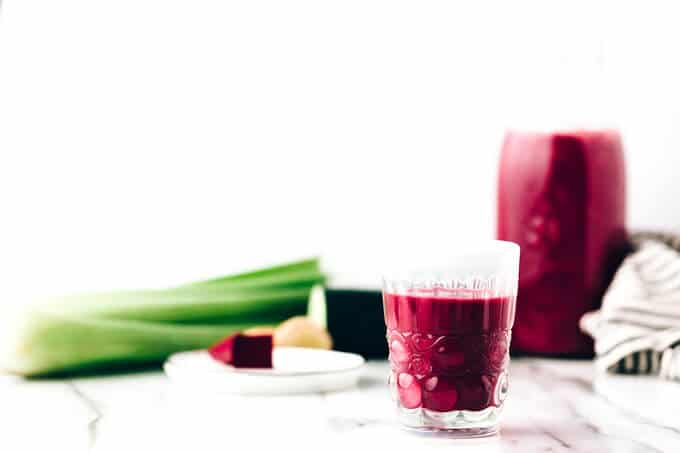 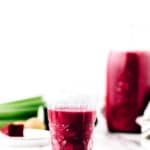 *I prefer to use frozen bananas because they cool the smoothie down and smooth out the texture of the protein powder; however, in a pinch, fresh bananas will work. You'll just want to add a handful of ice cubes to cool the smoothie a bit if you go that route. **For a slightly sweeter smoothie, use coconut water. ***I recommend using a pure, unflavored, and mild protein powder (e.g., pumpkin seed) to avoid meddling with the smoothie's natural flavor; however, if you have a favorite flavored plant-based protein that you'd like to try in here, feel free to give it a whirl. ****You do you. I love this smoothie exactly as is, but all tastes are different so feel free to adjust as you see fit. For instance, if you're new to veggie-packed smoothies or simply prefer a sweeter smoothie, feel free to add 1 to 2 soft, pitted medjool dates or cut back on the amount of celery. *****Keep in mind that if you're not used to consuming a plentiful amount of dietary fiber, this smoothie could cause a bit of airy bloating (if you know what I mean) the first few times you drink it but overall should encourage shedding of excess water when enjoyed as part of a well-balanced diet.