You are here Home » Soft & Chewy Naan | Vegan and Gluten-Free

This vegan and gluten-free naan is soft, chewy, and packed with lots of those beloved air bubbles. The dough is made with a combination of brown rice flour, potato starch, tapioca starch, psyllium husk powder, yeast, and almond yogurt. This naan is delicious topped with a drizzle of coconut oil, sprinkling of salt, and garnish of fresh cilantro; however, it also makes the most incredible wrap since it's pliable enough to bend in half without tearing or falling apart. 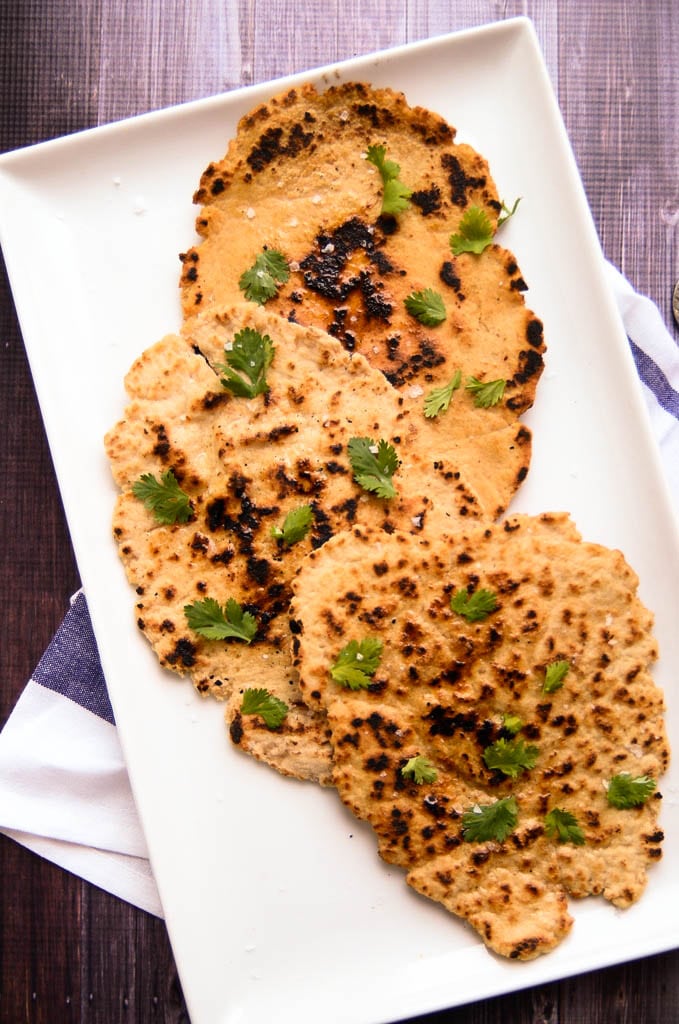 While Dan was camping over Memorial Day weekend, I spent much of my husband-less days in the kitchen testing out a handful of recipe ideas I had been working on for quite some time. This vegan and gluten-free naan was simultaneously the most inspiring and haunting recipe idea on the list, and I put off making it until late Saturday evening out of fear of disappointment.

Most of the gluten-free naan recipes I've stumbled across over the years contain dairy and look very flat and almost cakey in consistency; all completely devoid of those charmingly puffy air bubbles that suggest tender-chewiness. In the days leading up to the big naan-making attempt, I had spent hours researching gluten-free flours to get a better sense of what could and would not work to create a naan with the right consistency. Given what I had learned, I wrote out the measurements for a recipe that I thought would have the greatest chances of working, yet I was still terrified to attempt it.

If you Google gluten-free baking, you'll find some real horror stories (even from people who truly know what they're doing in the kitchen). Rock-hard loaves of bread, pizza crusts with the consistency of sand, brownies that adhere to your chocolate-seeking teeth like cement. Stories of unrequited labors of love that will both make you laugh and convince you that gluten-free baking is an uphill battle only entered into by the naïve. Guilty as charged.

Around 7pm on that warm Saturday evening, I decided it was time to put an end to procrastination and my fear of flatbread. I sifted, poured, mixed, kneaded, and waited as the dough sat rising on our counter. I peered into the bowl every 20 minutes just to be sure the dough hadn't taken on a life of its own. It hadn't. In all honesty, it hadn't done much of anything, rising included. However, I figured I best not judge a dough ball by its size, and I carried on with the gluten-free, vegan naan experiment.

I cut the dough into four pieces and began rolling each to the most naan-like shape I could finesse. I heated a cast iron skillet over high heat, dropped in a touch of coconut oil, and placed the first piece of dough into the pan. As the first side cooked, there wasn't much to admire; however, as the dough was flipped and cooking on the second side, something amazing happened. A big, charming, puffy bubble of air formed. I let that first piece finish cooking, drizzled it with coconut oil and a sprinkling of salt and tore right into it. Warm, tender, and perfectly-chewy naan with just the slightest bit of crispness from being cooked up in the pan.

I was so in shock that the recipe came together on the first try that I immediately remade it just to be sure it wasn't some sort of amazing accident the first time around; it wasn't. It worked just as well the second time.  Gluten-free, vegan baking success.

The dough is made from a combination of brown rice flour, potato starch, tapioca starch, psyllium husk powder, yeast, and almond yogurt. On its own, brown rice flour creates a dough that crumbles, sticks, and lacks the elasticity that is so necessary when making this type of flat bread. That's where the potato starch, tapioca starch, and psyllium husk powder step in and work their binding magic. Each one helps hold the dough together in a slightly different way, so all three are necessary to get the right consistency. Potato starch and tapioca starch are typically the easiest of the three to find, while psyllium husk powder can be a bit trickier to obtain. Our local Whole Foods carries it in the bulk spice/baking goods section, but you can also find it online. It works like a charm in baked goods that are typically highly reliant on gluten (e.g., pizza dough, chewy flatbreads, pasta). Most recipes only call for a few tablespoons, so it's a worthy investment if you anticipate lots of gluten-free baking in your future.

This naan is delicious with just a drizzle of coconut oil, sprinkling of salt, and garnish of fresh cilantro; however, it also makes the most incredible wrap since it's pliable enough to bend in half without tearing or falling apart. I recommend filling it with a variety of your favorite fresh vegetables with a light drizzle of oil and a pinch of salt. 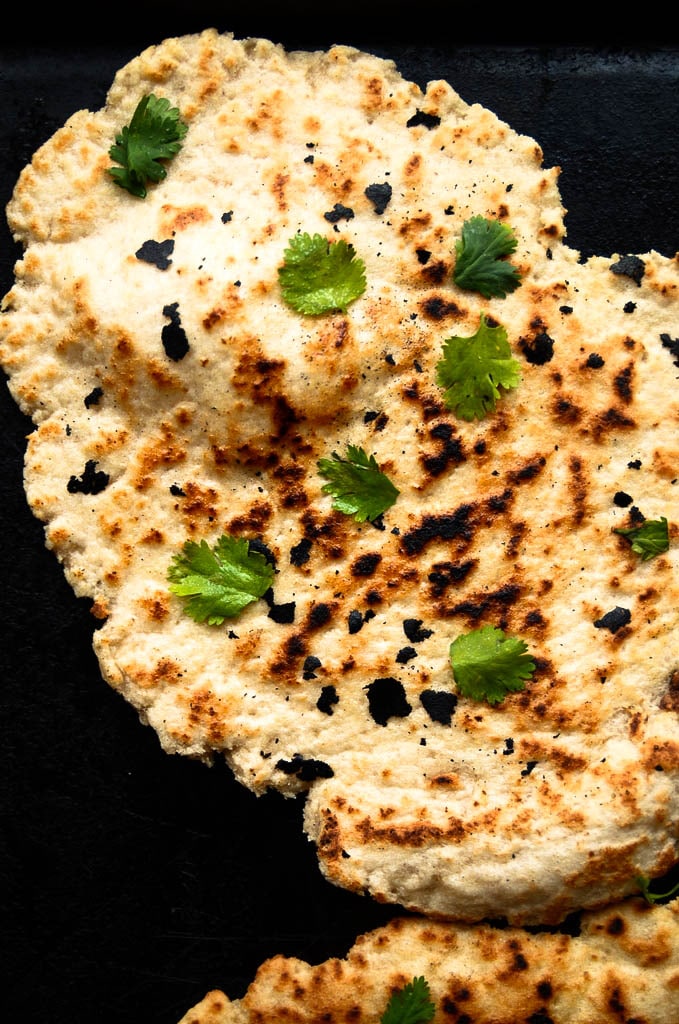 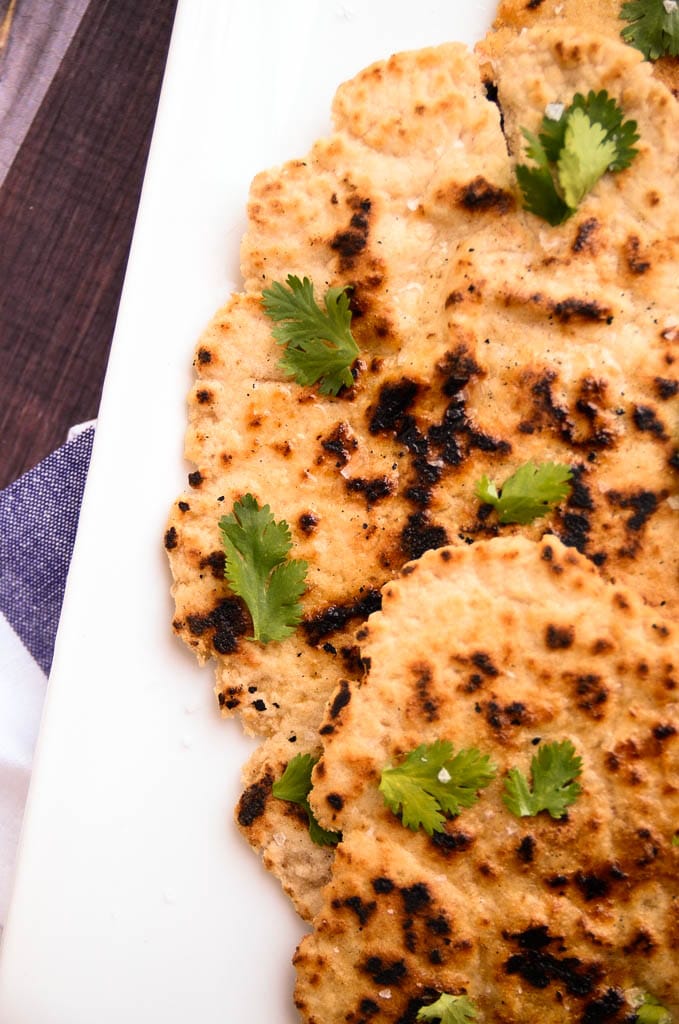 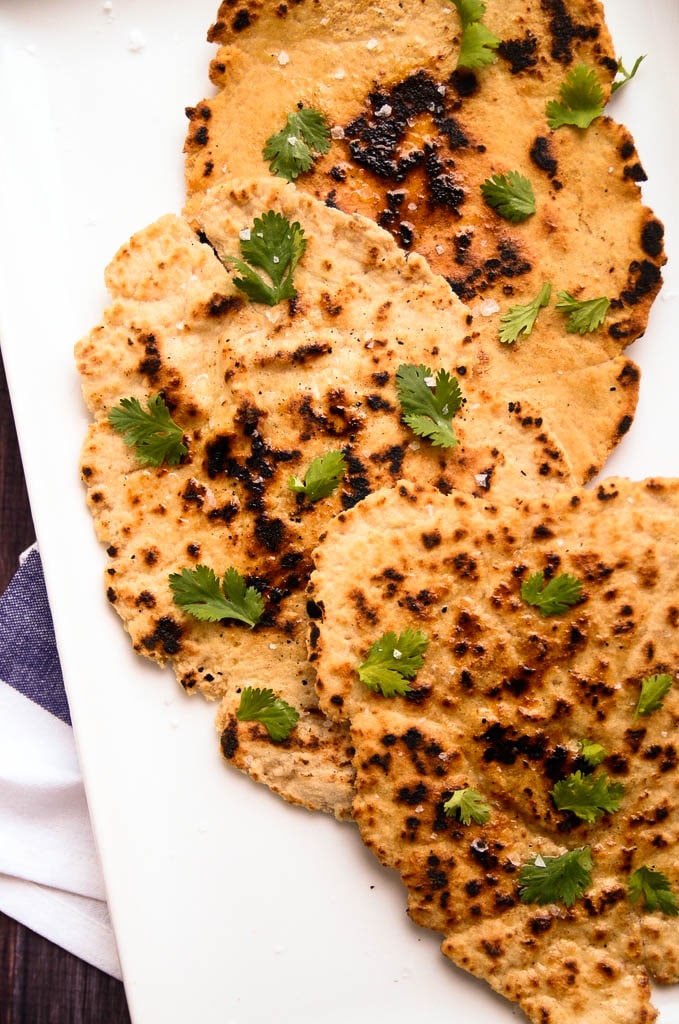 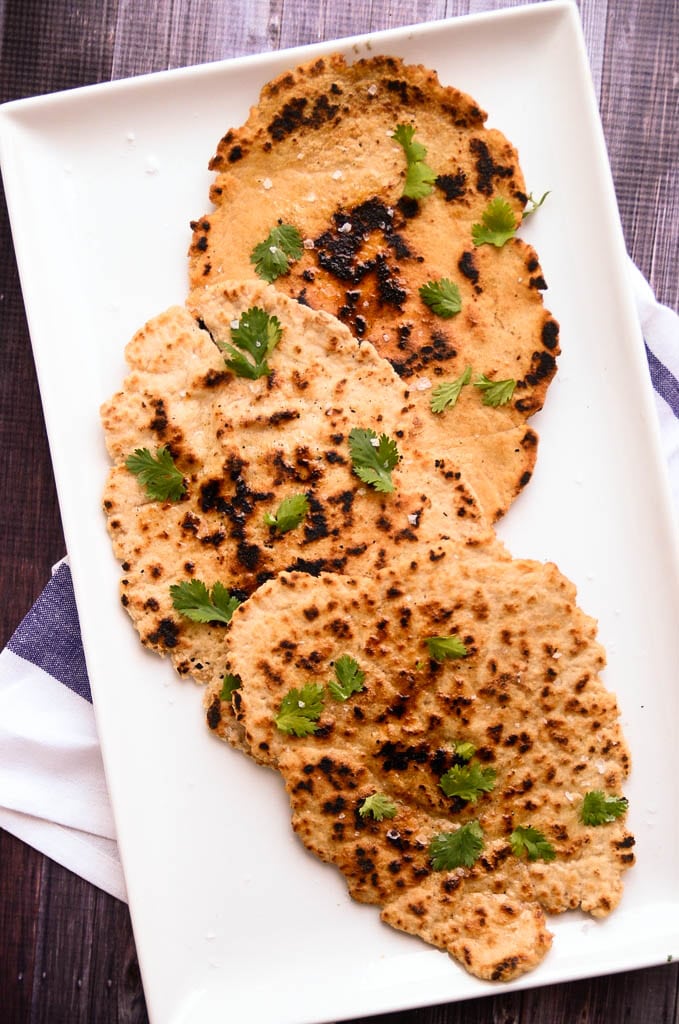 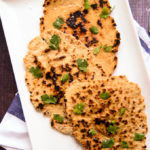 This vegan and gluten-free naan is soft, chewy, and packed with lots of those beloved air bubbles. The dough is made with a combination of brown rice flour, potato starch, tapioca starch, psyllium husk powder, yeast, and almond yogurt. This naan is delicious topped with a drizzle of coconut oil, sprinkling of salt, and garnish of fresh cilantro; however, it also makes the most incredible wrap since it's pliable enough to bend in half without tearing or falling apart.
Course Bread, Snack
Cuisine Gluten-Free, plant-based, Vegan
Prep Time 1 hour 15 minutes
Cook Time 20 minutes
Total Time 1 hour 35 minutes
Servings 4