This vegan golden rice is a flavor bomb of a dish. Bursting with anti-inflammatory turmeric, it packs a double-punch—taste and nourishment wrapped up in one meal. Plus, it comes together in less than thirty minutes and requires just a handful of ingredients! Doesn't get much better. 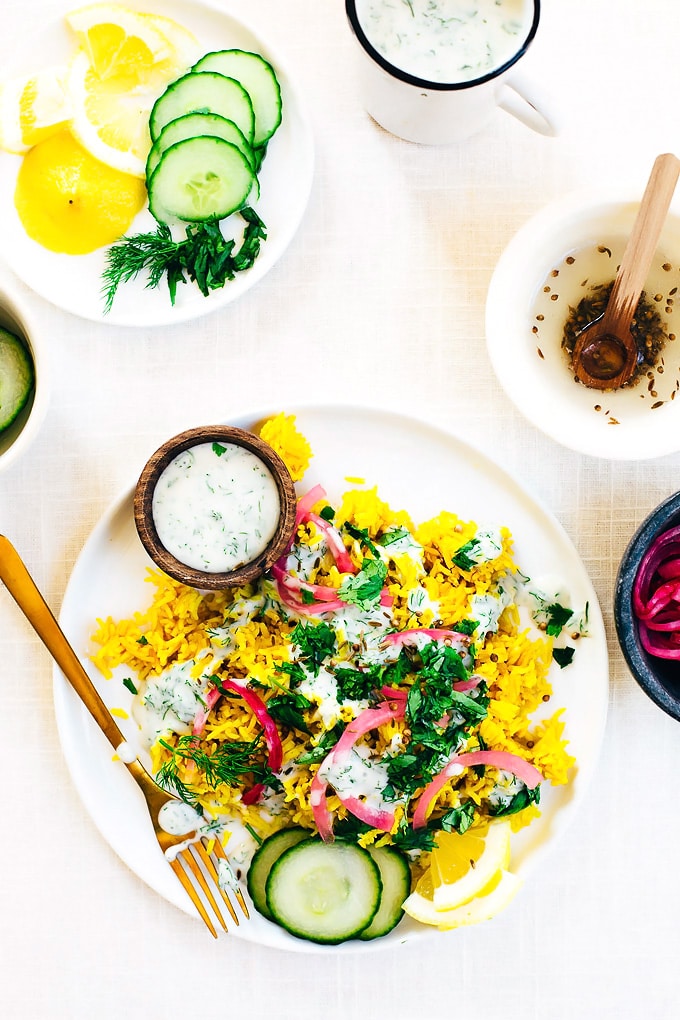 This rice is inspired by the "golden" trend that's taken the blogging world by storm over the last handful of years. I believe the only "golden" recipe I've shared, to date, is the one for these golden granola clusters.

When it comes to golden lattes and power balls, there are plenty of lovely recipes already in existence out there in the blogosphere. No need to reinvent the wheel, and you know I like to keep my recipes fresh and somewhat cutting edge.

From what I've gathered, there aren't any vegan golden rice recipes out there yet. I mean, I'm sure there are somewhere—the internet's a big place—but I haven't noticed any.

And so, when the idea popped into my mind while recipe brainstorming last week, I rolled with it and got to testing the very next day.

The results did not disappoint, and I'm very excited to share this recipe with you today! 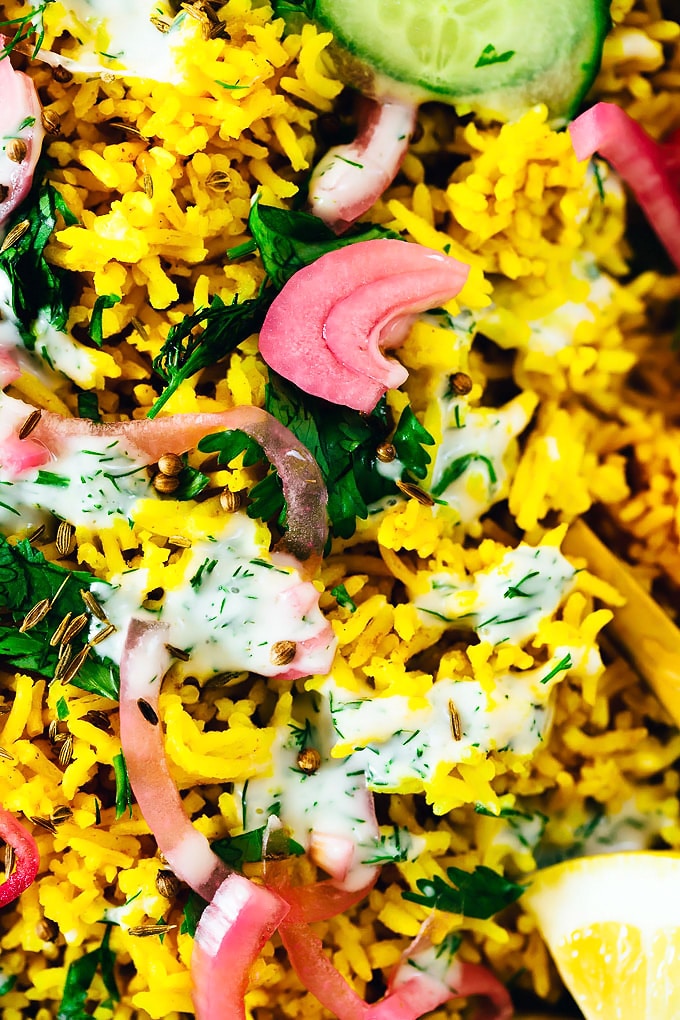 This vegan golden rice is vibrant, aromatic, and fresh.

Its mix of textures and flavors creates a dish that's alluring, inviting, and incredibly satisfying. 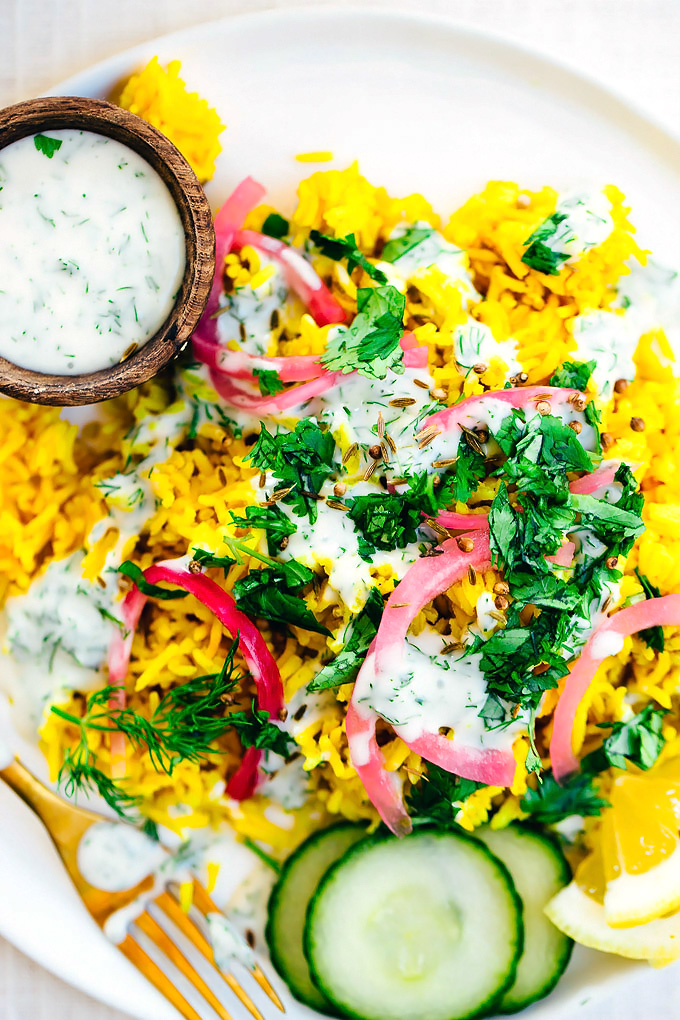 Did I mention it's super affordable to make, too? Although there's an upfront investment in the spices (if you don't already have them), overall, this dish comes together for a very reasonable price. And in under 30 minutes, too.

Ticking all the boxes today.

To make it, you'll start by simmering basmati rice, water, turmeric, and sea salt together for 10 minutes, or until most of the water is absorbed. Then, remove the pan from the heat and let the rice sit, covered, for 10 minutes before fluffing with a fork.

While the rice cooks, you'll prepare the cumin oil by heating coconut oil (or oil of choice), cumin seeds, and coriander seeds in a small sauté pan over medium heat. Heat the mixture for just two to three minutes, or until the seeds begin to simmer and crackle.

This oil is drizzled over the warm rice and offers the dish a rich, aromatic flavor and intoxicating scent. Please don't skip it! ☺️ 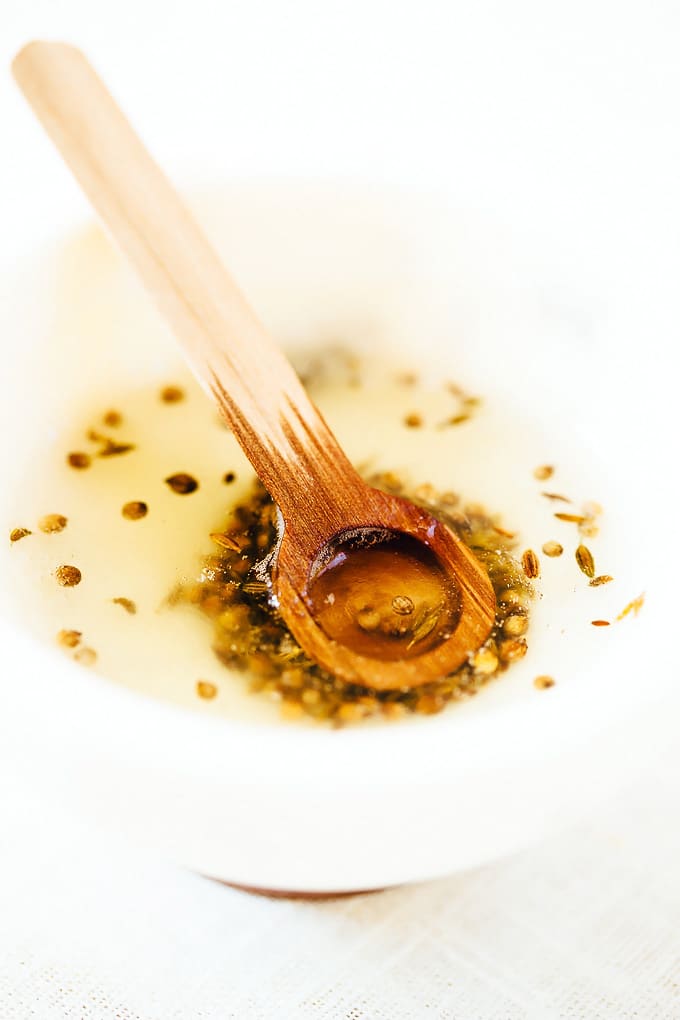 Serve the rice drizzled with the oil and dill yogurt sauce.

See the recipe notes for instructions on how to (easily) make the pickled veggies! 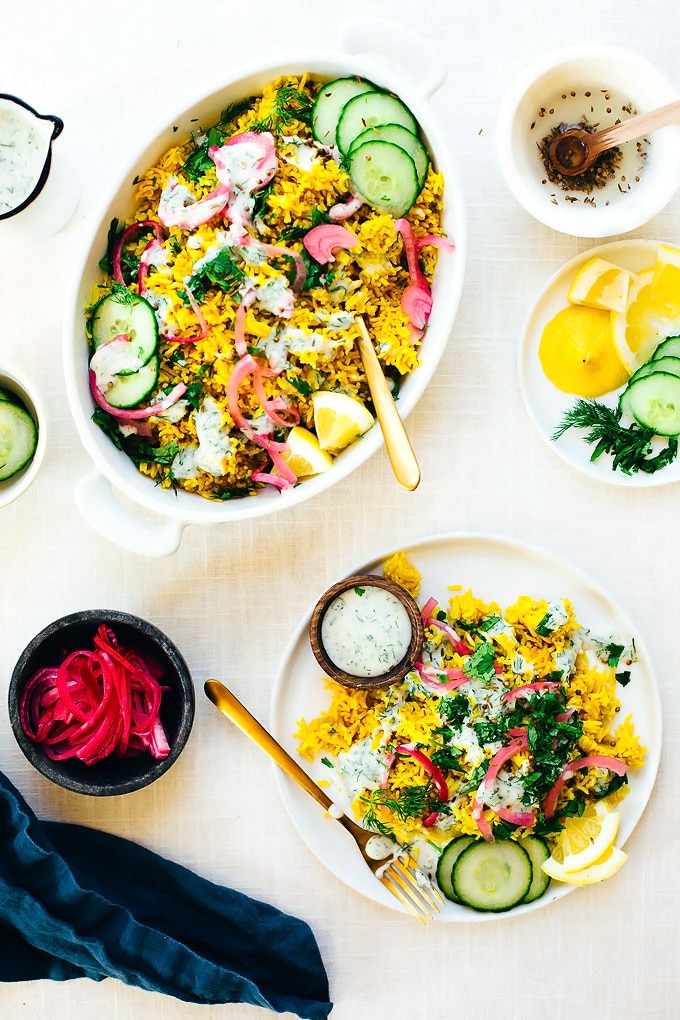 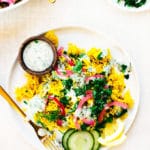 This vegan golden rice is a flavor bomb of a dish. Packed with anti-inflammatory turmeric, it packs a double-punch—taste and nourishment wrapped up in one meal. Plus, it comes together in less than thirty minutes and requires just a handful of ingredients! Doesn't get much better.
Course Dinner, Rice
Cuisine Gluten-Free, plant-based, Vegan
Prep Time 10 minutes
Cook Time 20 minutes
Total Time 30 minutes
Servings 4
Author Ashley

For the Golden Rice

For the Dill Yogurt Sauce

*To make the pickled cucumbers and red onion, get two small to medium jars. Fill one with thinly sliced cucumber and the other with thinly sliced red onion. Then, fill about two-thirds of the way full with white vinegar. Fill the remaining one-third with water. Add a generous pinch of sea salt, secure lid, shake, and refrigerate for at least four hours but preferably overnight. Serve and refrigerate leftovers.