This easiest vegan cinnamon almond granola requires just 6 ingredients and about 10 minutes to make. Almonds and rolled oats are tossed with a drizzle of maple syrup and melted coconut oil, a sprinkle of cinnamon, and a pinch of sea salt. The mixture is spread into a single layer and baked for 8 minutes, or until golden. The result is a granola that's crisp, subtly sweet, and totally snack-worthy. Sprinkle it over coconut yogurt with a drizzle of pure maple syrup or enjoy it straight from the jar. 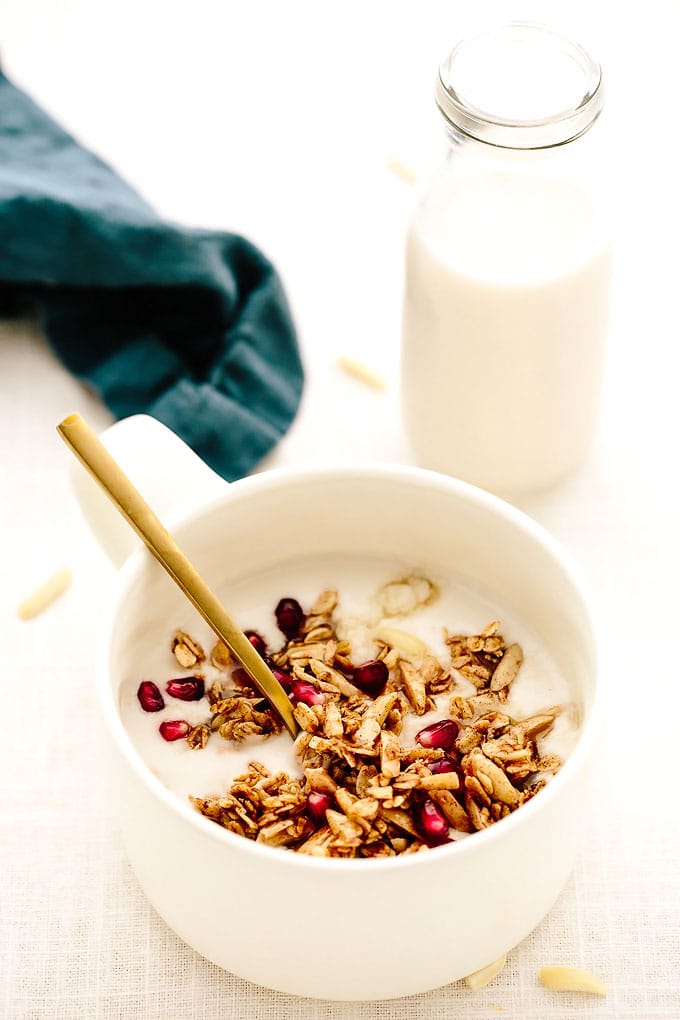 If there's one thing I've learned over the years, it's that easy, trusty, no-frills recipes are often the most beloved.

The phrase "less is more" certainly rings true in the world of cooking and baking. I've learned that while it's important to stay creatively attuned in the kitchen, it's equally as important to maintain a sense of modesty when developing recipes.

Why? Because time is precious and many things—granola, for example—can be extraordinarily delicious without much fussing or ingredient hunting at all. 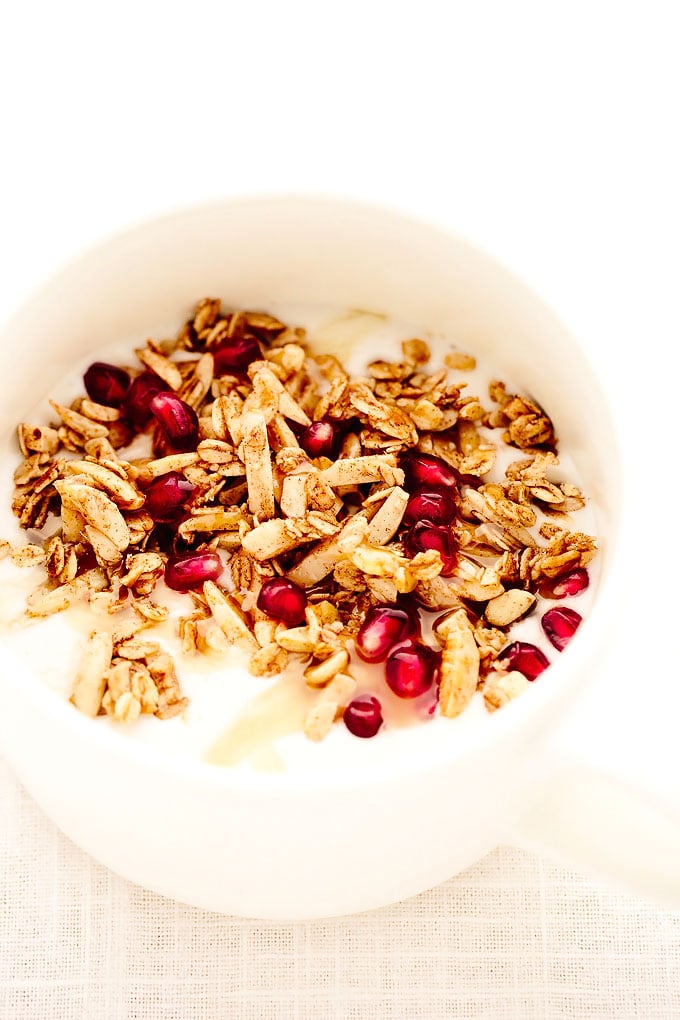 But what it lacks in neediness and fussiness, it makes up for in crunch and delectability.

This granola is subtly sweet, crisp, satisfying, nourishing, and comforting all at once.

It'll beckon your fingers to continually reach back for "just one more cluster," and it'll have you swooning over its effortless ability to transform ordinary morning yogurt bowls into memorable parfaits.

The triple-threat of granolas: simplicity, deliciousness, and charm wrapped up in one cinnamon-dusted package. 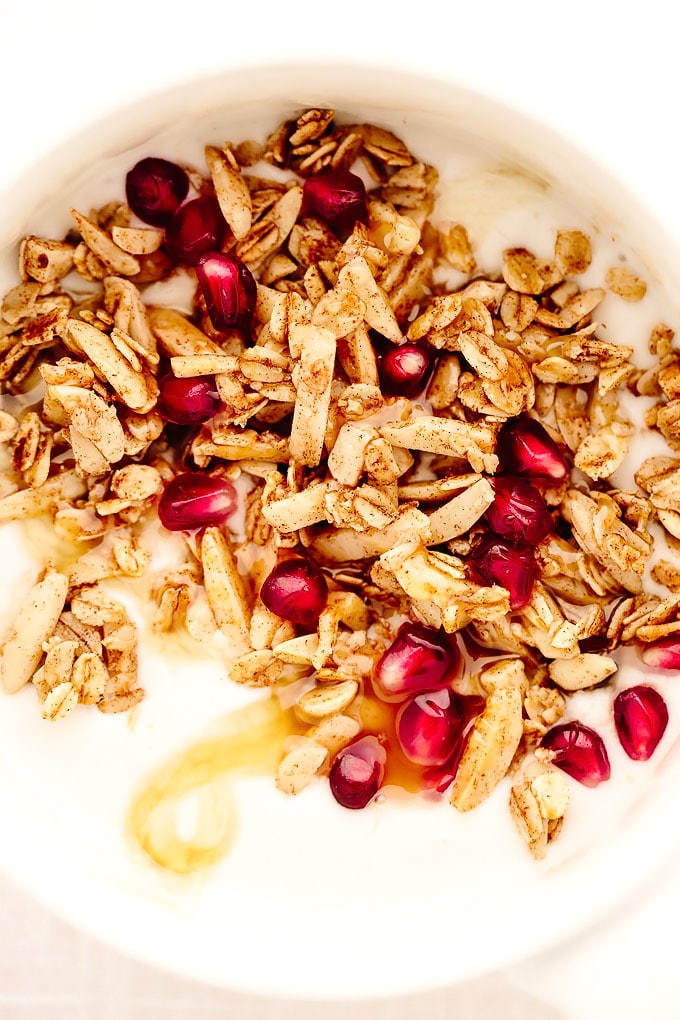 To make this easiest vegan cinnamon-almond granola, you'll add everything to a medium mixing bowl and give it all a quick toss to evenly coat... 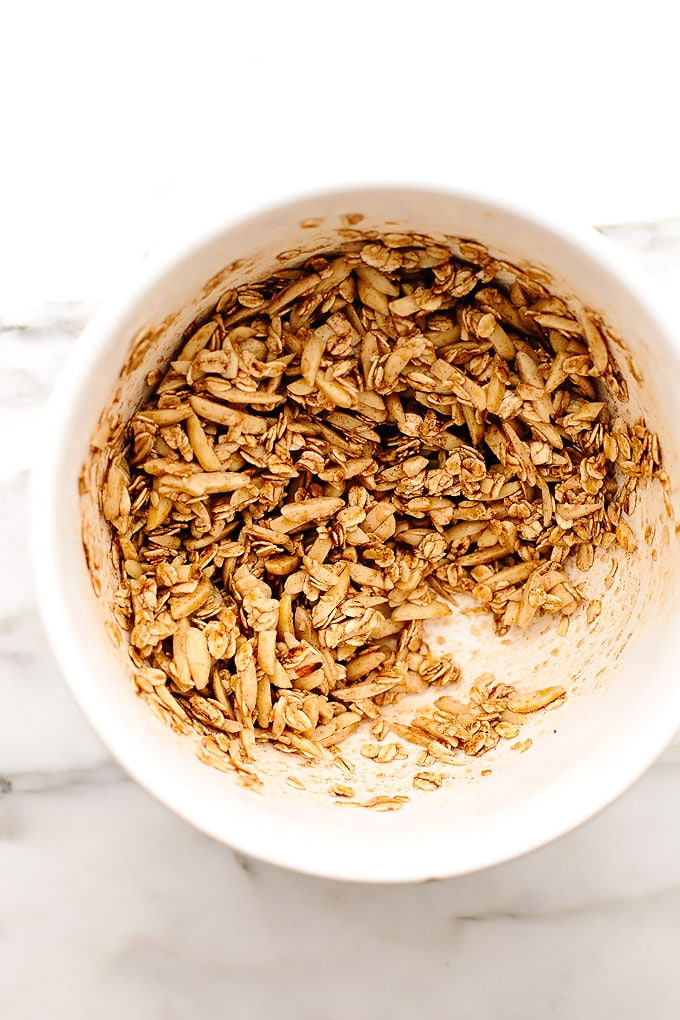 Then, spread the granola mixture evenly into a lined baking pan and bake for 8 to 12 minutes, or until lightly golden and wafting a warm, toasted scent.

When baking granola, it's best to rely on scent, color, and time rather than touch, because it's typically soft and crumbly until it's given time to properly cool, set, and cluster. 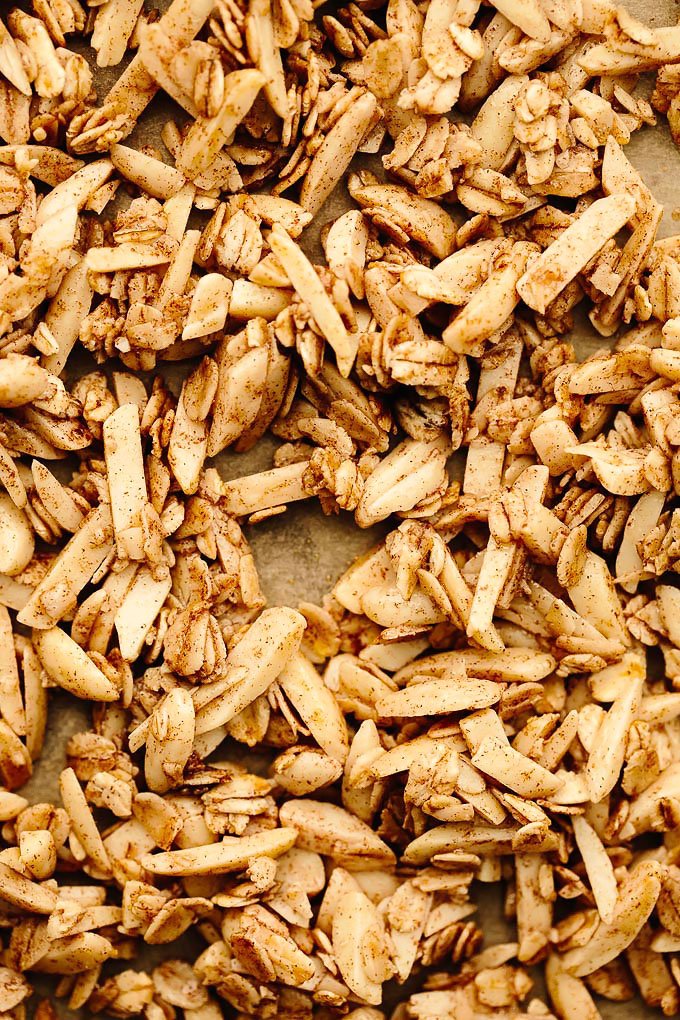 Allow the granola to cool completely on the pan before moving or enjoying. As it cools, it will firm up and cling together into nutty clusters.

Once it's cool, break the granola into clusters of desired size and transfer to an airtight glass jar.

This recipe makes a small batch of granola—about 1 ½ cups—but feel free to double or even triple it if you'd rather make a larger batch. Just be sure to use a large pan instead of a small one to ensure it has plenty of breathing room while it bakes.

I love sprinkling this granola over vanilla coconut yogurt with a drizzle of pure maple syrup. It's also lovely served atop smoothie bowls or enjoyed all on its own. 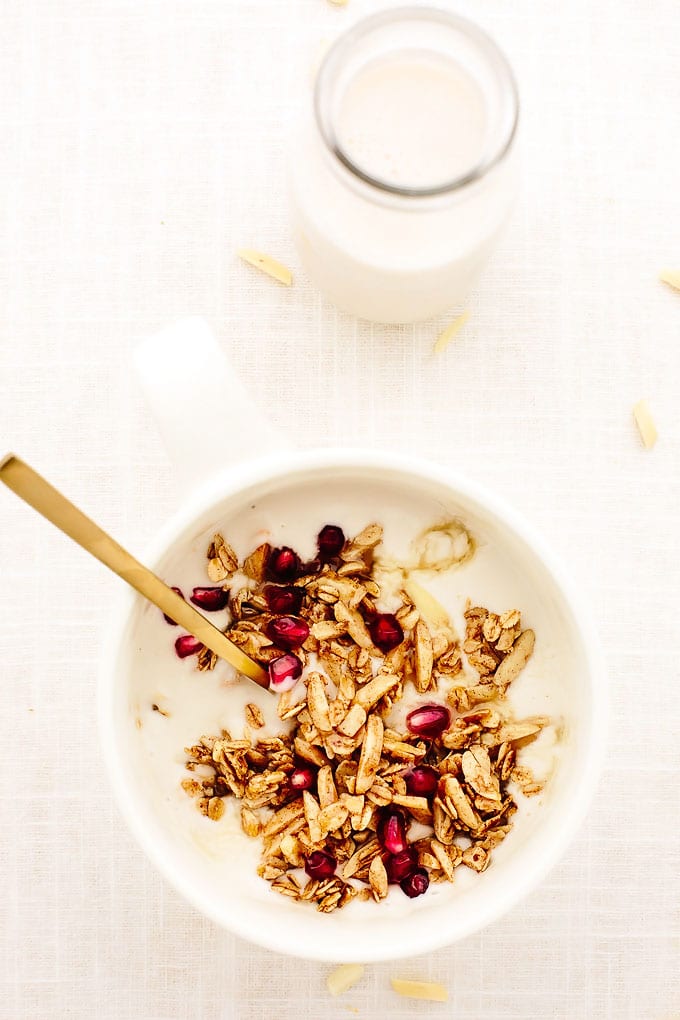 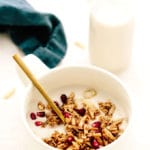 This quick and easy vegan granola requires just 6 ingredients and about 10 minutes of your time. Almonds and rolled oats are tossed with a drizzle of maple syrup, pat of melted coconut oil, sprinkle of cinnamon, and pinch of sea salt. The mixture is spread into a single layer in a lined pan and baked for 8 minutes, or until crisp and golden. The result is a granola that's crisp, subtly sweet, and totally snack-worthy. Sprinkle it over coconut yogurt with a drizzle of pure maple syrup or enjoy it straight from the jar.
Course Breakfast, Snack
Cuisine Gluten-Free, plant-based, Vegan
Prep Time 2 minutes
Cook Time 8 minutes
Total Time 10 minutes
Author Ashley