This no-churn vegan peanut butter ice cream requires, no joke, just 6 ingredients, and that's including sea salt. Better yet, you'll only need to spend 10 minutes in the kitchen to make it. It's ultra creamy, easy to scoop, nutty, sweet, and just the right amount of savory. It's delicious all on its own but to up the decadence, top it with chopped dark chocolate, cacao nibs, or fresh berries // berry compote for a dessert rendition of PB + J. 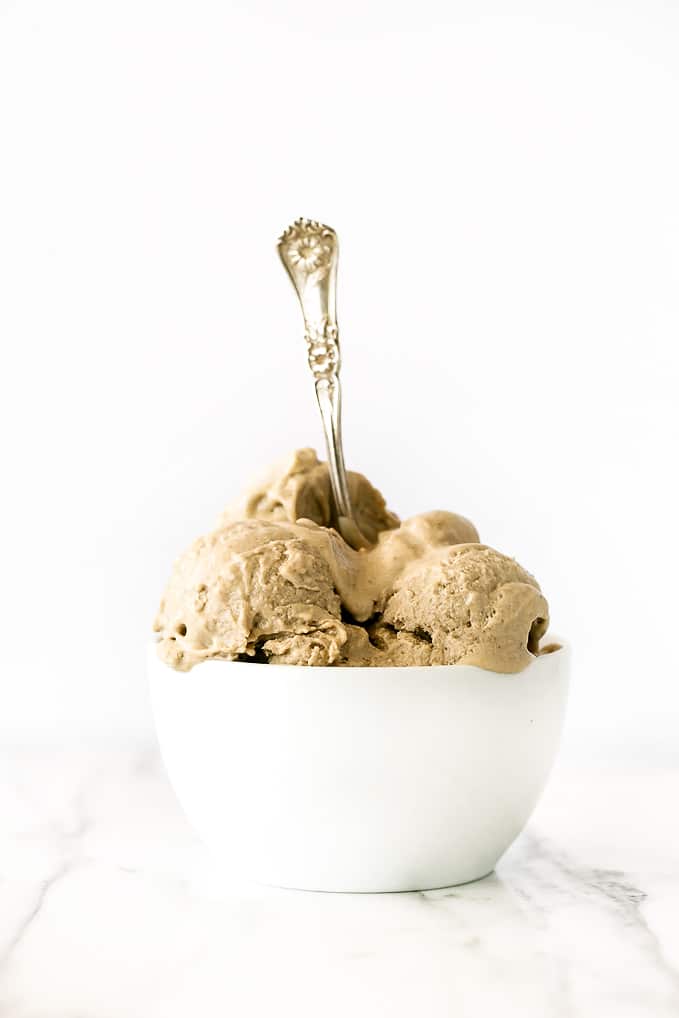 I promise, we will absolutely talk No-Churn Vegan Peanut Butter Ice Cream. But first, I want to talk about something else. Have you heard about the cycle of the 3 P's? Perfectionism, procrastination, and paralysis? Up until last summer, I certainly hadn't. If you haven't a clue what in the world I'm talking about, good, allow me to explain. Alternatively, if you're eager for ice cream chit-chat (I feel you), scroll past the paragraphs below and begin reading after the next ice cream photo. . .

Between coming down from the excitement of last weekend's festivities and battling a pesky summer cold, I've been struggling to keep pace with what seems to be an unending list of to-do's this week. Since this is my last week of work before Dan and I leave for a three-week trip to South Africa (super excited—details to come in Friday's post), I placed about twice the usual number of tasks on my to-do list. Too many to-do's + summer cold + pressure to finish everything this week = what I've come to refer to as "perfectionistic procrastination paralyzation station." Just for kicks, try saying that ten times fast without faltering.

The Cycle of the 3 P's: Perfectionism, Procrastination, Paralysis

Despite a nearly lifelong (not-so-) merry-go-round with it, my first time hearing about this funky cycle was just last summer. It was June, and I was just beginning to dig into recipe development and photography for the book. I would start each week with an organized schedule of daily to-do's (i.e., two recipes on the to-test list and two recipes on the to-photograph list each day). This was absolutely a manageable amount of work—in fact, it was almost identical to the work I did for the blog each and every weekend—but I repeatedly stalled and tackled other tasks instead of hunkering down on book work.

Even with a well-organized system and a precise list of to-do's, I found myself unsure how or where to start. Instead of starting, I either froze and stared off into space (paralysis) or I cleaned the house, repeatedly checked emails, randomly found things to re-code on the site, wrote and photographed blog recipes, surfed Pinterest for photography inspiration, etc. (procrastination). Although I felt "busy" and was technically accomplishing a variety of different tasks, none of those tasks were the right ones to be directing my attention toward. Because the "right task" to attend to is almost always the one that's making us the most uncomfortable—that nagging, intimidating to-do that stirs up feelings of vulnerability or unease. The one that, once it's complete, will provide momentum and motivation to effortlessly encourage us forward in the direction we've set our sights on.

Nearly three weeks into this cycle, instead of having 30 book recipes photographed (again, totally doable), I had only photographed five. Frustrated, defeated, and confused, I typed the words "paralyzed by procrastination" into the Google search bar. Seconds later, the titles from a flood of search results all pointed to the same thing: I was caught in the cycle of the 3 P's. 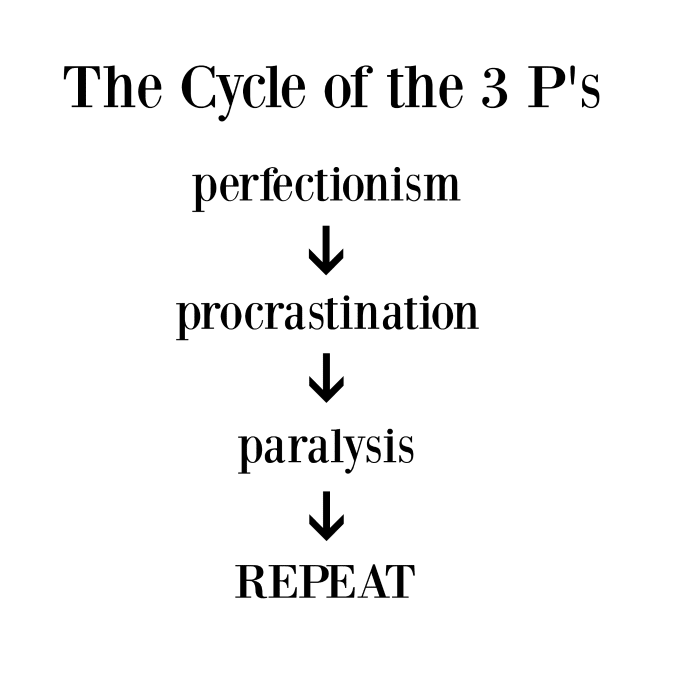 Information is power and by identifying the cycle as well as its underpinnings, I learned how to halt and even prevent it. Of course, there are still times (read: this week) when I unintentionally hop on the triple P wagon and go for a spin. But it rarely takes more than a day or two to figure out what's happened and then I regroup, recenter, and hop off.

Perfectionism: The Root of the Cycle

For most people, myself included, the cycle starts with perfectionism. The biggest B of all the P's in my experience. The idea that something has to be perfect causes me to procrastinate (P²) and when the tasks build up to an insurmountable height, I freeze (i.e., Paralysis—P³). The funny thing about perfectionism? It pretends to be useful when, in reality, its sole and self-proclaimed "useful" function is to prevent us from doing anything that's actually worth doing. It's a self-sabotager extraordinaire.

For example, last summer my internal dialogue was sounding a whole lot like this. . .

Fool me once, shame on you. Fool me twice, still shame on you, Perfectionism. You are a false promiser, an opportunity squasher, and a dream dangler.

If we chase perfection, those hours we delayed eventually become days, the days inevitably become weeks, the weeks become months, and the months become years. I don't know about you, but I don't want to end up years deep in my hopes and dreams without a thing to show for it because I was waiting for perfect. Because although perfection would love for us to believe her sneaky tale, she just isn't attainable.

But guess what, we don't have to wait for perfection to accomplish our to-do's, goals, or even our dreams. Perfectionism is just a mask we wear to protect ourselves, and if we peel back that bossy, naysayer mask, we'll discover perfectionism's true identity: a fearful little mouse. Seriously. I envision a little mouse sitting in the driver's seat of a piece of machinery that's far too big for her britches. For you, maybe it's a fearful lamb or even a fearful lion. Feel free to imagine whichever frightened little critter feels most meaningful to you.

Nothing makes that little mouse more fearful than uncertainty, because uncertainty has the potential to breed both vulnerability and failure. So in an effort to protect, that little mouse encourages us to delay action until we're absolutely certain we can execute perfectly, thus, also guaranteeing our success. But that sense of certainty never comes, so we end up in a perpetual delay. And sometimes all that stalling comes with the secondary consequence of diminishing motivation, confidence, and inspiration.

At its heart, I think we can all agree that fear is well-intentioned, attempting to protect us from each and every potential threat no matter how big or small. The irony is that the space that holds our fears—be it the thing that makes us feel vulnerable or the thing that could potentially make us feel like a "failure"—also holds our wishes, hopes, and dreams. So it's difficult to have one without the other. Talk about a predicament.

Lucky for us, conquering our fears can be just as rewarding if not more so than achieving those wishes, hopes, and dreams. Seriously. Take a moment to reflect on some of the most rewarding and fulfilling experiences or achievements in your life. Was the path that paved the way perfectly groomed with a predictable and certain route to the finish line? Or were there some unmarked roads, funny looking detours, and fear-inducing turns along the way?

Oftentimes, the best paths, the ones that lead to great places, are overgrown and riddled with thorns. However, the act of moving forward in the face of fear and despite thorny uncertainty is the process that leads us to the real magic. We grow stronger, braver, and more determined. 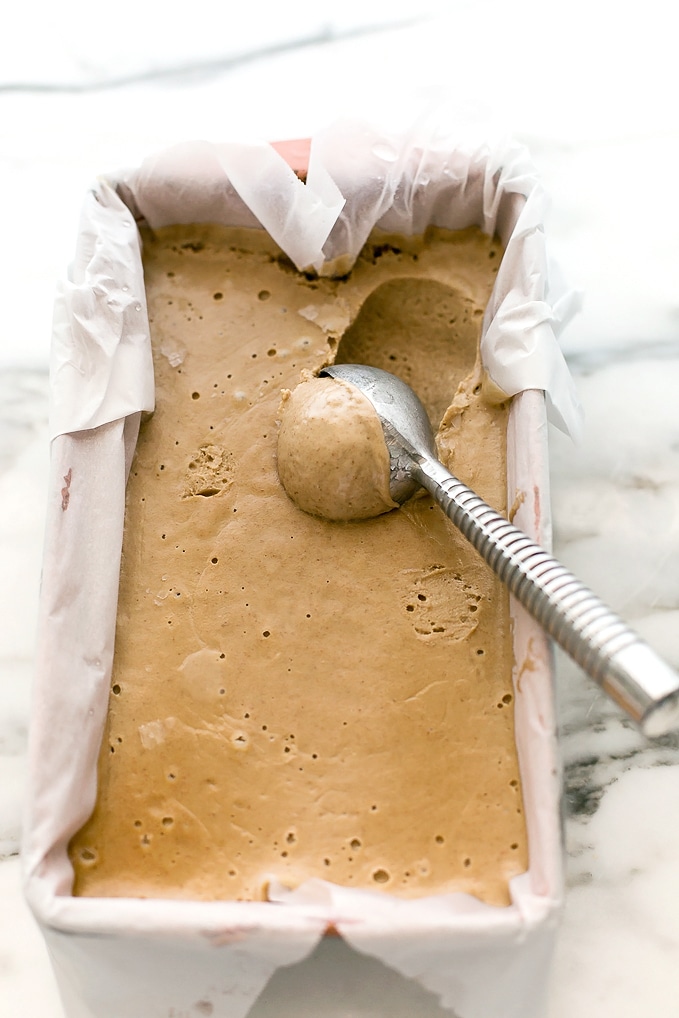 Speaking of determined, despite the longest intro ever, I'm still determined to chat peanut butter ice cream if you are. Ready? Let's go.

This no-churn vegan peanut butter ice cream requires, no joke, just 6 ingredients, and that's including sea salt. Better yet, you'll only need to spend 10 minutes in the kitchen to make it.

3| Pour that sweet, creamy, peanut-buttery mixture into a lined pan. 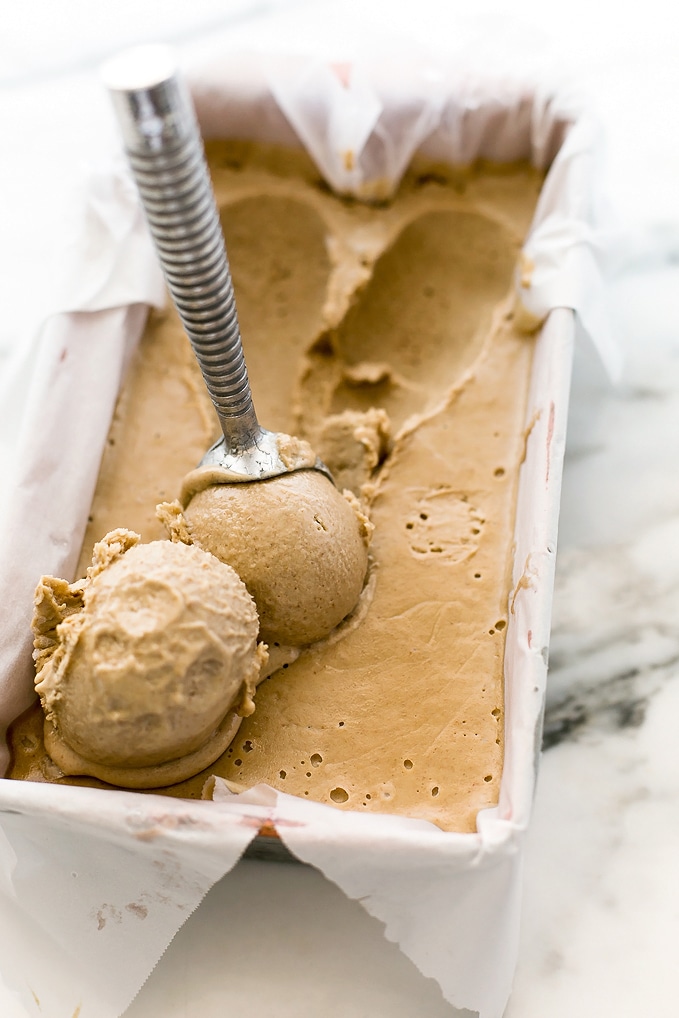 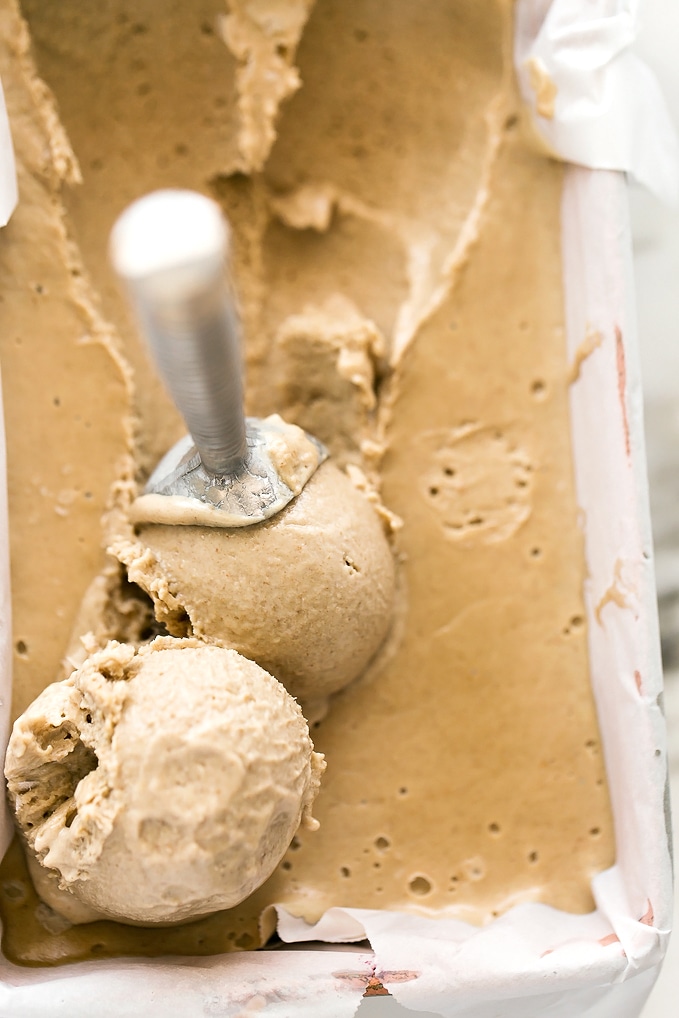 This ice cream is ultra creamy, easy to scoop, nutty, sweet, and just the right amount of savory.

It's delicious all on its own but to up the decadence, top it with chopped dark chocolate // cacao nibs, a drizzle of my 5-minute caramel sauce, or fresh berries // berry compote for a dessert rendition of PB + J.

And be sure to stay tuned, because I'll be sharing a recipe that features scoop after scoop of this dreamy ice cream on Friday! ♥ 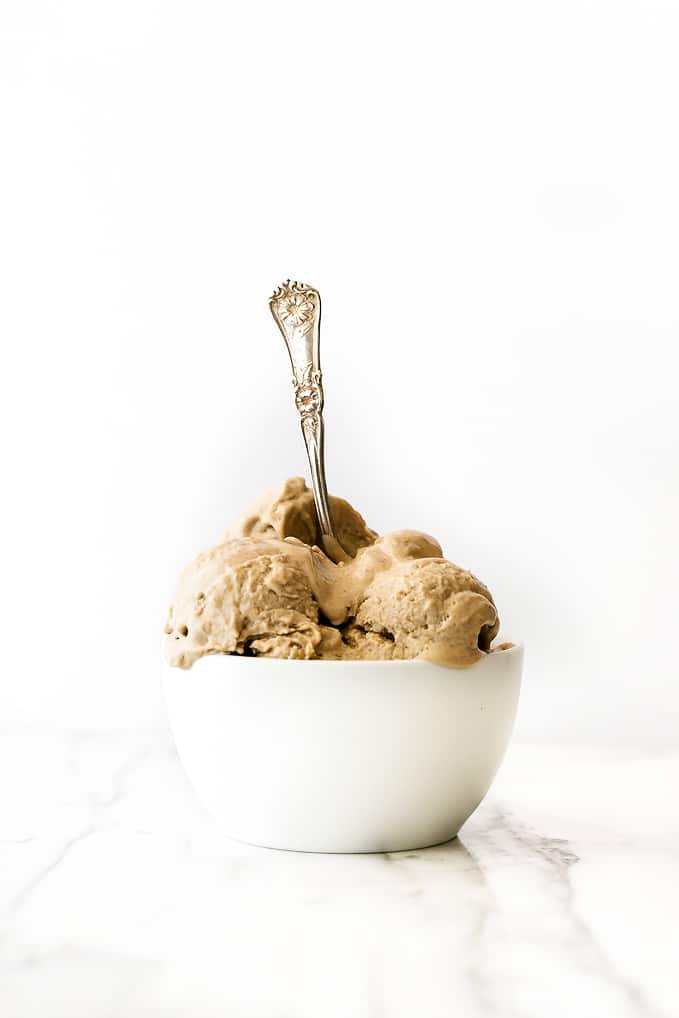 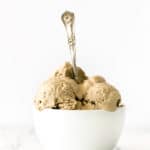 This no-churn vegan peanut butter ice cream requires, no joke, just 6 ingredients, and that's including sea salt. Better yet, you'll only need to spend 10 minutes in the kitchen to make it. It's ultra creamy, easy to scoop, nutty, sweet, and just the right amount of savory. It's delicious all on its own but to up the decadence, top it with chopped dark chocolate, cacao nibs, or fresh berries // berry compote for a dessert rendition of PB + J.
Course Dessert, Ice Cream
Cuisine Gluten-Free, Grain-Free, plant-based, Vegan
Prep Time 8 hours 10 minutes
Total Time 8 hours 10 minutes
Servings 8 –10
Author Ashley

*Make your own cashew butter by blending 3 cups raw cashews in a food processor for 6 minutes or until smooth (it should be very thick), stopping to scrape down the sides as needed. If the cashew butter is chunky and clumping as it moves around the food processor, add 1 to 3 tablespoons of filtered water to encourage blending and to yield a smooth, creamy cashew butter. Measure off the amount needed for the recipe and store the extra cashew butter the refrigerator in an airtight jar or container.
**This recipe was inspired by the Unconventional Baker's nutty, no-churn ice cream magic!