These vegan vanilla spelt donuts offer a delicious dose of cheery fun to morning dining! Requiring just 30 minutes of time, these baked donuts come together in a flash. Super soft, fluffy, and spring-y vanilla donuts are dipped in glaze and playfully decorated with rainbow sprinkles. 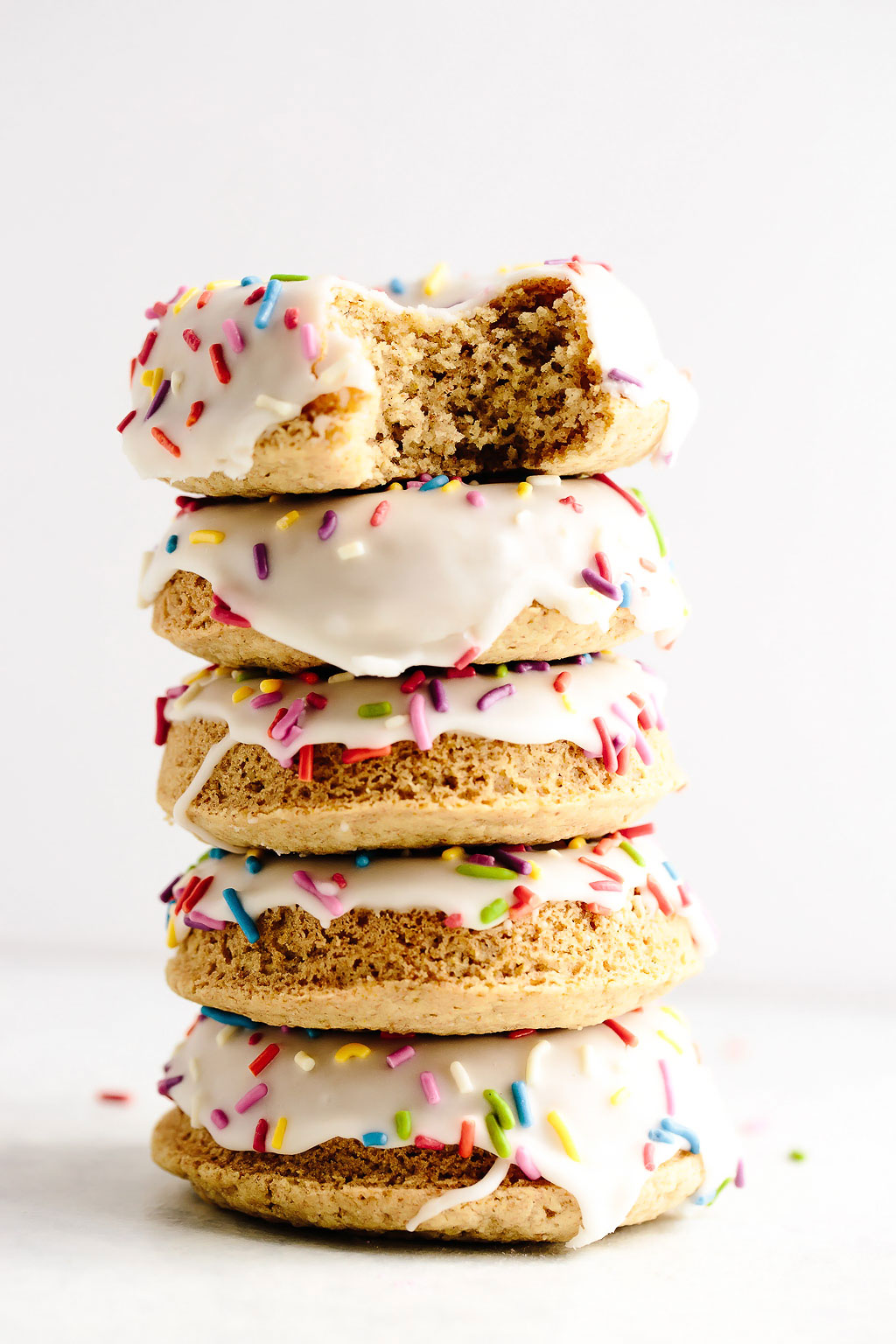 What's your favorite kind of donut?

As a kid, I loved vanilla long johns—those puffy oblong yeast donuts dressed with a smooth coat of vanilla glaze.

Interestingly, as an adult, I'm much more a fan of cake donuts than the yeast-risen types. Perhaps it's because they're sweeter, and if I'm going to have a donut for breakfast, then you better believe I'm going all in.

After all, aren't donuts just a socially acceptable way to consume cake for breakfast?

Sloane has already developed an affinity for anything dressed in rainbow sprinkles. And so, when it comes to donuts, she gravitates towards vanilla cake donuts with icing and sprinkles.

Most of the time she eats around the donut, opting instead to consume every last colorful sprinkle and slather of icing.

Now that we're living in the suburbs, it's not as easy to find vegan treats in coffee shops, so I figured it was about time I tried my hand at a recipe for homemade donuts.

In the spirit of Sloane, these vegan vanilla donuts are outfitted with a thick coating of glaze and plenty of (naturally colored) sprinkles, too. 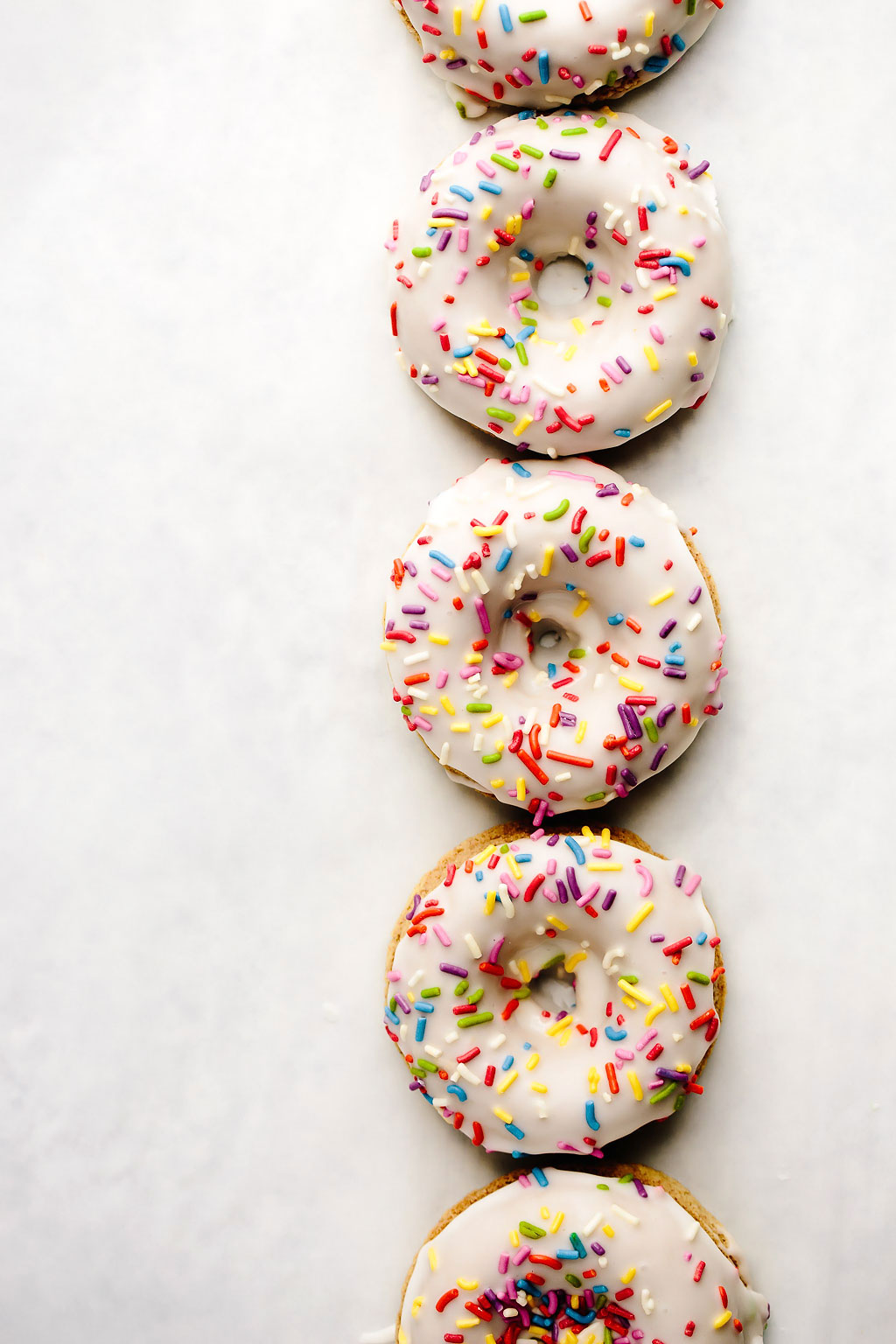 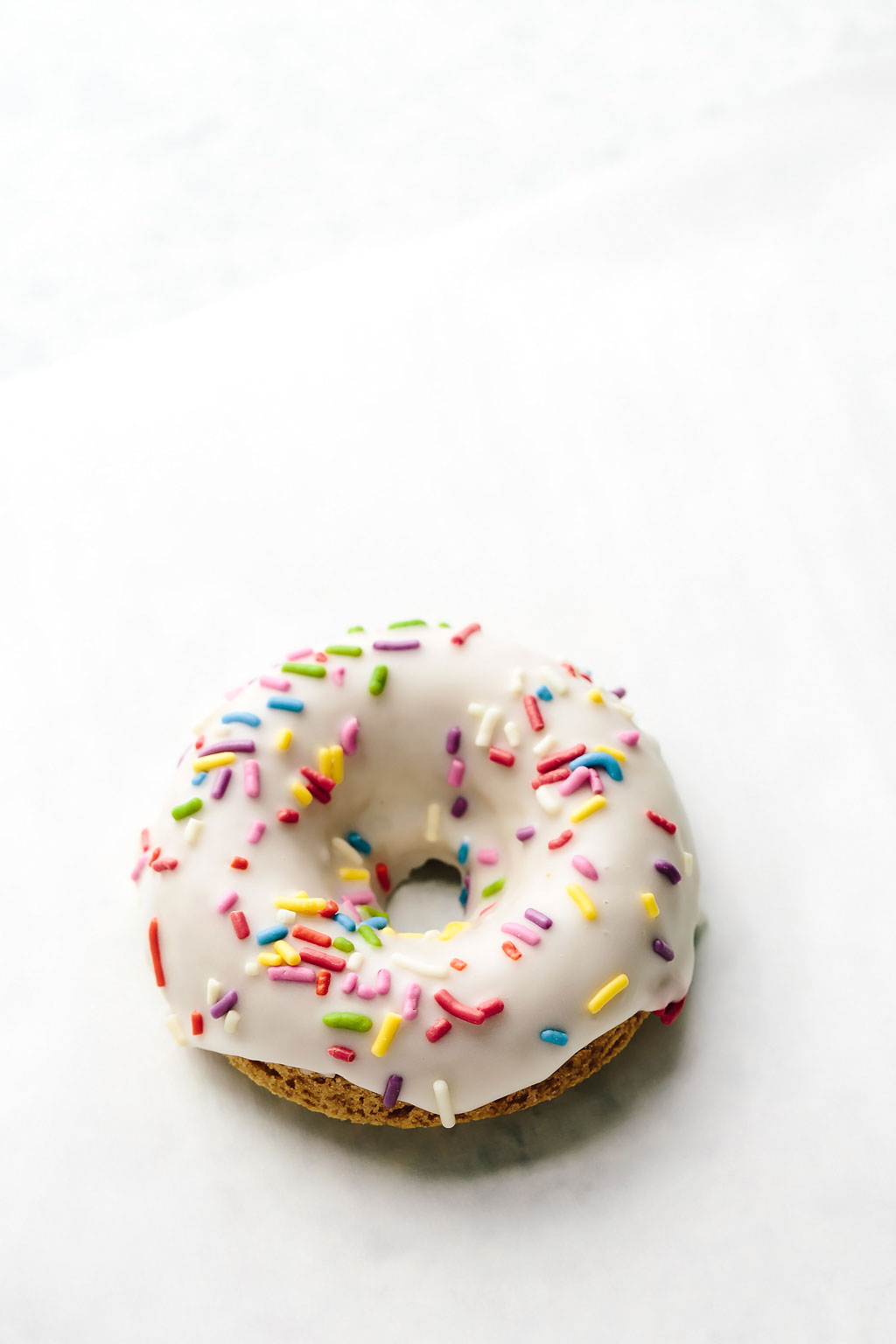 Can I brag here for a hot second?

When I gave Sloane her first of these homemade donuts, I fully expected her to take her usual donut-consumption approach and eat around the actual donut, leaving its sprinkle-less crumbs behind in a pile of discarded donut rubble.

To my surprise and delight, she devoured the entire donut, not just the frosting and sprinkles. Probably because these cake donuts are irresistibly fluffy, vanilla-y, and soft.

As a matter of fact, they're so tasty I even surprised myself. And you know I have high standards for my recipes, so do with that information what you will.

If I were you, I'd take it as a loving nudge to make these donuts as soon as possible.

Not only are they delicious, they're also incredibly easy to make, requiring just 30 minutes and a handful of easy to find ingredients.

And hey, if you're not a fan of "healthier" flours like spelt, then go on and use all-purpose here. No shame in the flour-swapping game!

Honestly, the only remotely "fussy" part of this recipe is the donut pan itself. I didn't have one until just a few years ago. If you don't have a donut pan yet, you can get one (or two) on Amazon. I have this set of two six-donut pans (←affiliate link).

Give the mixture a good stir, ensuring all the flour is incorporated. Then, pipe or spoon the batter evenly into your prepared donut pan/s.

Bake the donuts for about 15 minutes, or until golden. 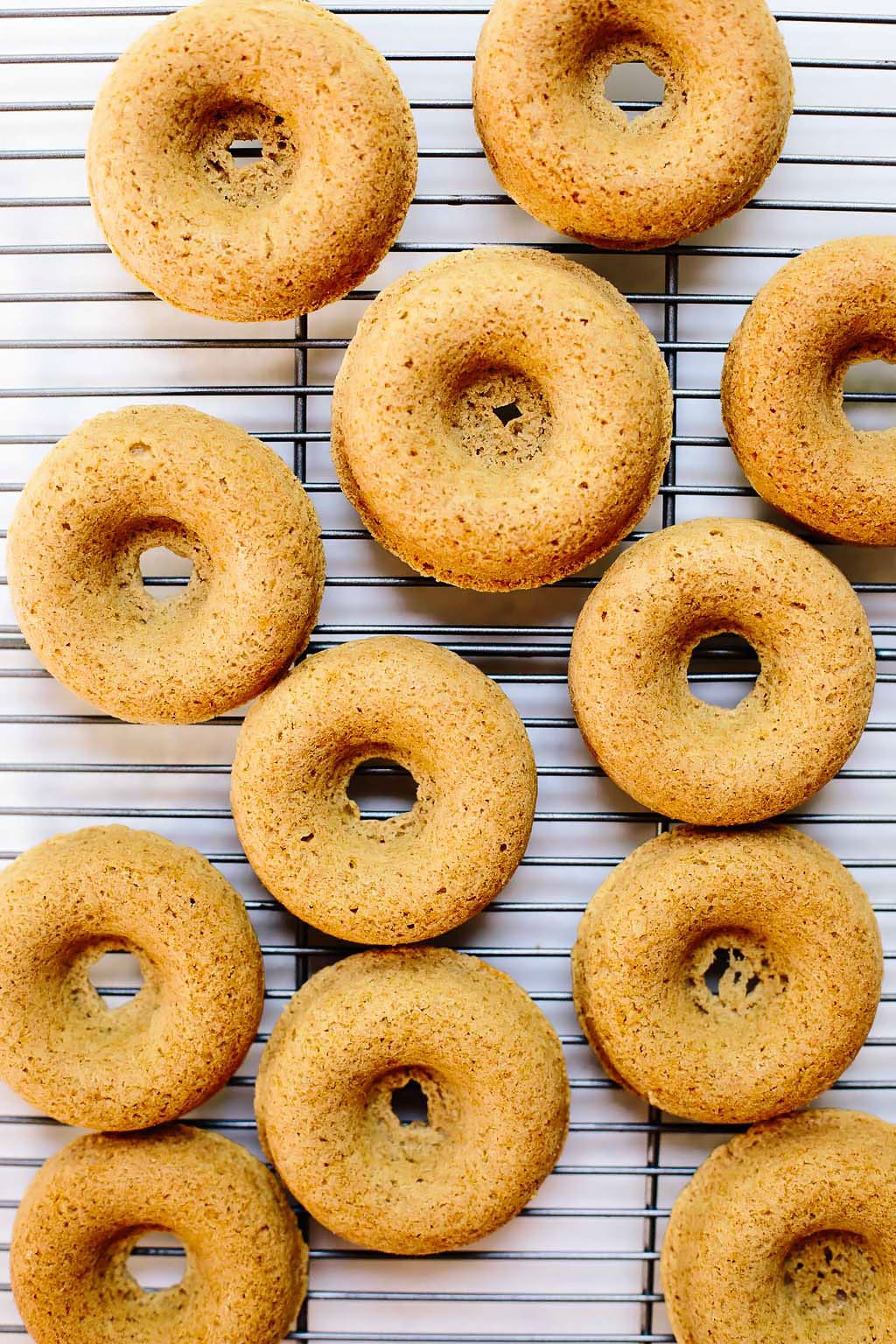 While the donuts cool, prepare the glaze. Whisk together powdered sugar and plant-based milk until your desired glaze consistency is reached.

FYI: This is a super simple glaze that can be easily adapted to any glazing preferences you might have.

For instance, if you prefer a thinner glaze, simply add more milk. If you prefer a thicker glaze (like seen in these photos), add less milk (or more powdered sugar if you realize you added too much liquid to begin with).

Once the donuts are cool, dunk them into the glaze one at a time. Then, generously top with sprinkles. 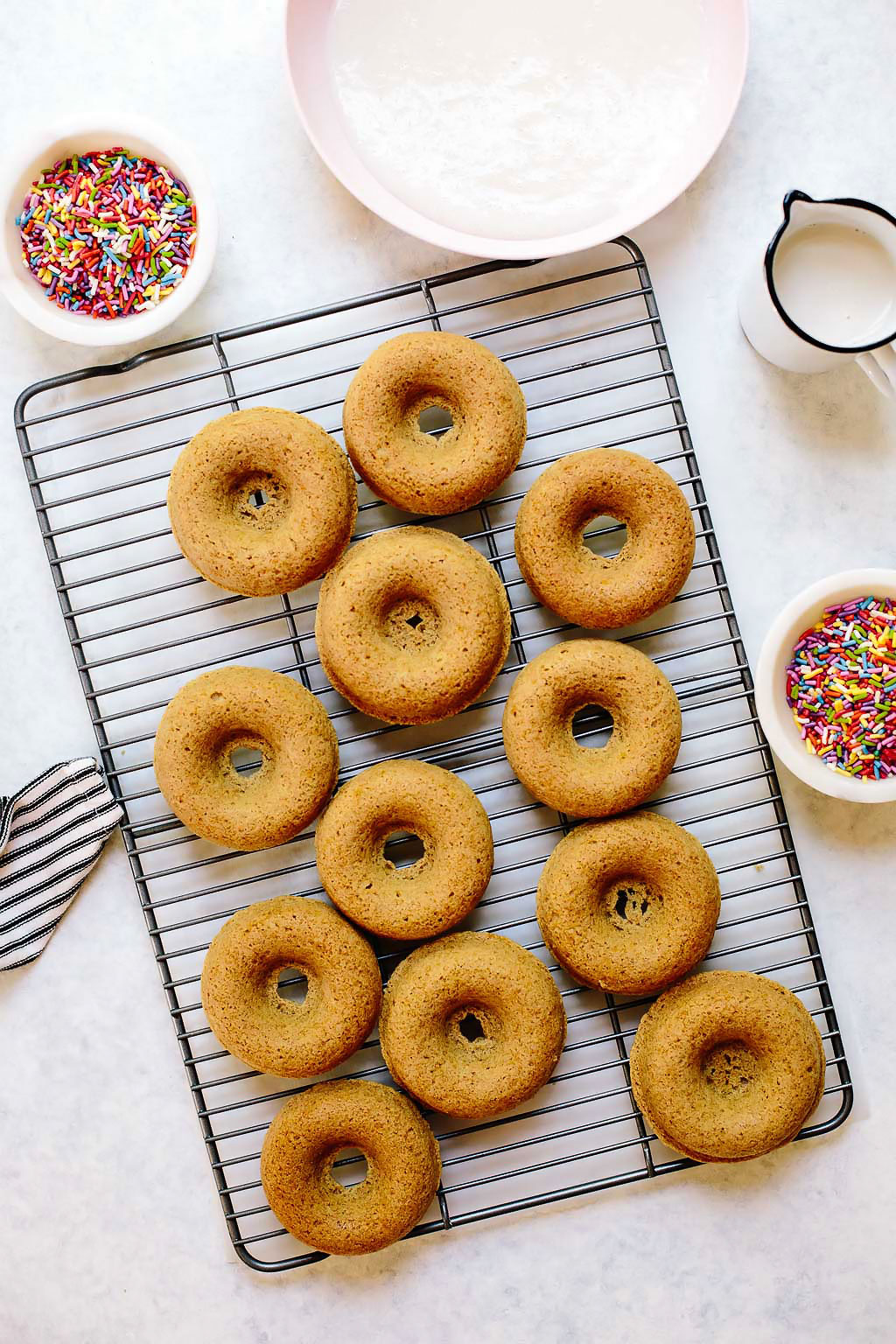 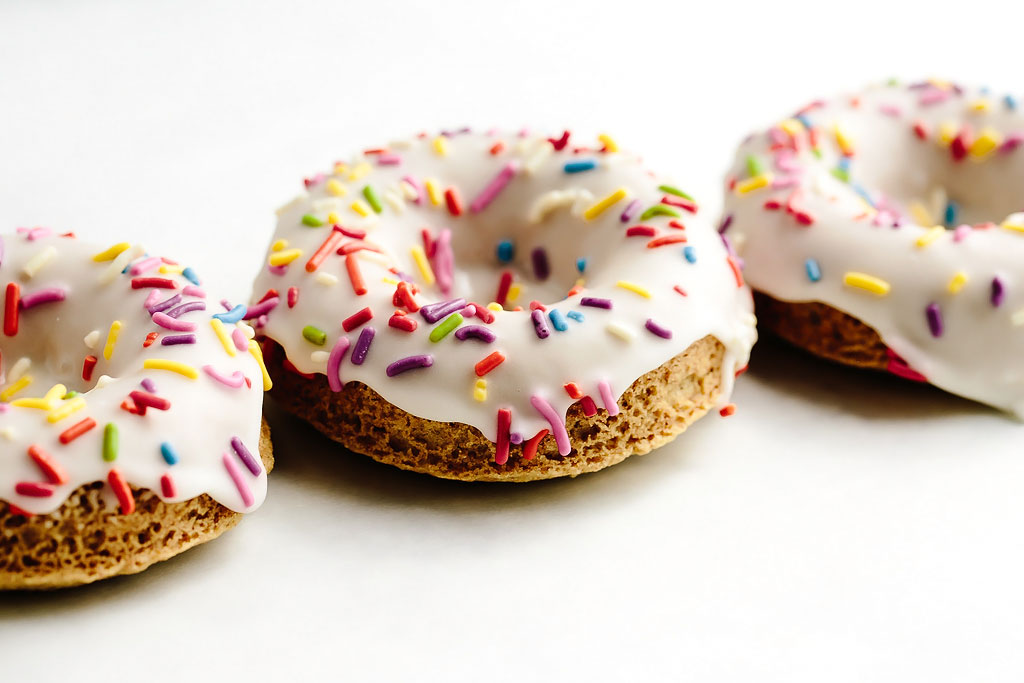 These donuts are best enjoyed within the first day but will keep for up to three days.

You can also freeze them and thaw for future donut enjoyment.

I hope you love these vegan vanilla spelt donuts as much as I do (and as much as Sloane does—girl has literally eaten 7 of the 12 donuts from this photoshoot). 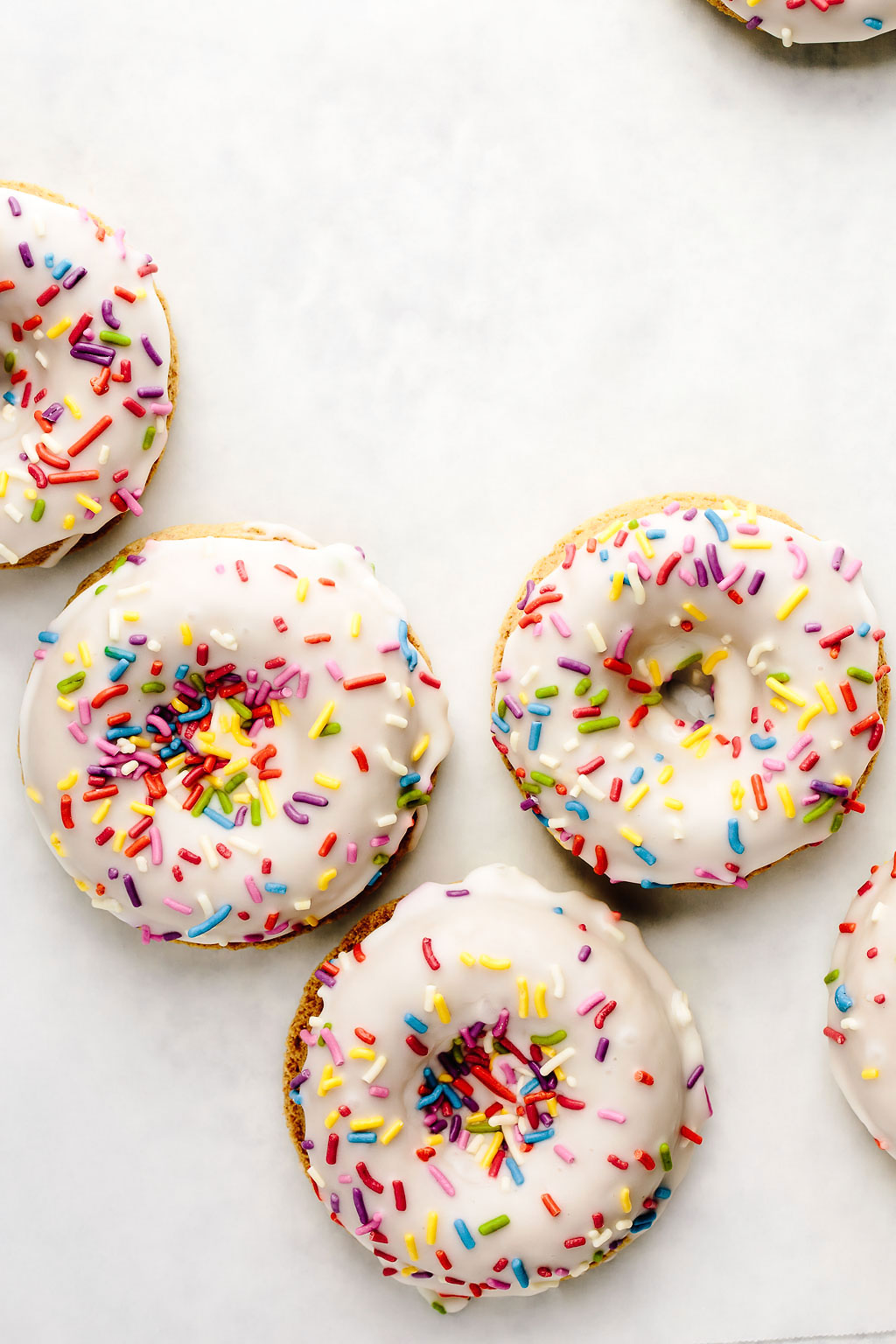 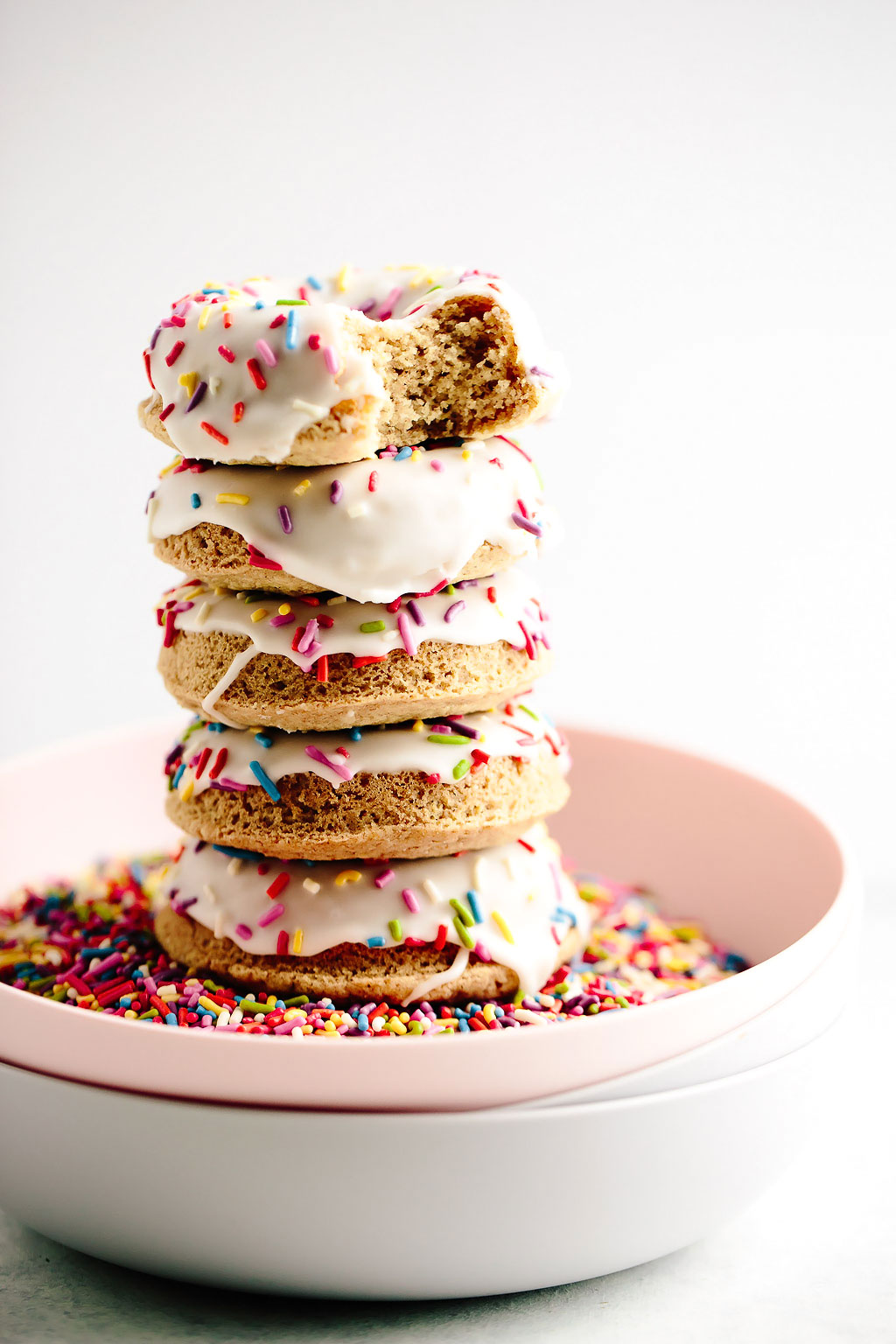 *If you don't have (or like) spelt flour, you can substitute all-purpose flour instead.