You are here Home » Mushroom Paella + Tips for Making Paella

There are few dishes as flavor-packed, comforting, and vibrant as paella. This vegan mushroom paella packs a rich punch of flavor thanks to a sofrito base, hearty mushrooms, and artichoke hearts. It's cooked to perfection with lots of tender rice at the center of the skillet and that delectable golden-brown paella crust at the edges. 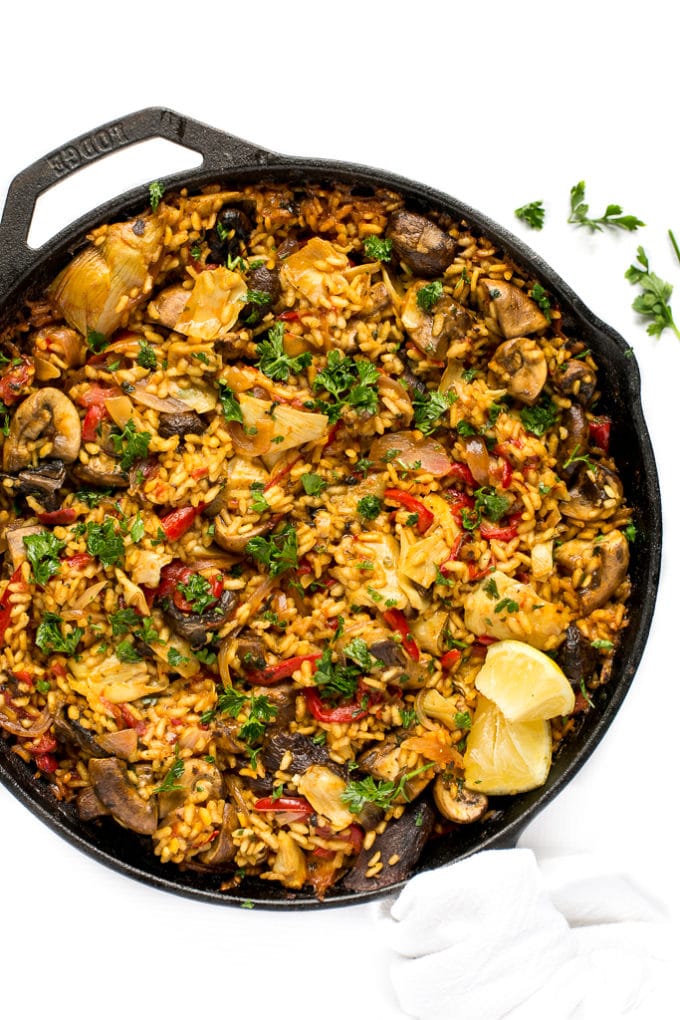 There are few dishes as flavor-packed, comforting, and vibrant as paella. A quick google search for "paella" or even "vegan paella" unveils thousands of recipes, each of which approach the dish with a subtly different technique. That said, there seem to be a few elements that most consider to be fundamental to the dish . . .

1| The type of pan matters. Paella is the Valencian word for "pan", which makes perfect sense given that this rice-based dish is a one-pan meal. There is such a thing as a "paella pan" but a cast iron skillet works well too.

2| All paellas start with a sofrito (i.e., flavor base) of chopped or julienned veggies cooked in oil.The vegetables caramelize as they cook in the oil, taking on deeper, richer flavors. Thus, the sofrito serves as an important flavor building block in paella. A basic sofrito almost always includes tomatoes and garlic but onions and red bell peppers are sometimes added as well.

3| Unlike stirring-intensive, one-pan rice dishes (e.g., Risotto), for paella, once you add the rice and broth to the pan, you stir it once and leave it alone. Risotto = stir it like it's hot; Paella = forget it exists.

4| Speaking of rice, short-grain, highly-absorbent rice is vital to achieving the right texture, look, and feel. If you use a longer, less absorbent type of rice, you run the risk of creating a mushy, gummy paella. No one wants that. Bomba is often the go-to paella rice in Spain; however, Arborio rice works well too.

5| The Socarrat. Considered by many to be the most delectable portion of paella, socarrat is the crunchy, golden-brown rice crust that forms along the bottom and sides of the pan as the rice cooks. Depending on the type of pan and the heat used, the socarrat either naturally develops throughout cooking (another reason not to stir) or the heat is turned up for the last 60 seconds of cooking to gently caramelize and toast the rice on the bottom of the pan.

6| Saffron. The thread-like spice flavors the dish and infuses it with that beloved golden hue. It's all too appropriate that saffron is considered to be the "gold standard" paella spice given its steep price tag. I was grateful to find a teaspoon of saffron for $2.99 at a small neighborhood grocer, so I did use it for this recipe. However, feel free to omit or substitute with a pinch of ground turmeric. 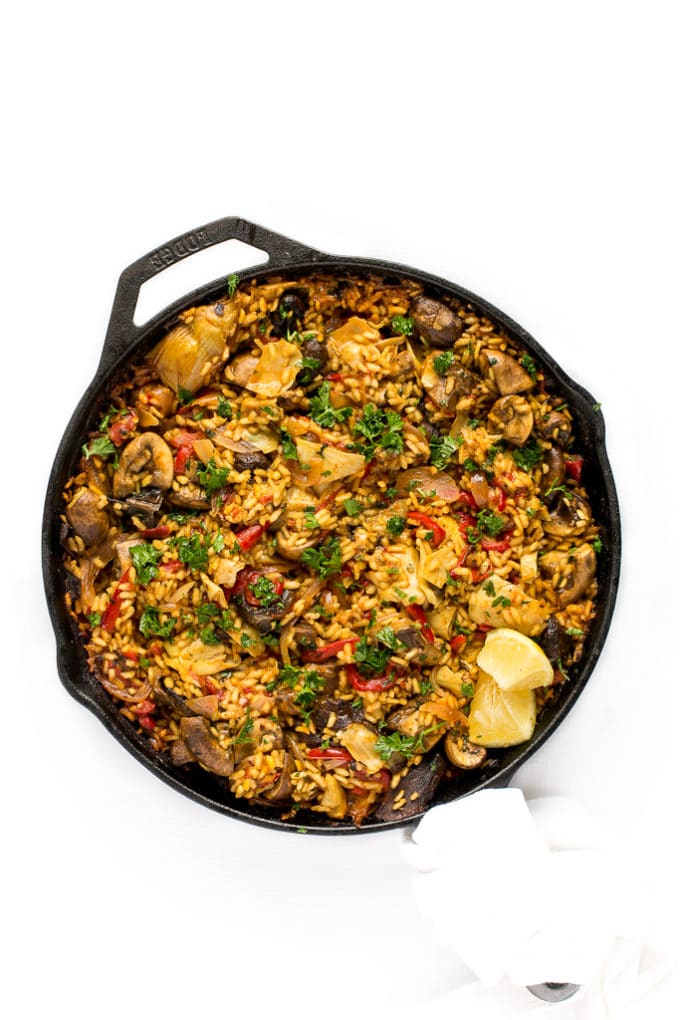 I had mushroom paella on my to-make list for nearly a year, but always felt intimated by the dish. However, after a prolonged period of dilly-dallying, a surge of determination washed over me late last week, and I decided that this would be the week I'd finally tackle it.

Now that I'm on the flipside of my paella woes, I've realized that there's nothing to fear (except maybe the sudden urge to devour an entire skillet full of the stuff). 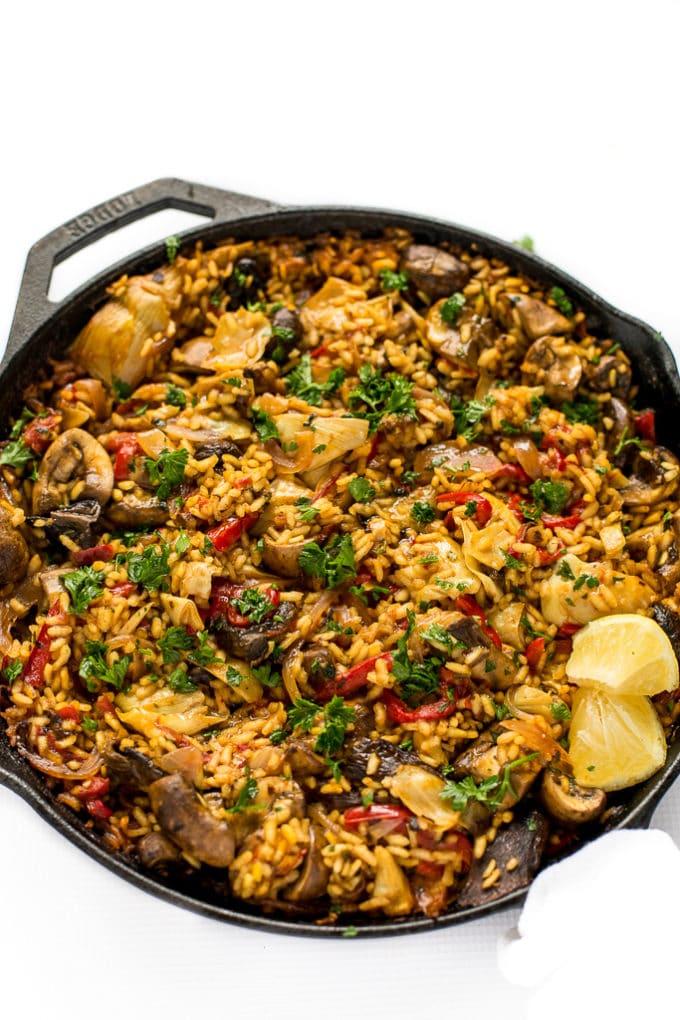 To make this vegan mushroom paella, you'll start by dry cooking the mushrooms. I used a combination of baby bella (i.e., cremini), button, and porcini mushrooms, but feel free to mix and match as you please.

Dry cooking intensifies the mushrooms' flavor, ensures a hearty, meaty texture, and seasons the pan to boot. Once the mushrooms are just about done cooking, you'll season them with a bit of olive oil and parsley. Then, scoop them out of the pan and set aside. 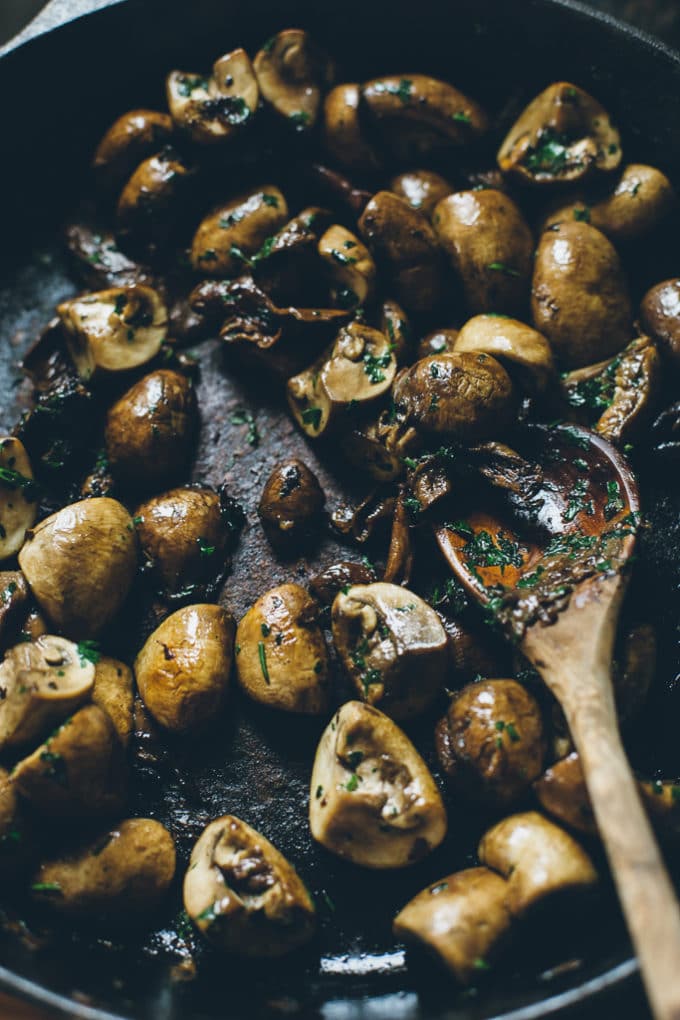 Next, you'll get to work on that flavorful sofrito.

I made the sofrito with a combination of julienned red bell pepper and red onion, diced tomatoes, and lots of garlic to infuse the paella with as much flavor as possible.

Cook those veggies until they're tender and caramelized. 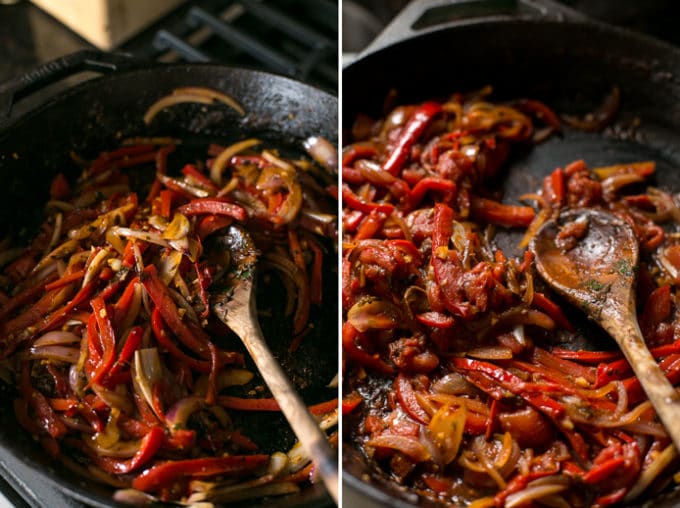 Next, stir in quartered artichoke hearts and cook for just a minute or two more before adding the Arborio rice. Gently stir-fry the rice until it just begins to turn translucent. Then, add plenty of vegetable broth, a small amount of water, and a generous pinch of saffron. Stir once and leave it alone.

The rice will begin to puff up about 10 minutes into cooking. At that point, you'll add the mushrooms back to the pan and gently stir and continue to cook for another 10 minutes, or until the rice is tender. Then, remove the pan from the heat, loosely cover it with foil, and allow the paella to rest for 10 minutes.

And the last step? Uncover that beautiful paella and season it to taste with sea salt, fresh parsley, and a generous spritz of fresh lemon juice. Perfection. 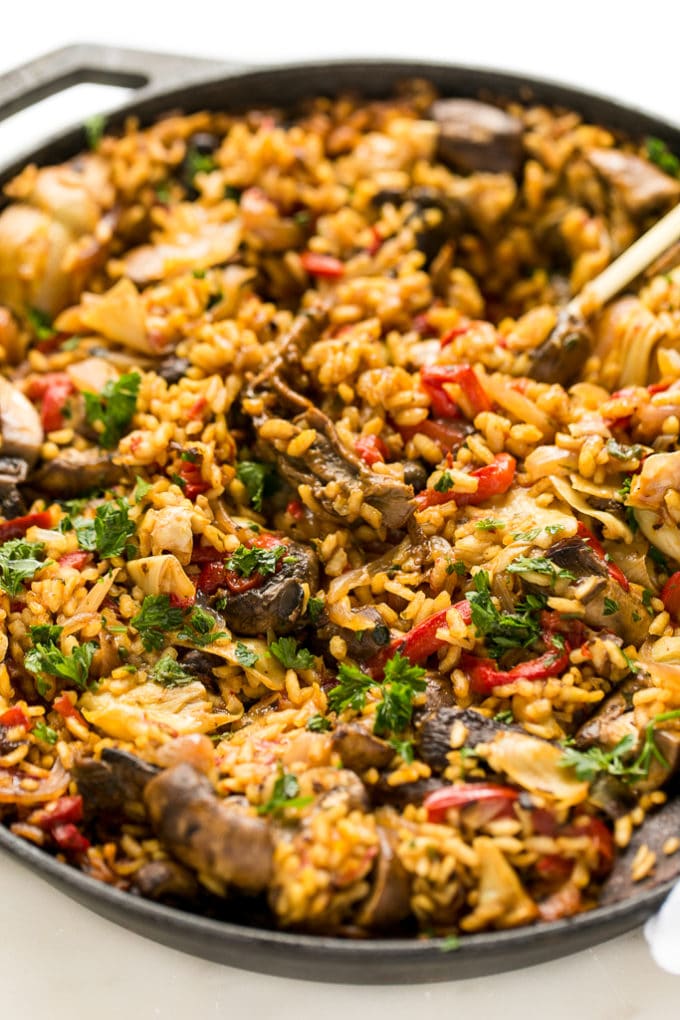 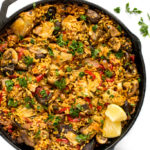 There are few dishes as flavor-packed, comforting, and vibrant as paella. This vegan mushroom paella packs a rich punch of flavor thanks to a sofrito base, hearty mushrooms, and artichoke hearts. It's cooked to perfection with lots of tender rice at the center of the skillet and that delectable golden-brown paella crust at the edges.
Course Bigger Bites, Main Dish, Paella, Rice
Cuisine Gluten-Free, Vegan
Prep Time 15 minutes
Cook Time 55 minutes
Total Time 1 hour 10 minutes
Servings 6 to 8

*Note: It's tempting to stir throughout cooking, but don't do it! You want the rice at the bottom and sides of the pan to develop a crust (this is the best part).