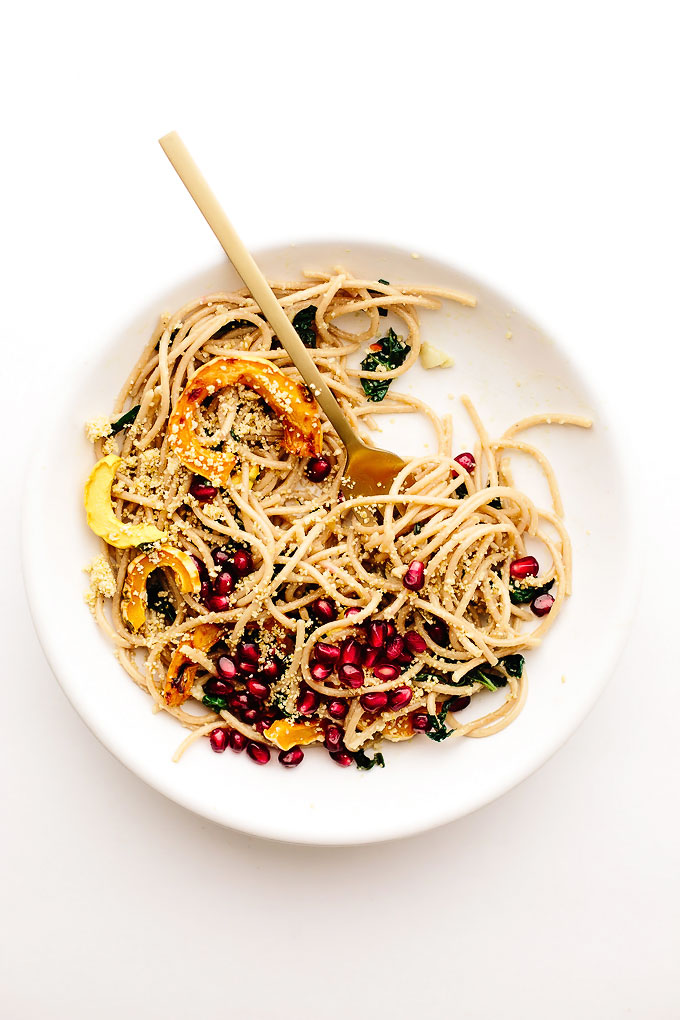 I remember the first time I had spaghetti aglio e olio.

It was about 10 years ago. Dan and I were on a triple date, and we were at a quaint Italian restaurant in the bustling Brady Street neighborhood of Milwaukee.

Typically more of a red sauce gal, I found myself unexpectedly craving something garlicky and cheesy that evening and decided to give the Spaghetti Aglio e Olio a try.

Upon first bite, I was surprised by the zippy kick of heat the pasta led with but was quickly taken by how seamlessly it melded with the saltiness of the parmesan and zestiness of the sautéed garlic.

It didn't take more than a few bites to have me hooked, and I craved that pasta for months after having it.

During my vegetarian days, I'd often make versions of the pasta at home for Dan and I on date night, but I'd yet to try my hand at a vegan version until more recently.

In November (during the last few weeks of pregnancy), I found myself craving garlic, salt, and pasta. The feverish garlic cravings were an interesting turn of events considering the fact that garlic was at the top of my aversions list early on in pregnancy. But who am I to judge?

The first aglio e olio recipe I wrote and tested was a straightforward and totally classic veganized version of the dish. I sautéed heaps of sliced garlic and a pinch of chili flakes in a generous pour of olive oil and tossed it all with warm spaghetti, a bit of minced parsley, and plenty of vegan parmesan cheese. It was perfect.

But I'm sure there are plenty of vegan aglio e olio recipes out there (or maybe there aren't?), and I had visions of transforming the typically beige dish into something colorful and vibrant.

And so, somewhere along the way, this vegan spaghetti aglio e olio with delicata squash, kale + pomegranate came to be... 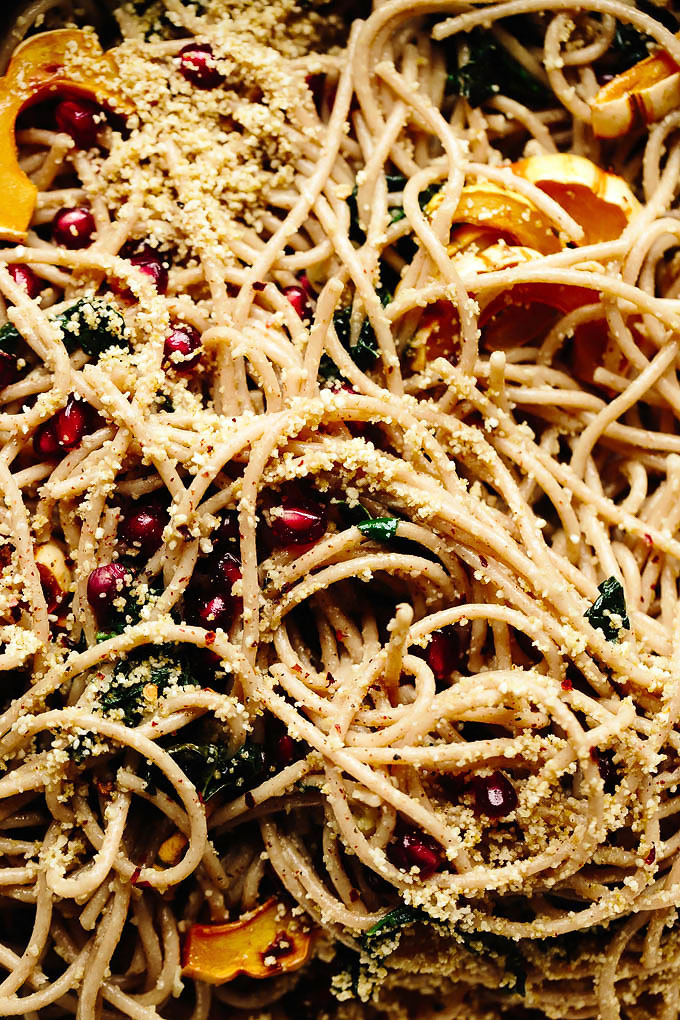 The saltiness of the vegan parmesan and savory garlicky kick complement the soft sweetness of the delicata squash and the juicy brightness of the pomegranate seeds. And because there are so many people who don't particularly enjoy the rather grassy flavor of parsley, I decided to swap out the parsley in favor of lacinato kale.

All this being said, you can easily adapt the recipe to a more traditionally aligned take on the dish by omitting the squash and pomegranate seeds and either sticking with the kale or subbing in minced parsley instead. It's delicious like that, too.

And I know because I've tried it. (I ate pasta about 4–5 days a week during those last few weeks of pregnancy—carbo-loading for the big event, I suppose?)

To make this simple vegan pasta, you'll start by roasting up a pan of sliced delicata squash. If you can't find delicata squash, sweet potatoes and butternut squash work great here, too.

I typically dry roast the squash and leave it unseasoned. There's plenty of oil in the pasta itself that once the squash is added, it gets generously coated. However, if you aren't a fan of dry roasting, then feel free to add a drizzle of olive oil and a pinch of sea salt. 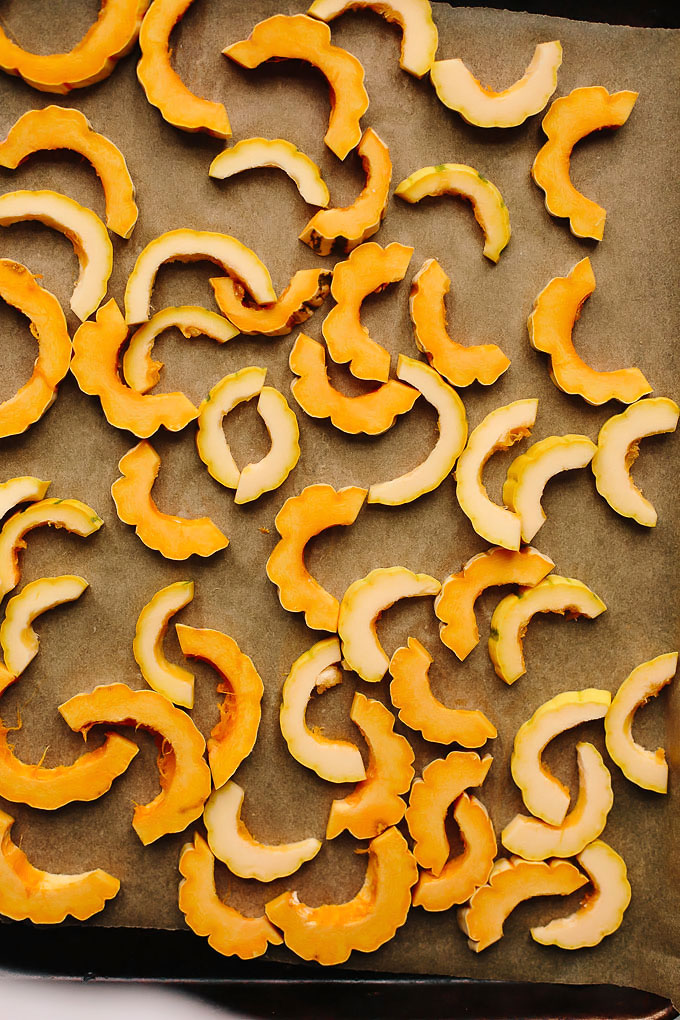 As the squash roasts, you'll get to work on the other elements of the dish.

You'll need about ¾ cup (more or less, to taste) of pomegranate seeds. You can purchase pre-shelled seeds if you'd like, but I much prefer to tackle that step myself to ensure the freshest, juiciest pomegranate seeds.

Next, you'll bring a pot of well-salted water to a boil and cook up your spaghetti of choice. I used whole wheat spaghetti here, because I like the bite it has (plus, it holds up well for photos), but gluten-free spaghetti and other varieties work great, too.

The key is cooking the pasta until it's al dente. And when in doubt, I'd lean towards undercooking it a bit, because you'll be adding it to the pan and gently sautéing it in the sauce later. 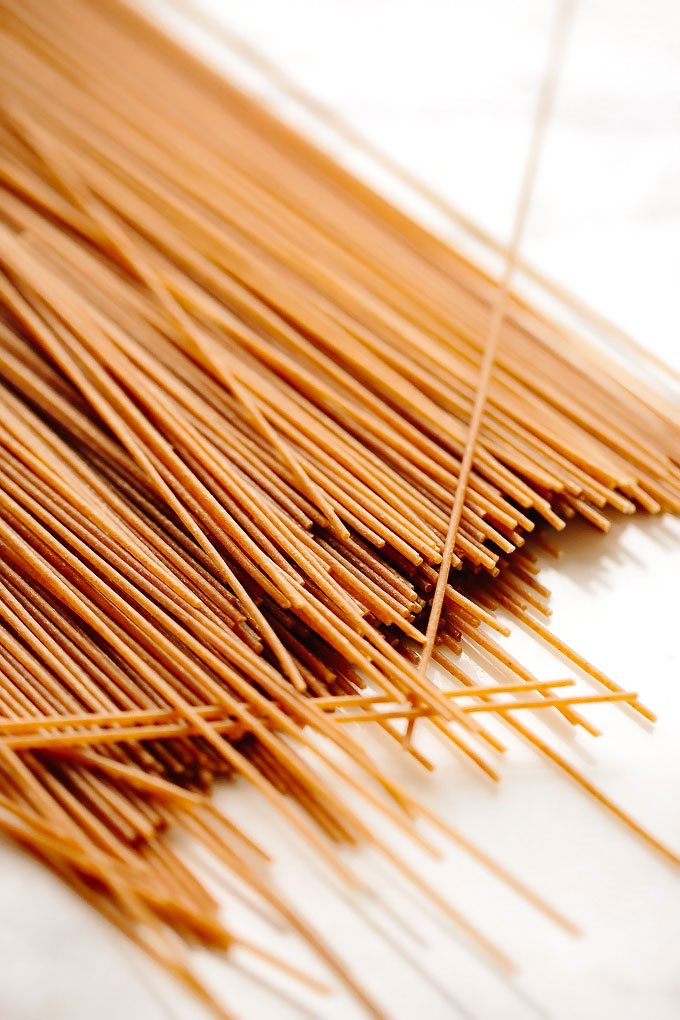 As the pasta cooks, you'll chop up some lacinato kale. 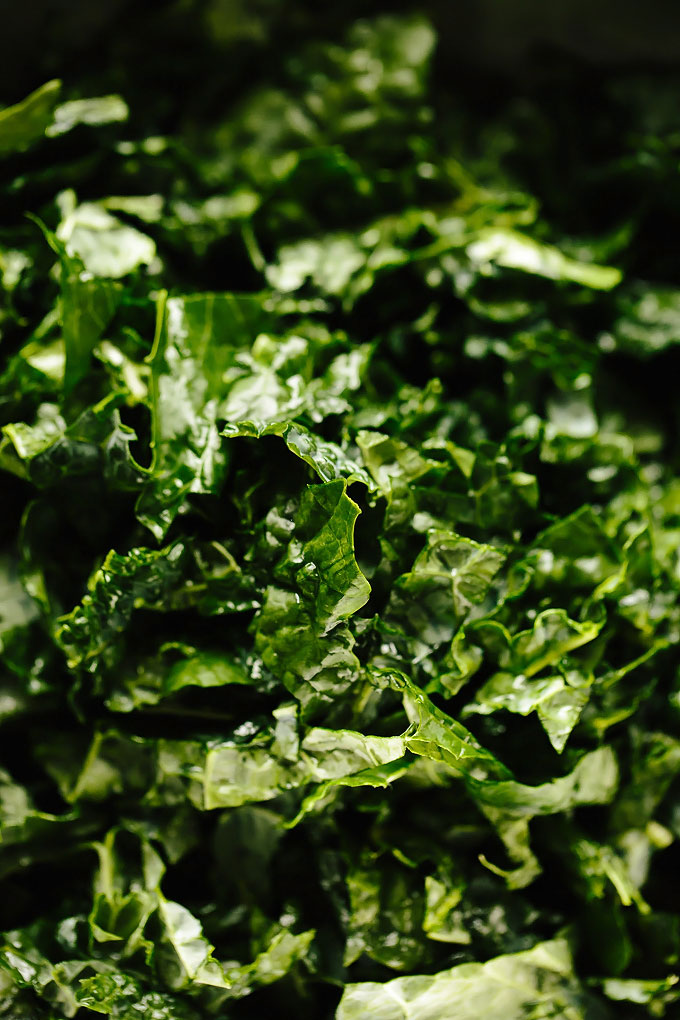 Add the kale, along with about eight cloves of sliced garlic and plenty of olive oil, to a large sauté pan. 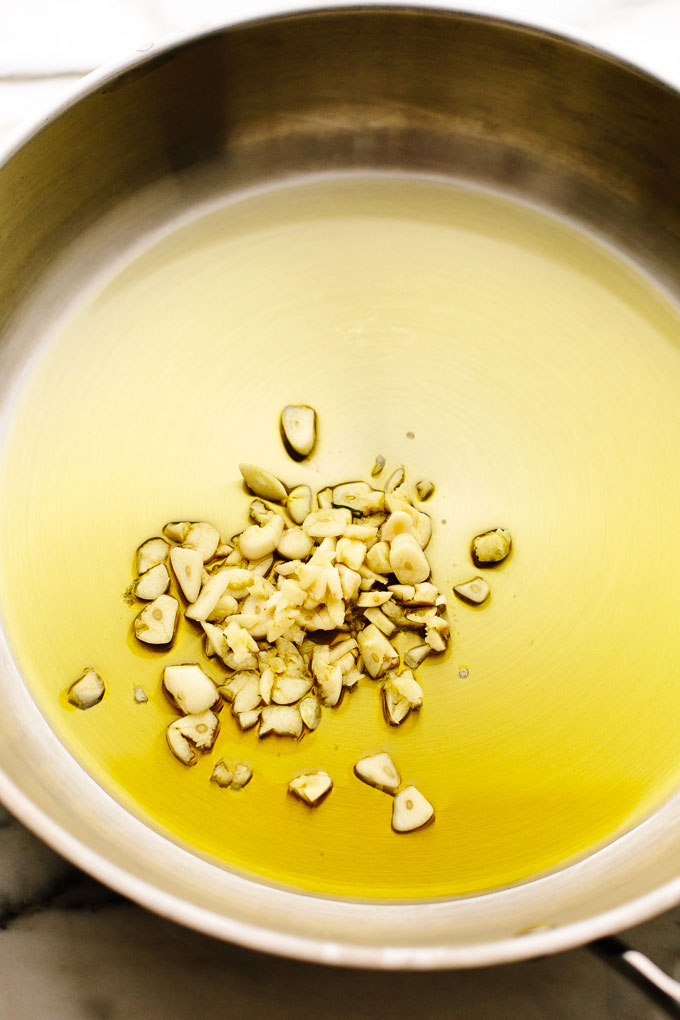 Sauté the garlic and kale in the olive oil for about four minutes, or until the kale softens and wilts and the pungency of the garlic mellows.

Then, add a pinch of red pepper flakes (I use ½ teaspoon for a very mild kick but feel free to adapt to suit your taste preferences) and continue to cook for another minute or so.

Once the spaghetti is ready, add it to the pan along with about one cup of reserved pasta water and plenty of vegan parmesan. I make a double batch of this recipe and use about three-quarters of it, but feel free to use more or less to suit your tastes.

Simmer it all for a minute, or until the sauce clings to the pasta. Then, taste and season with sea salt if desired.

Finally, divide the pasta amongst bowls and top with the delicata squash and pomegranate seeds. 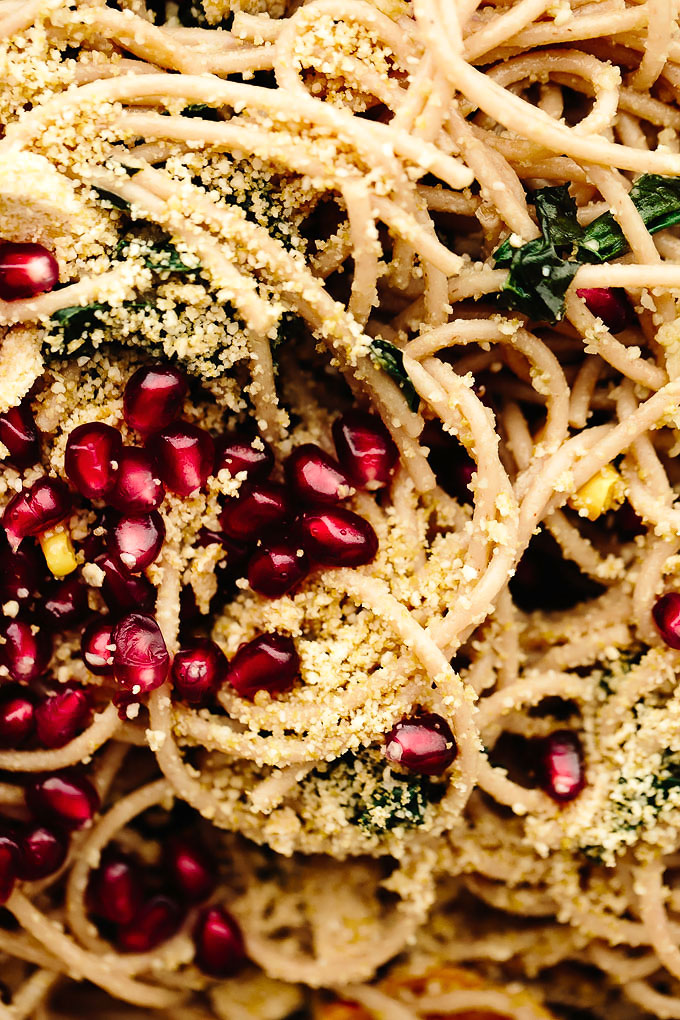 Then, serve and enjoy. 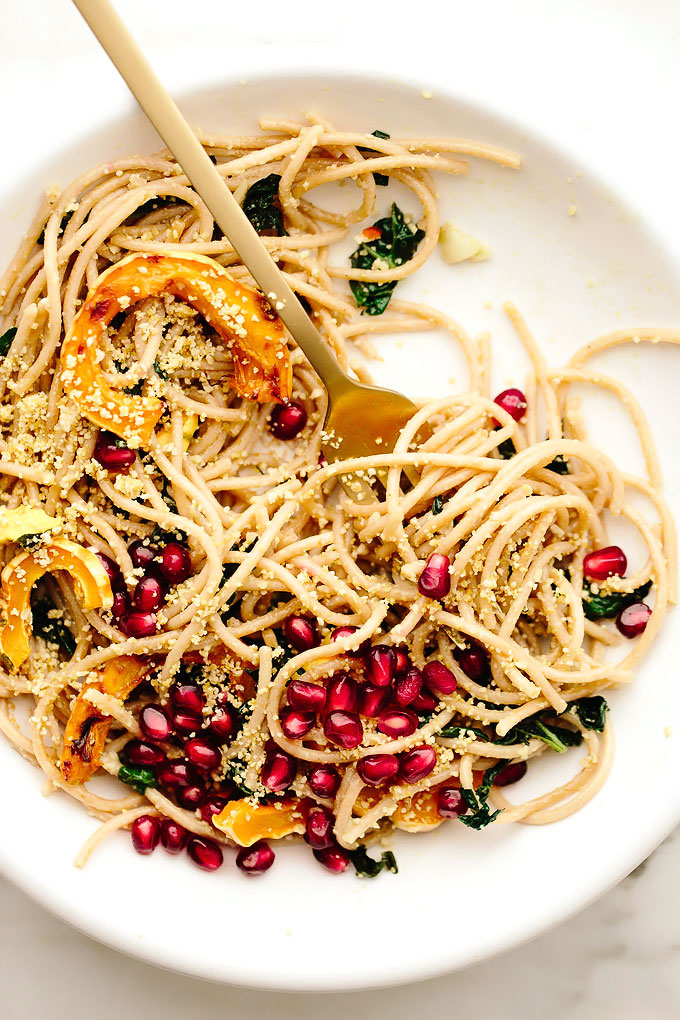 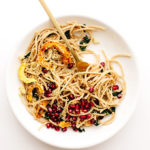