These vegan gf peanut butter chocolate ganache shortbread bars require just 8 ingredients (plus sea salt) and are the perfect festive fall treat. They fall somewhere in between cookie and candy (think: Girl Scout Tagalong meets peanut butter twix bar), and would make an excellent dessert for any upcoming holiday parties you might have on your social calendar. A crisp layer of vegan, gluten-free shortbread is topped with a fudgy peanut butter layer. The finishing touch? A thick layer of chocolate ganache. 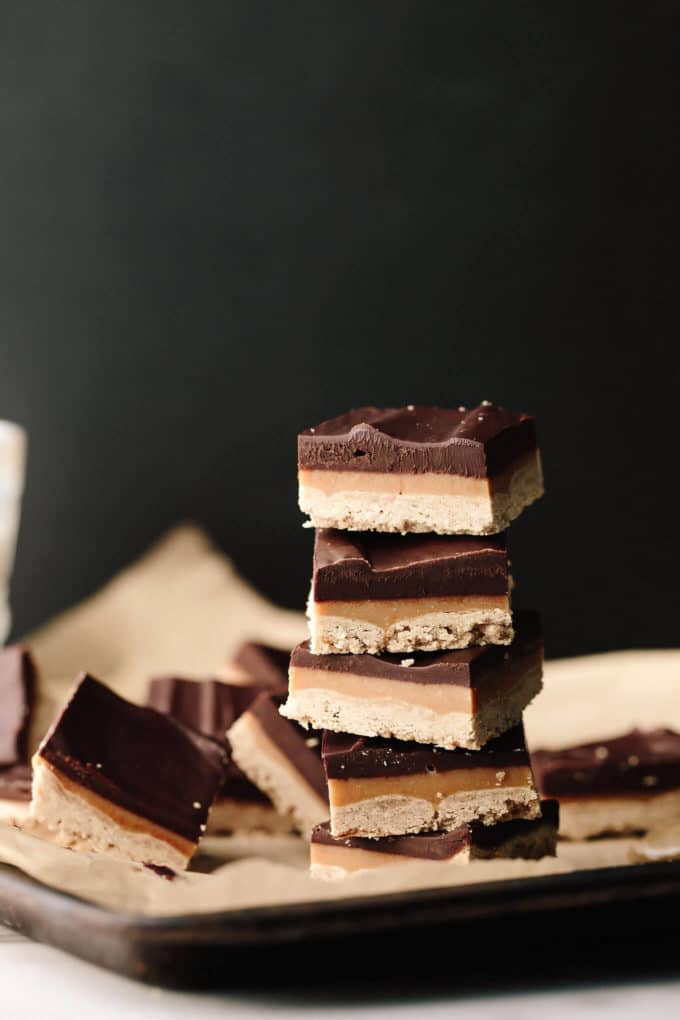 I find it difficult to glance at photos of these bars without trotting off to the kitchen to grab another one or two from the fridge.

It's that chocolate ganache layer—something about the look of it gets me every time. Thick, fudgy, and mousse-like all at once. Be still my pregnant belly.

Although not my intent when creating them, this decadent mashup is nonetheless some sort of chocolate-covered, peanut-butter-coated miracle. I'll take it. 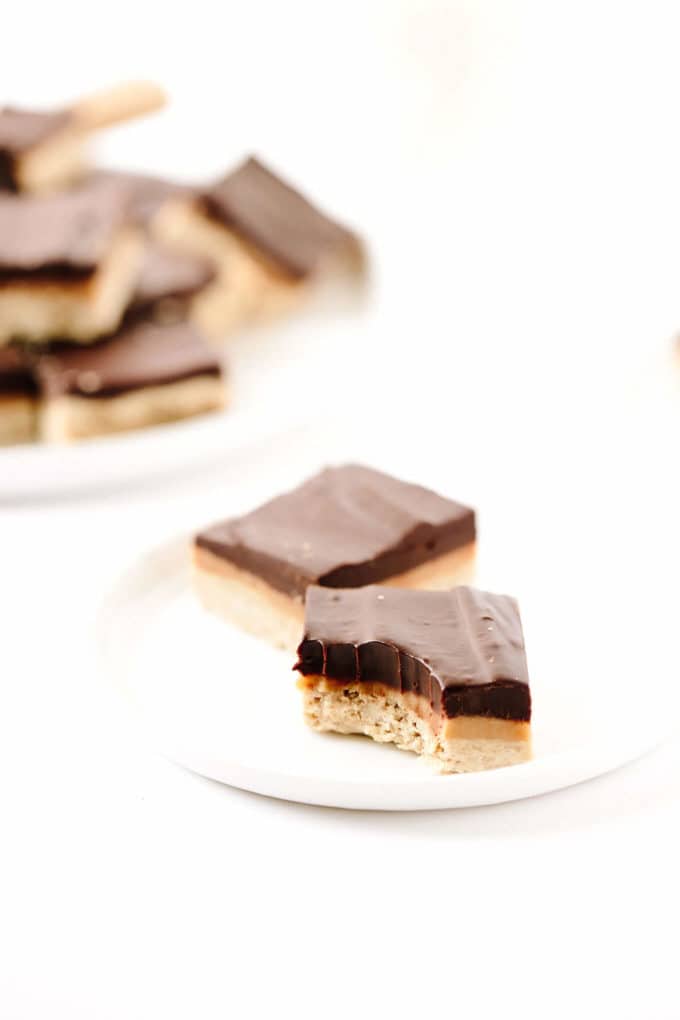 To make these Halloween-appropriate treats, you'll start with the shortbread layer.

The shortbread is a slightly revised version of the base used in these homemade vegan twix bars.

A word of caution:

Please, when making this shortbread, do keep this post about coconut flour in the back of your mind, and refrain from meddling or tinkering with the ratio of flours. Coconut flour works wonders in small amounts (especially in shortbread recipes like this one), but its highly absorbent nature is both a blessing and a curse—too much of it will yield a dry, crumbly shortbread and too little will yield a wet, soggy shortbread. So pretty please, save yourself a kitchen disaster by sticking with the recipe as written—there's a very good reason to use both oat flour and coconut flour here.

While the shortbread layer bakes (just a speedy 12-minute blast in the oven will do the trick), you'll get to work on the peanut butter layer.

To make it, simply whisk together peanut butter, coconut oil, and pure maple syrup in a saucepan over medium heat until smooth and glossy.

Once the shortbread layer has cooled a bit, pour the peanut butter mixture over top and tilt the pan back-and-forth to evenly coat. Then, pop the pan in the freezer to set.

While the peanut butter layer sets, prepare the chocolate ganache.

Simply heat a bit of coconut milk over the stove. Pour the hot milk over one cup of non-dairy chocolate chips. Let the mixture stand for about 5 minutes, or until the chocolate is wonderfully melty. Then, give it all a good stir until you have a thick, glossy chocolate mixture.

Finally, pour the chocolate ganache over the peanut butter layer, and use the back of a spoon to evenly spread it across the surface. Return the pan to the freezer one final time to set. Then, slice into squares and serve, savor, and repeat. 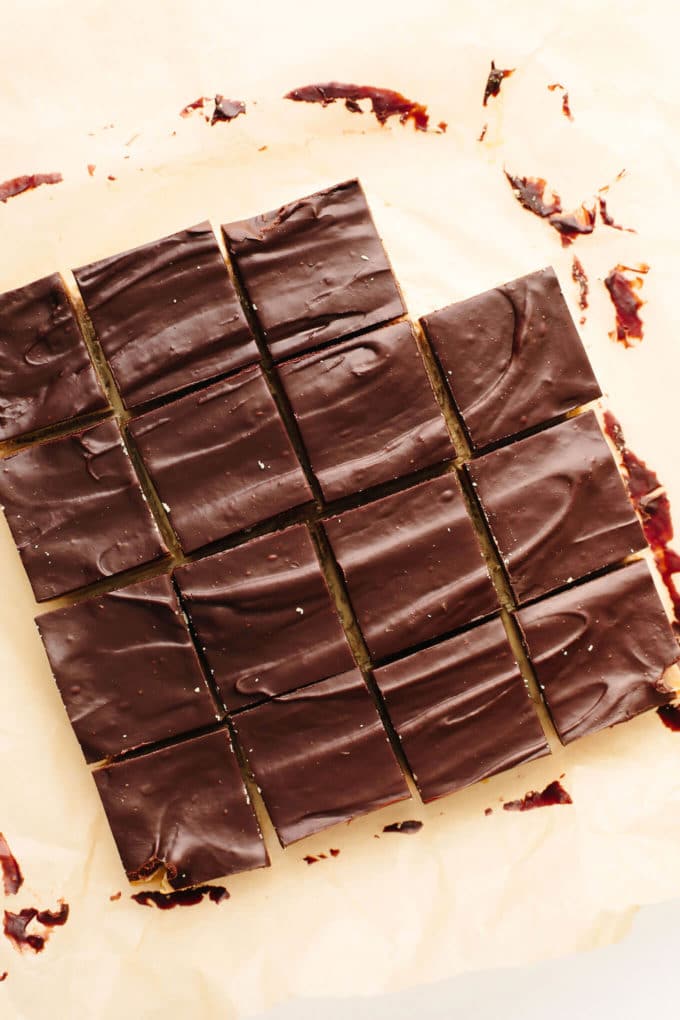 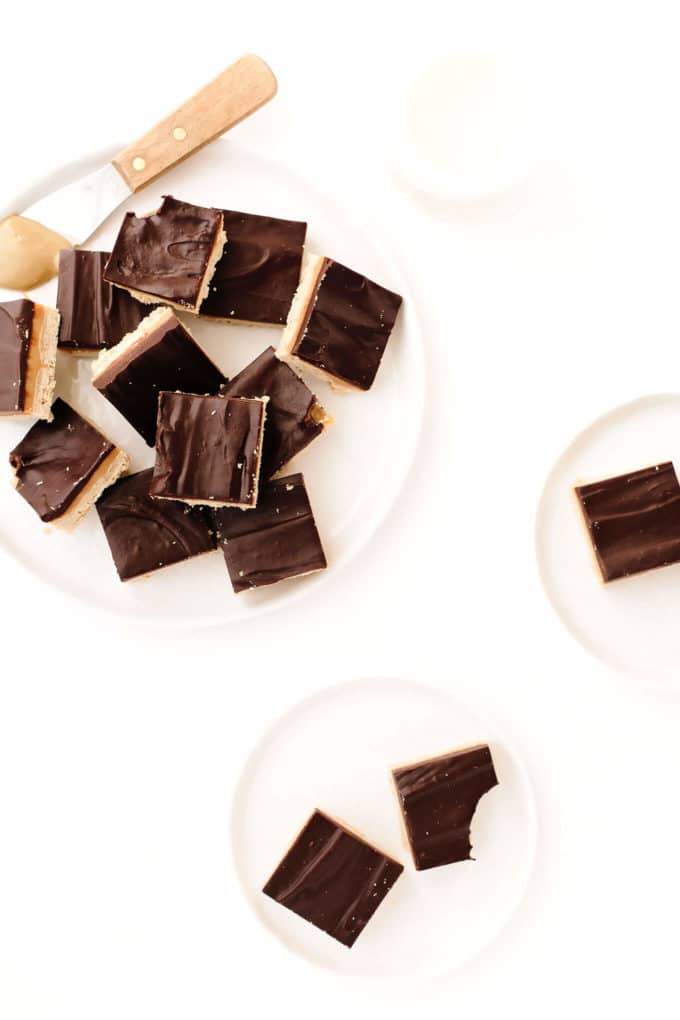 They're richly chocolatey, just peanut buttery enough (although, please, feel free to double the peanut butter layer if you're feeling extra nutty), and grounded by that lovely shortbread layer.

These bars are best when stored in the refrigerator but can also be frozen for up to one month. You know, to satiate your most ferocious chocolate cravings on demand. 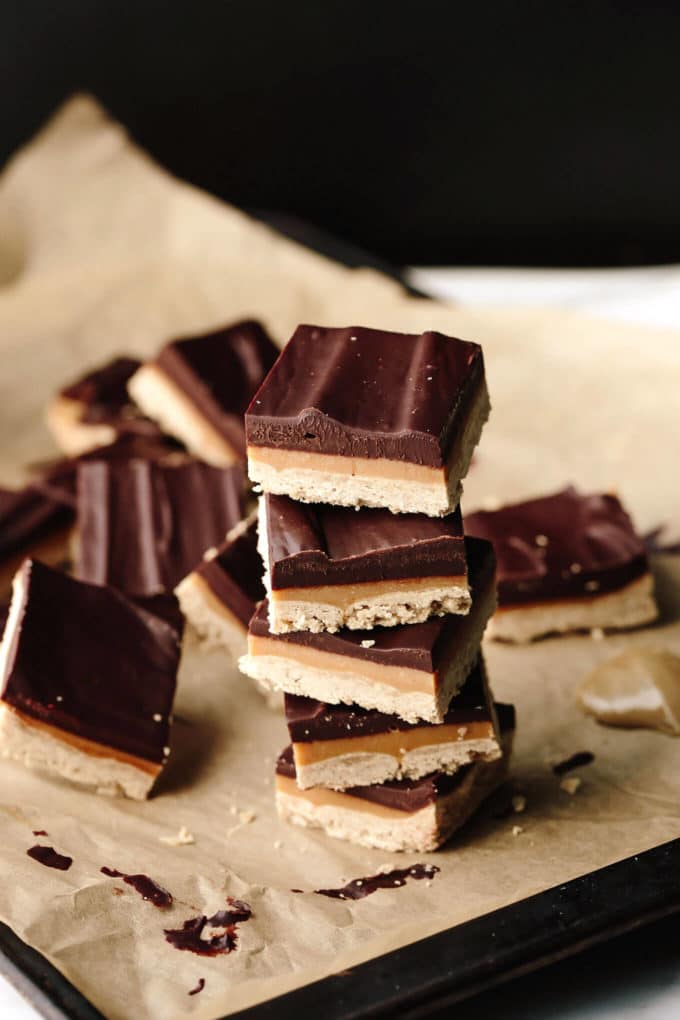 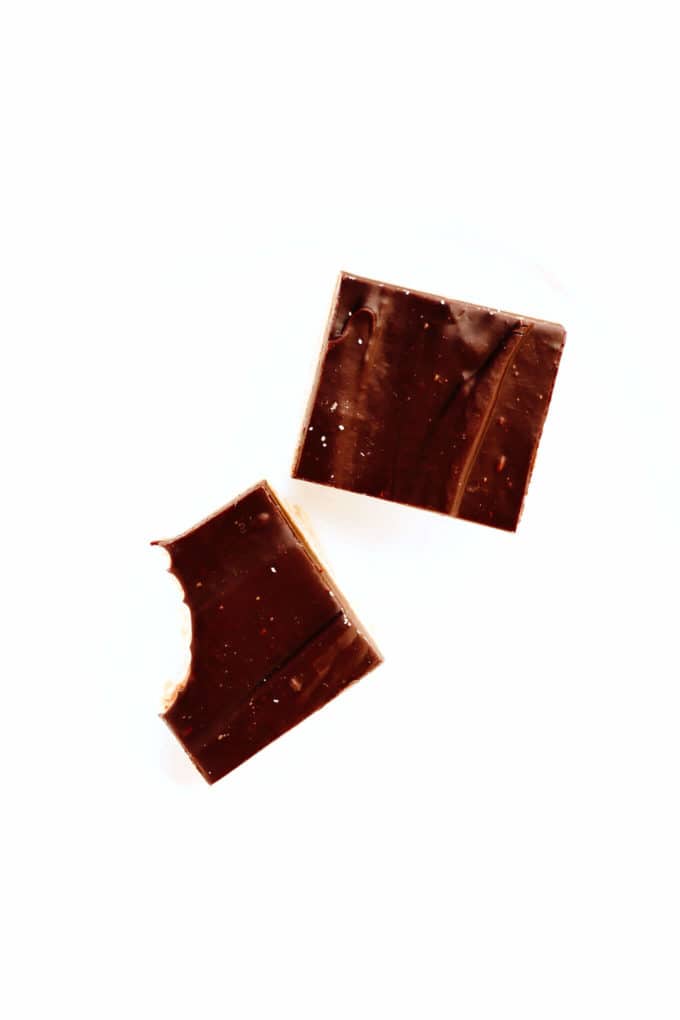 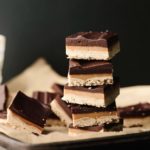 For the Peanut Butter Layer

For the Chocolate Ganache Layer