These vegan cherry chocolate almond biscotti will make you fall in love. Not only are they vegan and gluten-free, they're also completely grain-free and can be made nut-free, too. Allergy friendly nature aside, these biscotti are just downright delicious.

This biscotti recipe is based off the Power Biscotti recipe in my cookbook (←affiliate link). That recipe is still, to date, the one I'm most proud of out of all the recipes I've ever written—book, blog, or otherwise and totaling nearly a thousand at this point.

When the seed-based flour concept proved successful during my recipe trials, it revolutionized the way I thought about baked goods.

It even won the praises of vegan recipe mastermind and fellow blogging friend, Angela Liddon. For those of you who don't own my cookbook, you can snag the original Power Biscotti recipe at the end of Angela's review post.

Angela's description of the original recipe perfectly sums it up:

Upon first bite, I wasn't too sure about the subtle flavor, but as my taste buds adjusted for the reduced sweetness (compared to traditional biscotti), I came to love this healthified version and found myself reaching for it non-stop.

This new, nut-based twist is just as addictive, crunchy, and praise-worthy as the original. Plus, it gets an (optional) chocolate dunk which both ups the sweetness and leaves these biscotti teetering elegantly between the realms of breakfast and dessert. 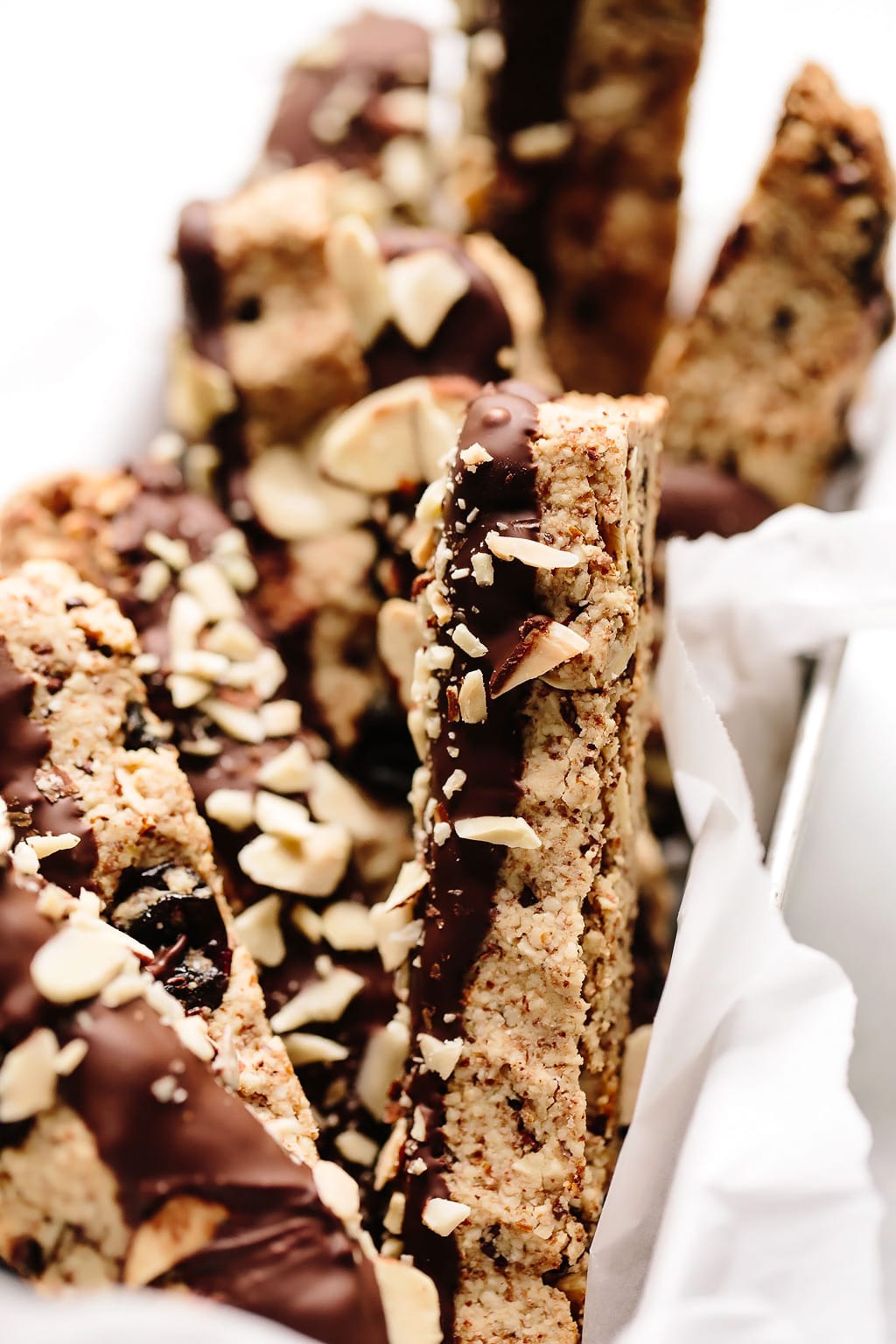 For those of you familiar with Dan's recipe rating system, you know he dishes out the high praises sparingly. And so you'll be thrilled to hear that this recipe earned a perfect 10 from him.

I believe only four or five of my recipes have ever scored a 10.

Dan's also not typically one to seek out sweets. He's much more of a salads and savory kind of guy.

I can rarely count on him to help consume dessert-ish testing leftovers, and so I usually send my mom home with sweets at the end of her weekly Wednesday visits.

But when I went to give these away, Dan quickly intervened, "Oh no! I want those. You can give her some... maybe four, but I want the rest."

Well, alright then. Ladies and gentlemen, we have a winner... 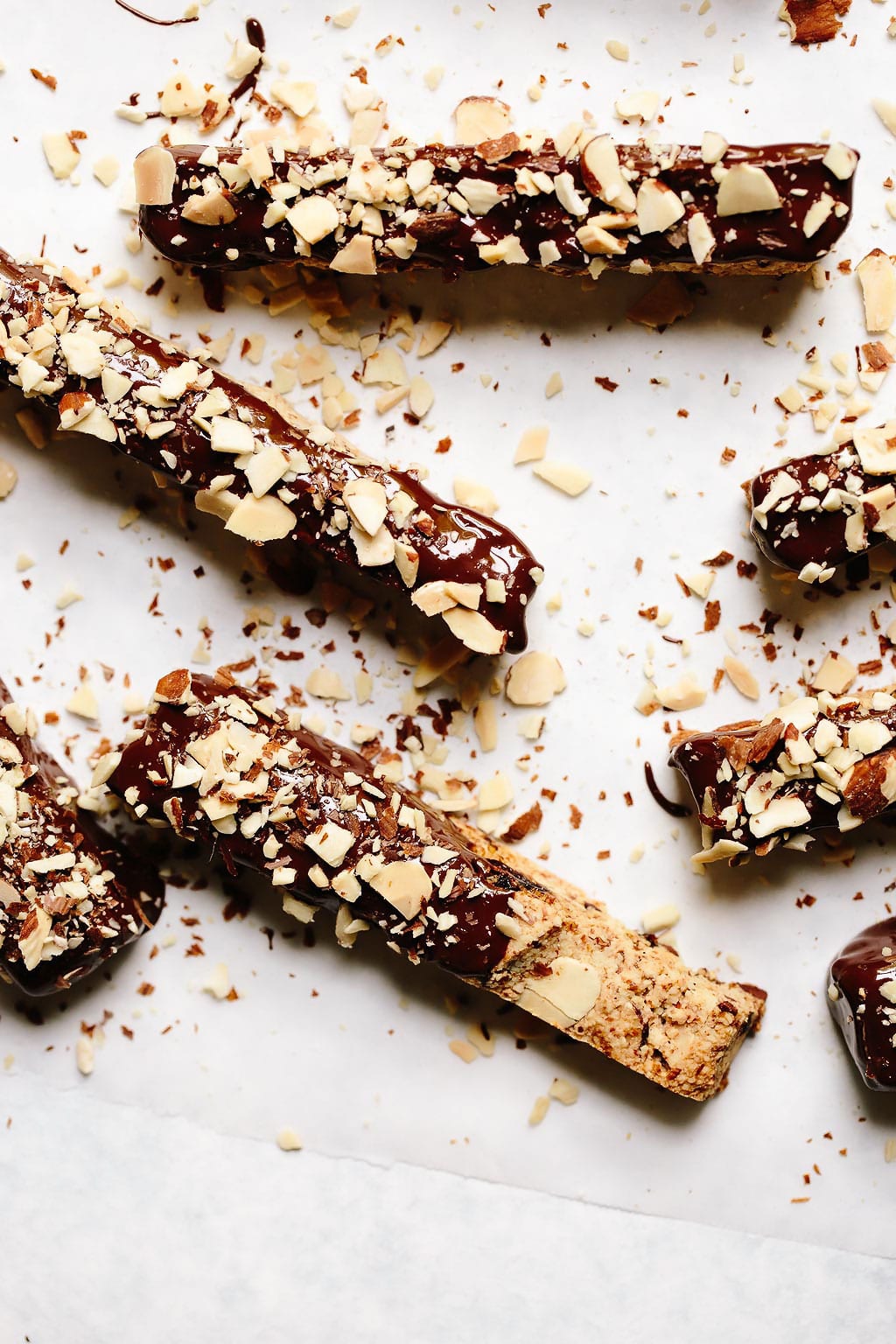 Given that this recipe uses ground nuts as the base and is quite a bit different than traditional biscotti recipes, I've included photos wherever possible (and useful).

If you're one who's easily annoyed by too many photos, I apologize, but step-by-step photos can be especially helpful with alternative baking recipes. Do feel free to hit the "jump to recipe" button at the top of the post—it'll shoot you straight down to the goods.

Ah, yes. The recipe. To make these biscotti, you'll whisk together a bit of ground flaxseed and water to create a flax egg.

Let the mixture stand for 5 to 10 minutes, or until thickened into a "goopy", egg-like consistency. 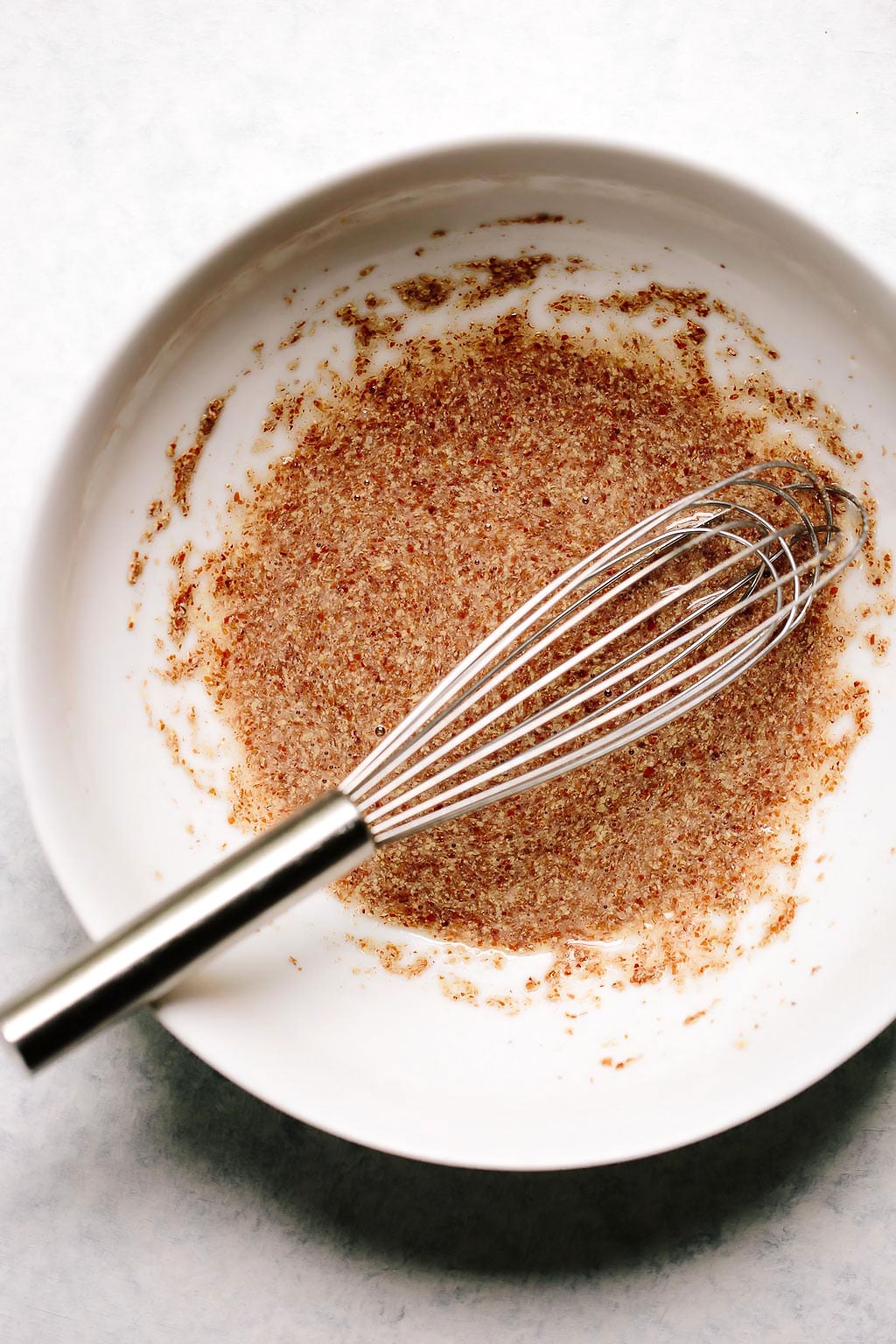 While the flaxseed mixture thickens, grind two cups of raw almonds (or sunflower seeds for nut-free) into a fine meal/coarse flour. A food processor works best for this, but you can use a high-speed blender in a pinch.

Here's a before and after pic for you to reference: 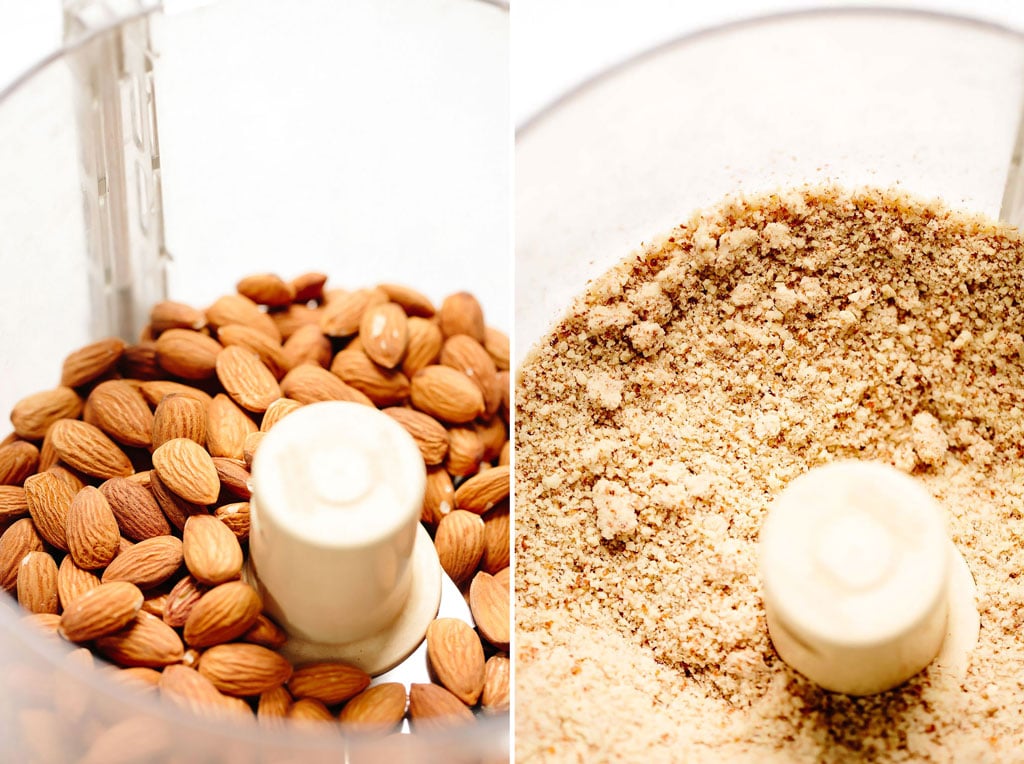 Once the "flour" is made, transfer it to a large mixing bowl and add a bit of arrowroot starch and salt. The arrowroot (along with the flax egg) binds the biscotti together, so be sure to include it. 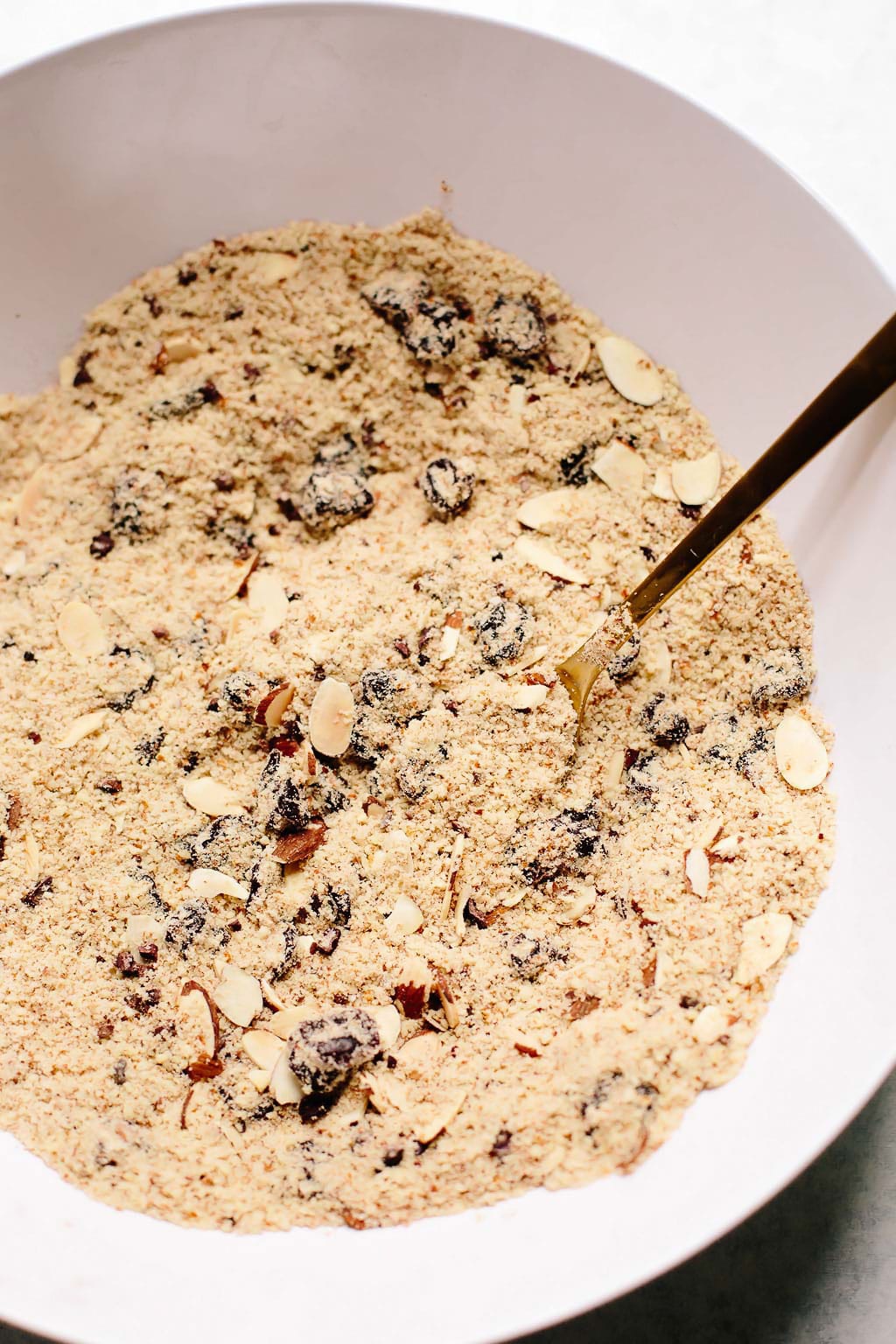 To the flax egg, add a bit of pure maple syrup and vanilla extract, and whisk until combined. 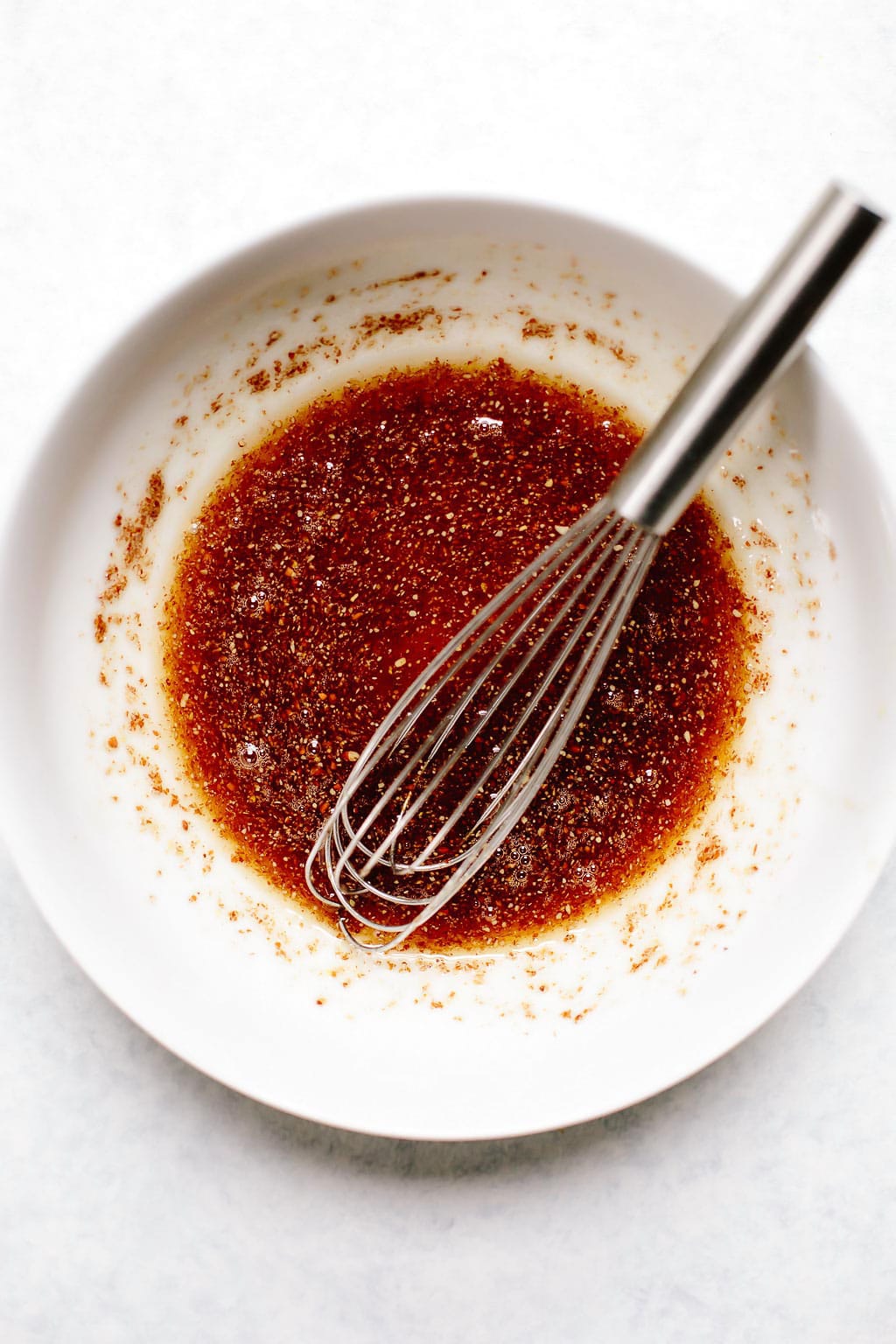 Pour the flax egg mixture over the almond flour mixture and use a spoon to mix until combined.

Initially, it will seem like there isn't enough liquid, but just stir and stir (and even mash a bit) until it's evenly dispersed throughout like so... 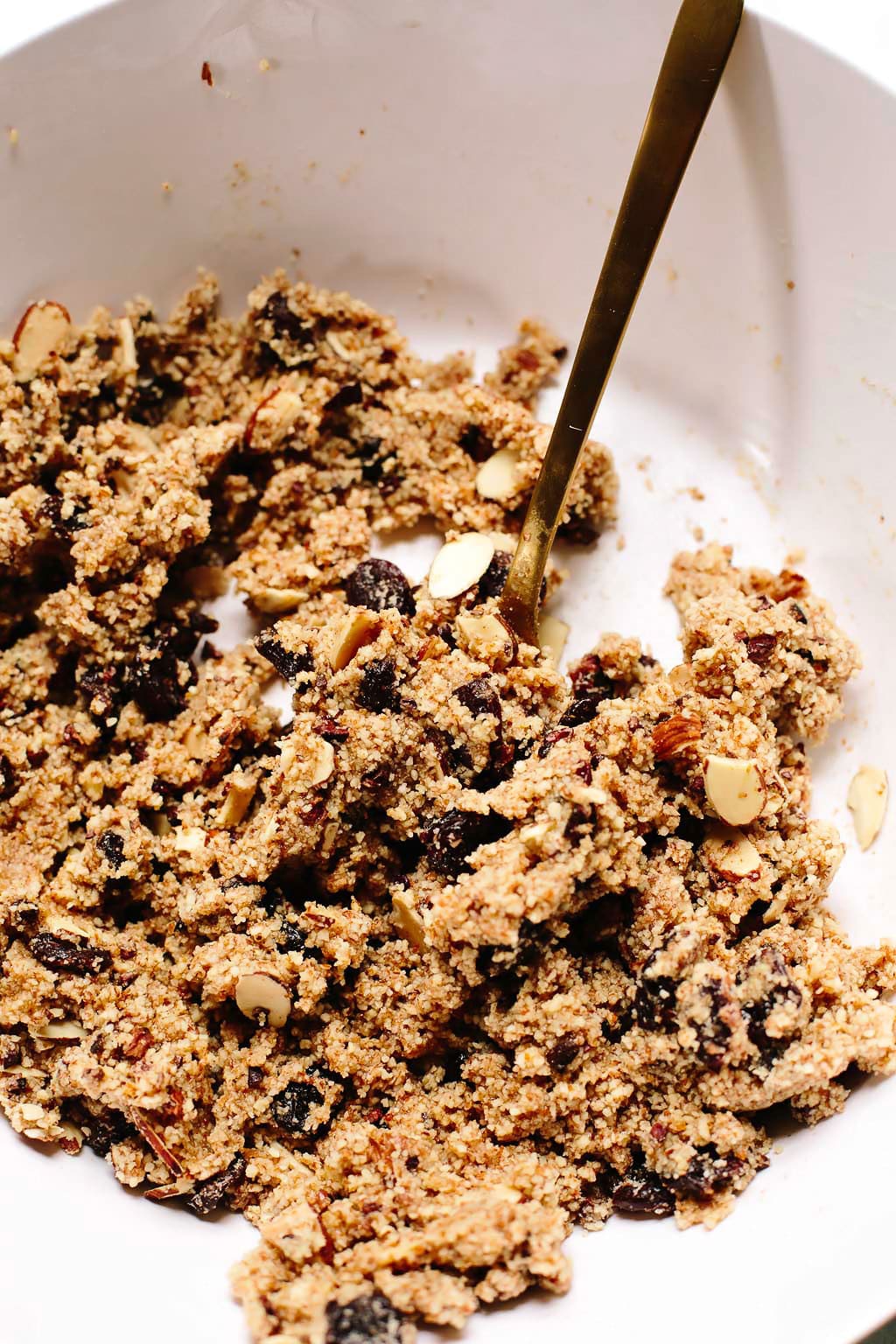 Next, transfer the "dough" to a lined cookie sheet, and divide it into two equal mounds.

Use your hands (lightly dampening them with water as needed) to shape and compact each mound of dough into two, tightly packed rectangles.

Each should be about 4 inches wide x 6 inches long x (just shy of) 1 inch thick. 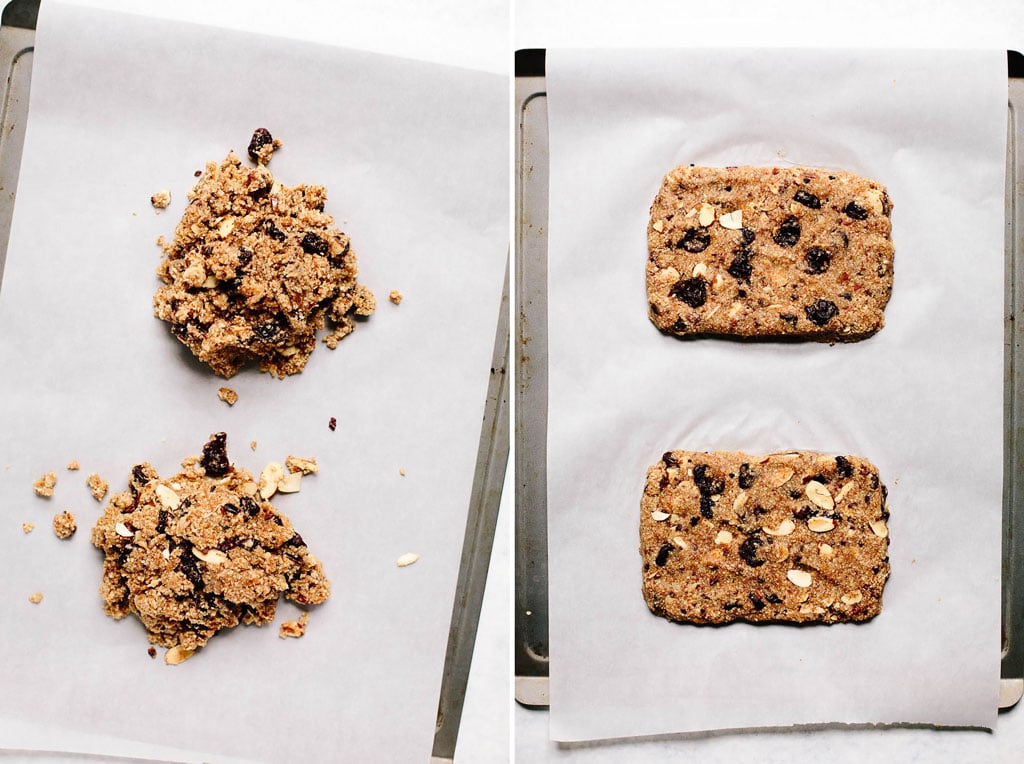 Bake at 350F for 20 to 24 minutes, or until the edges and bottoms are golden-brown and each log feels well-set.

Remove from the oven and let cool for 20 minutes. During this time, you'll also drop the oven temperature to 275F.

Once the biscotti rectangles have cooled a bit, slice them widthwise into ¾-inch-thick slices. It's best to press straight down on the biscotti using a sharp knife (avoid using a sawing motion).

You'll have 16 biscotti, each of which should be about 4 inches in length. Place them on the lined pan sliced-side-down.

Slow and steady is the route to perfectly crisp, golden-brown biscotti.

They should look like this when they're done baking... 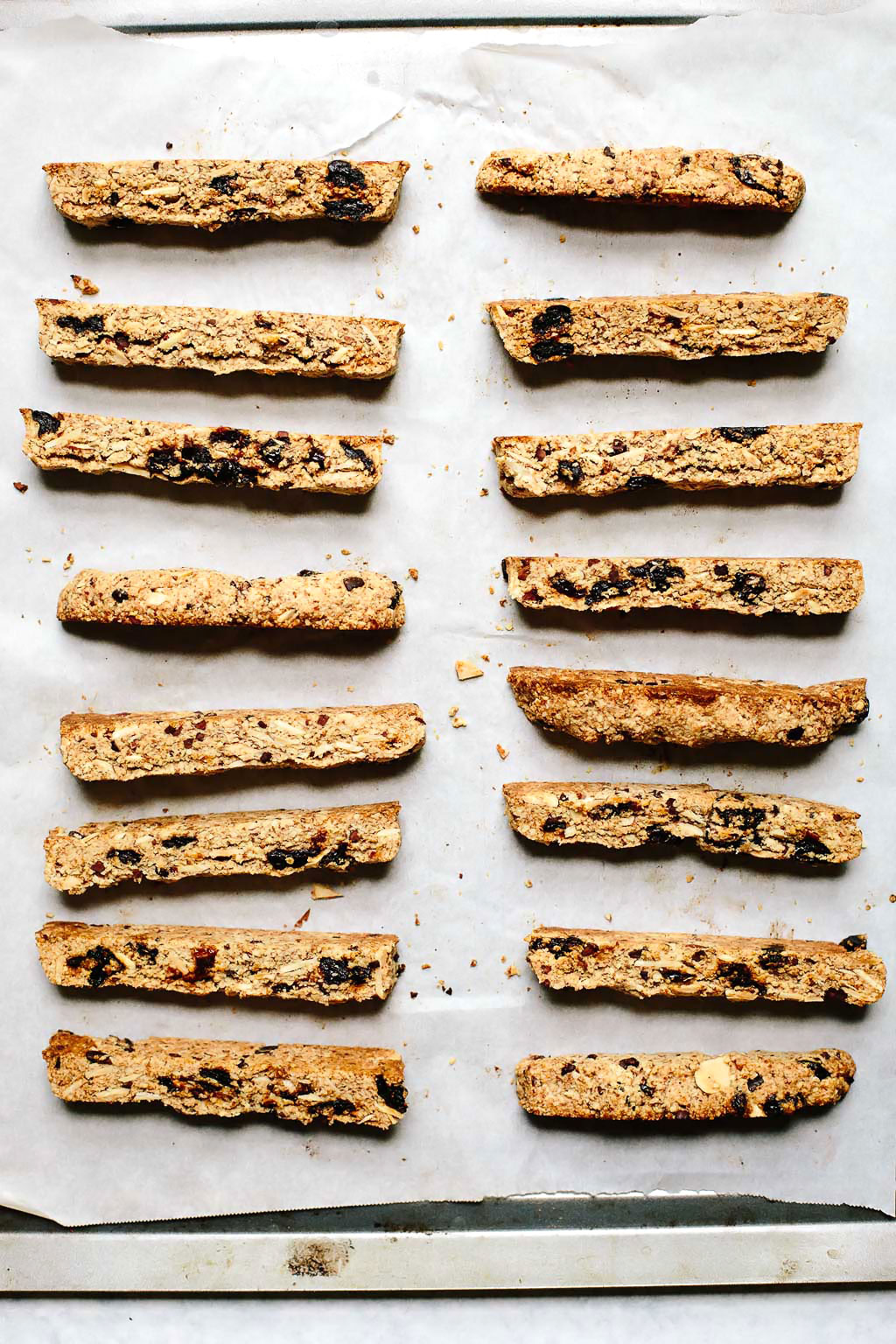 While the biscotti cool, prepare the chocolate (if using) by melting a cup of non-dairy chocolate chips in a double boiler (or microwave if you prefer) until smooth and glossy.

Once the biscotti have cooled, dunk each into the melted chocolate, sprinkle with crushed almonds, and return to the parchment-lined pan to set. 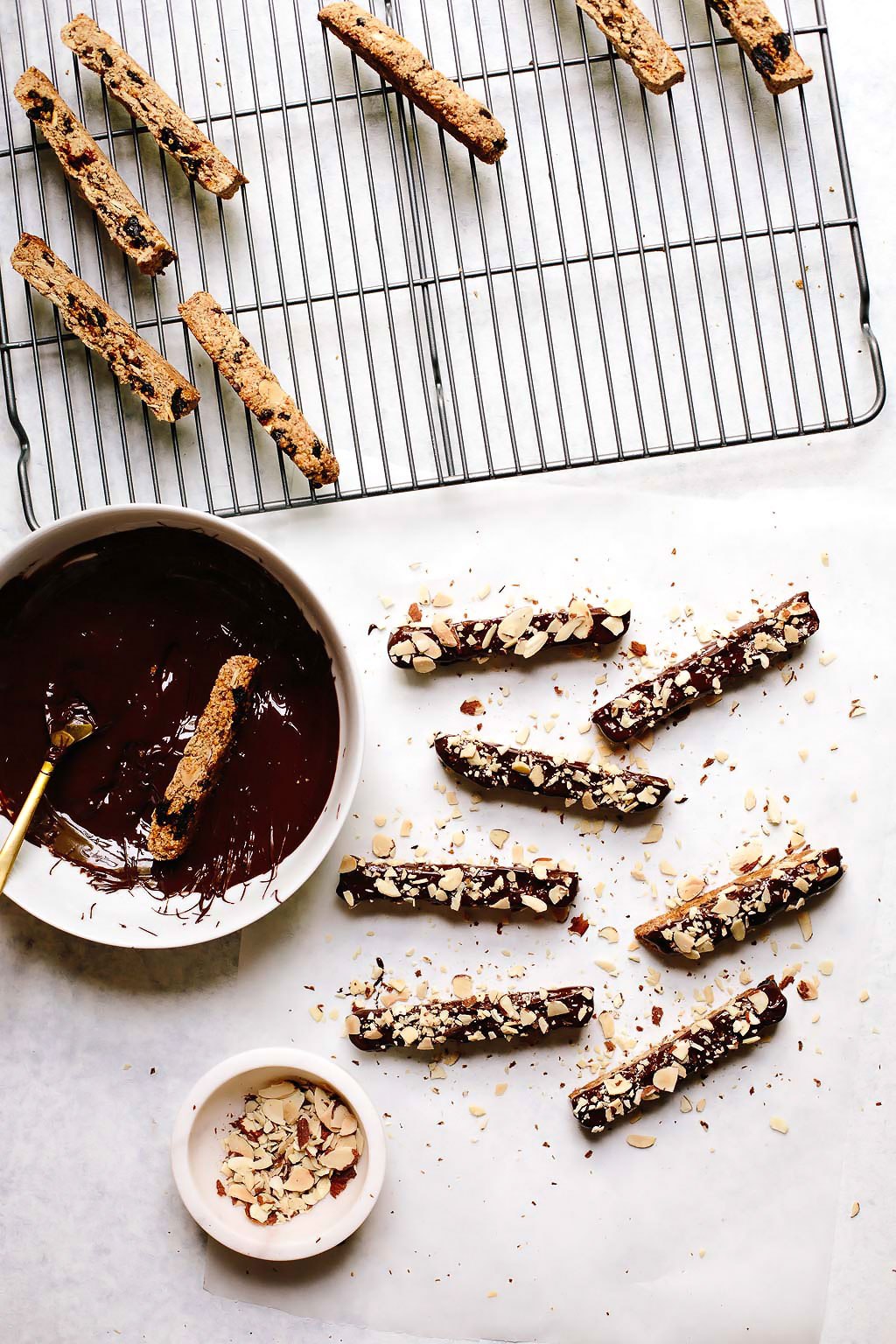 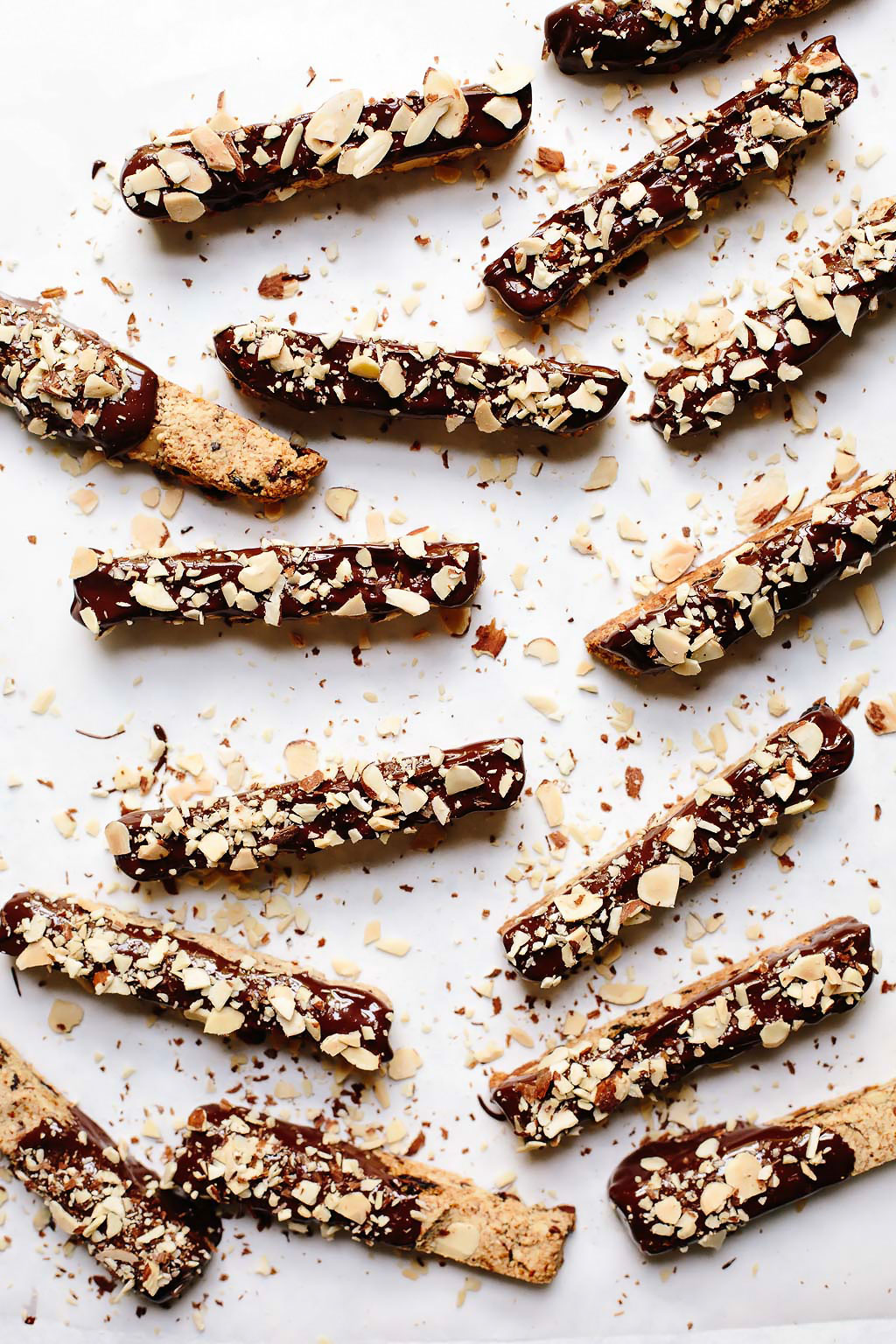 Serve the biscotti for breakfast, snack, or dessert alongside a cup of hot coffee or glass of cold plant-based milk for dunking. 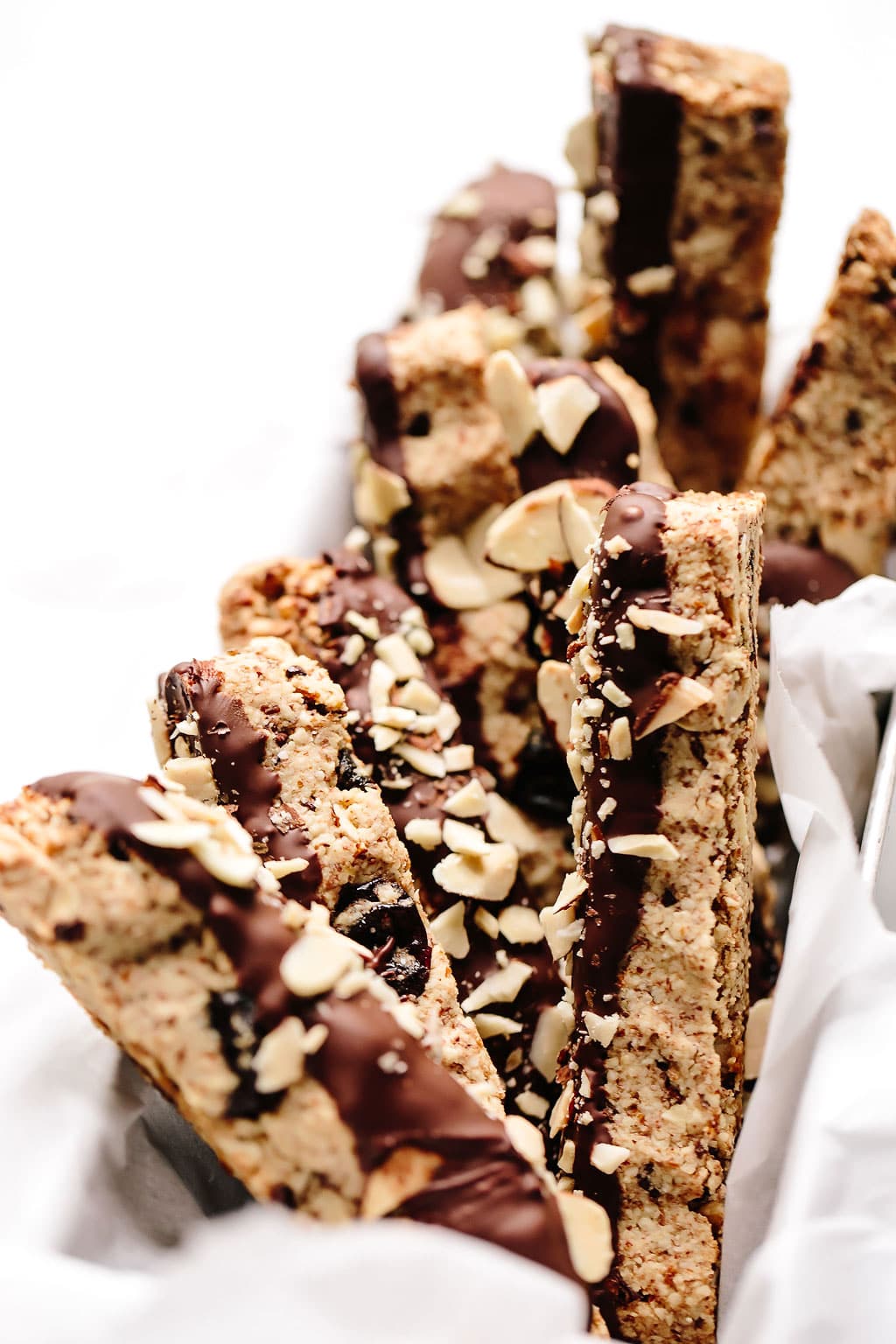 I hope you love this recipe as much as I do. If you make it, let me know! Leave a comment, rate it, and don’t forget to tag a photo #blissfulbasil on Instagram.

These vegan cherry chocolate almond biscotti will make you fall in love. Not only are they vegan and gluten-free, they're also completely grain-free and can be made nut-free, too. Allergy friendly nature aside, these biscotti are just downright delicious. Ground almonds (or sunflower seeds) serve as the "flour" in this recipe. Almonds, dried tart cherries, and cacao nibs (optional) are folded in to the base to add crunch, chew, and general mouth appeal. A small bit of maple syrup sweetens the entire lot of these crunchy treats, and the finishing touch is an optional dunk of dark chocolate.
Course Breakfast, Dessert + Snack
Cuisine Gluten-Free, Grain-Free, Italian, Vegan
Keyword grain-free, vegan
Prep Time 20 minutes
Cook Time 50 minutes
Cooling Time 40 minutes
Total Time 1 hour 50 minutes
Servings 16 biscotti
Author Ashley

*No Nuts? No problem. Substitute raw sunflower seeds for the raw almonds to make this recipe nut-free. **It's possible that cornstarch can be used in place of the arrowroot, but I haven't tried or tested this myself. If you give it a whirl, I'd love to know how it goes! ***No Nuts? No problem. Substitute pepitas for the shaved almonds to make this recipe nut-free.