This vegan beaming banana-berry detox smoothie is packed with antioxidants, vitamin C, and potassium is made with a combination of strawberries, raspberries, blueberries, and banana. Coconut water adds a boost of hydrating electrolytes, chia seeds encourage detoxification, ginger aides digestion, and fresh lemon juice adds an alkalizing kick of citrus. This light, refreshing, and energizing smoothie will ease you back into healthy eating! 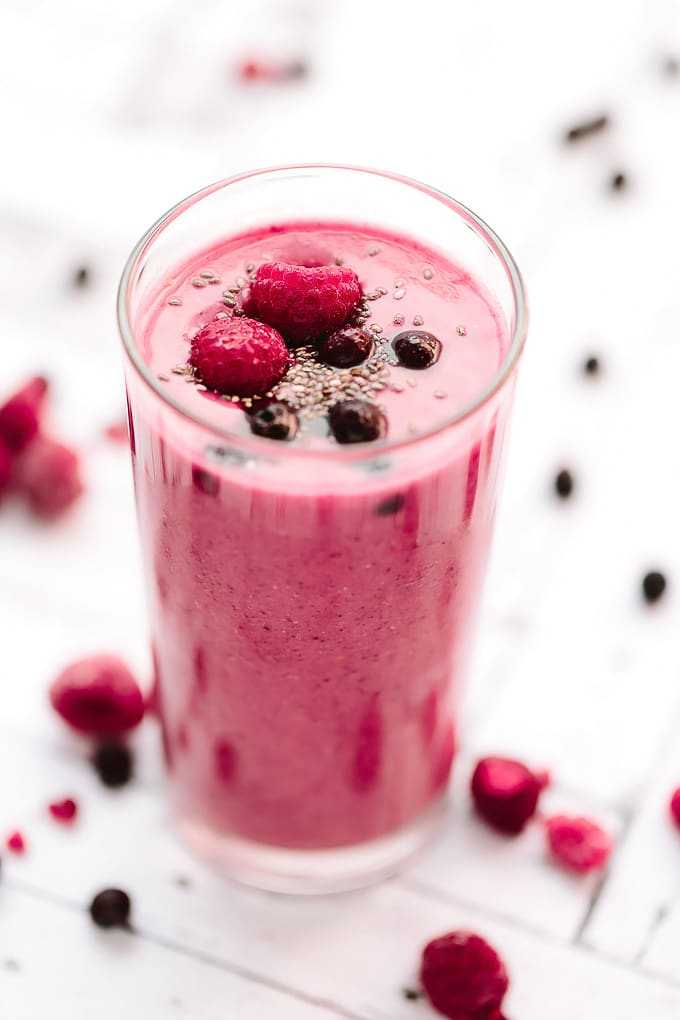 Whether you're back in the swing of things at work or enjoying another restful day off, I hope you're having a beautiful start to 2017! Two-thousand-seventeen sounds like a year way off in the future as opposed to our present point on the timeline, doesn't it? Why is that? 2016 didn't ring nearly as futuristic to the ear.

How'd your first day of the new year unfold?

Mine was spent testing and photographing this smoothie recipe in the morning, and while I could have easily spent the entire day working, I was compelled to slow down as the clock ticked to 4pm. So I did.

The latter portion of the day was spent watching a new Netflix show—The OA. Anyone else seen it? I'm slightly embarrassed but mostly proud to admit that I single-handedly devoured five episodes in one sitting. Considering each episode is an hour long, it was quite the feat of binge-watching endurance.

It felt indulgent and joyful and pleasurable and refreshing to kick back, and it was a wonderful way to ease into the new year. 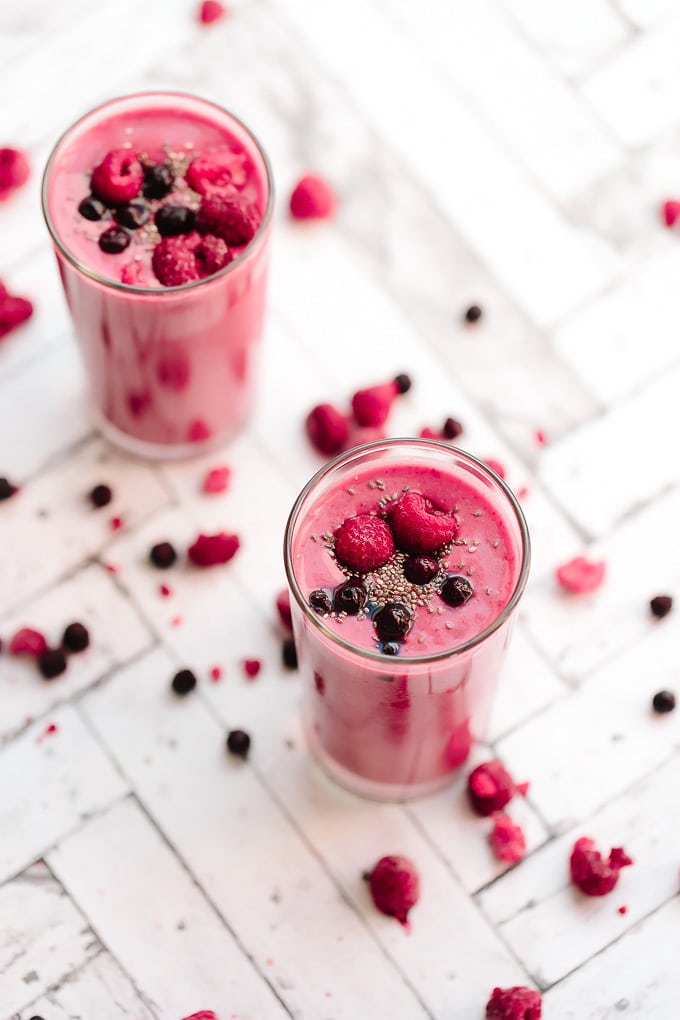 Other wonderful ways to ease into the new year? Well, this eye-catching banana-berry smoothie, for starters.

But be careful not to judge this smoothie by its cover. Beyond its playfully pretty, pink exterior, therein lies an army of nourishing, detoxifying ingredients just waiting to work their feel-good magic.

Here's a run down of the nutritional perks tucked away within this plant-powerful smoothie...

Thanks to its array of frozen berries (strawberries, raspberries, and blueberries), this smoothie delivers a punch of antioxidants, vitamin C, manganese, and fiber. A spoonful of almond butter also lends a bit of skin-nourishing vitamin E.

It offers a steady surge of energy thanks to being naturally sweetened with a ripe banana and medjool dates. Both bananas and dates are high in potassium, and as I've mentioned before, potassium is a mood-boosting and a bloat-busting powerhouse. Dates are also high in calcium and phosphorus, the latter of which is essential to the growth, maintenance, and repair of our tissues and cells. Phosphorus works with the B vitamins and supports things like kidney function and nerve signaling.

» Chia seeds are excellent detoxifiers, because their gelatinous exteriors allow them to bind to accumulated toxins in our digestive tract and politely escort them out of the body.

» Fresh lemon juice is a potent anti-inflammatory agent and is rich with flavonoids and micronutrients (e.g., vitamin C, folate, and B6). It has alkalizing effects within the body and encourages the liver to produce bile, thereby aiding detoxification and digestion. 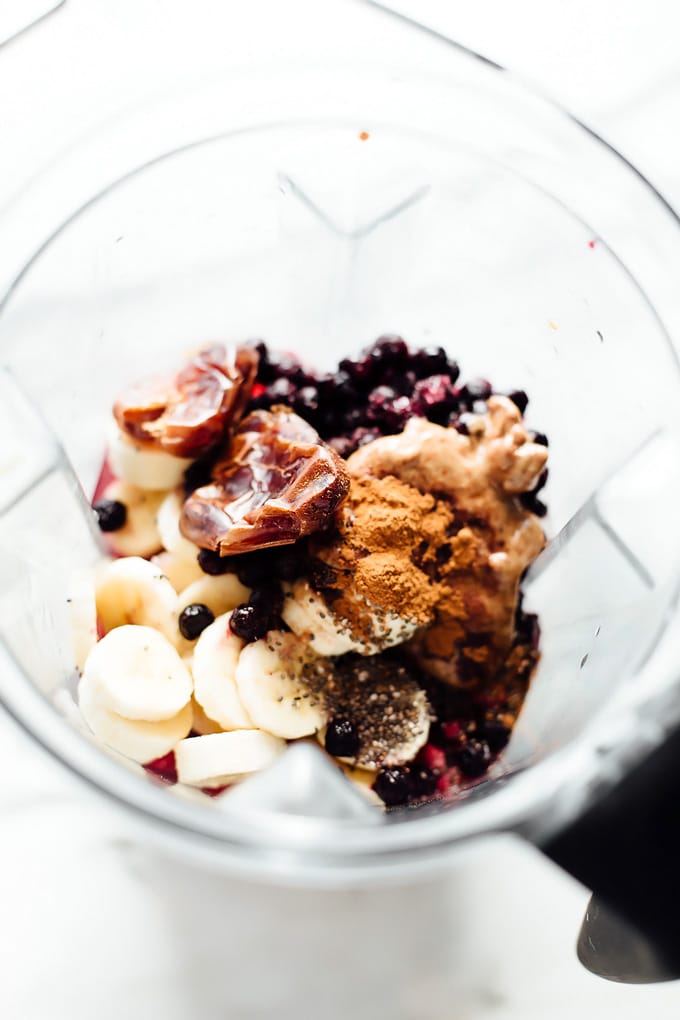 The raspberry on top? This smoothie tastes as good as it looks.

It's light and refreshing with a balance of sweet-n-tart banana-berry vibes with the slightest touch of creaminess woven throughout (thanks to the almond butter).

Here's to a fresh new year. May it be packed with feel-good smoothies, the motivation to continually push the boundaries of our personal edges, and plenty of Netflix, too. Cheers. 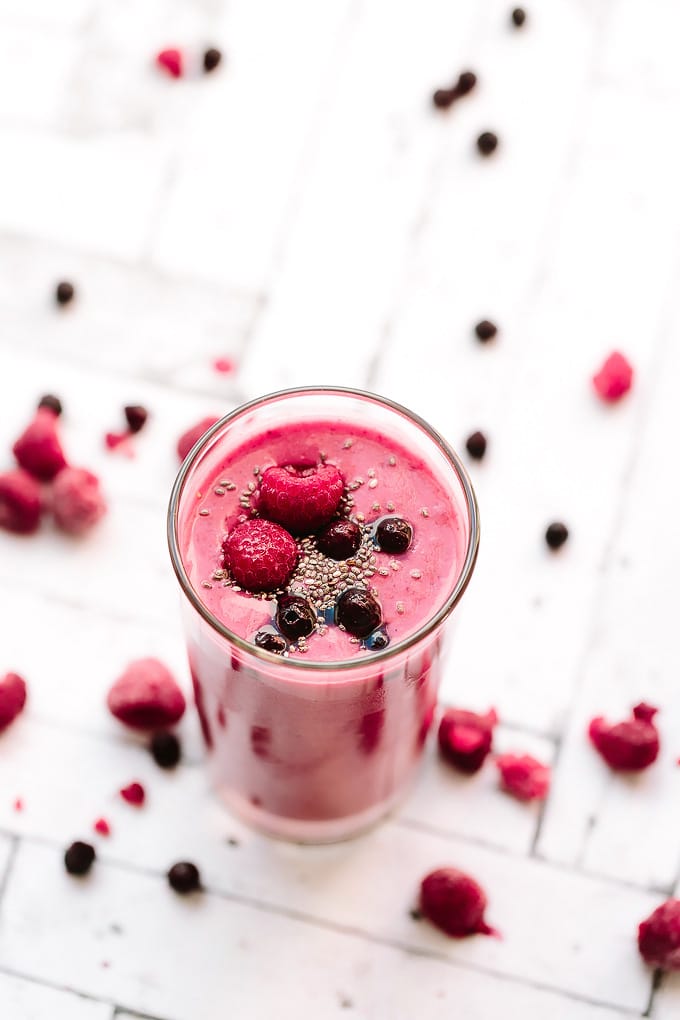 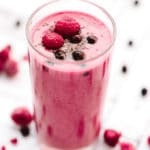