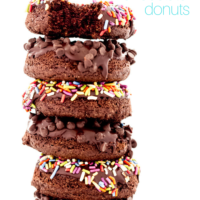 These homemade vegan baked chocolate donuts with chocolate glaze come together in just 30 minutes. Light, fluffy, and coated in rich chocolate glaze, they’re irresistible for little ones and big ones alike. 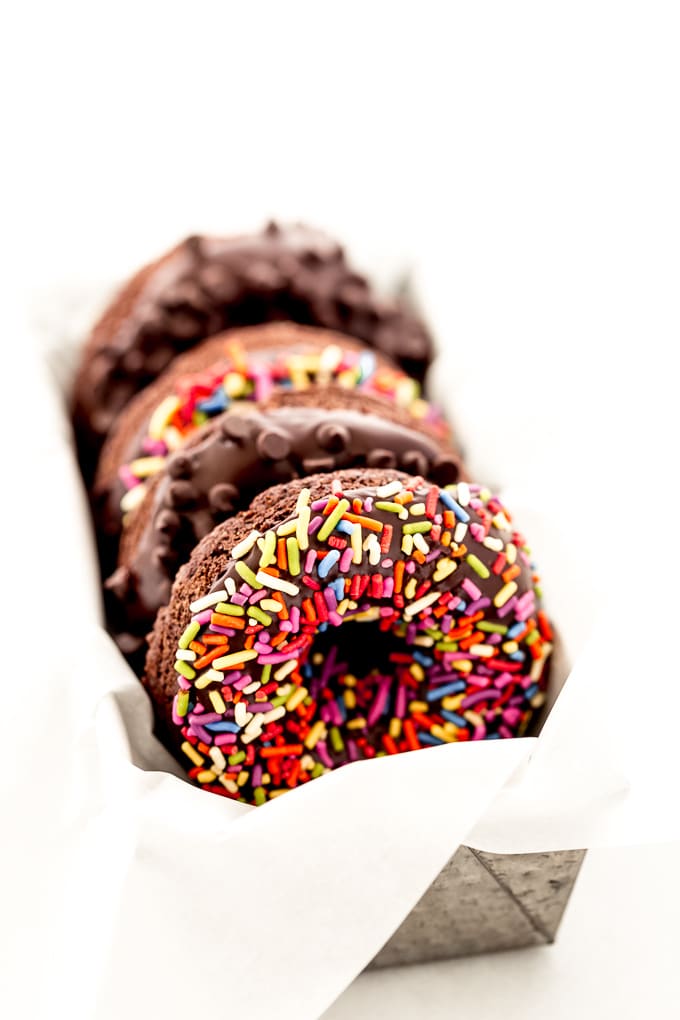 As I mentioned in my last post, being on full-time momma duty has left little time for work these days. But I’m making the best of this unexpected time with Sloane… and putting her to work as my sous chef and assistant.

Although she’s not much help with photography staging (keeps trying to eat the food props), she’s earned an A+ for taste testing anything that contains chocolate.

Since I’m working in accordance with her rules now, I’ve had to adapt my original recipe plans for this month to be more kid-friendly.

But as promised a couple weeks back, I’m doing my best to sneak in an Instant Pot recipe or two.

Please do let me know if you have recipe requests. I’m committed to doing my part, no matter how big or small, to help you stay nourished during these uncertain times.

Now, while I wouldn’t exactly label these vegan baked chocolate donuts as “nourishing,” this recipe makes for a fun kitchen excursion for little hands. Plus, I figured the bright *pop* of sprinkles would be a welcomed sight for cooped-up eyes.

Sloane took great delight in whisking together the dry ingredients and stirring the chocolate glaze, expertly describing the latter as “Ooh, so shiny and goopy!!!” Move over, Giada. 👋🏻

But of course her favorite part was adding a toddler-sized handful of sprinkles on top of the donuts (while spilling approximately half of each handful onto the counter 😅).

FYI, I found naturally colored vegan sprinkles on Amazon a while back. They came in a gigantic tub, so I’ve been sprinkling them here and there and everywhere for nearly a year now. Sloane couldn’t be happier with this bulk purchase. 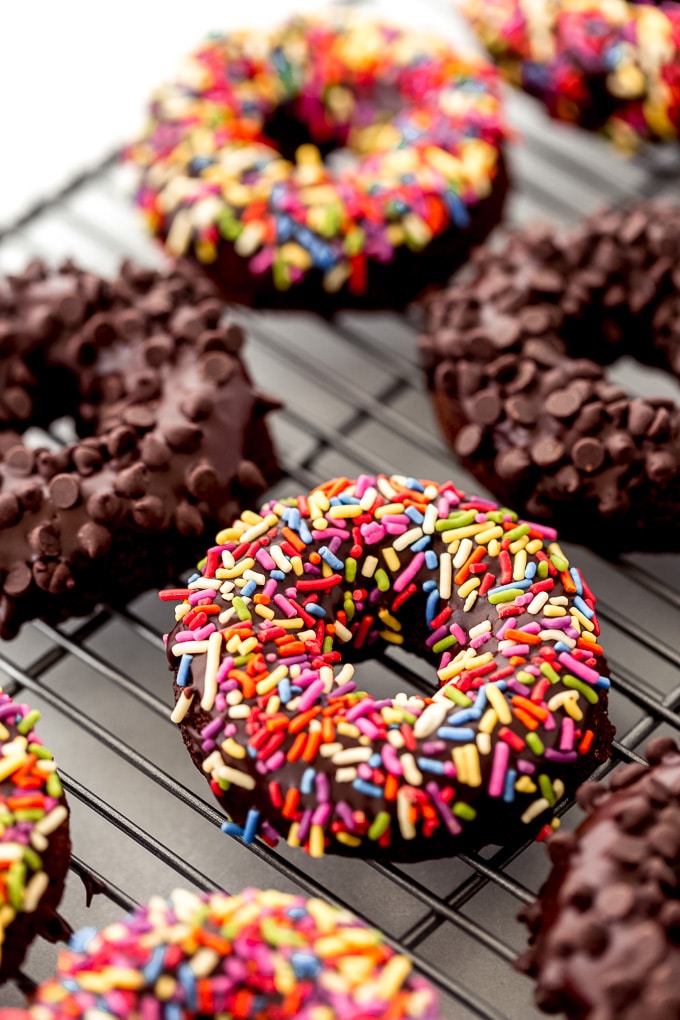 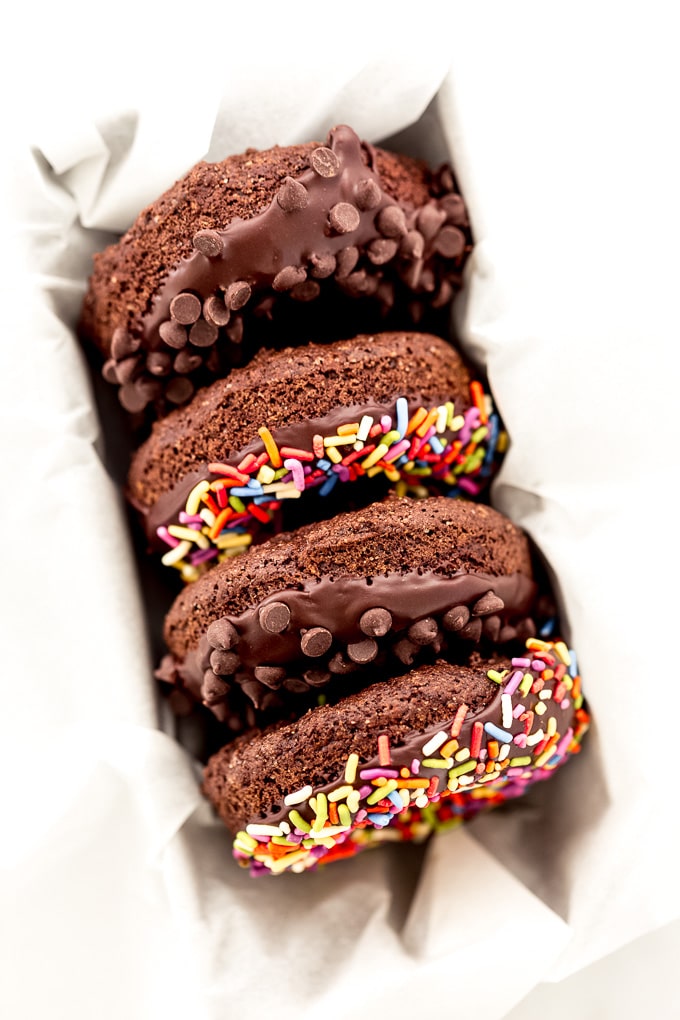 I’d originally planned to top all the donuts with sprinkles, but my sous chef spotted a bag of mini chocolate chips in the pantry and insisted we incorporate them into the recipe in some way. And so we ended up using a mix of sprinkles and chocolate chips for topping.

The recipe for these donuts is based off this vanilla donut recipe that I shared last summer (ahh… simpler times).

Like their vanilla predecessors, these donuts require just 15 minutes of active kitchen time and less than 15 minutes to bake.

Give the mixture a thorough stir with a spatula, ensuring every last bit of flour is incorporated.

Then, pipe or spoon the batter evenly into two lightly greased donut pans.

This donut batter is quite thick and fluffy. For this reason, I’ve found it’s easiest to use a pastry bag to pipe the mixture into the pan, but you can absolutely make it work without one if needed.

Bake the donuts for 10+ minutes, or until a toothpick inserted into the center of one comes out mostly clean with a few moist crumbs at the tip.

Let the donuts cool for just five minutes in the pans. Then, transfer them to a wire cooling rack to cool completely. If you let them cool completely in the pans, they’ll end up steaming themselves, which you don’t want—makes them a bit chewy.

How to Make Vegan Chocolate Glaze

You’ll prepare the glaze when the donuts are nearly cool.

Frosting and glaze recipes can intimidate people, but I promise it’s beyond easy to make this vegan chocolate glaze.

Simply add the following ingredients to a bowl:

Then, stir, stir, stir until you have a thick, glossy, and smooth chocolate glaze.

The amount of water you’ll need to add will depend on various factors, including the humidity level where you are, how fine your powdered sugar is, etc. I recommend starting with just two tablespoons and working your way up from there incrementally. During testing, I typically used between 6 and 7 tablespoons total, but it’s very dry here right now.

You want the glaze to be a little bit thicker than you’re comfortable with so that it’s nice and gluey and holds the sprinkles and/or chocolate in place without running off the donuts.

*fyi, you can make homemade powdered sugar by blending granulated sugar or cane sugar in a high speed blender until a powdered consistency is achieved. 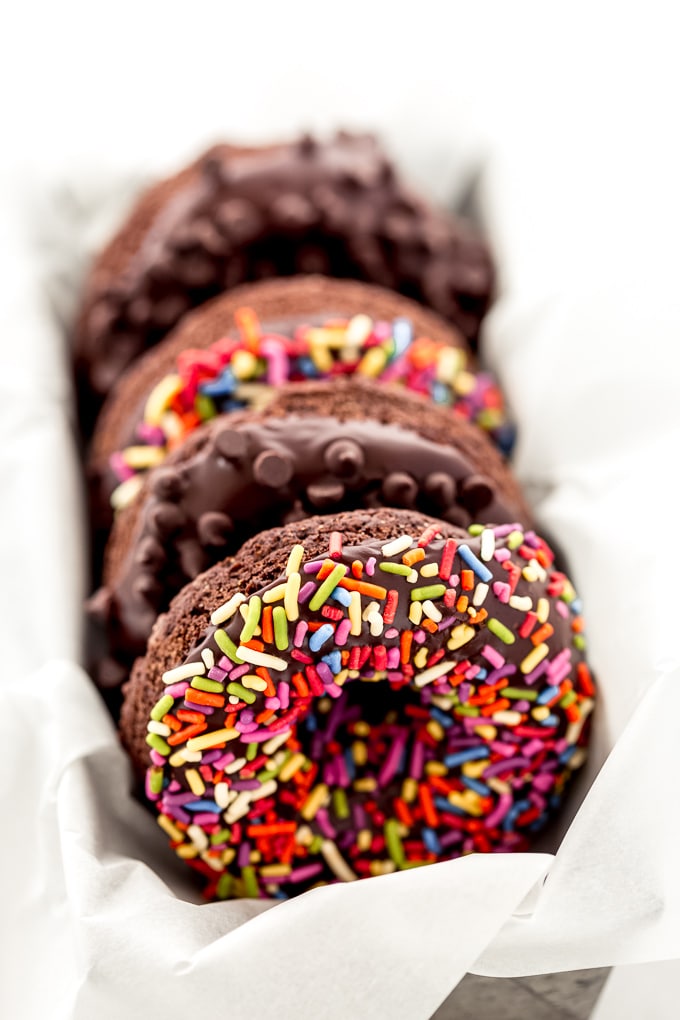 Once ready, dip the top of each donut into the glaze. Then, generously garnish each with sprinkles and/or mini chocolate chips.

Allow the glaze to set (or not if you’re surrounded by antsy toddlers 🤷🏻‍♀️) and then enjoy. 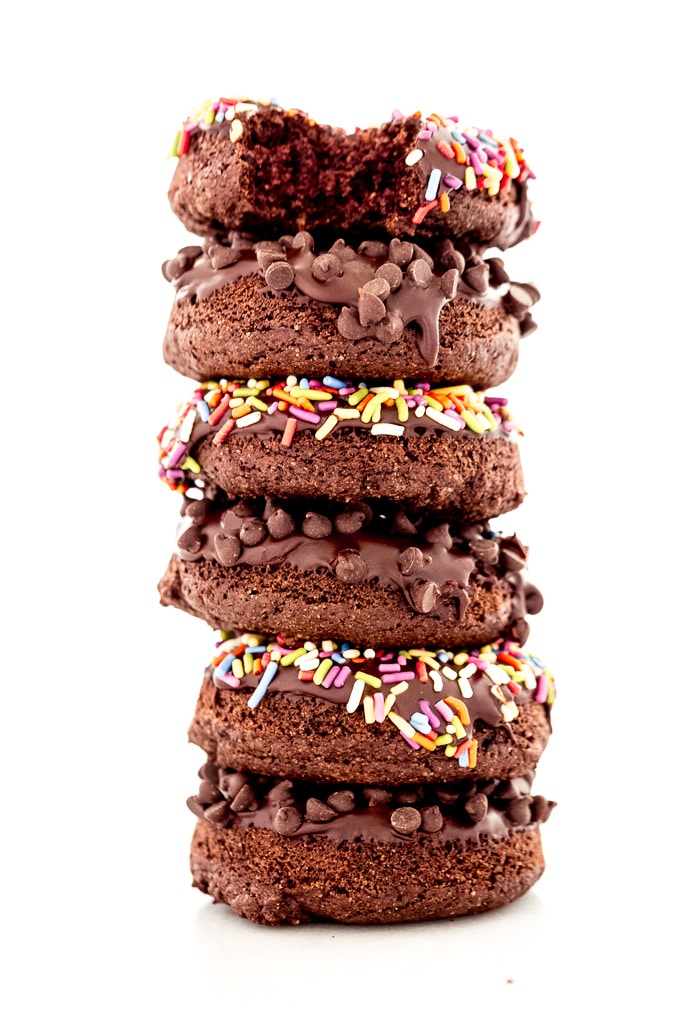 I hope you love this recipe as much as Sloane does! 💗 If you make these vegan baked chocolate donuts, let me know! Leave a comment, rate the recipe, and don’t forget to tag a photo #blissfulbasil on Instagram. 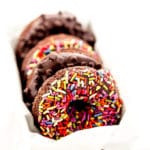 For the Glaze + Topping

*If you don't have (or like) spelt flour, you should be able to substitute all-purpose flour instead. If you try it, please let me know how it goes. **Feel free to substitute another mild-flavored oil in a pinch (just be sure it's liquid at room temperature—not sure how something like coconut oil would fare in this recipe).

Thanks for Stopping By!