This shredded rainbow slaw with sweet tamari-sesame dressing is home to oodles of crispy, crunchy veggies. Think shredded cabbages, julienned red bell pepper, thinly sliced scallions, silky mango, and minced cilantro. Everything gets tossed together with a delightful sweet and tangy tamari-sesame dressing and topped with toasted brazil nuts and sesame seeds. The result is a slaw that's as addictive as it is nutritious. 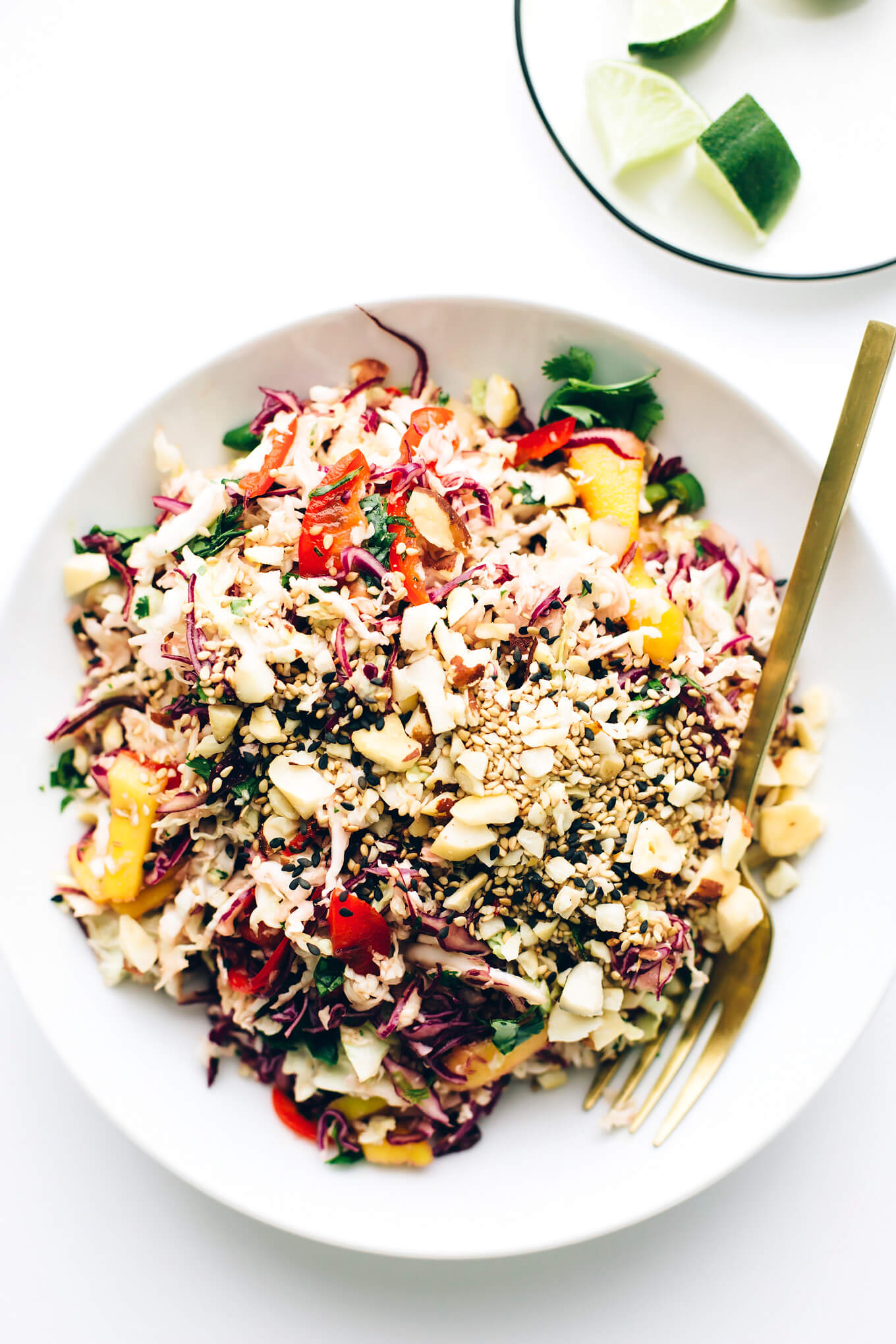 This  is a recipe I've been tinkering with for the last two months, and I'm thrilled to finally be sharing it here on the blog.

What started out as an intense veggie craving one balmy, bachelor-fueled Monday night in February quickly morphed into a vegetable shredding frenzy... 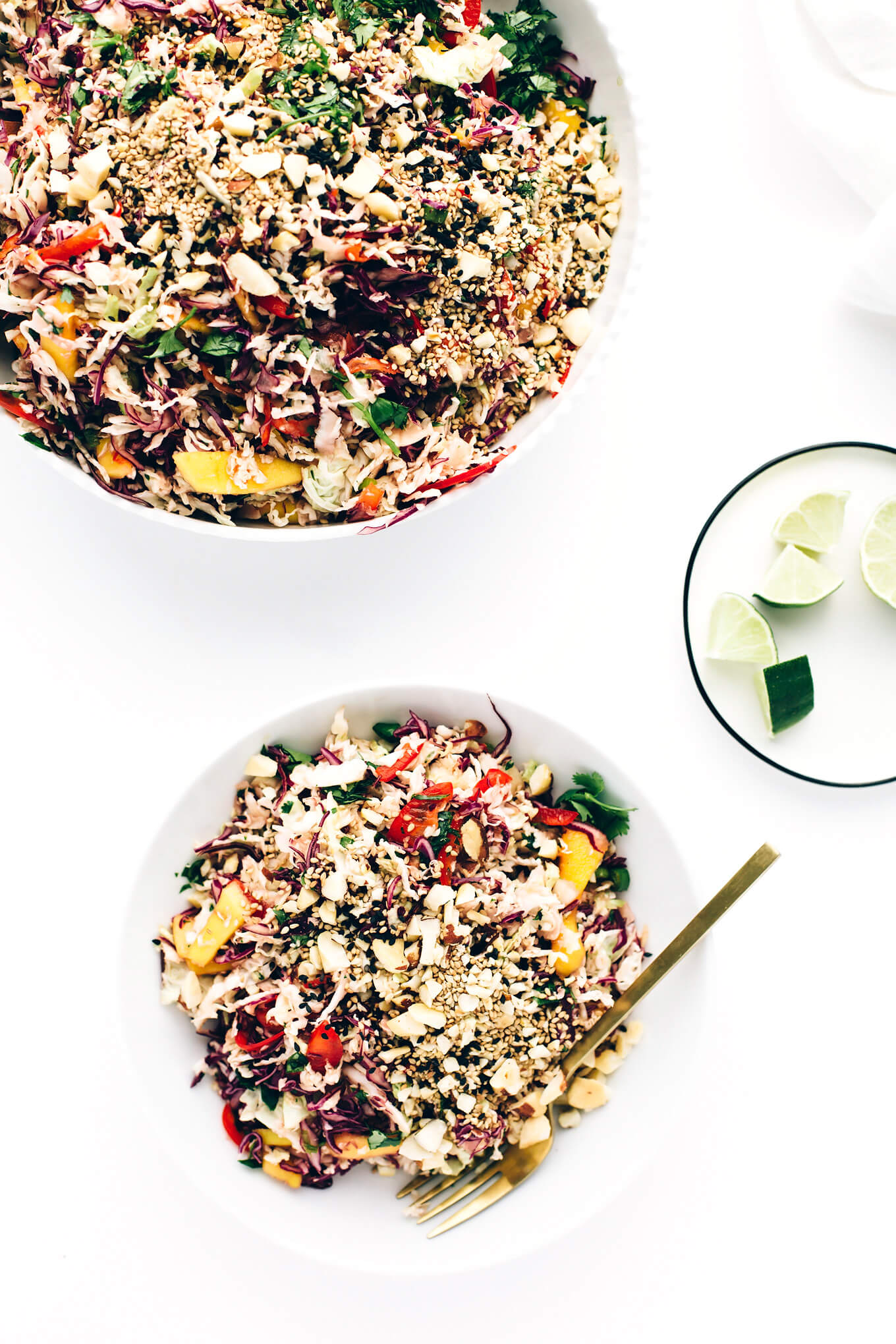 After toying with the types of cabbage used, as well as the method used to slice the vegetables and the ratio of sweet-to-salty ingredients in the dressing, this final favorite version came to be.

And let me warn you: it's one of those salads that's best enjoyed by yourself or surrounded by nonjudgmental loved ones, because it's likely to induce a frenetic fork-to-salad-to-mouth-repeat motion.

You know the type? The kind that communicates to any and all bystanders: This salad is so good that I can't stop, won't stop, will never stop. What's that? The shredded veggies have gone airborne because of the speed of my consumption? Child's play. Watch this. [dumps entire salad into mouth]

Even my occasionally roughage-averse husband joins in on the frantic fork-to-mouth repetitions with this slaw.

All those crispy, crunchy veggies. All those toasted seeds. All that sweet and tangy tamari-sesame dressing. Who could get enough? Not I, not I.

To make this shredded rainbow slaw with sweet tamari-sesame dressing, you'll start by shredding the cabbages.

After testing the recipe with various types of cabbage (and then testing some more), the two cabbages that reigned supreme were savoy cabbage and purple cabbage.

Savoy cabbage looks a lot like traditional green cabbage, only its leaves are richly textured with ripples and ridges... 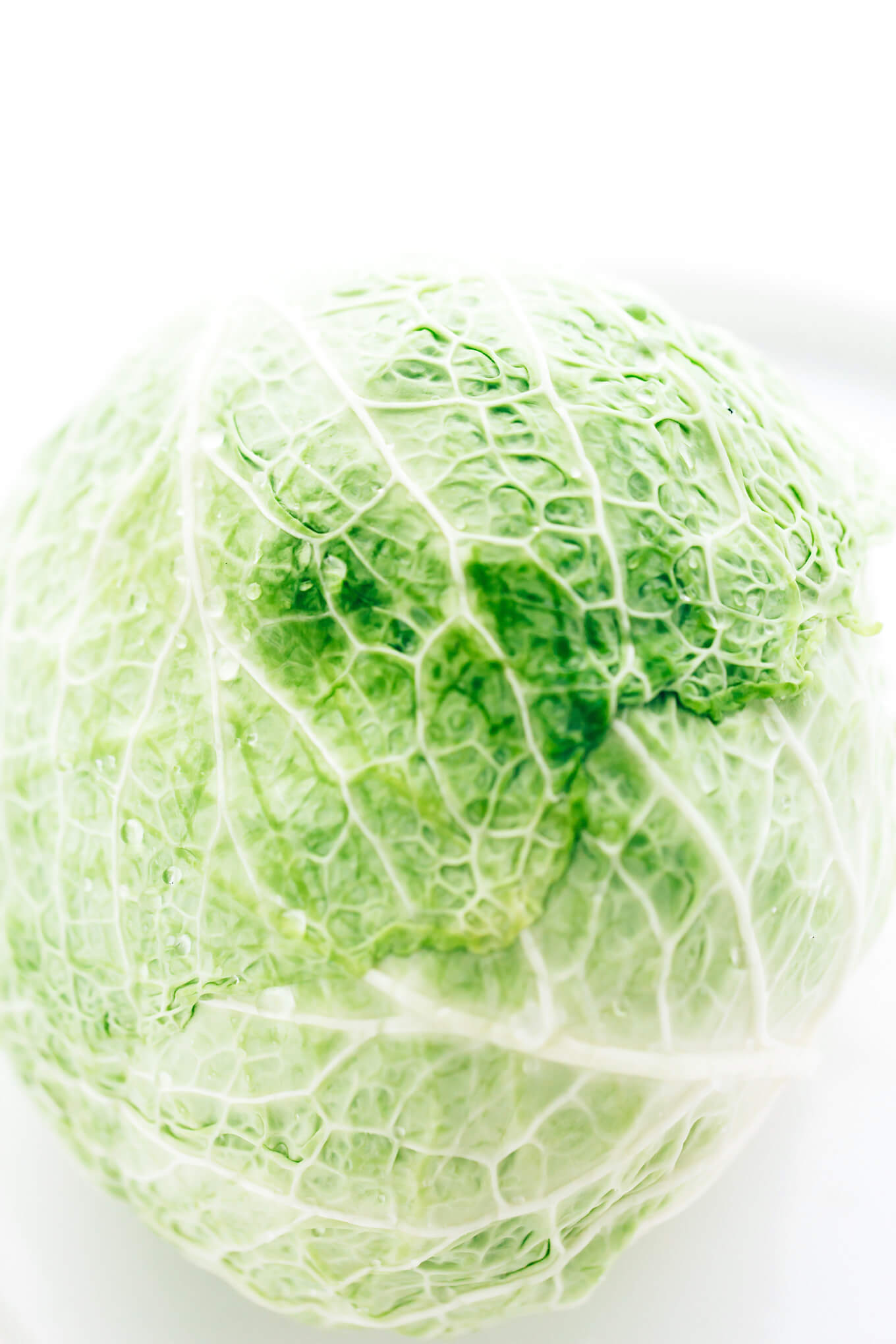 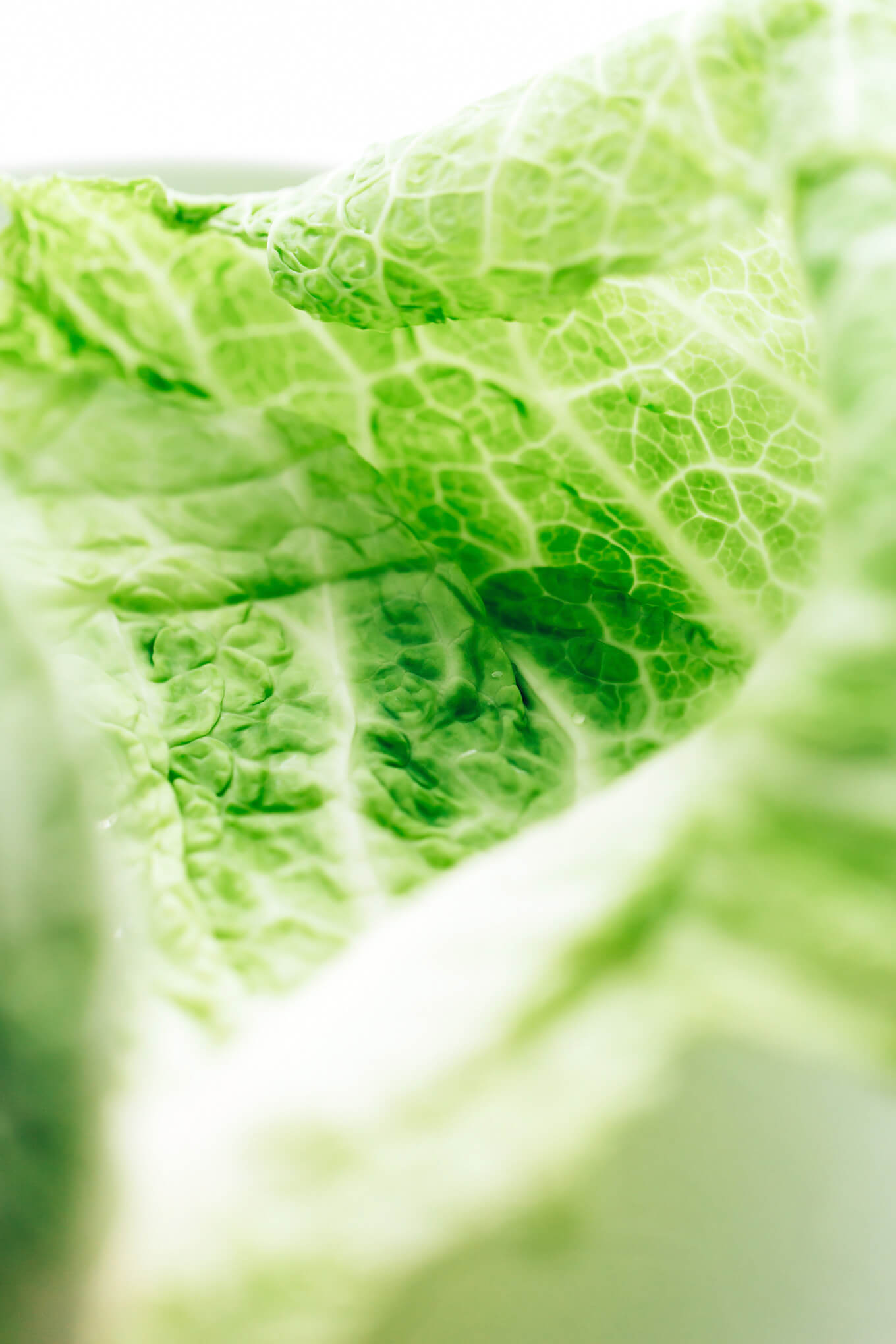 Although traditional green cabbage will work in an absolute pinch, it doesn't hold up nearly as well as savoy cabbage in this slaw. Why? Because all that lovely texturing allows the dressing to cling to the savoy cabbage, infusing it with flavor.

Once you've washed and dried your cabbages, slice them into manageable wedges. Then, use a mandolin to very, very carefully shredded the cabbage (seriously, be careful, working with a mandolin requires extra care and precaution). Add the shredded cabbage to a large serving bowl.

Then, get to work on slicing and dicing the remaining salad ingredients...

Thinly slice a bunch of scallions.

Cut a peeled mango into matchsticks.

Add everything to the serving bowl.

While the seeds cool, prepare the sweet tamari-sesame dressing by whisking together pure maple syrup, rice vinegar, reduced-sodium tamari, and a bit of toasted sesame oil. Taste the dressing and adjust the flavors according to your preferences, adding more maple syrup, vinegar, tamari, or sesame oil, to taste. 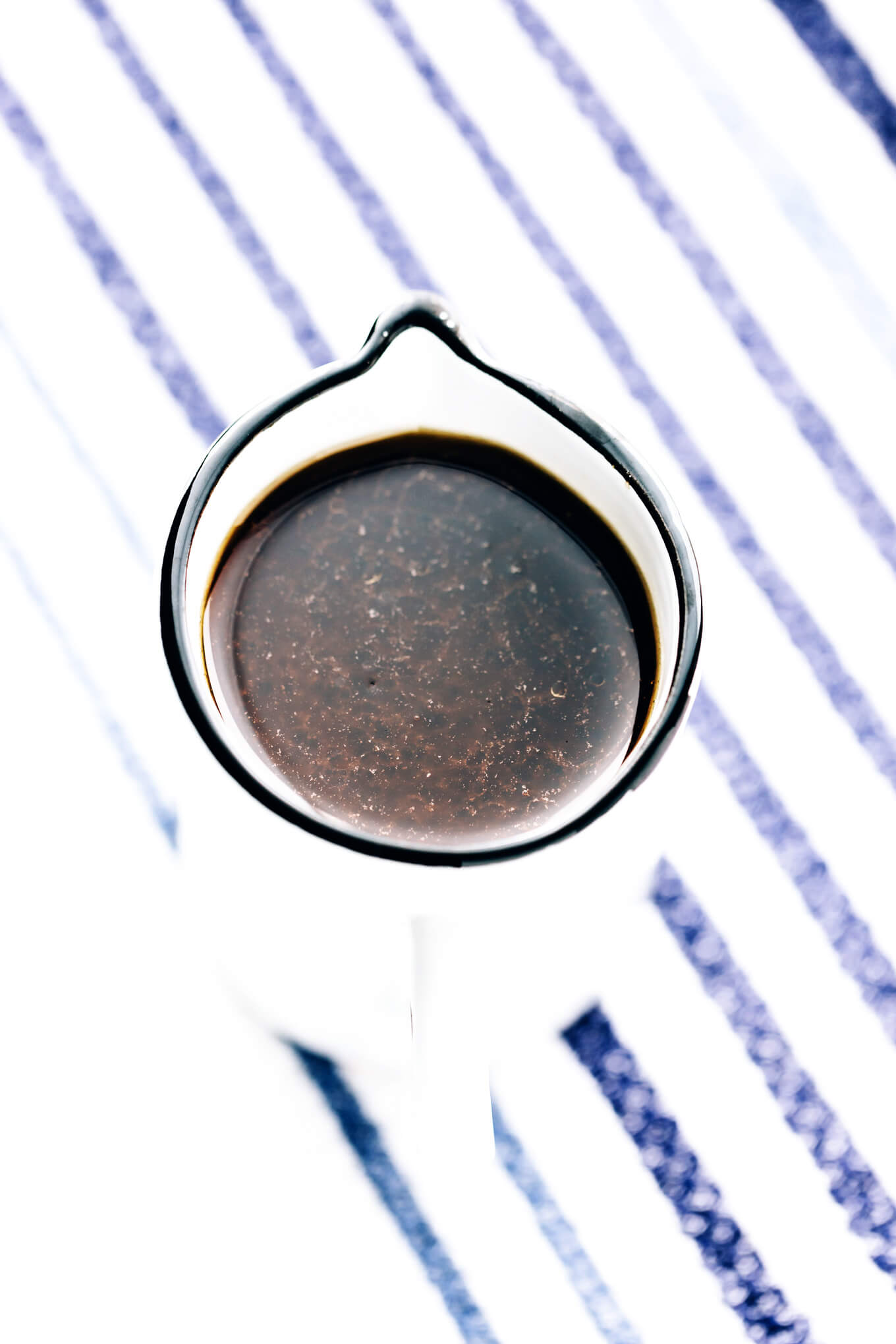 Once all of the slaw elements are prepared, pour the dressing over the veggies and toss to coat.

Just before serving, sprinkle with the toasted nuts and seeds. 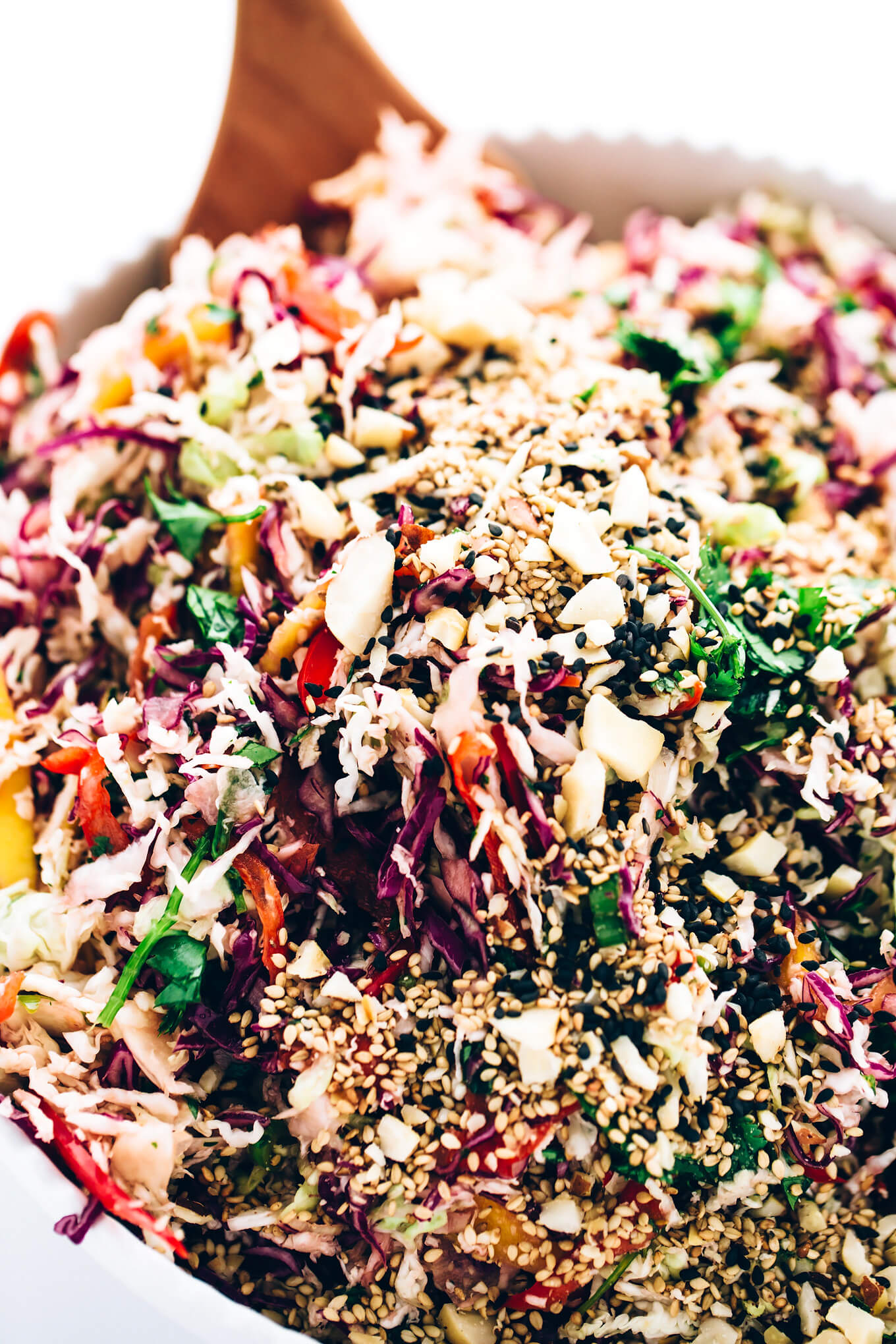 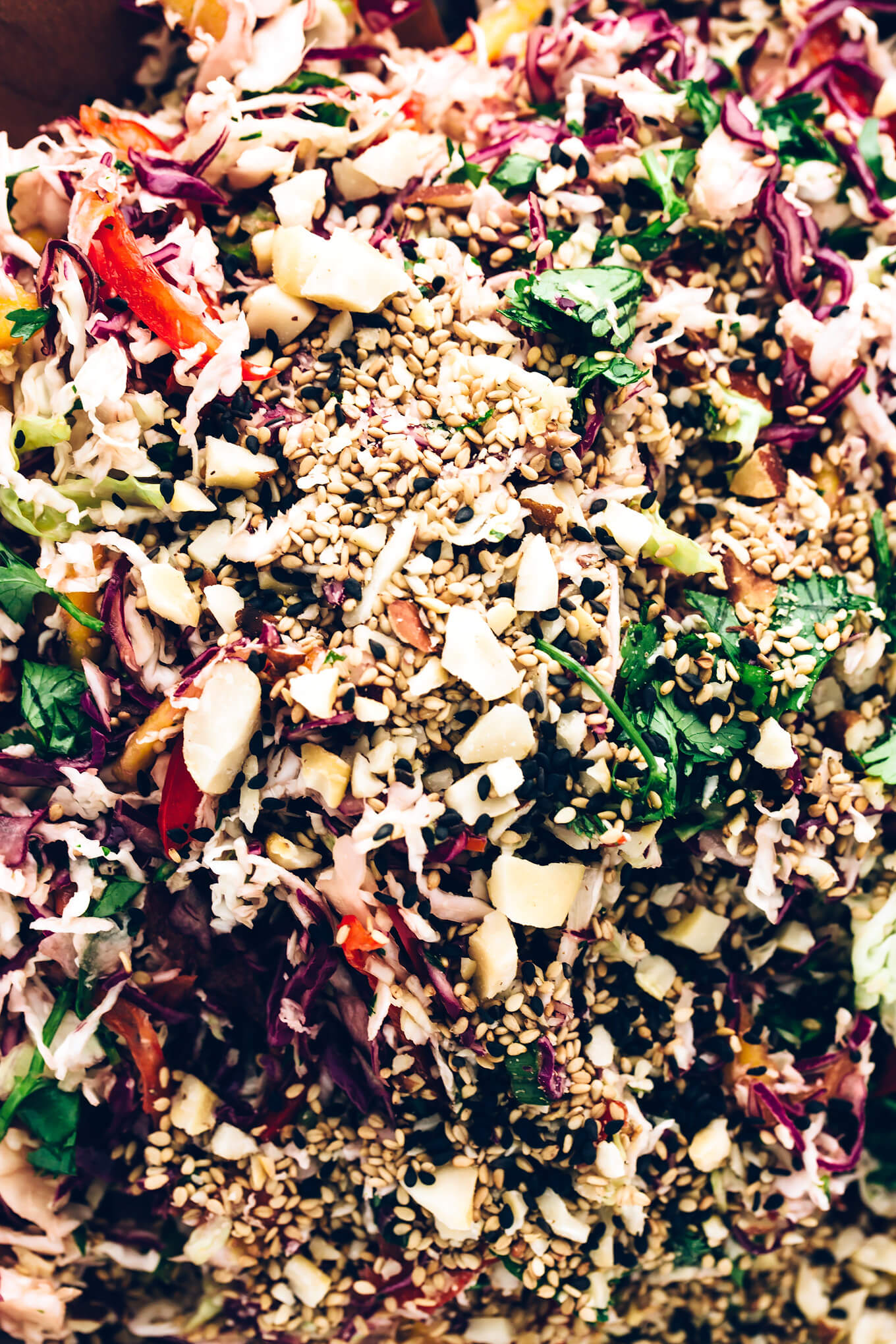 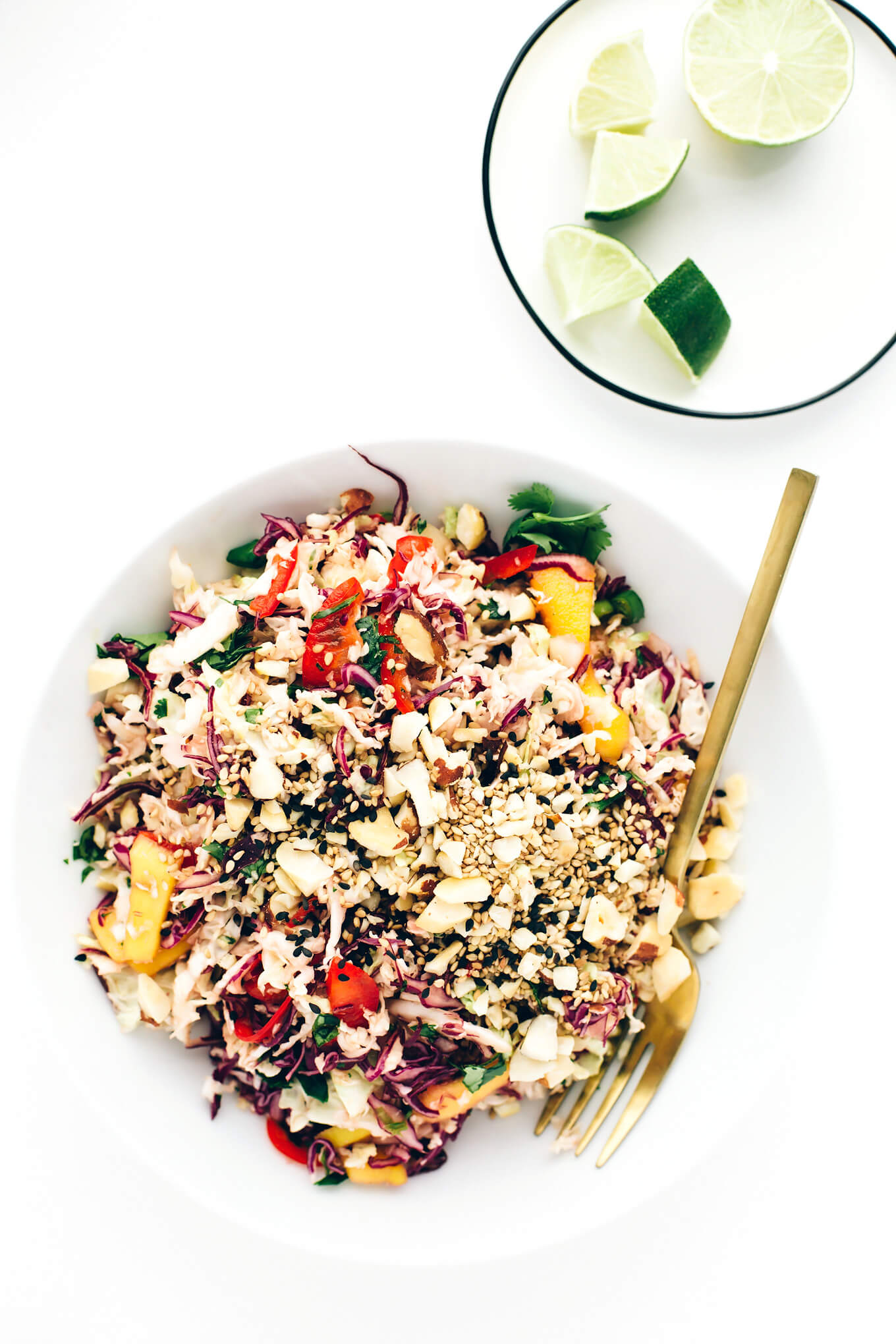 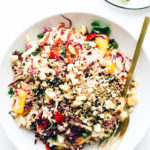