This roasted sesame-garlic eggplant is a simple, flavor-packed side dish that's sure to wow a crowd. Cubed eggplant is roasted until tender and caramelized and then tossed in sweet and tangy sesame-garlic sauce. A finishing sprinkle of fresh cilantro and sesame seeds adds a pop of color and a teeny, tiny crunch. 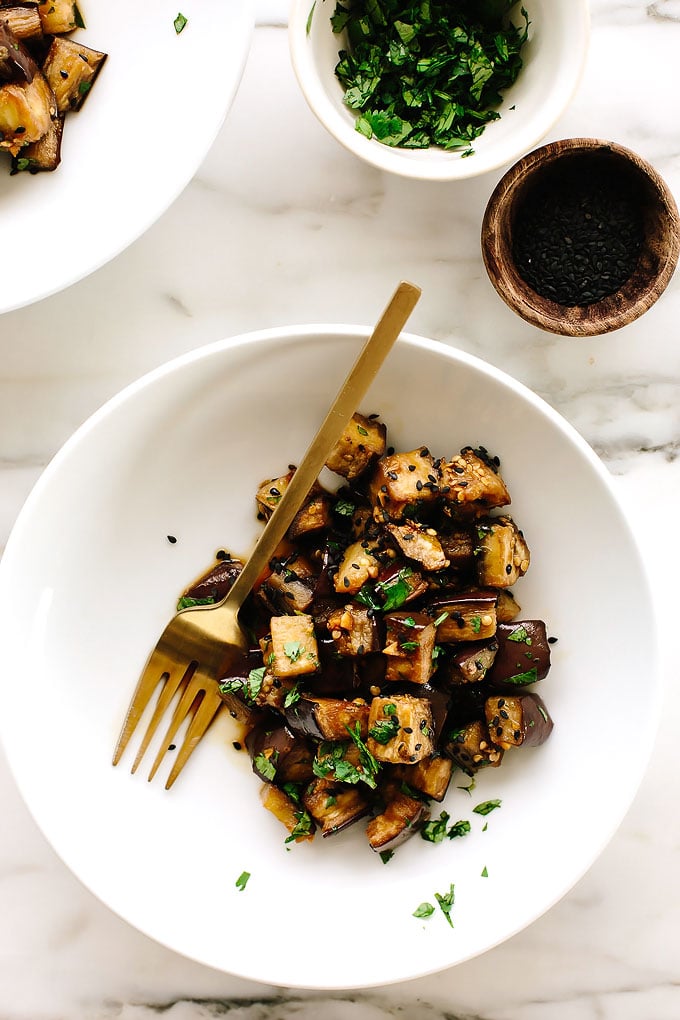 During a recent trip to South Carolina with Dan's family, I had the most gloriously tasty sesame eggplant.

The eggplant itself was tender, caramelized, and drenched with sauce. And the sauce? Well, it was subtly sweet, garlicky, and brimming with toasted sesame oil.

I'm tellin' you, I could have eaten this eggplant by the bucketful.

I've been toying with a healthier rendition ever since—because seriously, there was probably a ⅓ cup of oil in just one small portion, and although I'm certainly not oil-phobic, I want to be able to eat yummy sesame eggplant every day without feeling groggy and weighed down afterwards.

And so, yes, this version is way less oily than its mentor and a bit brighter and lighter, too. Perfect for the transition from steamy summer moments to crispier fall feelings. 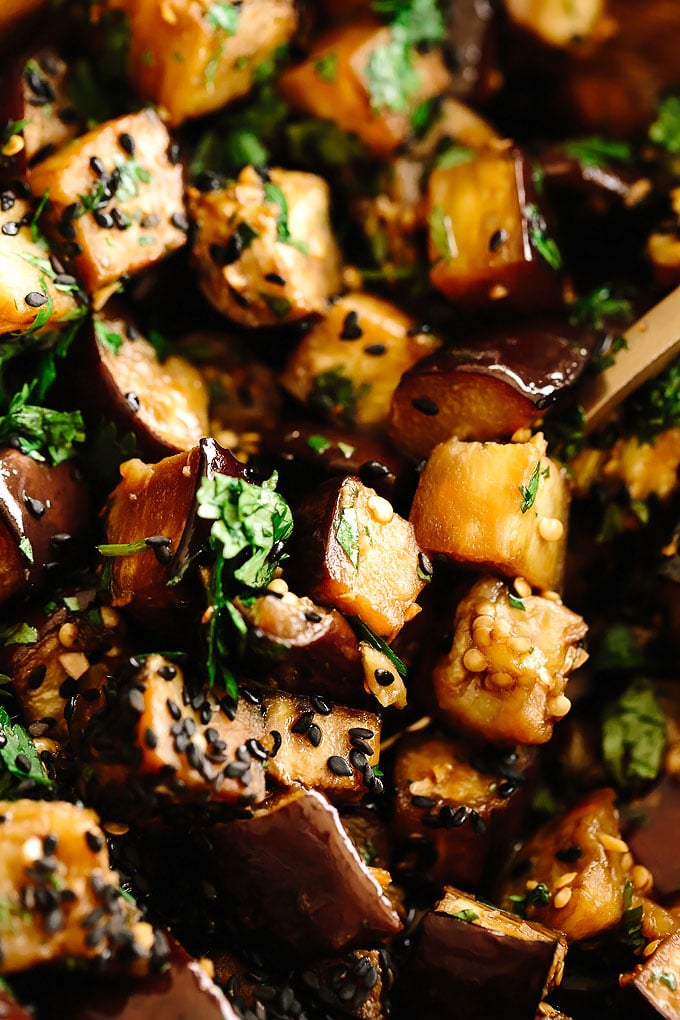 To make this roasted sesame-garlic eggplant, you'll start by washing up two medium to medium-large globe eggplants. I'm sure other varieties of eggplant (e.g., Japanese) would work well here, too, but you'd have to use several since they're considerably smaller than globe eggplant. 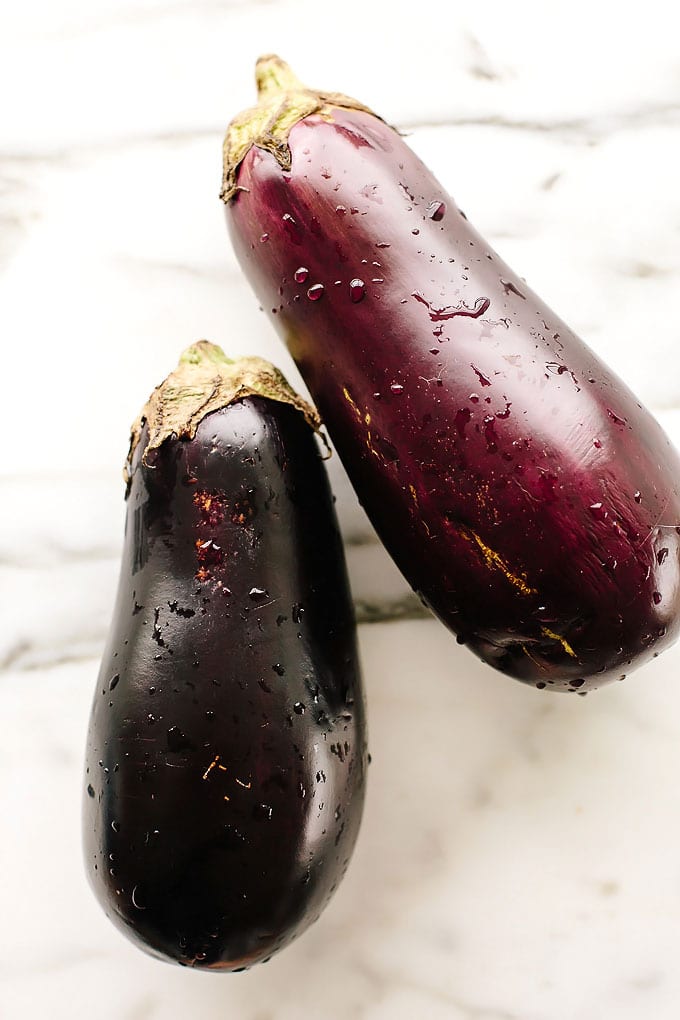 Once you've washed your eggplants, slice off the ends and cut into ¾-inch cubes. There's no need to remove the skin. In fact, I quite love the pretty purple hue it lends to the dish. But of course, if you really prefer it not be there, then do feel free to peel it away before slicing and dicing.

Spread the eggplant cubes out over a parchment-lined pan, drizzle with a bit of olive oil, and toss to coat. 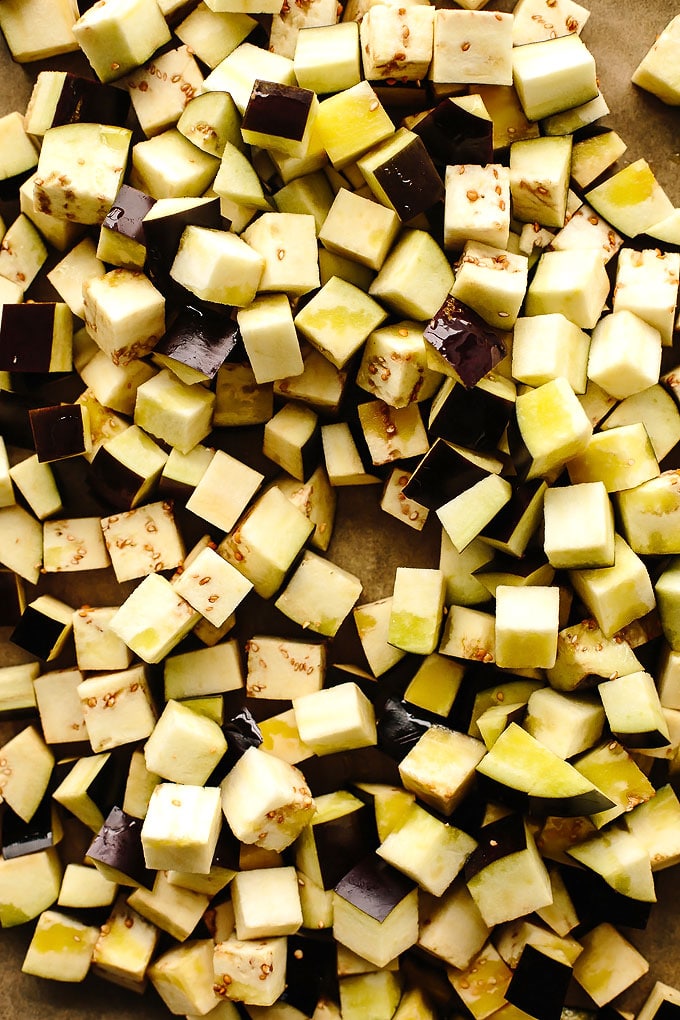 Then, pop the pan in the oven and roast for 25 to 35 minutes, or until the eggplant cubes are tender, beginning to caramelize, and have lost their sponginess. 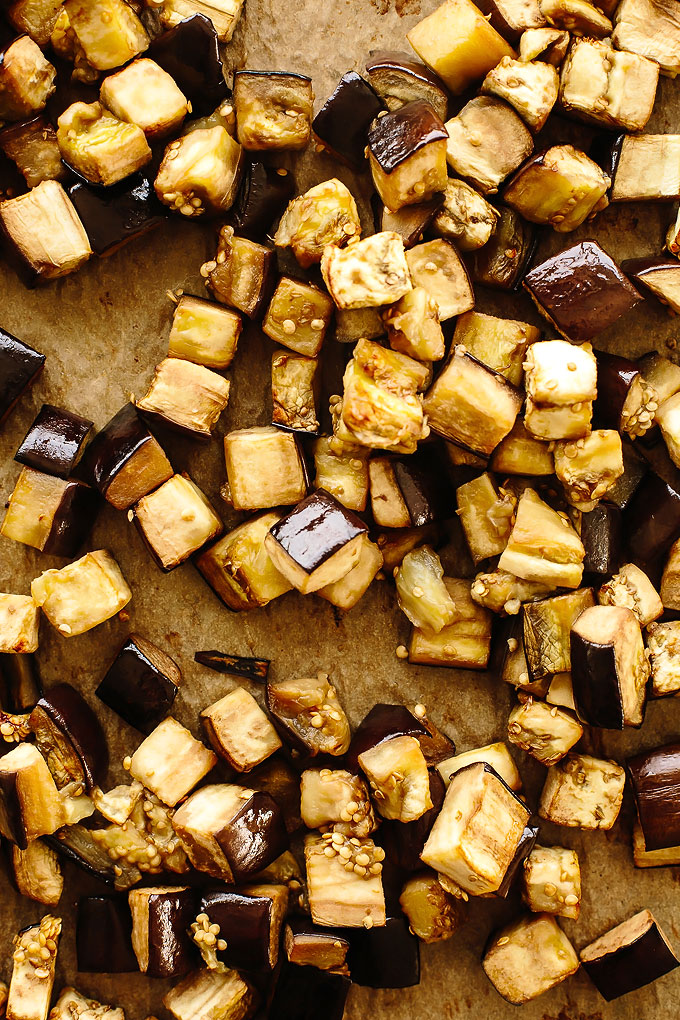 While the eggplant roasts, prepare the sauce.

Simmer minced garlic, rice vinegar, tamari, sesame oil, and maple syrup together for a few minutes, or until the garlic begins to soften and the sauce reduces ever so slightly.

Pour the sauce over the eggplant cubes, toss to coat, and generously sprinkle with fresh cilantro and sesame seeds. 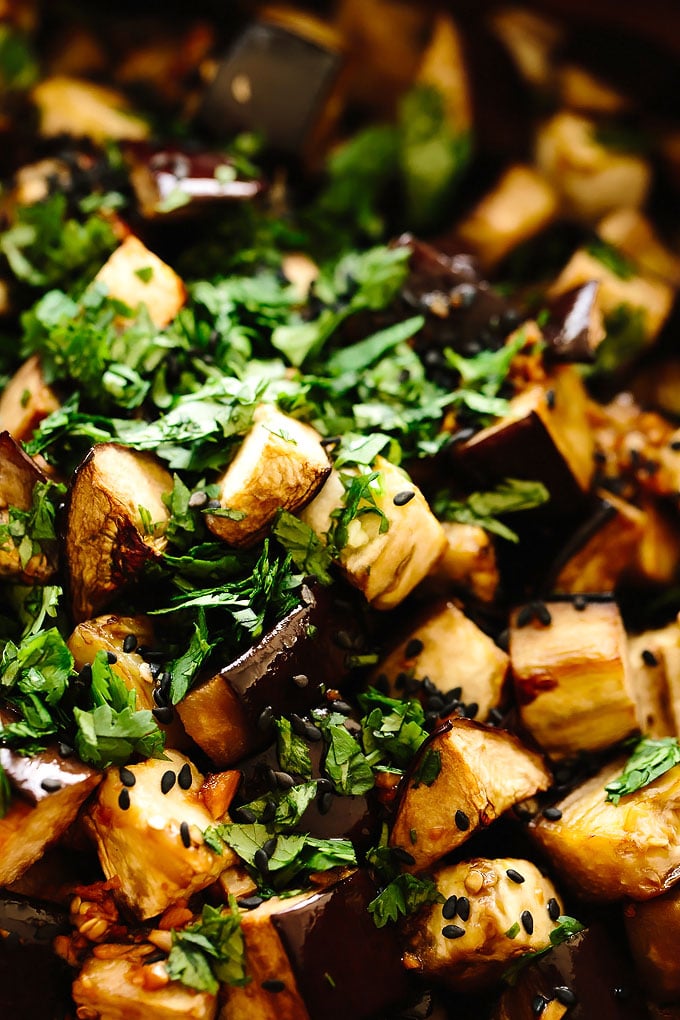 This simple sesame eggplant is delicious served warm or cold and makes an excellent side dish to a variety of meals. If you'd like to serve it as an entree, I recommend pairing it with a bit of warm brown rice or quinoa.

I hope you enjoy this recipe as much as I do. Happy cooking! 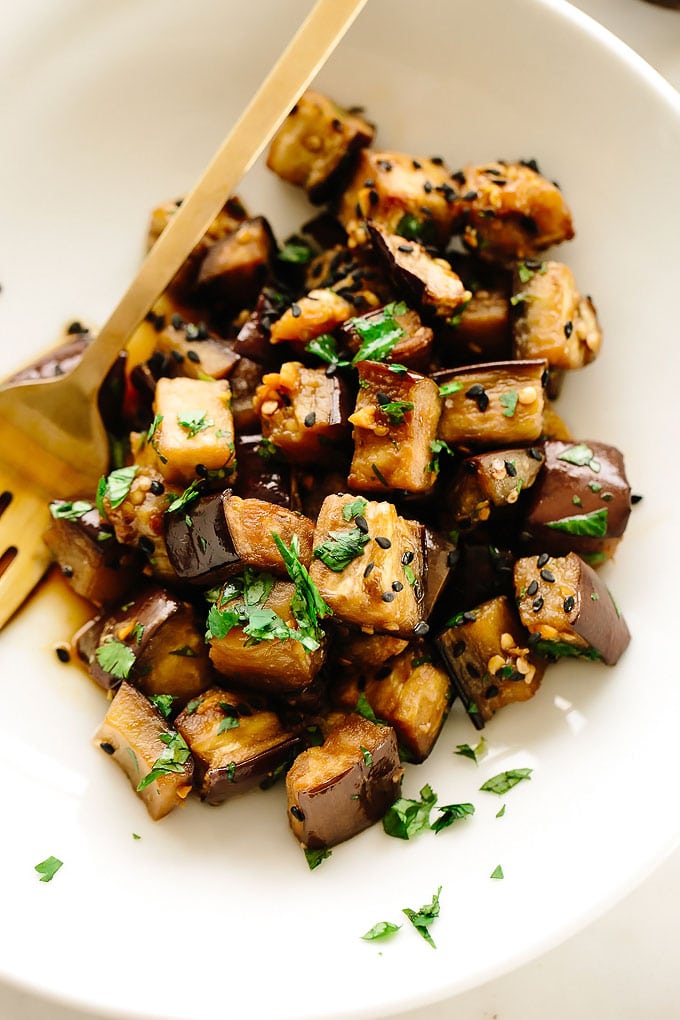 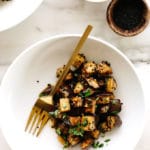 This roasted sesame-garlic eggplant is a simple, flavor-packed side dish that's sure to wow a crowd. Cubed eggplant is roasted until tender and caramelized and then tossed in sweet and tangy sesame-garlic sauce. A finishing sprinkle of fresh cilantro and sesame seeds adds a pop of color and tiny crunch.
Course Side Dish
Cuisine Gluten-Free, Grain-Free, plant-based, Vegan
Prep Time 10 minutes
Cook Time 25 minutes
Total Time 35 minutes
Servings 4
Author Ashley