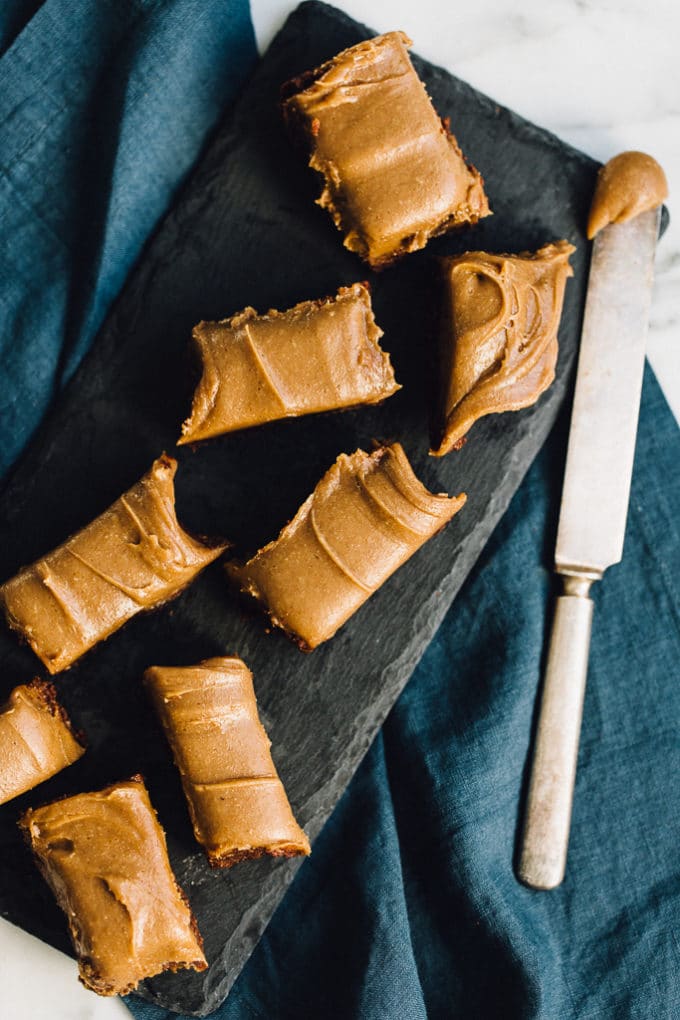 Fit for a holiday celebration. 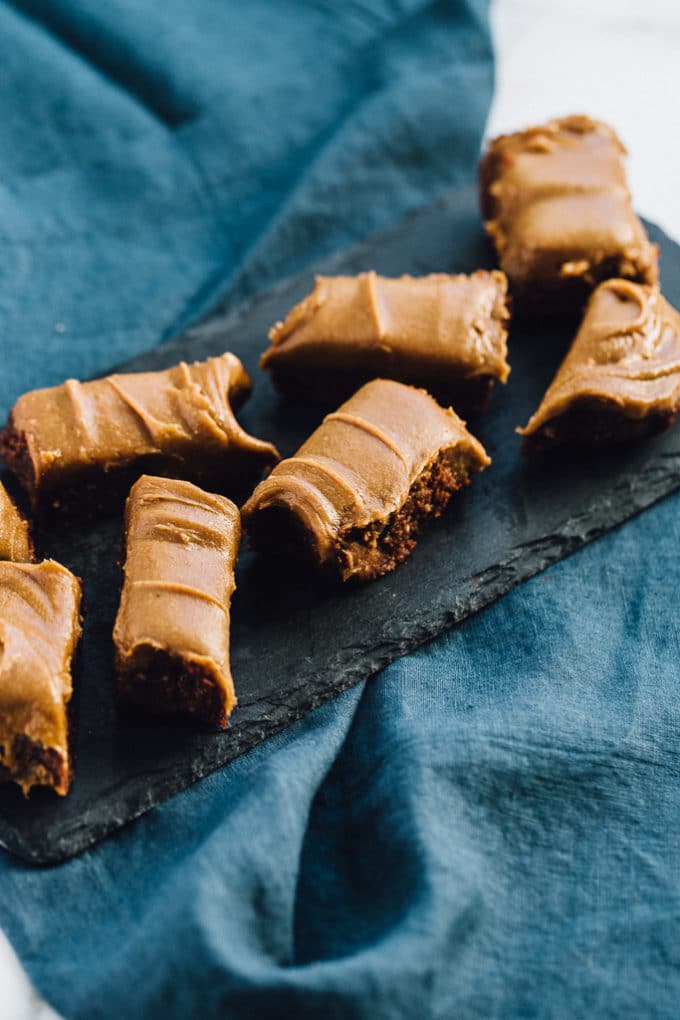 Oh, how I miss this space. It feels like it's been months since I've shared one of my own recipes with you. In reality, it's only been two weeks, but there is such intensity to the book work at the moment that each day feels more like two.

This week's big news -- other than my beautiful, talented, and lively mom turning 6-0 on Monday ♥ -- is that I wrapped up the photography for the book last weekend. I still have to edit half of those photos, and there is still a whole lot to do on the book itself before my due date in 3 weeks. BUT... the photography was a massive project and far more challenging that I initially anticipated, so my shoulders are feeling a bit lighter these days.

In total, I photographed 125 recipes, and it took me 8 months to get the job done. That probably seems like a leisurely pace, but I can assure you it wasn't! At least not for me. It felt a bit more leisurely during the summer months when I could stick to 8 (give or take a few) book recipes per week on top of 3+ blog recipes per week, but it feels like I've been hustling like a mad woman since the start of the school year.

I was photographing 4 to 9 book recipes per weekend since I returned to work in mid August while also finalizing notes on the recipes as I was preparing them. Most weekends I was on my feet an average of 20 hours between Saturday and Sunday -- either in the kitchen or hovered over my photography table snapping away. When I would wrap photography work, I would often move straight into writing and editing photos with a quick yoga or sweat session somewhere in between.

95% of those weekend hours I loved and enjoyed. So much. I would start the days dancing in the kitchen and allow those good feelings to outline and brightly color my weekend hours. Those dancing moments come from the immense gratitude I have for you and this opportunity to share my recipes with you in a more permanent way. You know when you feel so full of love that it feels like your heart might burst? That's how I feel writing this book.

I touched upon it in this Instagram post, but there were 5% of those weekend hours when I felt less than enthused and just plain tired. Moments when I felt like throwing in the towel, slumping on the kitchen floor + crying, stomping on a cookie, or avoiding the work altogether. Because it would have been easier. There were a few times when my best choice was one of those options—sometimes the only way to move forward is to have a good cry or smush a baked good beneath your bare foot, right? In those instances, I did my best to be gentle with myself. There's no sense in slathering shame or guilt on a smushed cookie. But most of the time I self-compassionately encouraged myself to push through even when it would have been so much easier to give up. Not because it was the obvious choice, but  because it was the difficult one.

Life is our greatest teacher if we allow it to be, and one thing I've learned over the last almost 32 years (I'm turning the big 3-2 next Friday) is that the path to fulfillment, contentment//happiness, peace, and love is rarely the easiest route -- and it's certainly not at the end of a shortcut. Rather, the path to those desired states of being is the one we often resist taking, because it's challenging, unkempt, sometimes mundane, and we're unclear where it will lead. But through the process of navigating that path and experiencing it, bit by bit, we discover more of ourselves. The good stuff, buried far beneath the surface, that we weren't even sure we had. Sometimes unwanted emotions rise up to the surface in the process, but that's perfectly normal and to be expected.

When it comes down to it, those good feelings we're always searching for aren't tucked away in a moment, a milestone, a person, or an achievement, and they're certainly not hiding in life's more tangible offerings. They're right here. Around us, in front of us, and within us. We just have to be brave enough to move beyond our comforts and walk with the winds of that stormy path rather than against them. 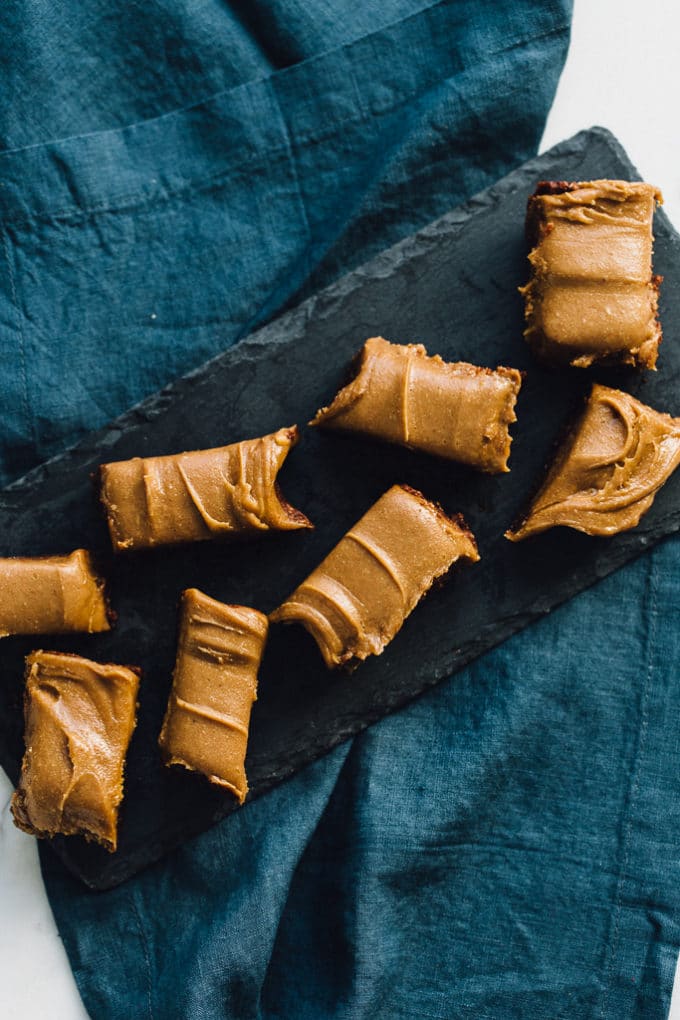 Whew. Thank you for listening to my long-winded ways today. I clearly needed this space even more than I initially thought when I sat down to write.

With all that reading, you've probably worked up an appetite, so let's get back to that whole chocolaty, fudgy, rich brownie thing, shall we?

These raw brownies were inspired by a massive 4-pound bag of raw shelled peanuts I've had sitting around for a couple of months. I procured the bag from our local grocery store for $4 and forgot about it in the midst of book busyness. When I found it the other week, I thought of an idea to make raw peanut butter buttercream frosting that could be slathered on raw brownies. Well, the buttercream approach I took yielded a thick, almost chewy caramel-like frosting that I ended up loving more than the buttercream idea. And so here you have it.

I know not everyone loves the flavor of raw peanuts -- they offer an earthier, subtly nutty flavor rather than a bold, in-your-face roasted nuttiness -- so you can absolutely roast the peanuts before using them in the brownie base and/or the frosting if you don't care about keeping it raw/no-bake. Honestly, you can probably use a variety of raw (or roasted) nuts // seeds for this recipe. I think sunflower seeds, almonds, hazelnuts, cashews, and walnuts would all work well. Pecans tend to be quite oily, so I'm not how they would affect texture but it might be worth a try. This recipe is pretty versatile in terms of nuts, so go nuts. Totally corny, but lemme have it since it's technically my birthday week, okay? Okay.

The  base is a pretty straightforward raw brownie with dates, raw peanuts (or other nuts), cacao, etc. all of which are pulsed together in a food processor until a dense, sticky mixture comes to be. Drop the mixture into a lined pan, compress it into a brownie and freeze it for a quick bit to set.

Meanwhile, you'll make the pb caramel frosting (if you try another nut, let me know how it goes in the comments) by processing raw peanuts in a food processor until smooth and glossy. You'll scoop the raw pb into a mixing bowl and add in powdered coconut sugar (see recipe), filtered water, vanilla beans/extract, and sea salt. Then, you'll beat the mixture for a few minutes or until it's thick, caramel-like, and glossy. At first it will resemble cookie dough but as the water reacts with the oils in the raw pb, it will take on a glossy sheen. Like so... 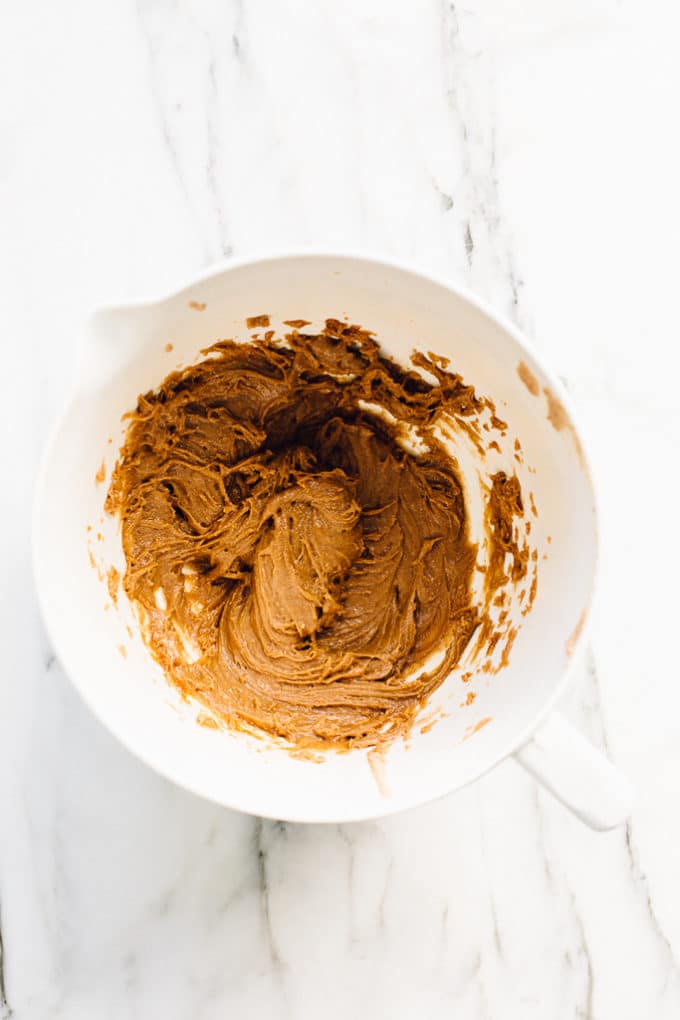 As it's written, the frosting recipe yields a very thick slather on these brownies; however, don't feel like you have to use all of it. For the photos, I used all of it, so you can assess and adjust in accordance with your frosting needs//wants//desires.

Once it's ready, slather it over the brownie base, and freeze again to set. 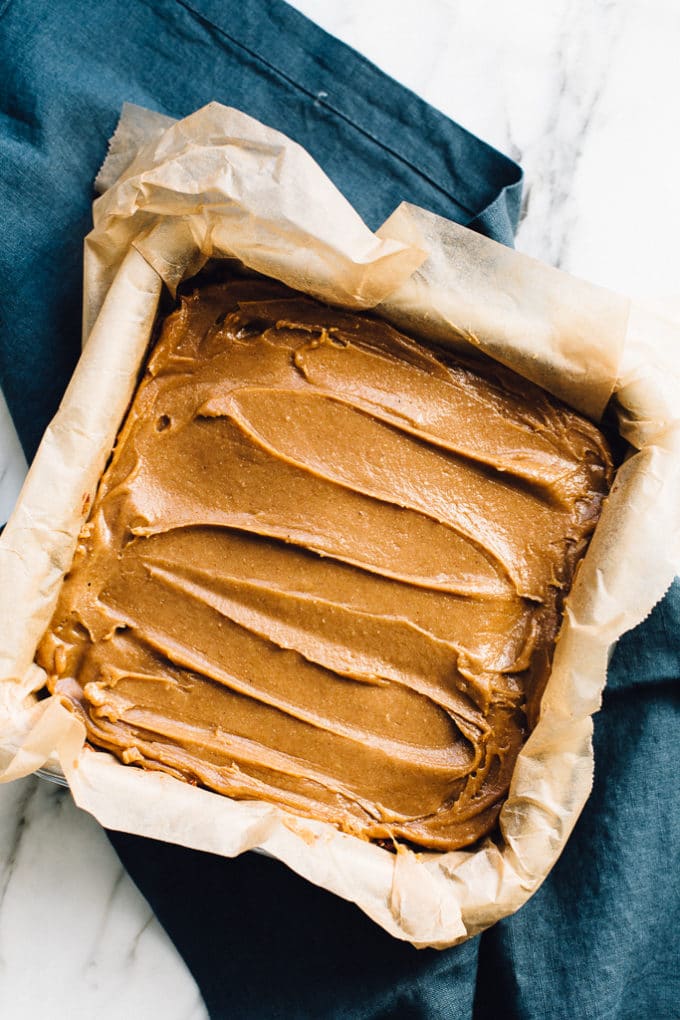 Then, slice into thin bars or 1- to 1 ½-inch square brownies. These are very decadent and rich, so a one- to two-bite brownie is perfect and this little pan goes a long way, meaning you'll have plenty to share with friends at holiday gatherings over the next couple of weeks. They also freeze well, so that's another option for extras (if you have any).

Alright, get slathering and have a wonderful weekend! Xo. 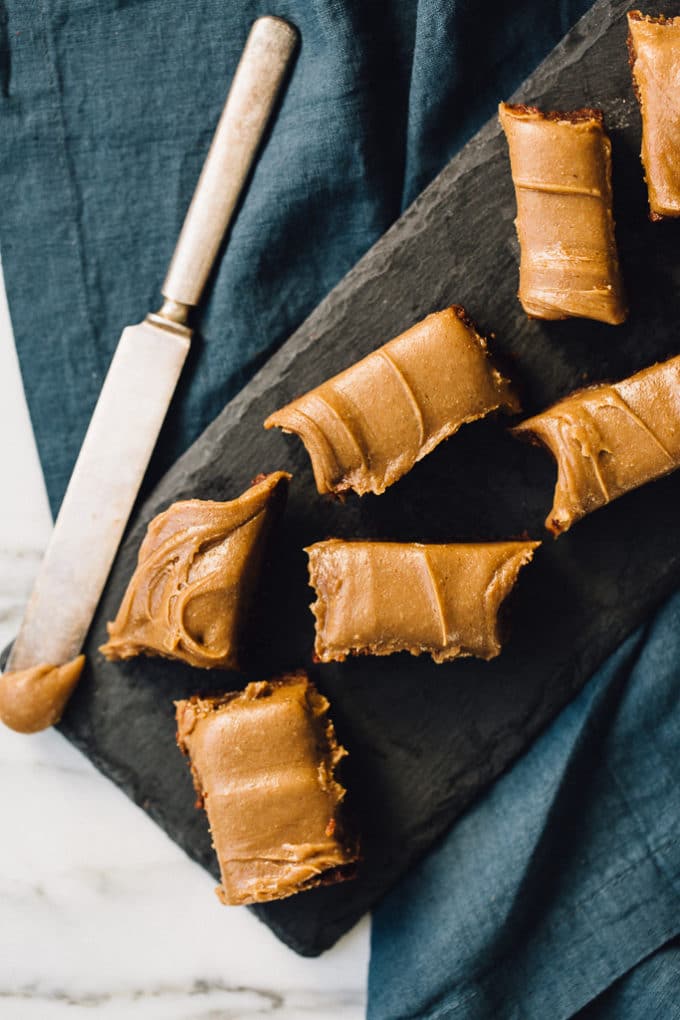 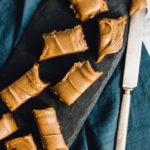 These raw brownies are made with a base of dates, raw peanuts (or other nuts), cacao, vanilla, and sea salt. Everything gets pulsed together in a food processor until a dense, sticky mixture comes to be. Then, it's compressed into a brownie and frozen for a bit to set. While the brownie base chills, you'll make the pb caramel frosting by processing raw peanuts in a food processor until smooth and glossy. Scoop the raw pb into a mixing bowl and add in powdered coconut sugar (see recipe), filtered water, vanilla beans/extract, and sea salt. Then, beat the mixture for a few minutes or until it's thick, caramel-like, and glossy. At first it will resemble cookie dough but as the water reacts with the oils in the raw pb, it will take on a glossy sheen. Slather that rich PB frosting over the brownies, slice, and enjoy!
Course Dessert
Prep Time 25 minutes
Total Time 25 minutes
Servings 20 to 32 two-bite brownies