You are here Home » Raw Blueberry and Kiwi Tart

This vegan raw blueberry and kiwi tart is as fun to look at as it is to eat! A simple almond-date crust is filled with a delicious cinnamon-cashew cream and topped with eye-catching concentric circles of fruit. 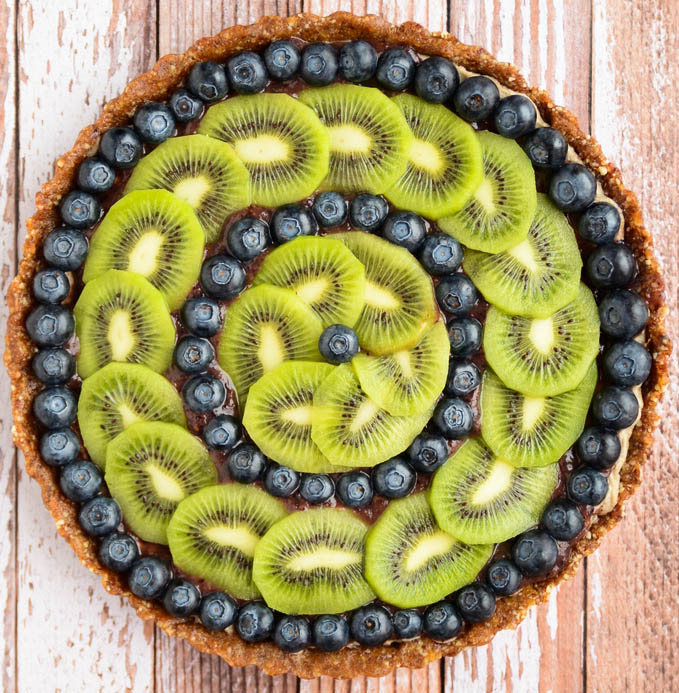 I hope you all had a beautiful weekend! Ours was spent working, blogging, and getting things done around the house, but we made plenty of time to eat this tart. Actually, we made time to enjoy it on four separate occasions. But who's counting?

I've concluded that the tart's target-like design threw us into a deep trance. One slice is never enough, you must eat more tart. You must eat all of the tart.

In all seriousness though, this blueberry kiwi tart is incredibly tasty and deserves your attention for not just one but two or three slices. Three's a charm in life and in tart consumption. 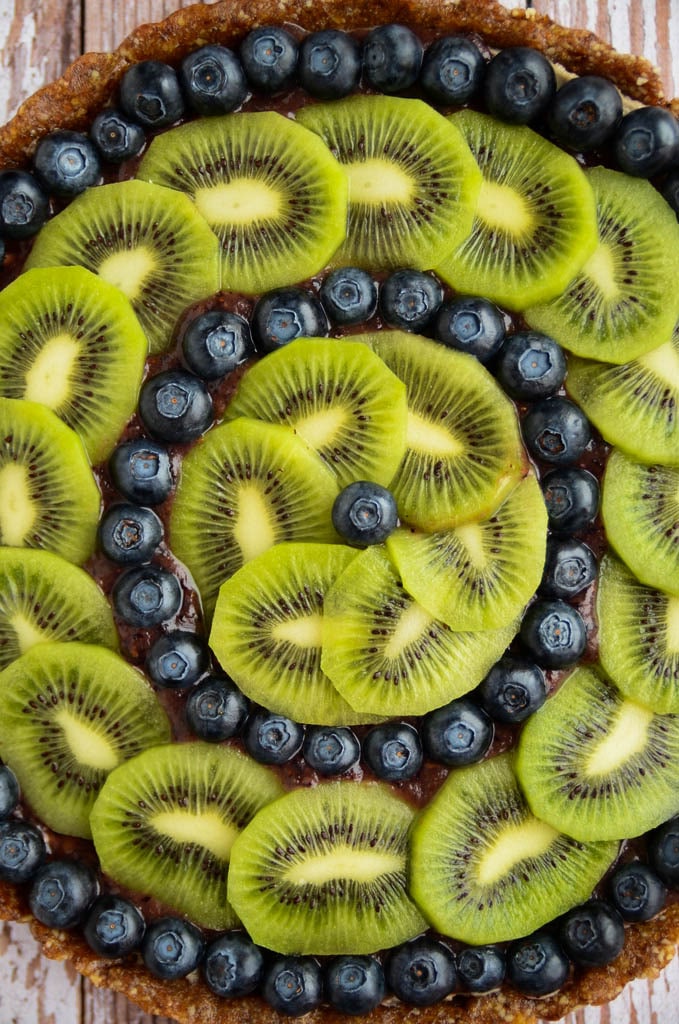 This fruit tart is both delectable and packed to its crinkled edges with nutrients and good-for-you ingredients.

The crust is made from a combination of raw almonds, dates, vanilla bean, cinnamon, and nutmeg, which creates an ultra-gooey, dense, and delicious tart base that elegantly nuzzles each topping layer within its nutty embrace.

The crust is then filled with a banana-cashew cream that adds a sweet richness to balance and tame the acidity from the fruits.

The next layer is a kiwi-blueberry glaze that gets spread over the banana-cashew cream to add a brightness and a touch of tang.

The final layer is a symmetrical arrangement of kiwis and blueberries, which adds eye-appeal and a dash of glam.

Despite having multiple steps and layers, this tart is surprisingly simple to make, and I promise it will be worth all that methodical berry placement! 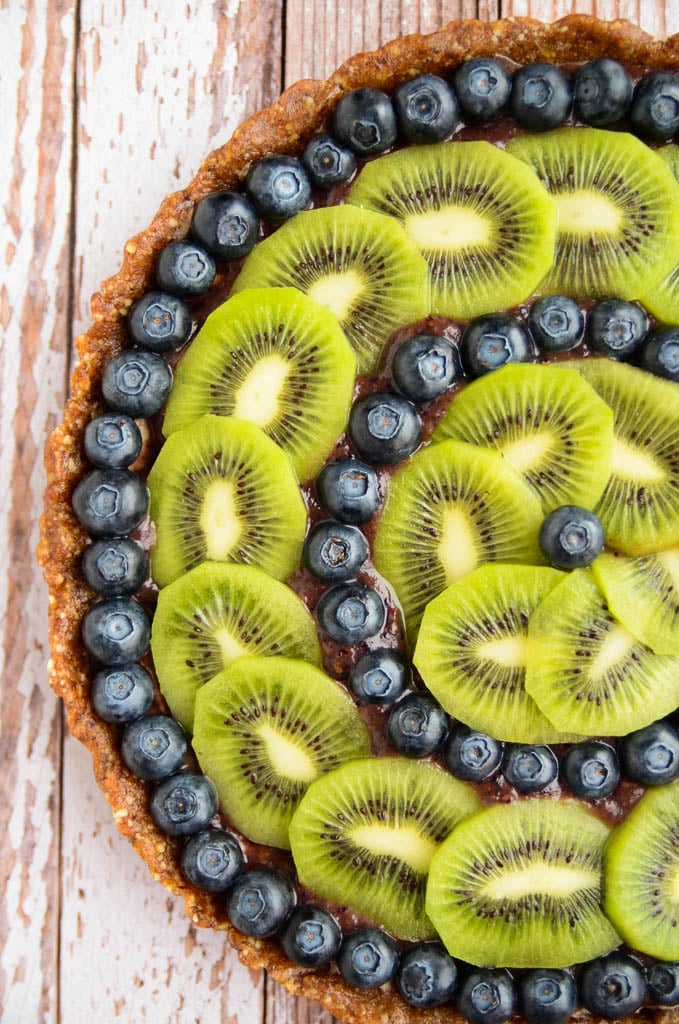 To make this vegan fruit tart, you'll start by making the crust. Add raw almonds to a food processor along with medjool dates, cinnamon, vanilla bean, and a pinch of nutmeg. Then, process until ground into a sticky meal.

Line a round tart pan with parchment paper, and press the crust mixture into the bottom and up the sides. Then, freeze the crust for 30 minutes to set it.

While the crust is chilling, prepare the banana-cashew filling. Add soaked raw cashews, banana, dates, cinnamon, and lemon juice to a food processor and process until completely smooth.

Pour the cream into the tart shell, and freeze for 10 minutes to set.

While that layer sets, prepare the glaze. Add two kiwis, half cup of blueberries, and four dates to a high-speed blender. Blend until a smooth glaze forms. Then, pour the glaze over the cream layer.

Finally, arrange blueberries and sliced kiwis on the surface of the tart, forming concentric circles. This step takes a bit of time, but really pays off in the end!

I like to return the finished tart to the freezer for at least 15 minutes before slicing and serving, but you can serve it straight away in a pinch. 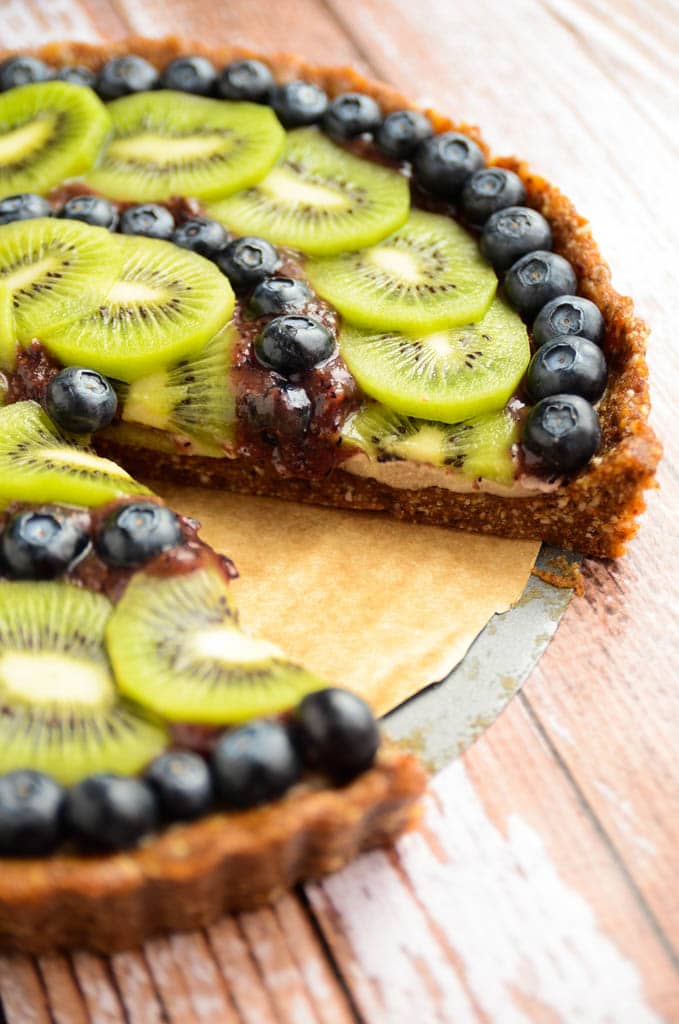 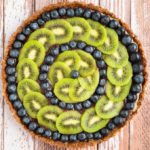