This vegan rainbow pepper peanut slaw is just as fun to look at as it is to eat. Heaps of julienned bell peppers, carrots, and cabbage + chopped cilantro + a thick, nutty peanut-sesame dressing yield a side salad that'll make you want to forgo the main course. 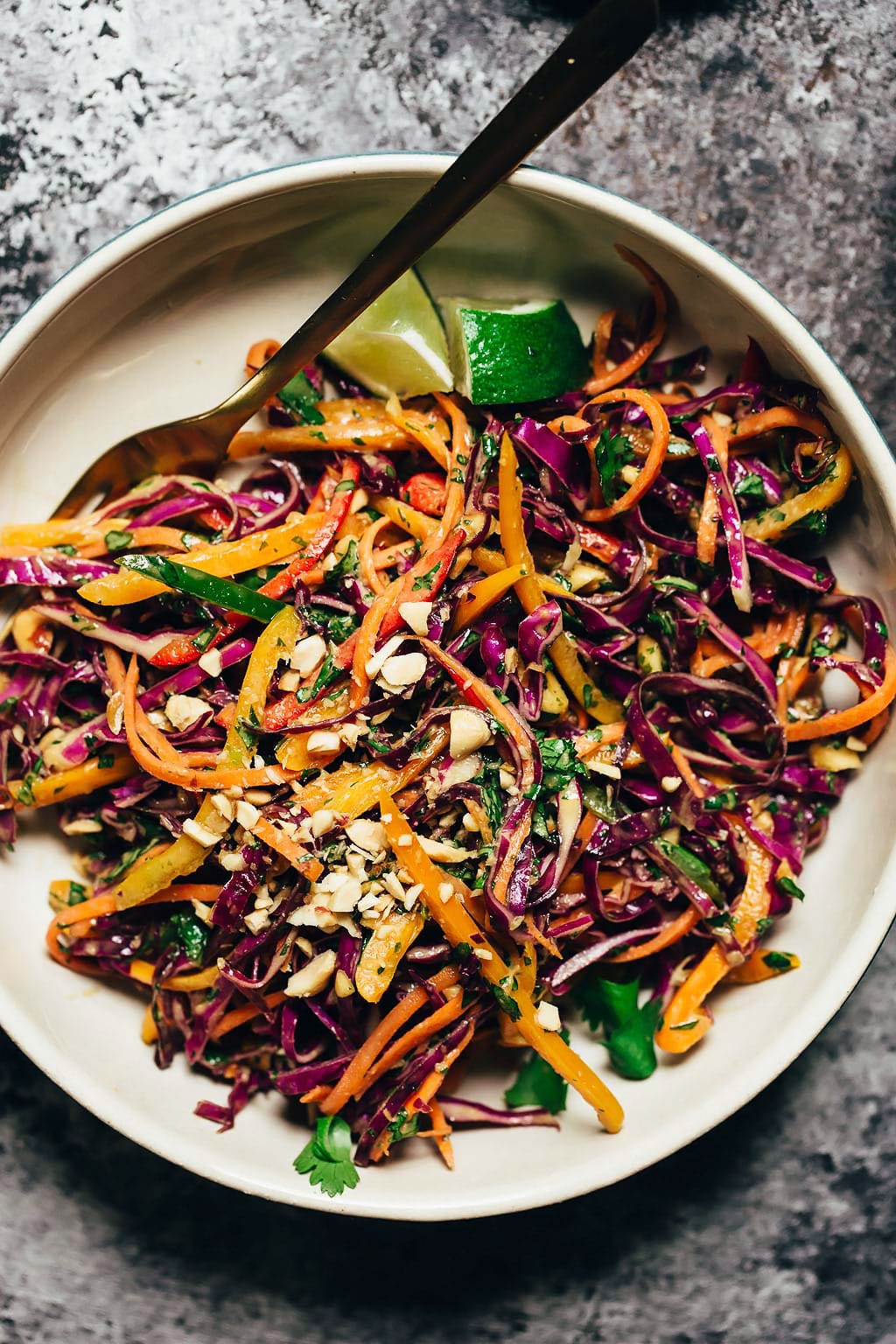 We're currently headed up to Michigan for a long weekend vacation with my family.

If you're reading this the day it posts, please send positive thoughts for a peaceful (and safe) six-hour car ride with a toddler. Sloane hasn't been a big fan of the car lately, so we've been a little nervous about this road trip.

Any moms or dads out there have tips for road trips with little ones? Sloane's just about 18 months, and she's an on-the-go kind of gal. Buzzing from one activity to the next. Her current loves are stickers, collecting pinecones, blowing bubbles, sidewalk chalk, and swinging in the swing. Sadly, stickers are the only one of those activities that's travel-friendly, so we're going to have to get creative.

Speaking of creative, I thought it'd be fun to poll you all on Instagram Stories to see which recipe you wanted me to post this week. It was between Strawberry Lemonade Bars and this rainbow pepper slaw, and you chose SLAW.

Which so confirms why we're friends. Because as much as I love dessert, a good nutty slaw just gets me in the summertime.

If you were on the Strawberry Lemonade Bars side of the vote, don't worry. I'll be sharing the recipe for those next Wednesday! But do promise me that you'll give this slaw a go, too. It's everything.

And can we also agree: this vegan slaw is a looker... 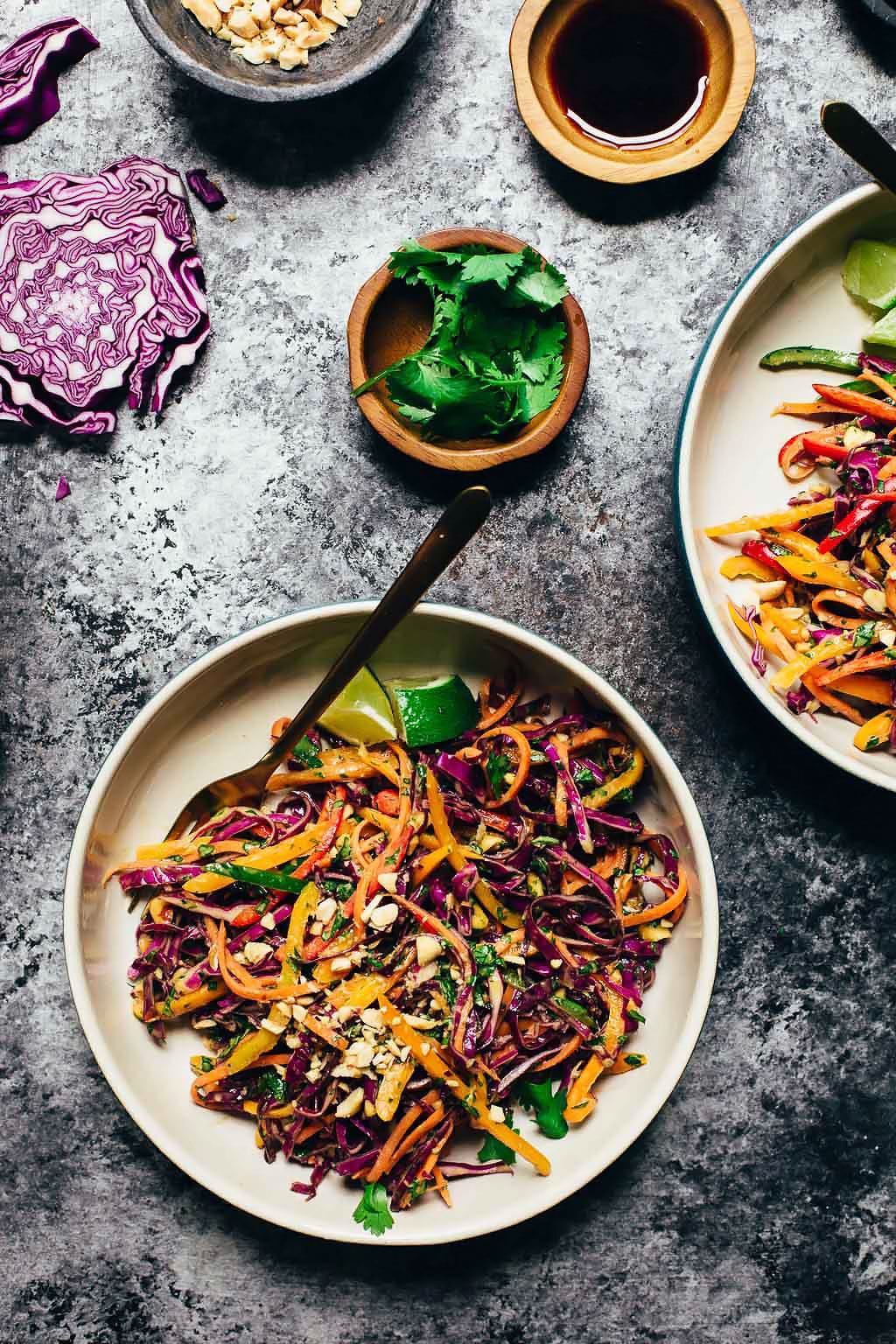 The key to making this slaw as delicious as possible is to use mini bell peppers if you can get your hands on them. Regular bell peppers will work, but they require more slicing, dicing, and coring and aren't as sweet as the mini type.

Our grocery store carries the mini bell peppers in one-pound bags, which is exactly the amount you'll need for this recipe. For the sake of color and flavor *POP*, I also add seeded and cored jalapeños to the mix. But they're optional so don't fret if you're heat-sensitive.

Keep in mind though that removing the seeds and core greatly reduces the heat. To be honest, I don't notice any kick from the jalapeños in this salad, but the flavor they add is awesome. 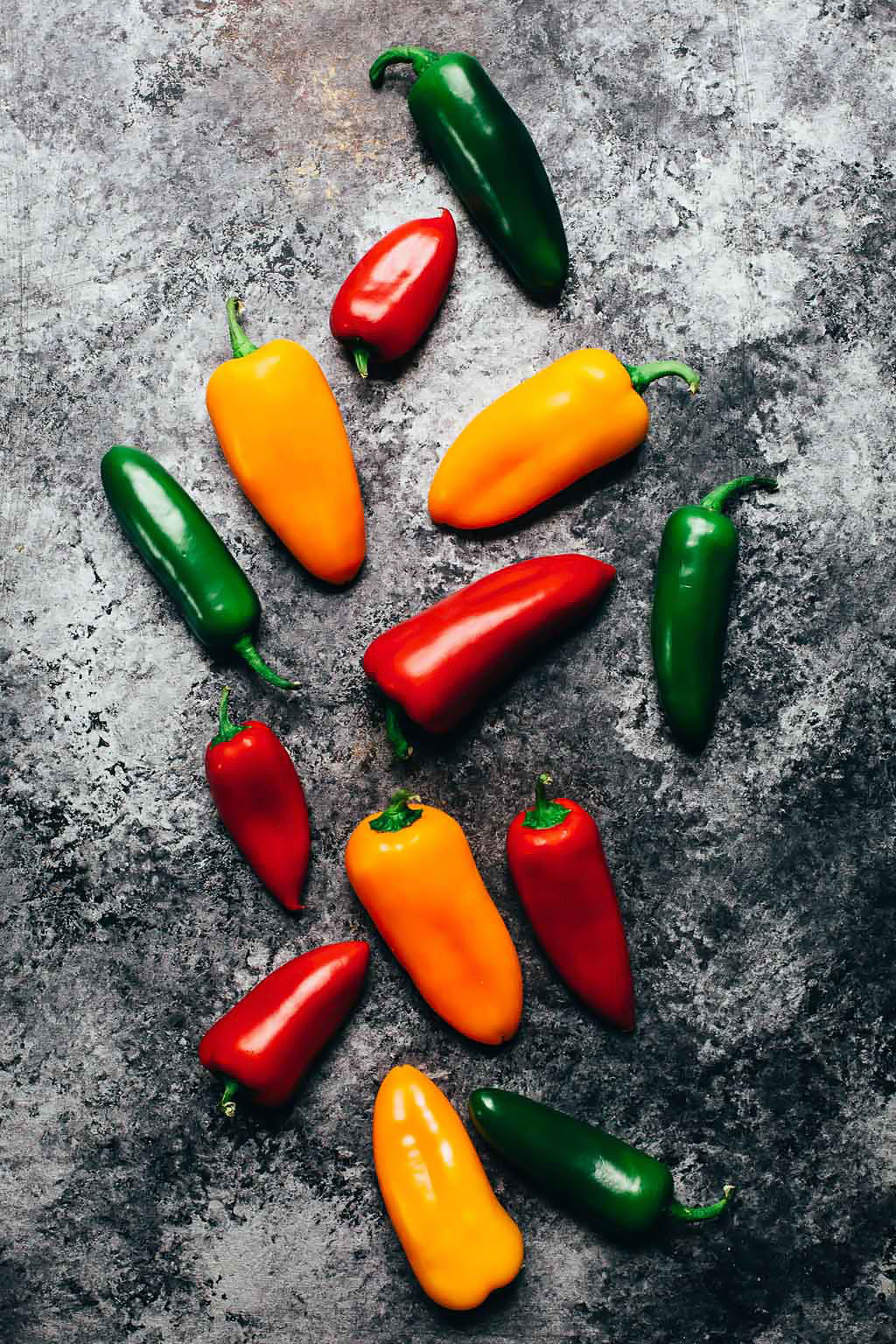 This slaw is made in three super simple steps: Chop/slice, whisk, toss.

You'll start by julienning and slicing the veggies. The thinner you can slice the vegetables, the better the slaw's texture will be.

Here, we have julienned carrots and thinly sliced mini bell peppers and jalapeños. 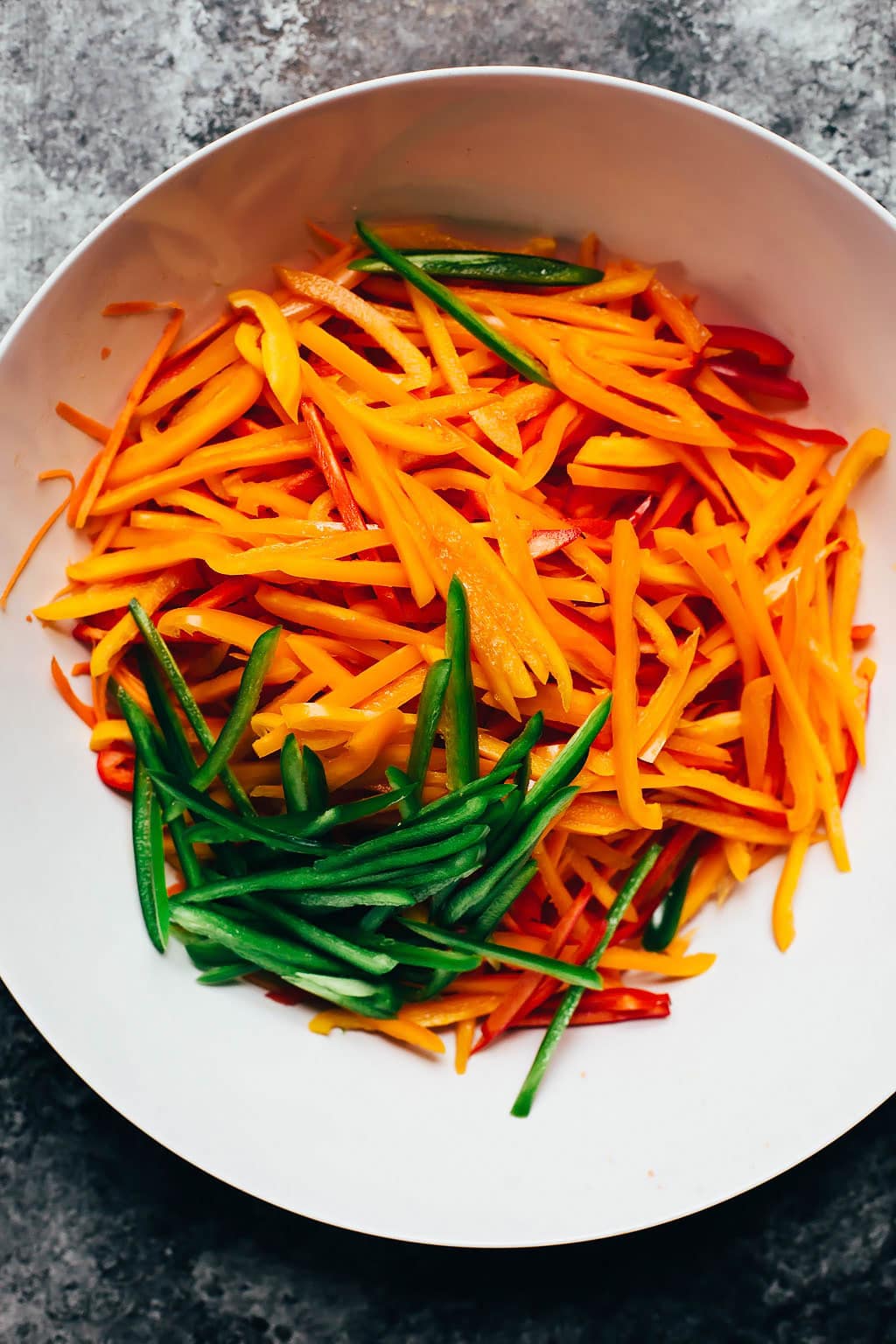 Next, you'll add a few cups of finely shredded red cabbage. Can I be honest? I've always wondered why red cabbage isn't called purple cabbage. Its vibrant amethyst hue certainly suggests the appropriateness of the latter.

Per usual, I digress.

You'll add the cabbage along with lots of fresh cilantro and chopped peanuts (or sunflower seeds for a nut-free version). 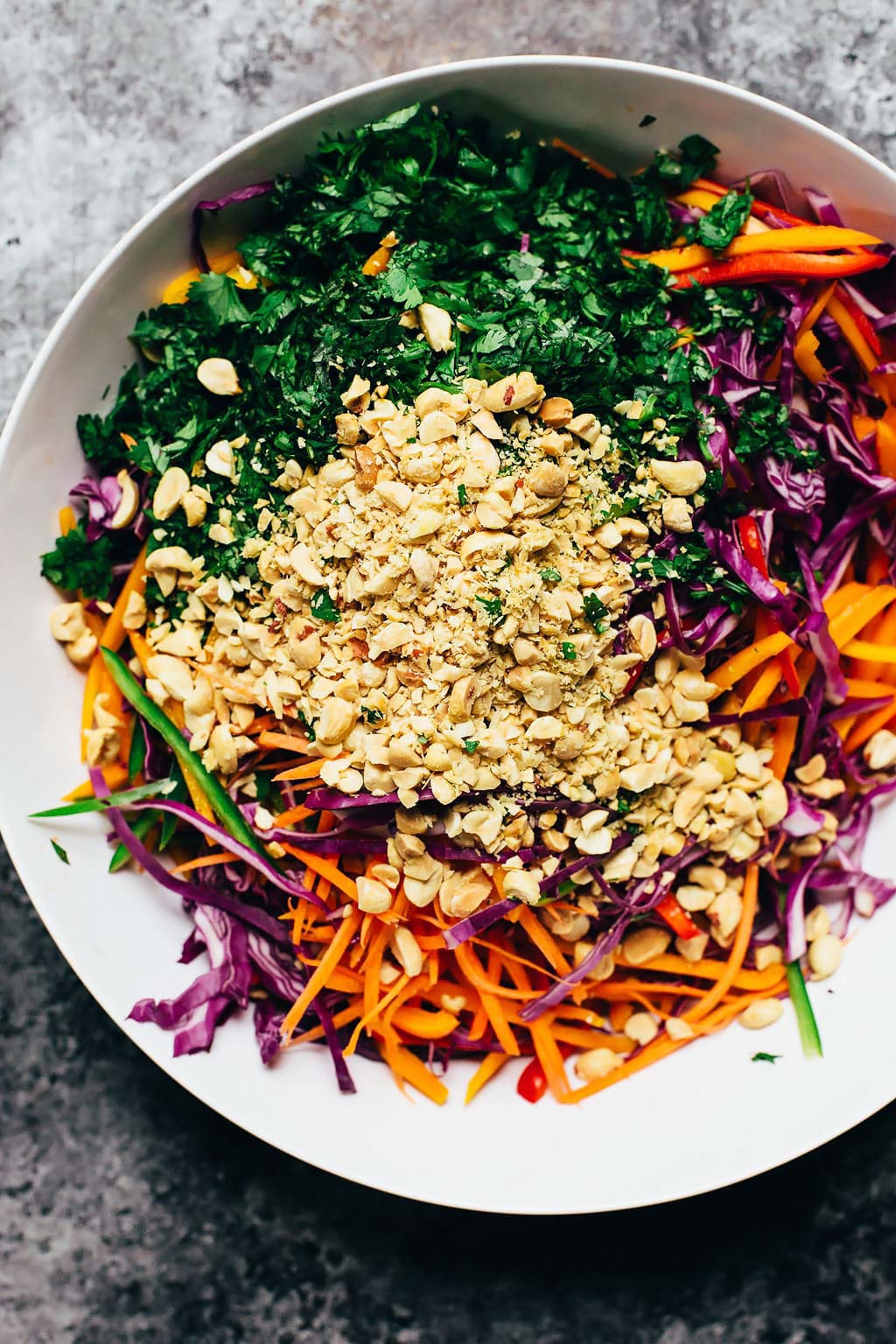 Let all those delicately sliced veggies hang out there for a bit while you get to work on the dressing.

To make the dressing, vigorously whisk together peanut butter (or sunflower butter), maple syrup, tamari (or soy sauce if you don't need to keep this recipe gluten-free), rice vinegar, and toasted sesame oil.

As you whisk, the dressing will emulsify into a thick, super smooth consistency. If you're not one for hand whisking, you can add the dressing ingredients to a blender and blend instead.

Once the dressing is ready, pour it over the slaw, and toss to coat. How good does this ↓ look? 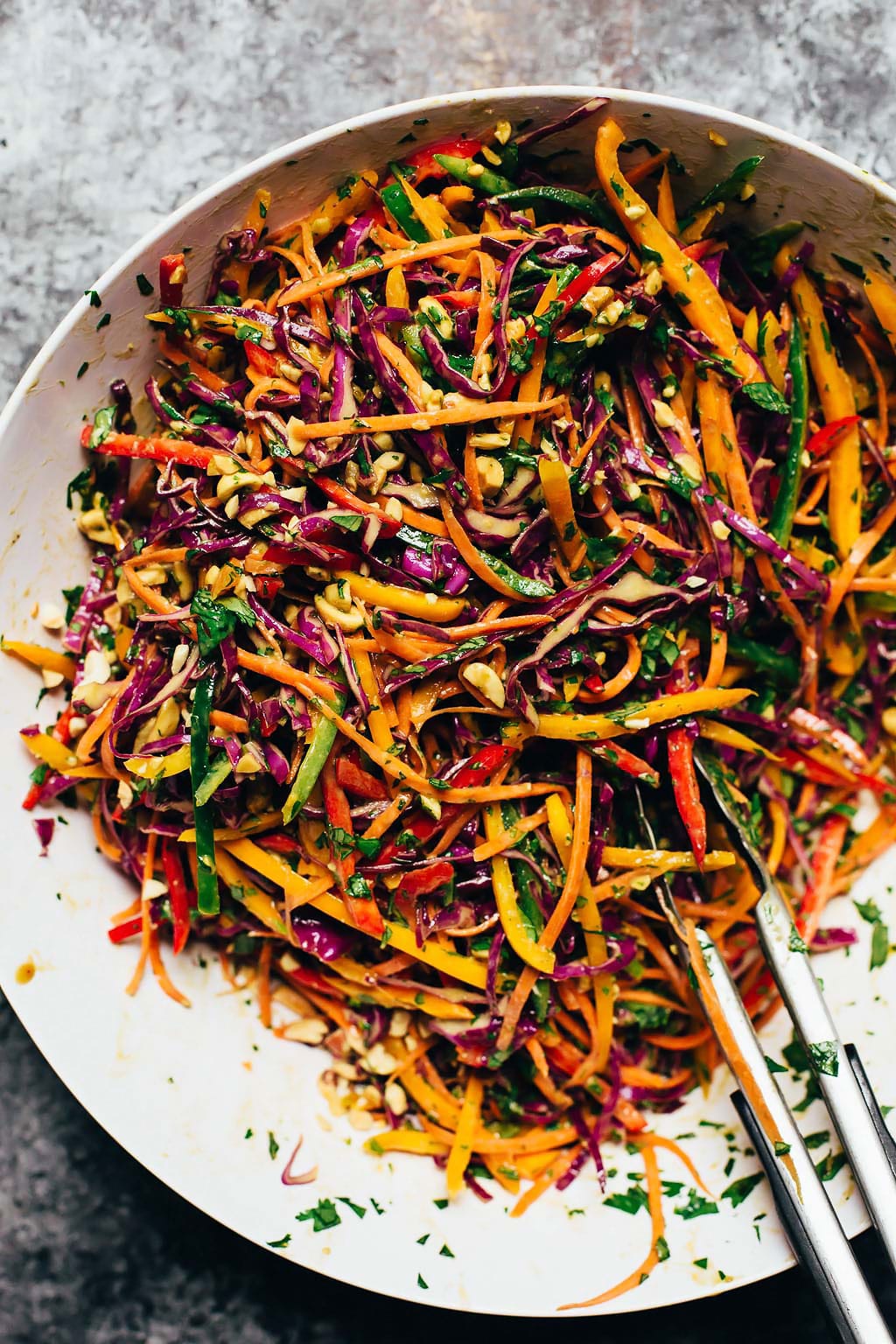 I find this slaw is best served the same day it's made, but it's more forgiving than most salads and will keep in the refrigerator for up to three days.

If you're making it for a party and want to prepare it ahead of time, prepare the veggies, peanuts, and dressing and keep them all separate and refrigerated until just before serving. Then, pour the dressing over top, add the peanuts, and toss to coat.

I hope you love this recipe as much as I do. If you make it, let me know! Leave a comment, rate it, and don't forget to tag a photo #blissfulbasil on Instagram. 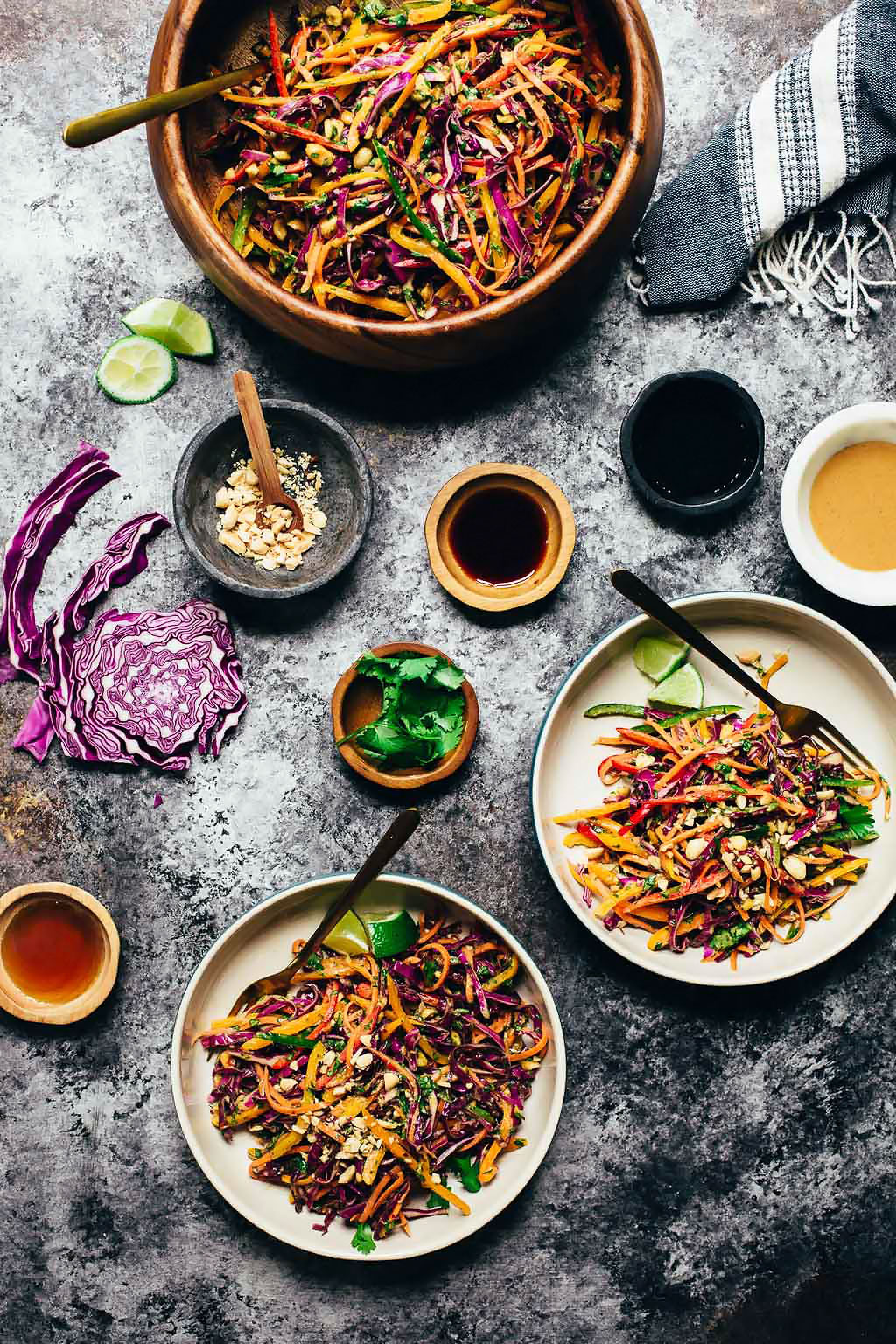 *Mini bell peppers work best for this salad as they're sweeter and crisper than regular bell peppers, but in a pinch you can substitute one pound of red, orange, and yellow bell peppers. **I use regular Tamari. If you use reduced-sodium, you'll want to increase the amount (maybe to 2 tablespoons or so). If you don't need to keep this recipe gluten-free, you can use regular soy sauce instead of tamari. ***PREPARE AHEAD TIP: If you're making this slaw for a party and want to prepare it ahead of time, prepare the veggies, peanuts, and dressing and keep them all separate and refrigerated until just before serving. Then, pour the dressing over top, add the peanuts, and toss to coat.