This hot pepper pot vegan cultured cashew cream cheese is incredibly simple to make and packed with all the beloved tanginess of the "real" thing. Made with just three ingredients (plus water and sea salt), this homemade vegan cream cheese is sure to please dairy lovers and vegans alike! 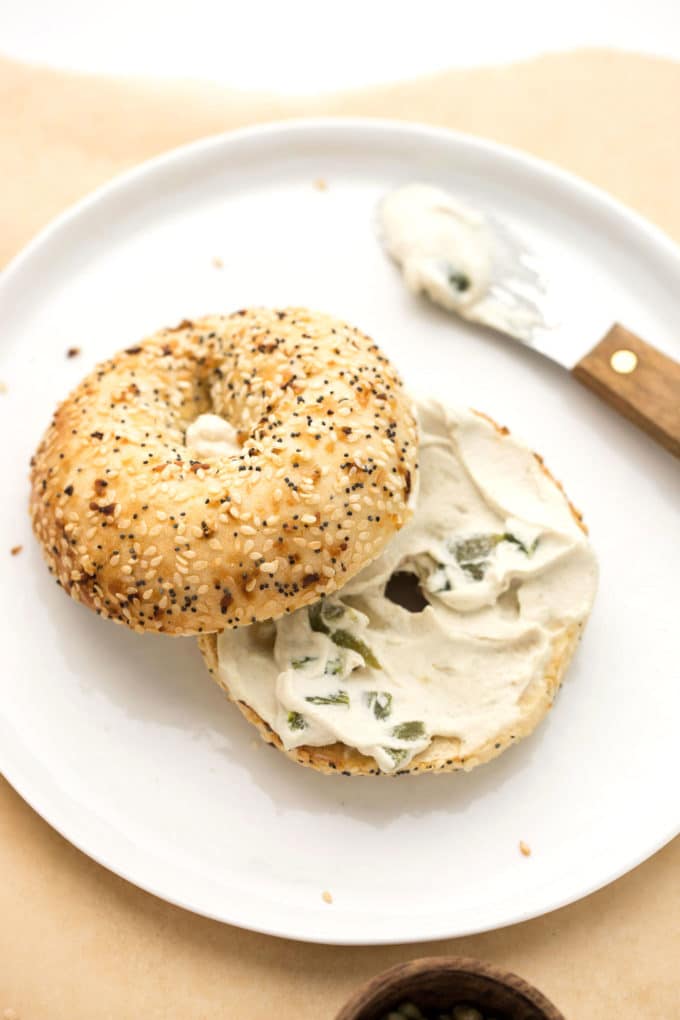 There's a quaint coffee shop not too far from our condo that Dan and I like to walk to on Saturdays. Its name—Beans & Bagels—is perfectly descriptive given that the cozy café specializes in homemade bagels and flavor-forward coffee brews.

I typically stick to a chai latté with soy milk + a sesame bagel with a generous smear of hummus.

Dan, on the other hand, is a cold brew + salt and poppy bagel kind of guy. He's not one to pick favorites with cream cheese though, so his choice usually varies from week to week.

That being said, lately he's been on a Hot Pepper Pot cream cheese kick. Hot Pepper Pot—is that not the cutest name for jalapeño cream cheese? He's been raving about the stuff for the last several weeks and has been begging me to create a vegan version so that we can enjoy it at home.

For weeks, I'd planned to try my hand at the whole culturing thing, but I was majorly intimidated. I'm telling you, no matter how many blog recipes I've written (over 500 at this point) and despite the fact that I wrote a cookbook, certain recipe concepts still elicit the kitchen jitters.

I recently came to the conclusion that these kitchen fears probably fall under the umbrella of "resistance" that Steven Pressfield references throughout his brilliant book The War of Art. As he so gracefully articulates, "The more important an activity is to your soul's evolution, the more resistance you will feel."

Welp, apparently cultured cream cheese was so very important to my soul's evolution, because the resistance was fierce. 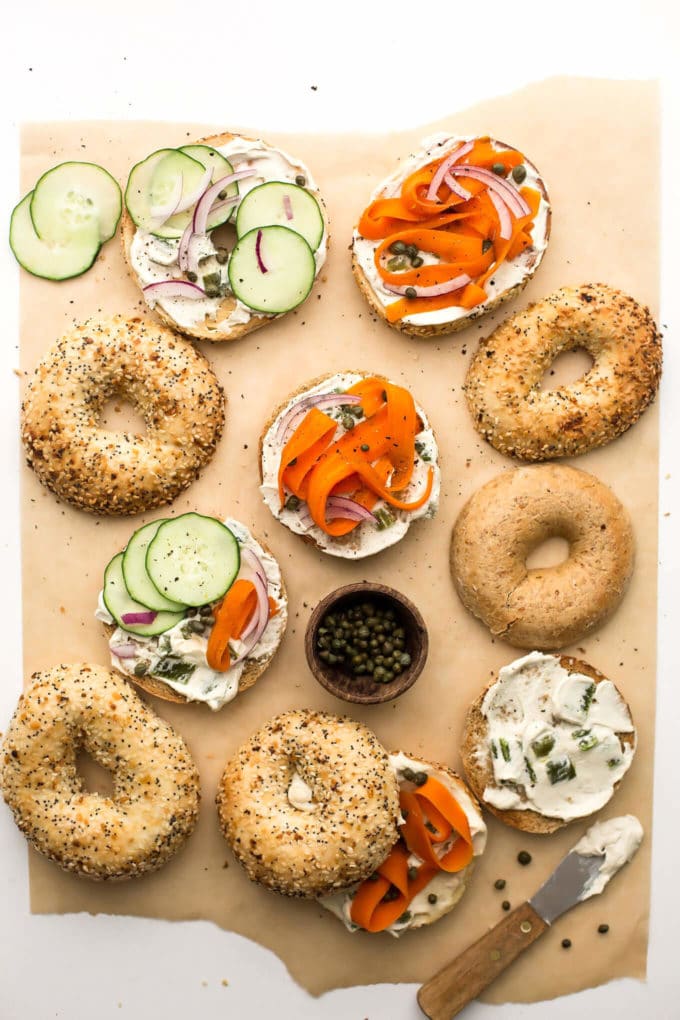 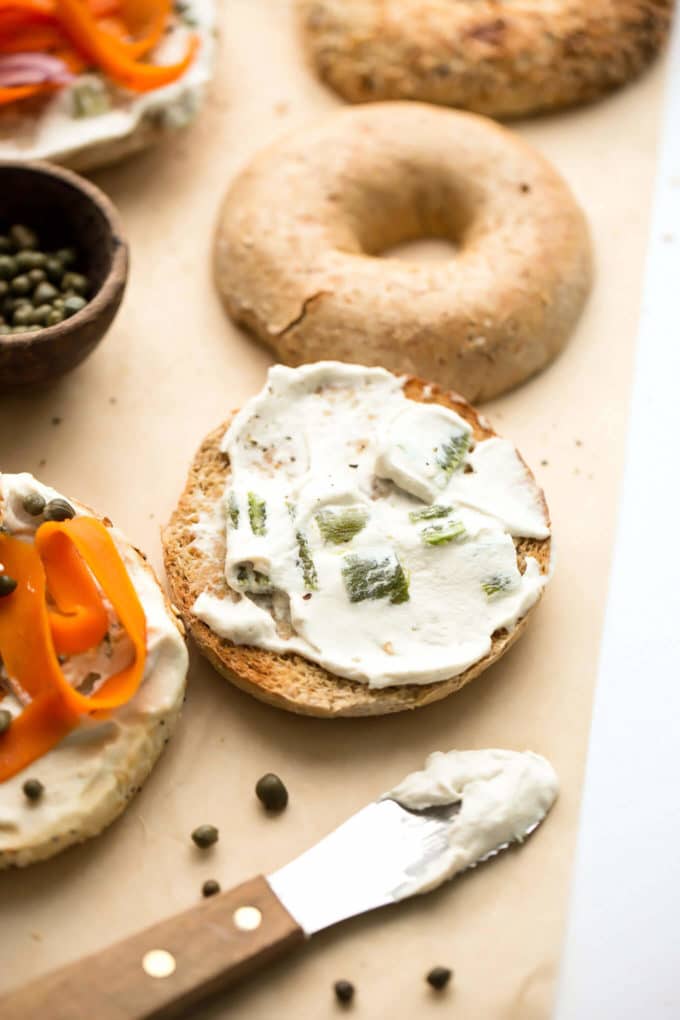 I squashed it. And I'm pretty sure my soul did evolve. Albeit in a small way.

Last week, I boldly went where I'd never gone before, and I took my raw cashews and probiotic capsules with me. Hot damn. 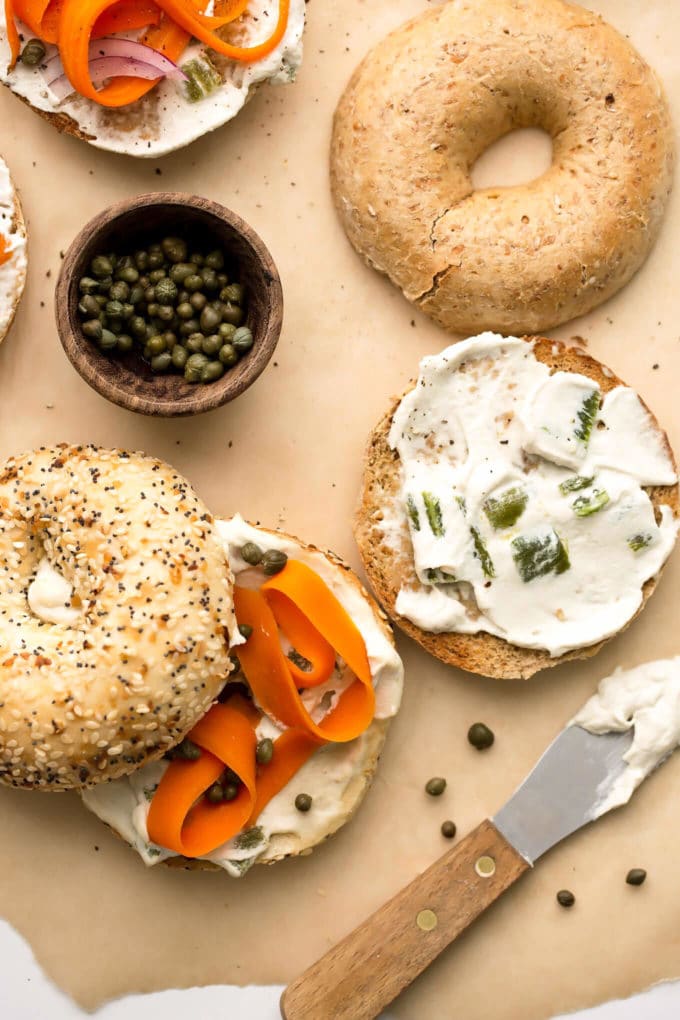 It turns out that vegan cultured cashew cream cheese is one of the easiest things to make... ever.

No, really. I swear. Cross my resistant heart.

Even better? You'll only need to spend about 20 active minutes in the kitchen. The rest of the "prep" is culturing downtime in which the probiotics work their magic to transform ordinary cashew cheese into a tangy, delightful cream cheese spread.

So, how do you make cultured cashew cream cheese? In three easy steps...

1) Add soaked raw cashews, the contents of a few probiotic capsules, and a bit of filtered water to a high-powered food processor. Give it all a lengthy, several-minute whirl until smooth, then transfer the cashew mixture to a non-reactive (i.e., non-metallic) bowl or jar.

3) Roast and dice a few jalapeños, and stir them into the cultured cream cheese along with a generous pinch of sea salt.

Having tackled this cultured vegan cream cheese adventure, I feel a bit silly having harbored all that fear. And yet it was still refreshing to bust down the stubborn walls of the ol' kitchen comfort zone. 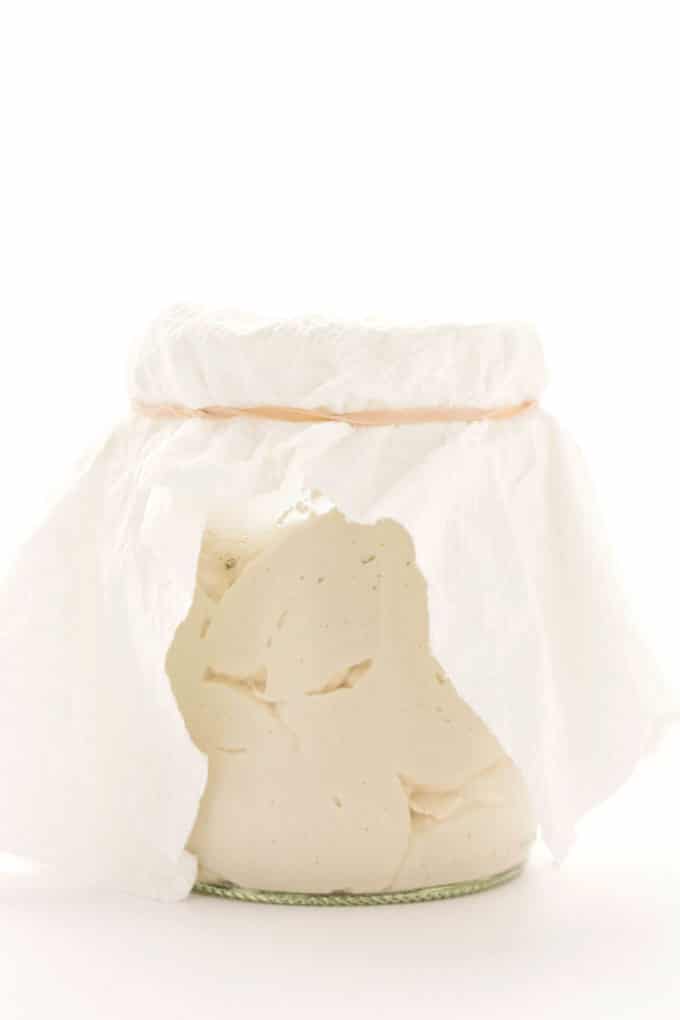 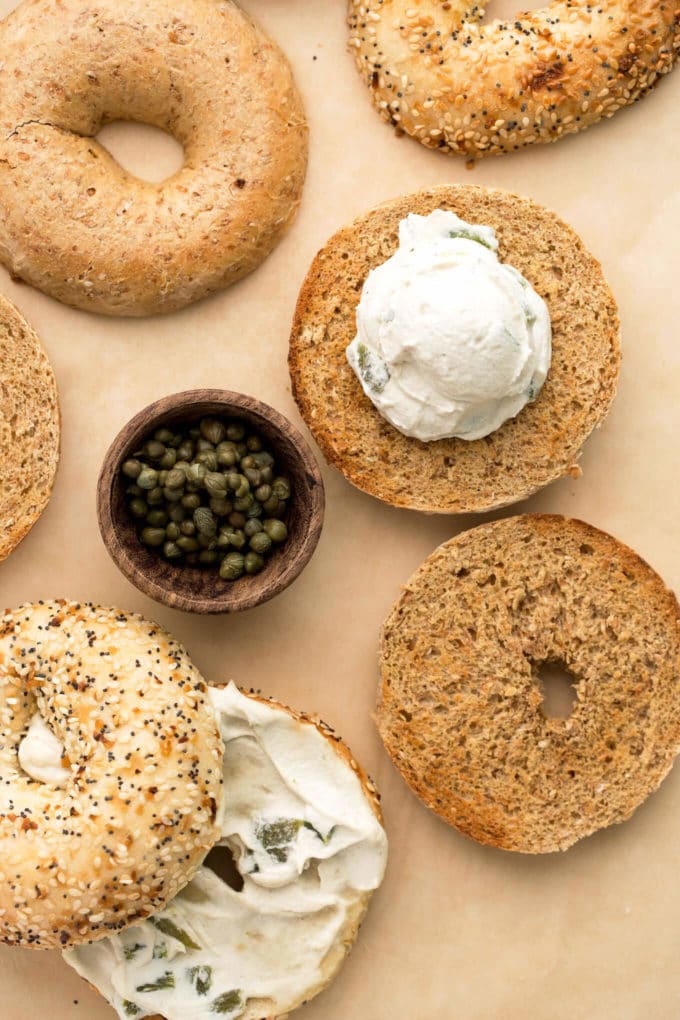 Once your hot pepper cream cheese is ready, slather that stuff on everything.

If you like what you see in the photos, here's a rundown of the goodness:

Carrot "lox" (i.e., sprinkle thinly sliced carrots with a bit of hickory smoke salt, wrap them in foil, and roast at 425F for 20 minutes).

And, of course, plenty of that tangy cream cheese. 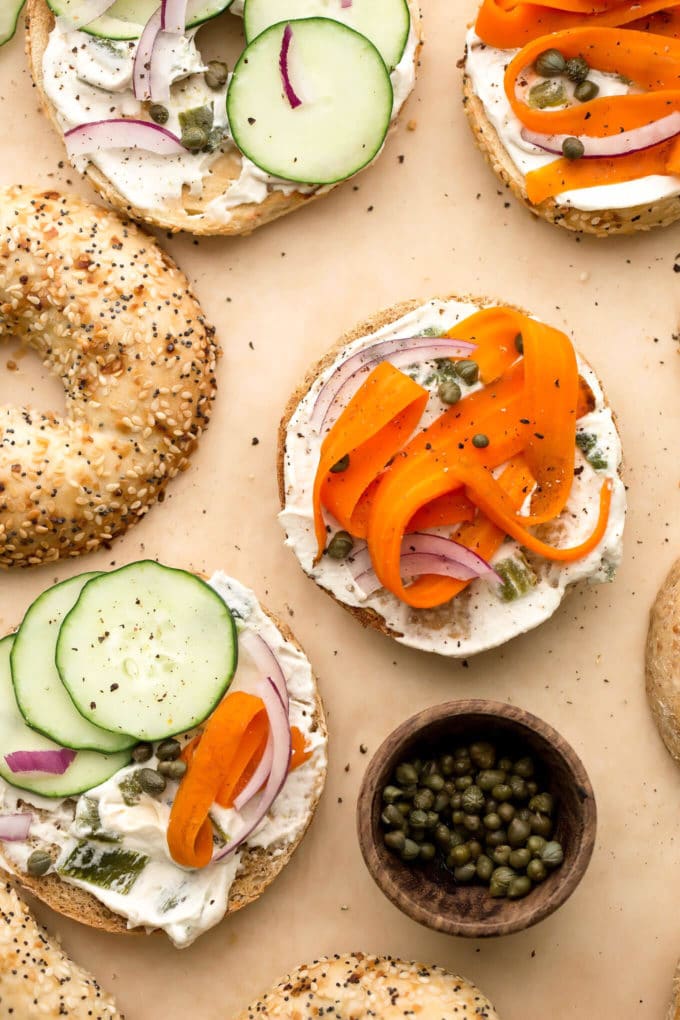 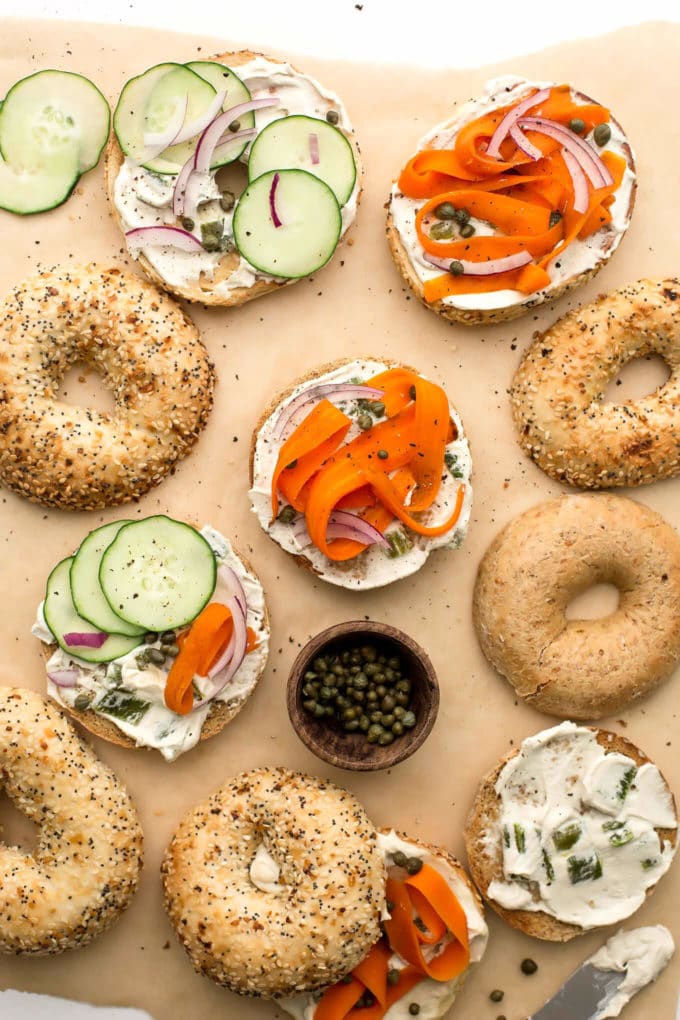 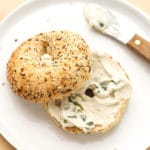 *Probiotic capsules can be found in the refrigerated section of most health food stores (e.g., Whole Foods). Ensure that the probiotic capsules you purchase are both vegetarian/vegan (i.e., do not contain milk products) and that they contain at least 1 billion active cultures per capsule. **It's important to use pure, unchlorinated water, because chlorine can disrupt and even inhibit enzyme/culturing activity. ***To make plain cream cheese, simply omit the jalapeños. ****The finished product has a light and airy texture reminiscent of whipped cream cheese (which I quite like). If you prefer a denser, firmer cream cheese, scoop the cultured cheese into cheesecloth, press out excess water, and then add the jalapeños and salt.