This fully loaded vegan cheesy baked potato soup is everything. Smooth, hearty, savory, satisfying, cheesy, and bacon-y. A base of blended potatoes and cauliflower yields an ultra-creamy texture while smoked paprika adds smokiness and depth of flavor. The finishing touch in this fully-loaded soup? A mound of crisp shiitake bacon and chives. 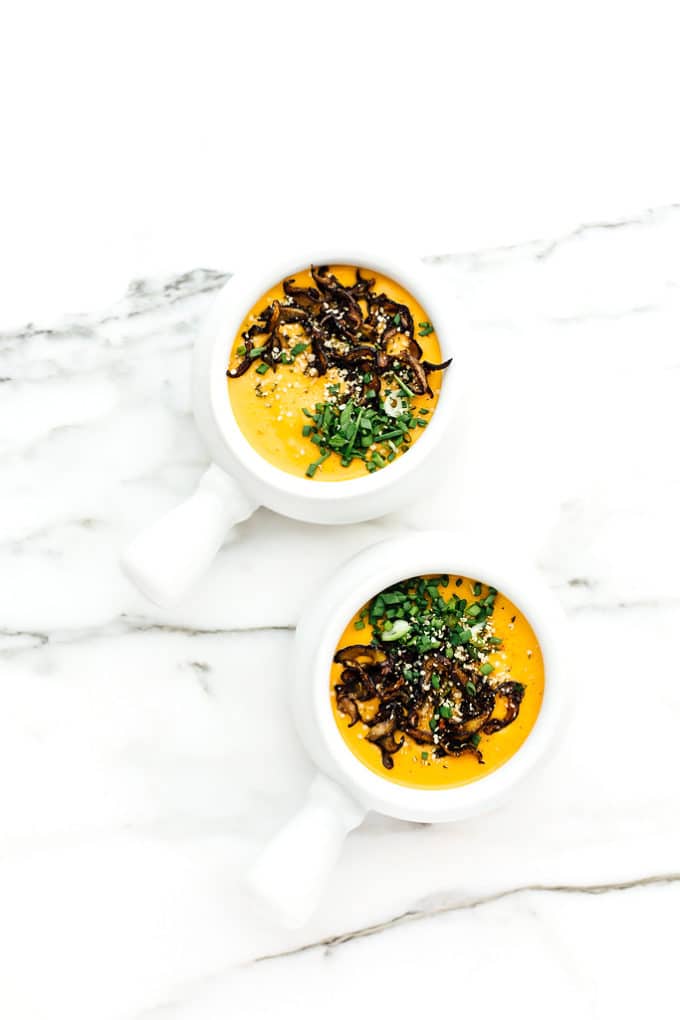 This post is sponsored by Silk. All thoughts and opinions are 100% my own.

I recently finished reading the book Do Less, Get More by Sháá Wasmund. I purchased a copy in the Amsterdam airport during a layover on our way back from South Africa last month. At first glance, I thought the book was about how to work fewer hours and reap greater material or financial gains (it's not), and I passed over it and set my sights on The Magical Art of Not Giving a F*ck. Most of us, myself included, could probably benefit from giving a few less f*cks, but something kept calling me back to that first book. My hand drifted back to the original stack of books, and I flipped the top one over and read the words printed on the back cover...

Do you put yourself under too much pressure to succeed? Are you struggling to find time for the things and people you love? It doesn't have to be this way. Anything is possible when you stop trying to do everything at the same time. 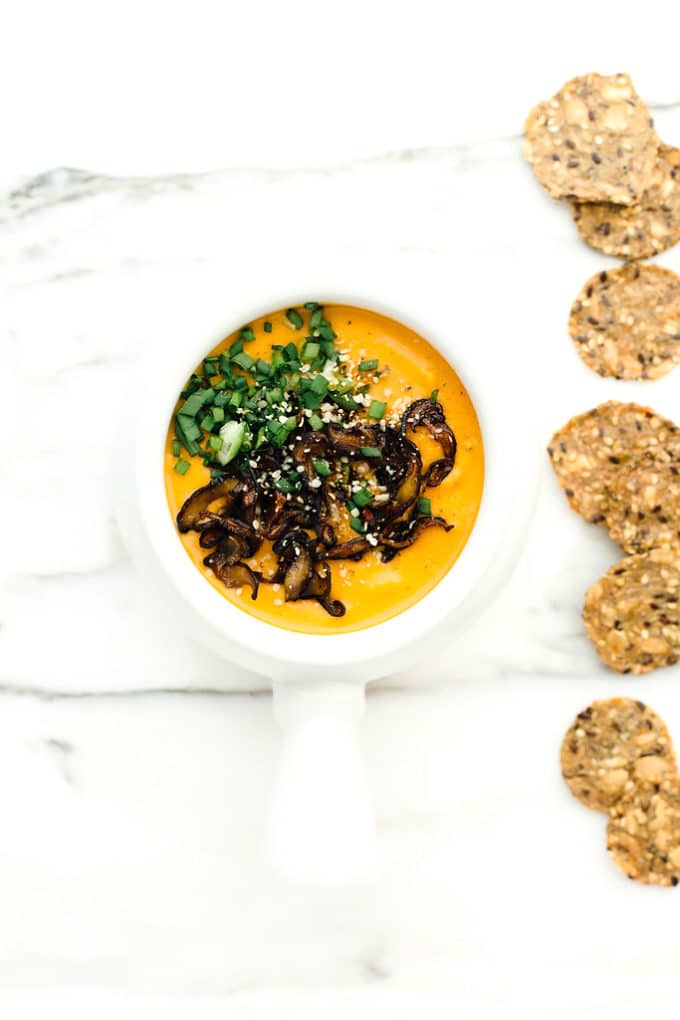 I grabbed the book and tucked into it on the flight home, eagerly underlining and annotating. As silly as it might sound, it felt as if the universe guided me to this book at just the right time.

Since I'm on leave from work this year, I figured there would be extra time to focus on new ideas/projects while effortlessly managing to dive deeper into the work I love (e.g., creating and sharing new recipes, connecting with like-minded people, beginning work on a new project, etc.). Not the case. Instead of diving deeper into the work I love, I rather naïvely decided to do everything and wear all sorts of different hats. Many weeks, I've felt like a Jack of all trades, master of none.

For example, not too long ago, I took it upon myself to attempt (key word: attempt) to re-code a portion of my site because I was having issues with images showing up slightly blurry in posts. I'm not a developer, and the closest I get to "coding" is right-clicking to "inspect element", searching for that bit of code in my css, and making small adjustments (e.g., 12 pt font increased to 14 pt font *pats back*). But whatever, I can teach myself to code while managing everything else, right? Wrong. So wrong.

Thank goodness Dan arrived home five hours later (yes, five hours!), because I might have accidentally blown up the internet if my self-instructed Coding 101 course carried on much longer. I certainly did a number on my site (if you notice any posts with images running clear off the page, then you've discovered one of my coding masterpieces). And alright, there may have been a few frustrated tears too. Dan looked at me, looked at my computer, looked back at me and said, "Whatcha doing?" Teaching myself to code. "Why?" Because. "How about hiring someone to help you with these things?" Don't be silly, I can figure it out. "But in the time it will take you to figure it out, you could be focusing on the work you love and excel at." Well, when you put it that way.

I've always been an independent worker, and I love learning new things. The flip side, of course, is that I've become quite terrible at knowing when to ask for help. Instead, I've handed over precious hours, days, and weeks muscling through tasks that are not my forté. In fact, I've spent so much time trying to teach myself how to do everything that there have been days, weeks even, when I've felt overwhelmed by even the smallest of tasks. The reality is that time is our only non-renewable resource, and life is for living not for being "busy".

Just because we can teach ourselves to do everything doesn't mean that we should, and it certainly isn't the best or the most efficient way. Forget our careers, our entire lives have more meaning when we're able to relinquish "busy" in exchange for a more balanced, purposeful approach to the way we spend the hours in our days. Time is precious, and I've learned that it's important to say "no" (unless it's a "HELL YEAH!"), and there's strength and opportunity in asking for help. We're able to offer more to ourselves, to the people we love, and to the world when we're not trying to do it all. In fact, I'm in the process of hiring a part-time assistant so that I can dive deeper (as opposed to wider) into the work I adore—be it for the blog, book, life, or a new endeavor I'm working on.

Let's be balanced instead of busy, in-the-flow instead of on-the-go, and present instead of scattered. Before we chat soup, I'll leave you with this quote...

Doing less of what you're not so great at and concentrating instead on what you are good at sets up a virtuous cycle of productivity, with the bonus of extra happiness thrown in. I'm not suggesting you ignore your weaknesses, but stop letting them take up all your time while draining your confidence. You don't have to do everything yourself. —Sháá Wasmund Do Less, Get More (p. 97) 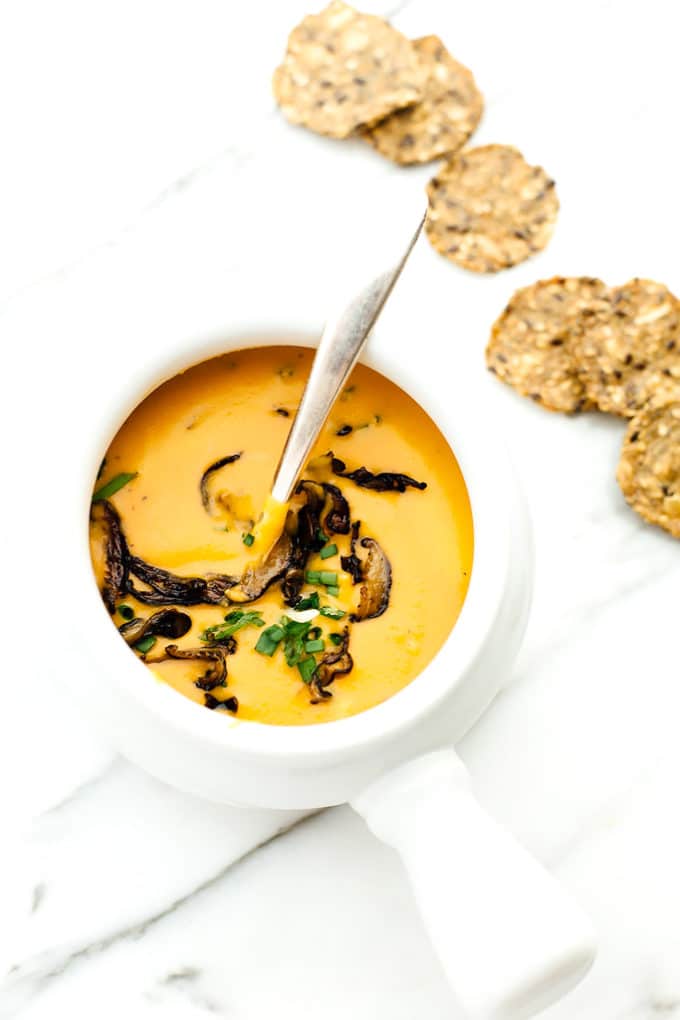 I should have saved more room to gush over this recipe! This Fully Loaded Vegan Cheesy Baked Potato Soup is everything. Smooth, hearty, savory, satisfying, cheesy, and bacon-y (making up words = still a task on my to-do list). And so much more.

It's made with a similar technique as one of my all-time favorite soup recipes: this creamy broccoli cheese soup.

You'll start by making a big batch of shiitake "bacon". Yes, mushroom bacon. Don't knock it 'til you've tried it. It's been known to impress meat lovers. Seriously. Thinly sliced shiitakes are tossed in olive oil, sea salt, and black pepper and baked until they're sizzling, crisp, and golden-brown. 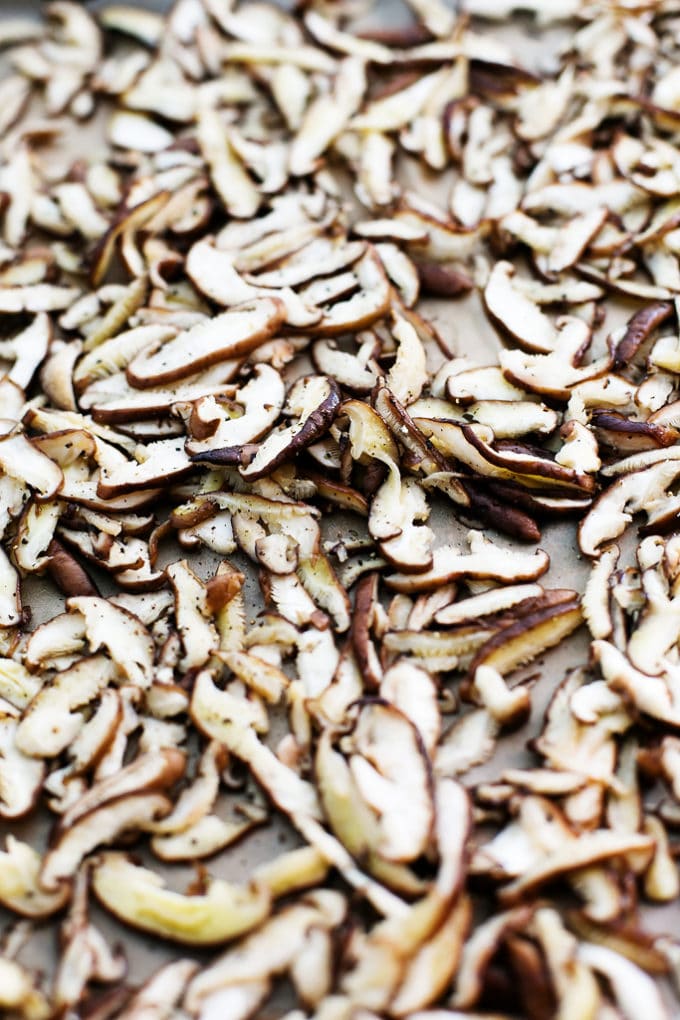 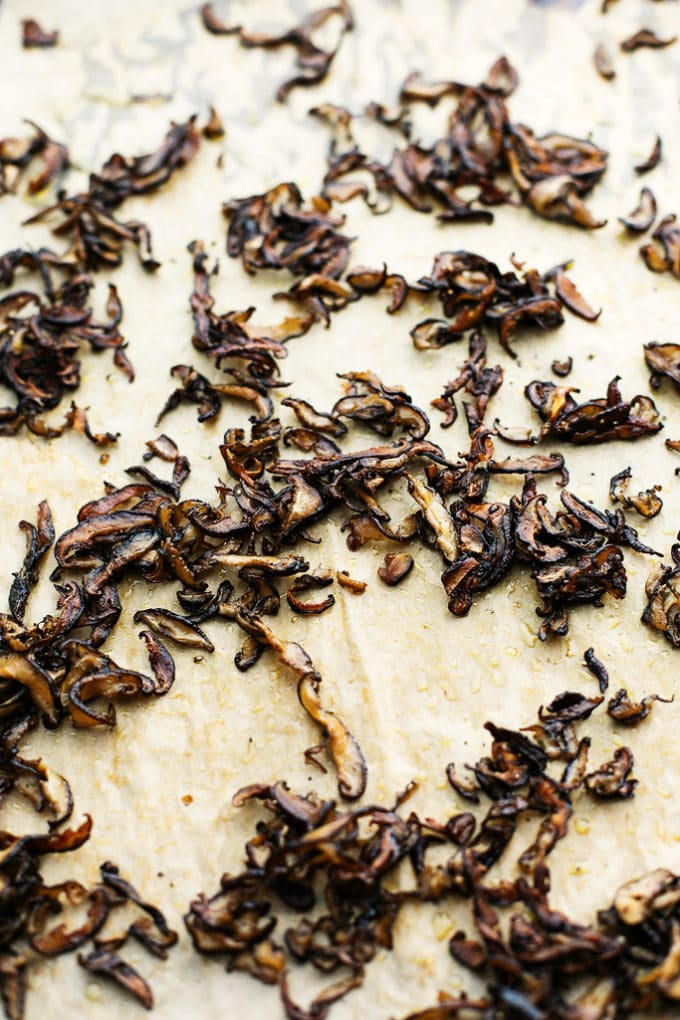 While the shiitakes are baking (or shall we say "baconing"), you'll get to work on the soup. A base of sautéed onions and shallots is sprinkled with smoked paprika, sea salt, and black pepper. Then, in goes the vegetable broth, potatoes (alright, technically they're boiled, not baked), and two cups of cauliflower florets. You'll bring everything to a boil and then reduce the heat, cover, and simmer for about 15 minutes.

Once the soup has finished simmering and the potatoes and cauliflower are tender, you'll use an immersion blender (or transfer the soup to a blender in batches) to blend until smooth. Once the soup is smooth, you'll stir in the "cheddar" sauce and continue to simmer for 3–5 minutes, or until the arrowroot begins to thicken the soup. Then, add a splash of fresh lemon juice and low-sodium tamari. These two ingredients are incredibly important, because they simultaneously balance, deepen, brighten, and intensify the flavors of the soup.

Once the soup is ready, ladle it into bowls and top with a generous mound of shiitake bacon and a sprinkle of chives or scallions (or both)! This soup is a dream, and it's everything a cheesy potato soup should be and so, so much more. It's luxuriously creamy, buttery, cheesy, soothing, and warming (especially on a chilly fall day). Plus, it's packed with plant-pure, feel-good ingredients and reheats like a dream. I recommend making a big batch on Sunday and reheating it for lunch, dinner, etc. throughout the week (see the recipe for tips on reheating). Happy slurping! ♥ 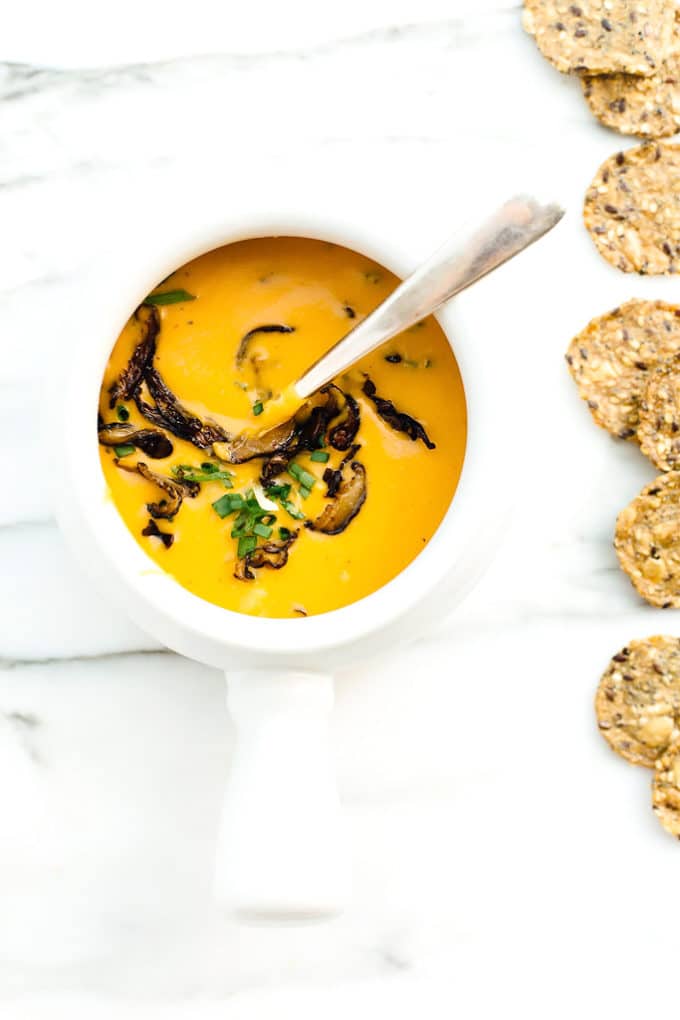 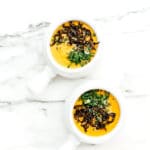 For the Shiitake Bacon

*To make the soup oil-free, simply swap the olive oil for low-sodium vegetable broth (you may need to add up to ¼ cup to sauté the onions and shallots), and omit the shiitake bacon.
**If you're not using a high-speed blender, soak the cashews in water for at least 2 hours before blending (or boil for 10 minutes).
***If you're preparing the soup ahead of time (as opposed to enjoying right after making it), hold off on making the shiitake bacon until 45 minutes before serving.