These vegan crispy BBQ smashed potatoes are packed with summer flavor. Boiled potatoes are tossed in a smoky BBQ spice rub, smashed, and baked until crisp and golden. The finishing touches are a drizzle of BBQ sauce and a sprinkle of fresh cilantro. 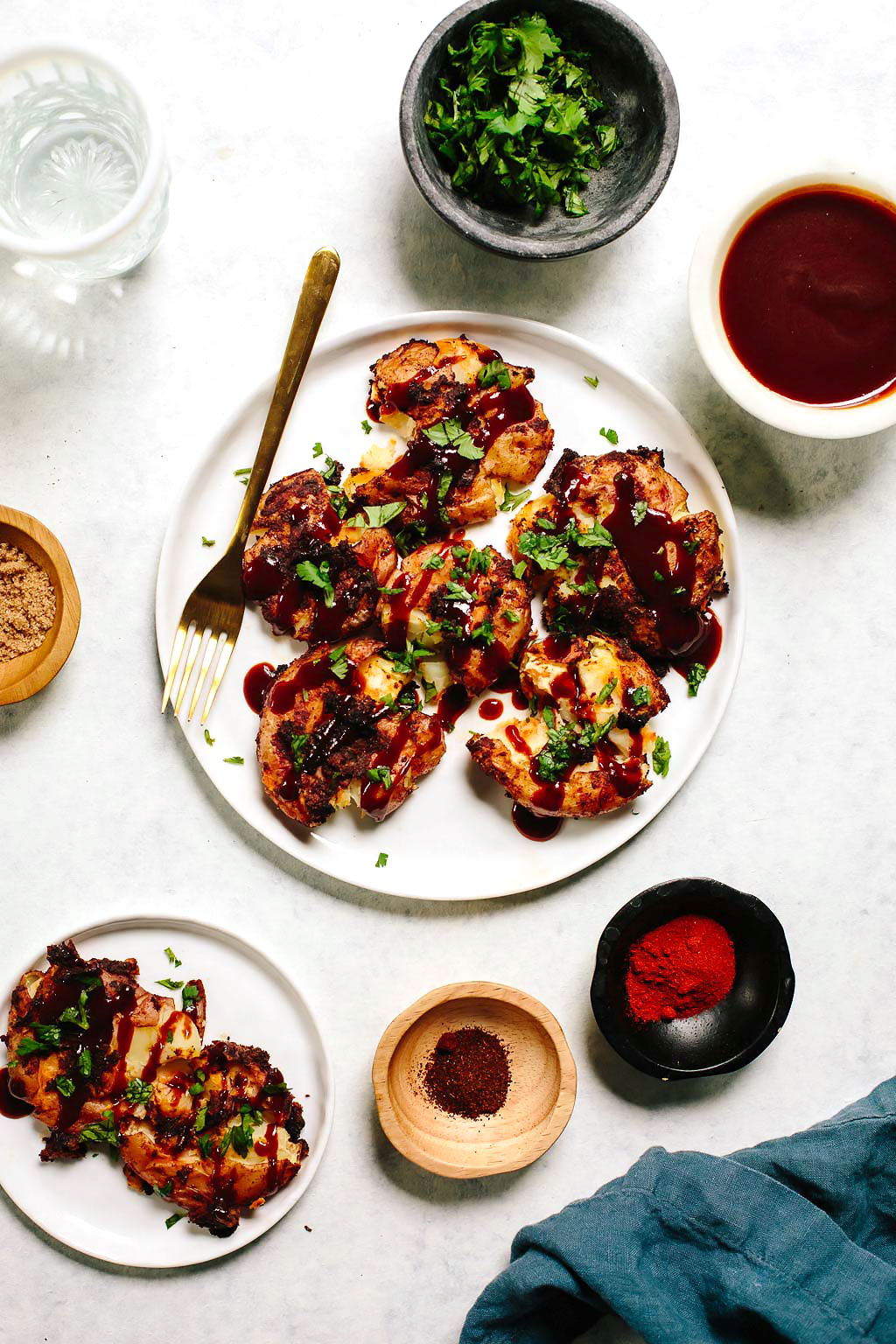 There must be something in the air, because there's been an explosion of recipes for crispy smashed potatoes recently. Have you noticed?

Whether you have or not, here I am with mine. 🤗

These crispy smashed potatoes have a summery twist thanks to the addition of a BBQ spice rub and barbecue sauce.

The process for making them goes a little something like this...

Gather two pounds of your favorite baby to small-medium size potatoes. You can use a mix of colors or keep them uniform. Red potatoes and baby Yukon gold work great for this recipe.

The important thing is to find potatoes that are generally consistent in size—e.g., all teeny, all small, etc. That way, they'll boil and roast evenly.

(Note: The potatoes pictured below aren't the ones I ended up using while testing the recipe—I used all uniform size red potatoes.) 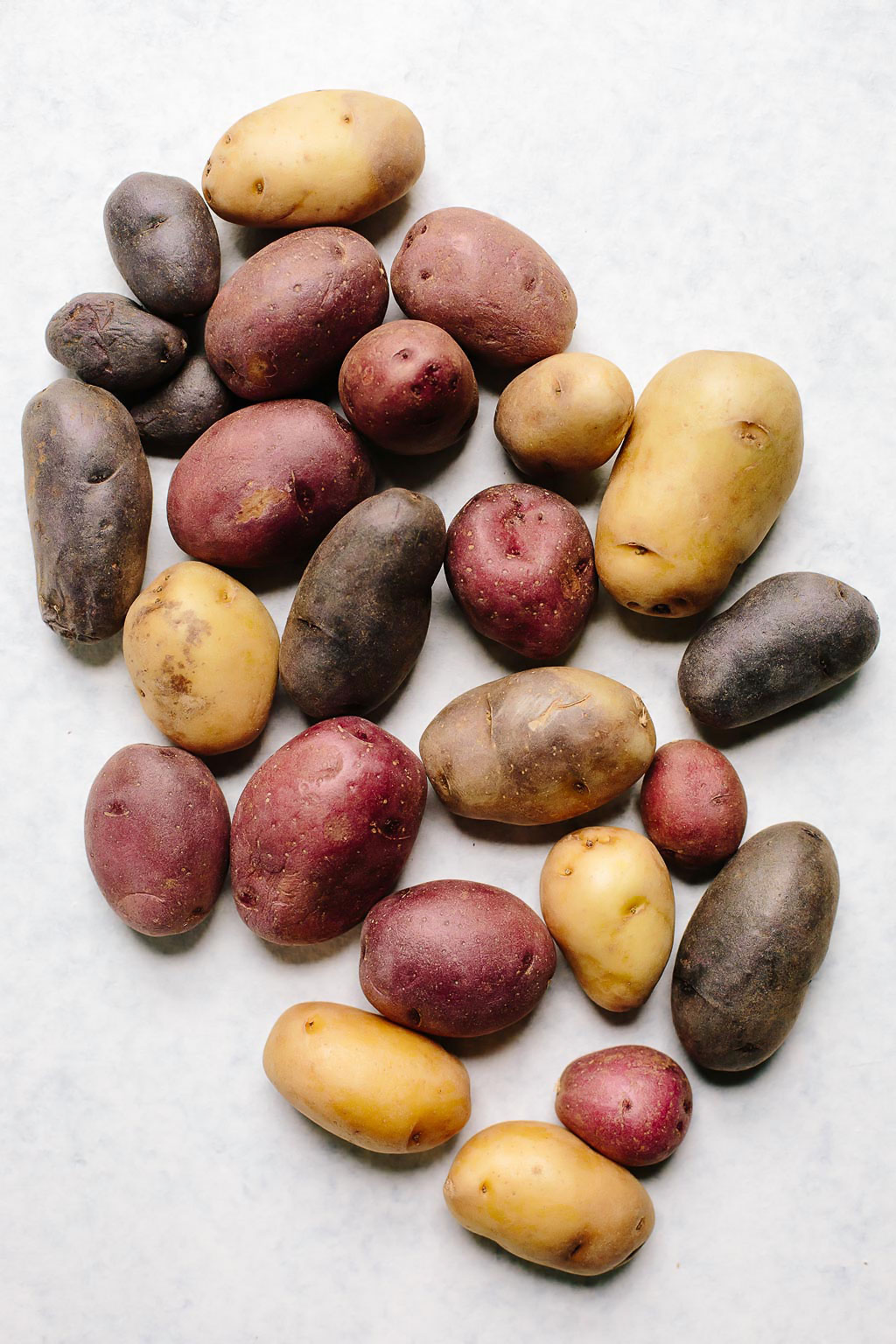 Once you've gathered your potatoes, give them a good scrub, add them to a large stockpot, and cover them with water.

Turn the heat on high until you have a rapid, rolling boil. Then, reduce the heat a touch and vigorously simmer for 15 to 20 minutes, or until the potatoes are fork tender. 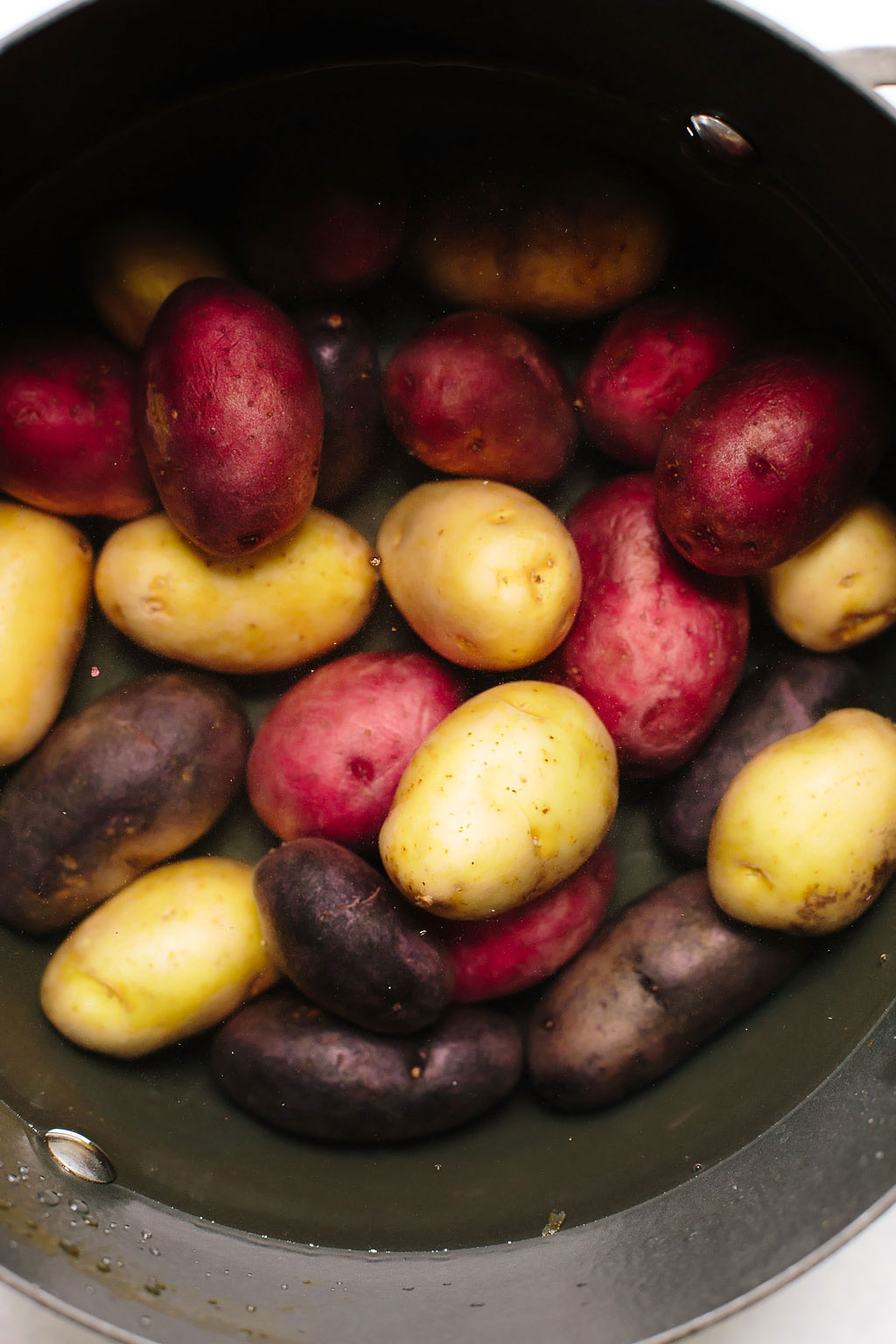 While the potatoes boil, you'll prepare the spice mixture. 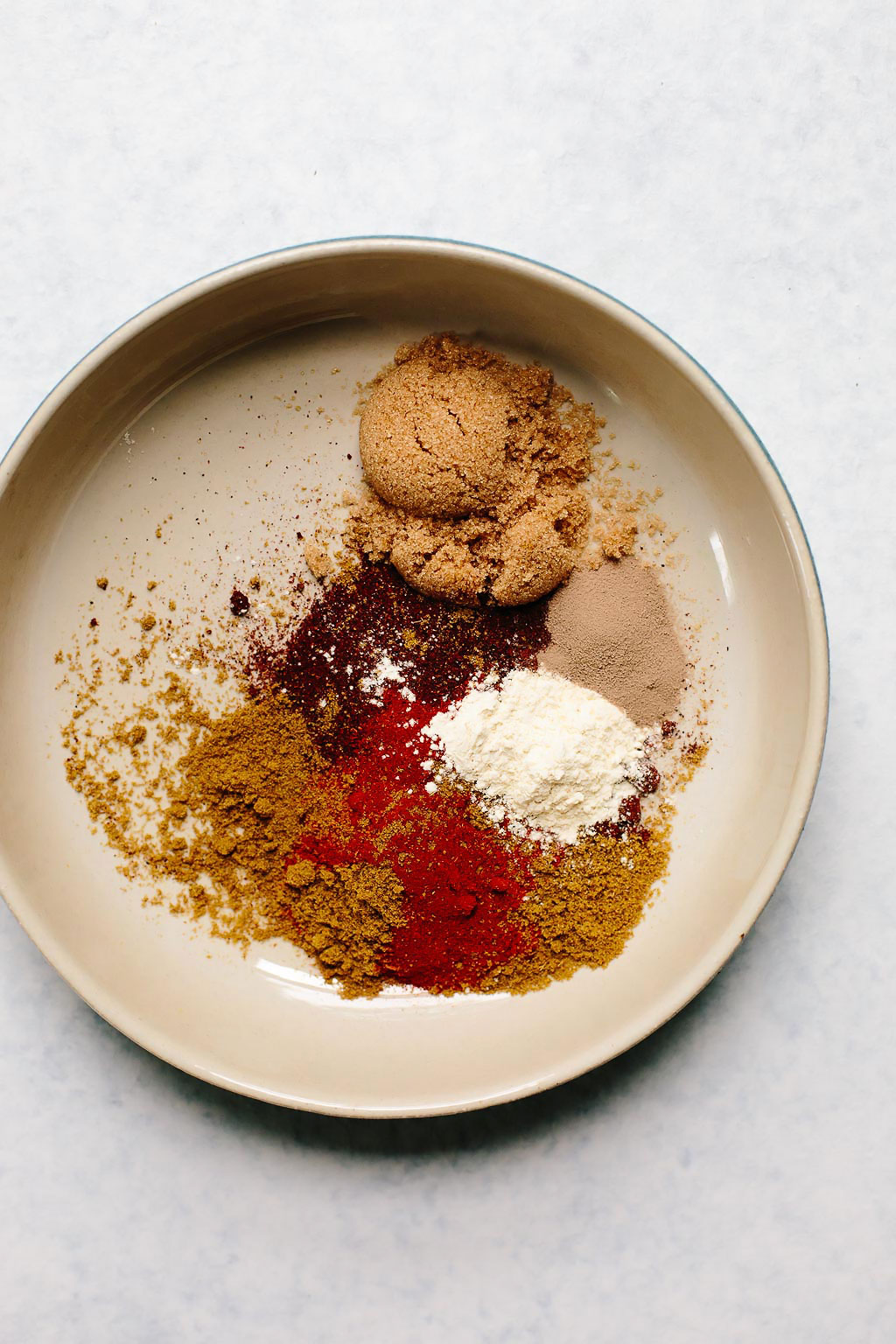 This spice rub takes on all the flavor nuances of BBQ sauce—sweet, smoky, garlicky, and a touch spicy—without adding any extra moisture to the potatoes, which means they still crisp up in the oven.

In case you're curious, I attempted to use BBQ sauce and spice rub in a few trials, and it was a total disaster. Soggy potatoes that were scorched to a crisp on the outside. Hence the reason it's spice rub only until after roasting. Then, you can drizzle that BBQ sauce on as liberally as you'd like.

Once the potatoes are boiled, strain them and transfer to a large mixing bowl. Drizzle two tablespoons of high-heat oil (I used grapeseed) over top, and toss to coat. Then, sprinkle with the spice mixture and toss to coat again.

Transfer the coated potatoes to a lined baking sheet, and reserve any excess oil/spice mixture.

Then, use a cup to smash each potato until nearly flattened. It's totally okay, welcomed even, if the potatoes break apart during smashing. When it comes to smashed potatoes, the messier the merrier.

To a certain degree. Don't get too carried away on me, ok?

Alright, so you've smashed your potatoes. Now, take that excess spice rub/oil mixture and rub a bit over the top of each potato. This ensures maximum flavor potential is reached. 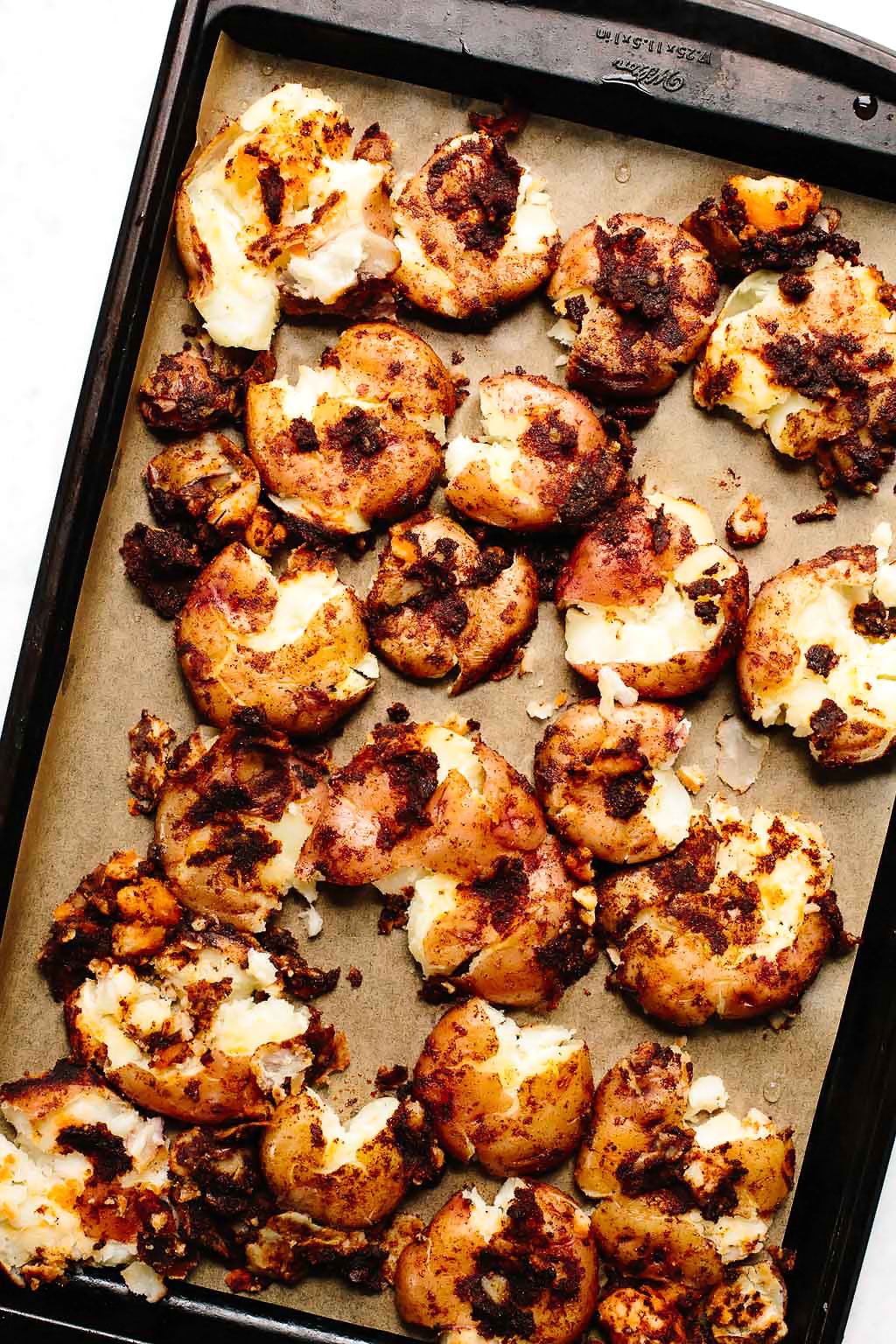 Then, pop the potatoes in the oven and roast for 20 minutes, or until they're golden brown with crispy bottoms and edges. 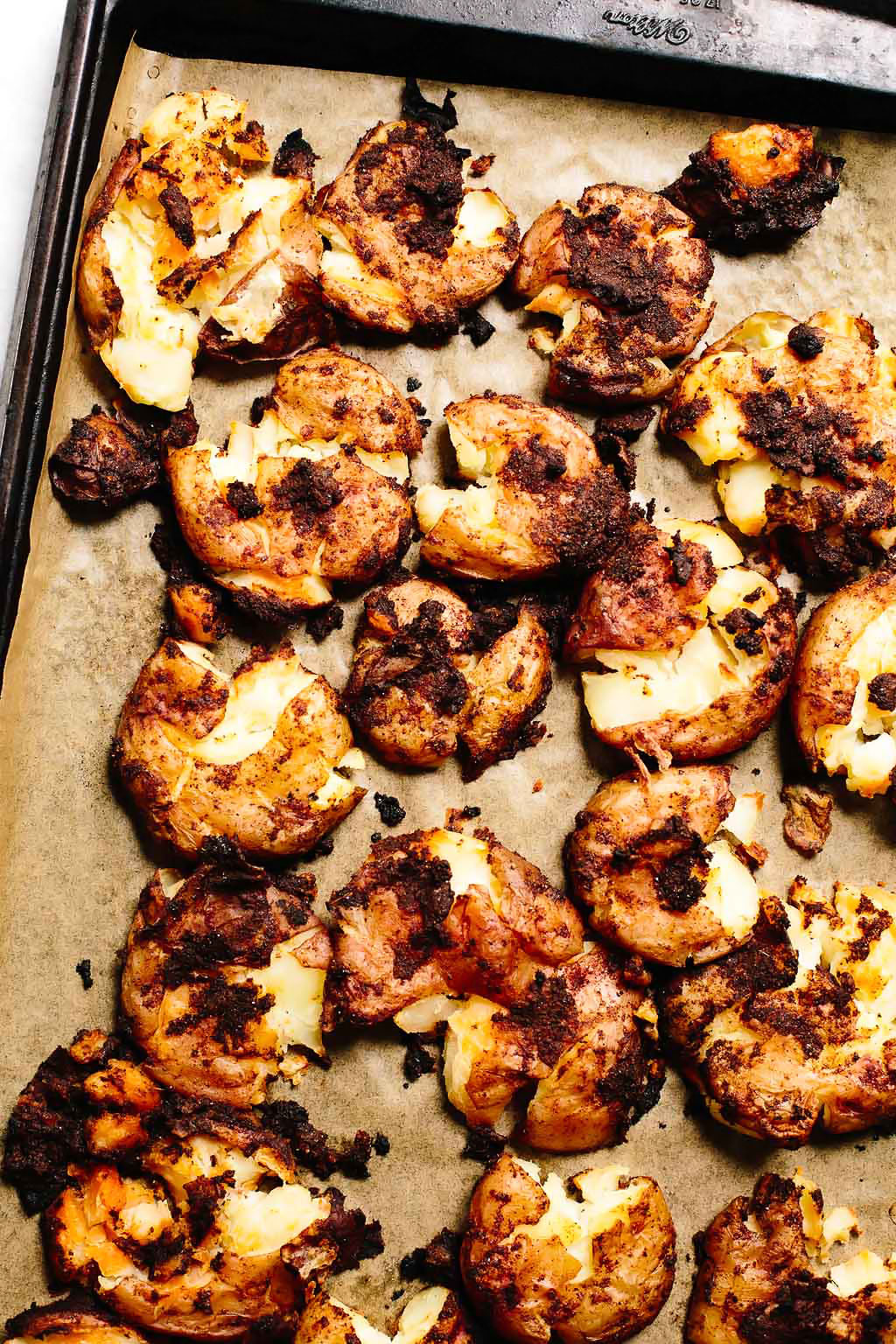 Finish the potatoes with drizzles of BBQ sauce and a sprinkle of cilantro. 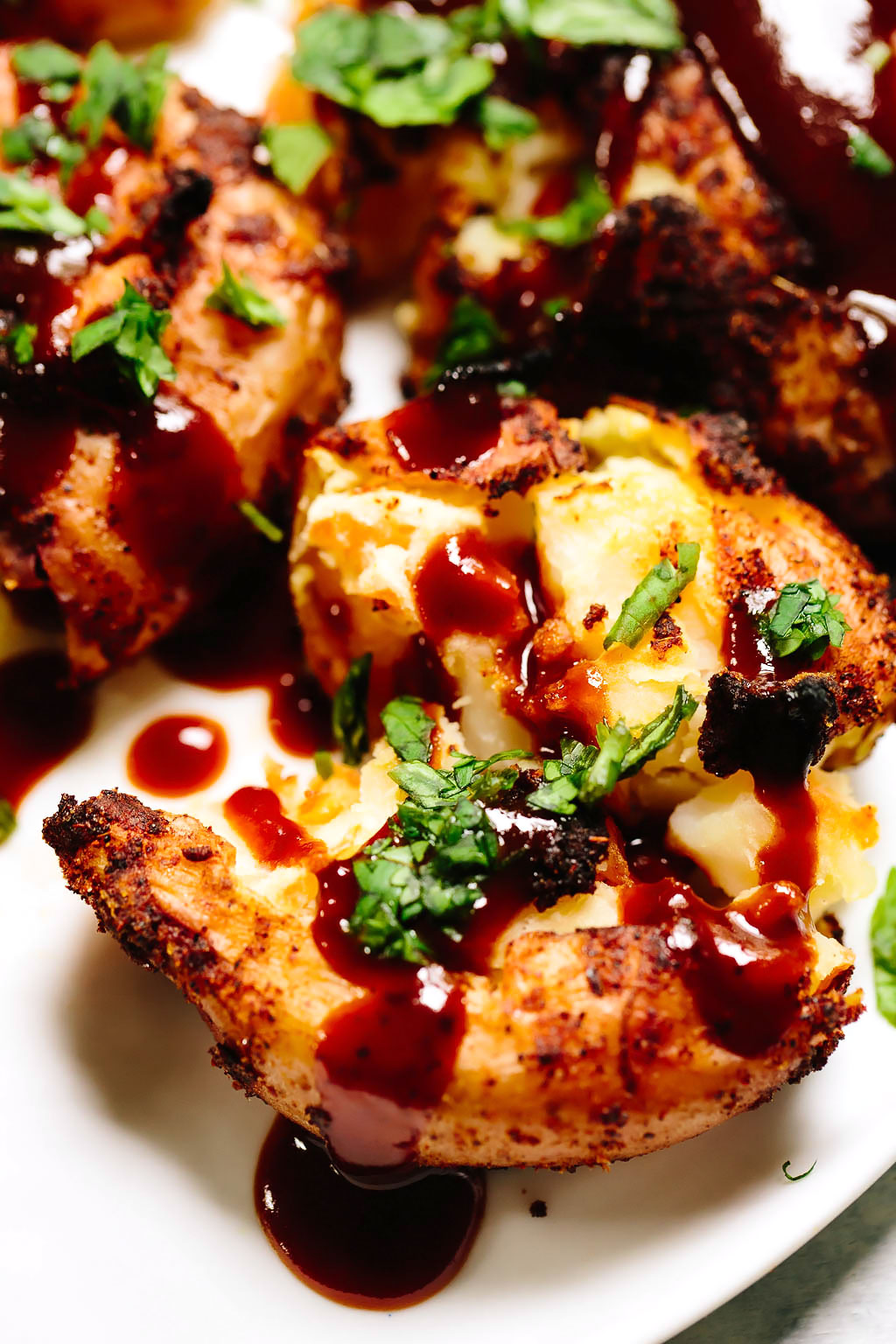 They'll make an excellent side at any long-weekend summer BBQs you might have on the horizon. 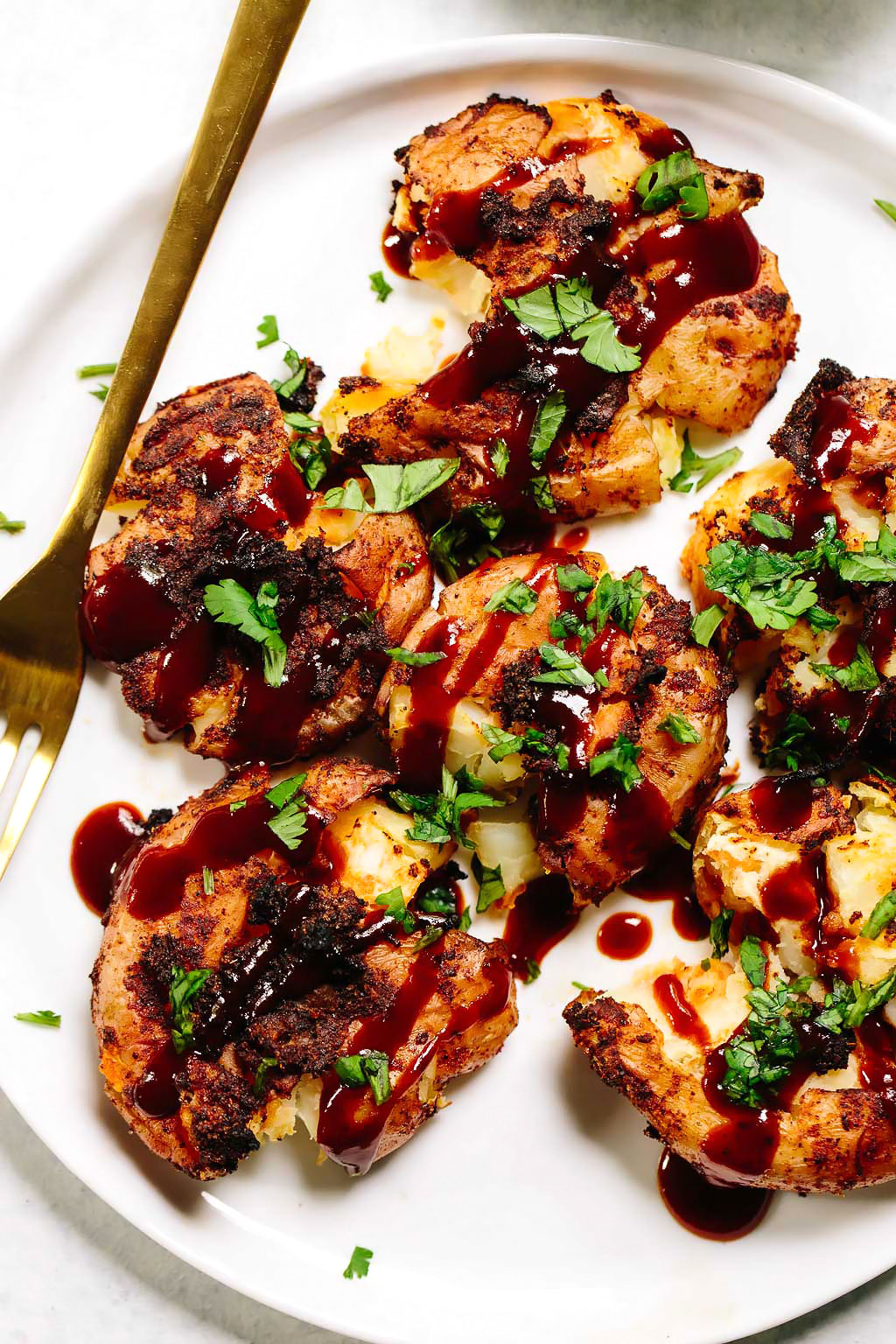 Recipe inspired by Oh She Glows. *Ideally, you want the potatoes to all be as similar in size as possible. This ensures even boiling and roasting.