This vegan colorful jicama noodle salad with creamy tahini-ginger dressing is as easy on the eyes as it is on your body. Jicama root is spiralized to create a crunchy, hydrating noodle base. The jicama noodles are then topped with juicy red + orange bell peppers, purple cabbage, scallions, kale, and cilantro. The dressing, oh, the dressing. This one is a real keeper. Tahini is whisked with tamari, sesame oil, lime juice, apple cider vinegar, agave nectar, ginger, garlic, and turmeric root to create a dressing that beckons you forward. It's creamy, garlicky, tangy, and sweet with just a hint of warmth from the fresh ginger. Plus, it coats the crisp vegetables and jicama noodles in the most wonderful way. 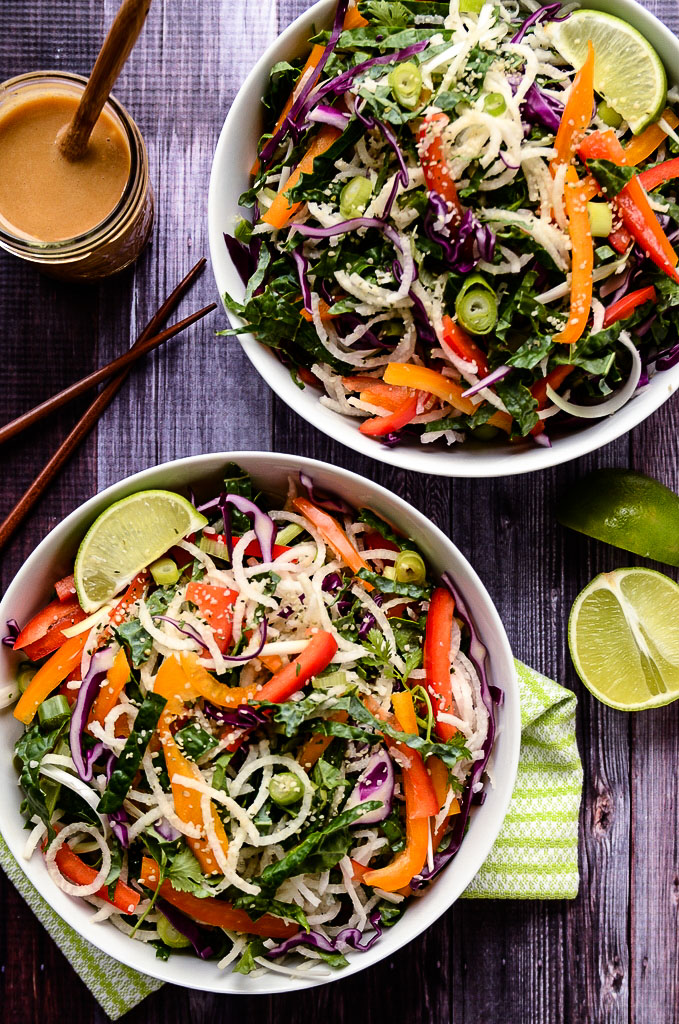 There's something so beautiful and comforting about a big bowl of colorful vegetables. Nourishing goodness straight from the earth, filling your plate with hues of the rainbow.

This dish is everything that a salad should be: vibrant, crunchy, full of texture, and filling with a dressing that will lure you in for bowl after bowl of fresh veggies.

Rather than weighing you down, this salad will leave you feeling energized and ready to take on whatever adventures meander in your direction throughout the day. I enjoyed a big bowl (and then some) while working the other day and felt fueled and satisfied for hours, which is always a welcomed outcome of lunch. Especially considering that I'm prone to sleepiness in the afternoon.

Rather than being a morning or night person, I recently realized (after, you know, 30 years) that I'm a morning and night person. However, I'm not a mid-afternoon person. I often find myself highly-distractible and inconsistent between the hours of 2pm and 3pm, having a difficult time focusing on anything for more than 20 minutes. I've learned a few ways to prevent my mid-afternoon doldrums (e.g., not eating hot soup for lunch, having a healthy snack within arm's reach, and drinking water throughout the day), but it's always nice to find a meal like this one that ticks up my energy a few notches.

To make this salad, you'll have to endure a good bit of peeling, deseeding, and chopping, but the outcome is completely worth the work. Jicama root is peeled and spiralized to create a crunchy, fresh noodle base. Then, you'll have a chance to work your snazzy knife skills as you thinly slice red peppers, orange peppers, purple cabbage, scallions, kale, and cilantro. It's slightly time-consuming, but just throw on some catchy tunes (see below), get chopping, and have fun with it.

The dressing comes together in a little more than five minutes, and it's worth every single second. Tahini is whisked with soy sauce, sesame oil, lime juice, apple cider vinegar, agave nectar, ginger, garlic, and turmeric root to create a dressing that dares you not to take another bite.  It's creamy, garlicky, tangy, and sweet with just a kick of warmth from the fresh ginger. It blankets the vegetables and jicama noodles in the most wonderful way, and it's packed with zesty flavors and nutritional goodness.

Today's Sound Bite is Help Me Lose My Mind by Disclosure. It's not a new song but it packs an irresistible beat (just wait for the 48 second mark) and soothing vocals that will turn the salad-making process into a kitchen dance party. Just chop + dance responsibly. 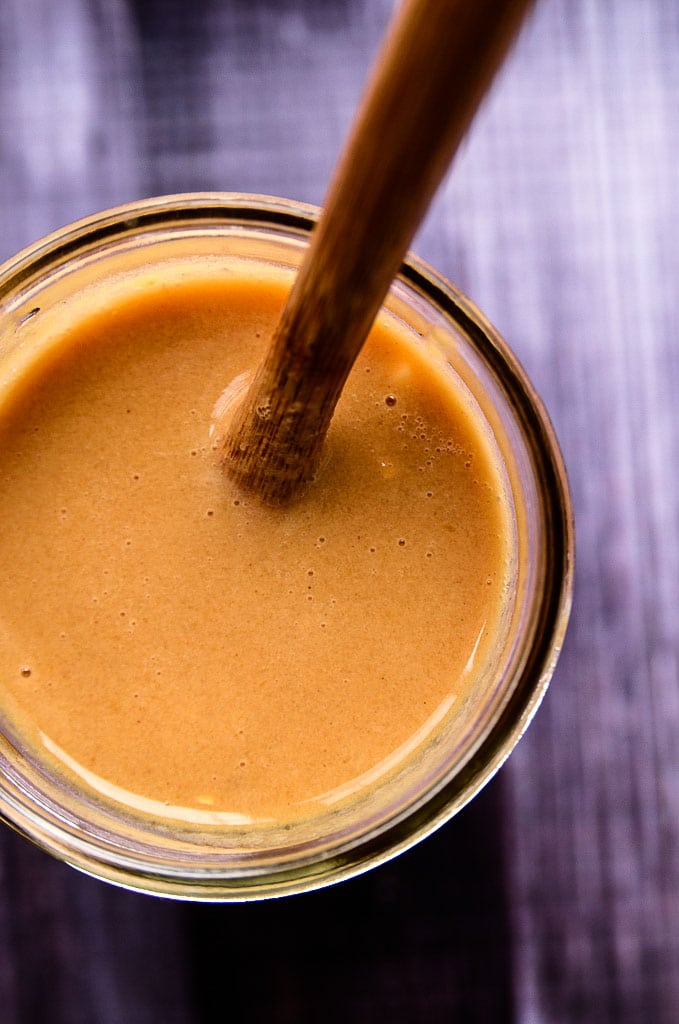 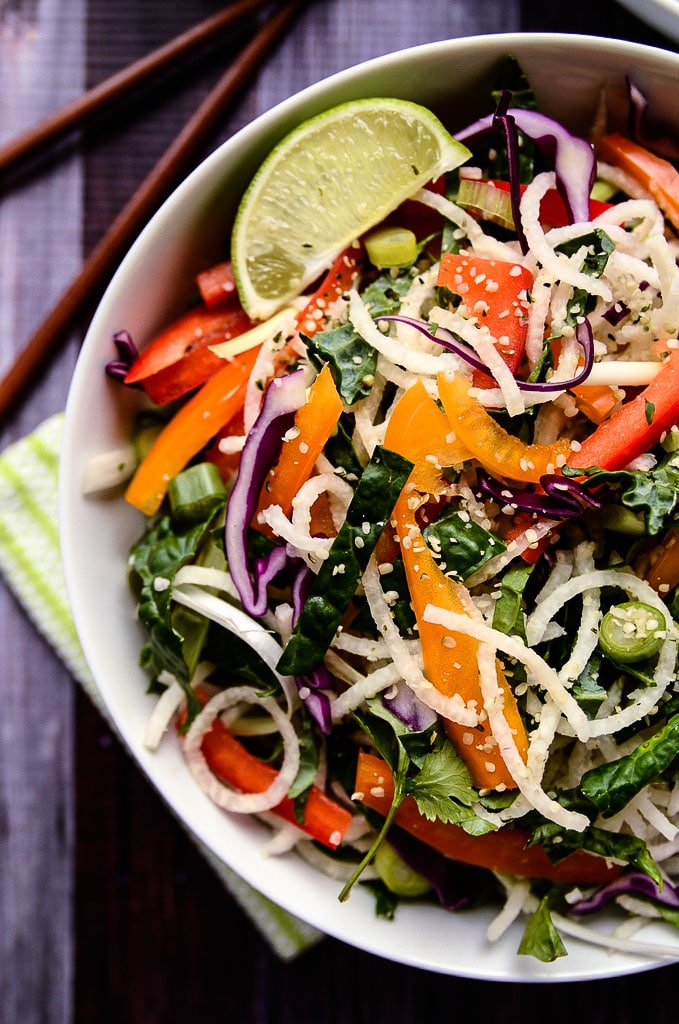 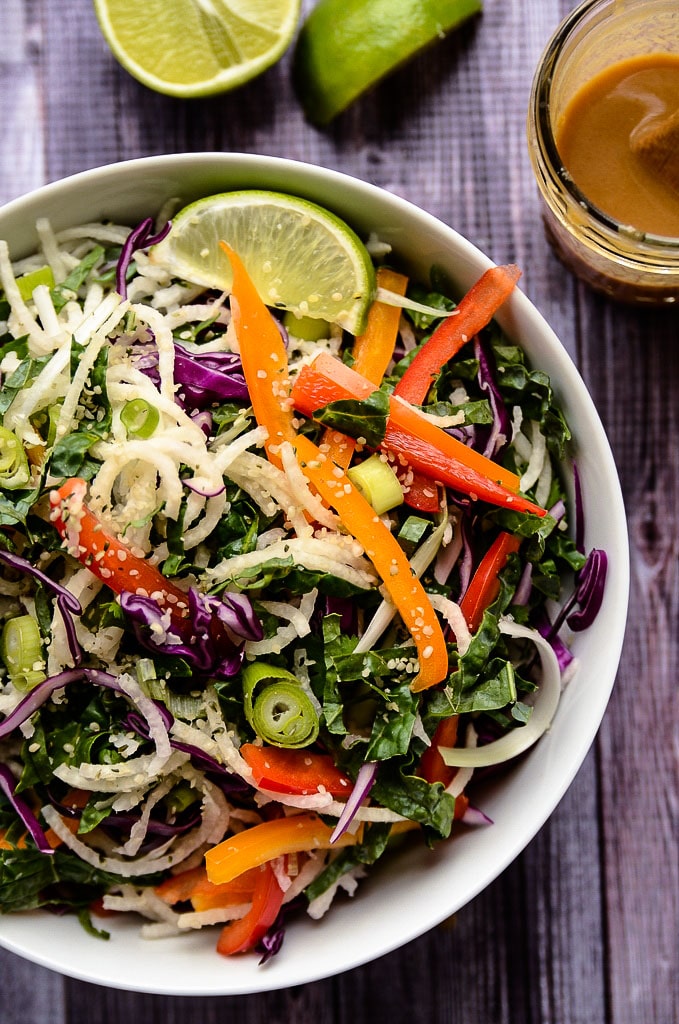 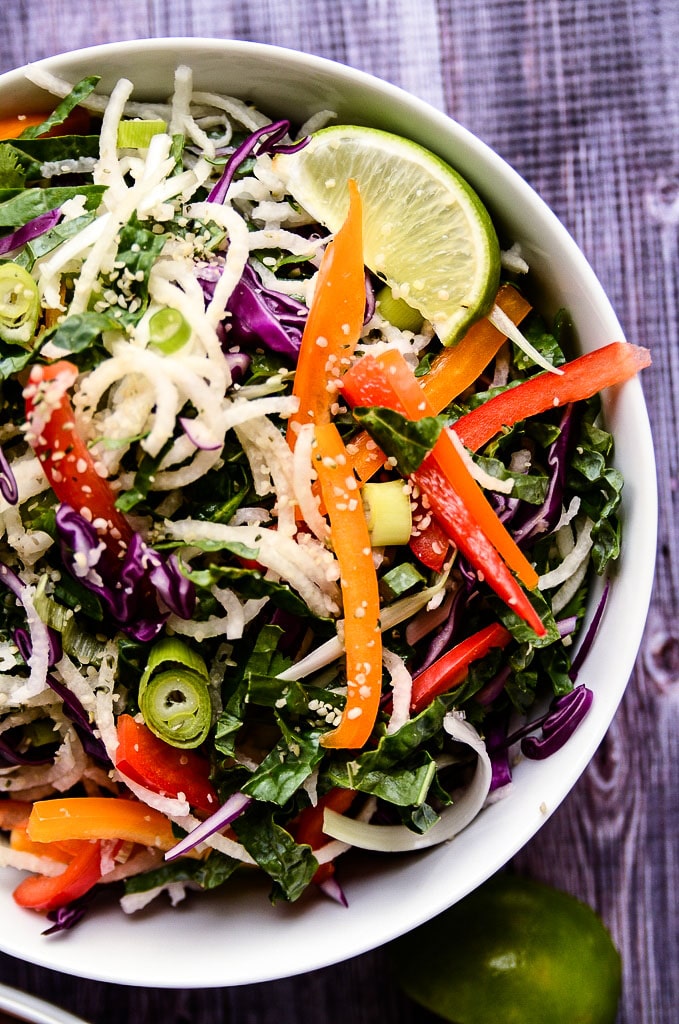 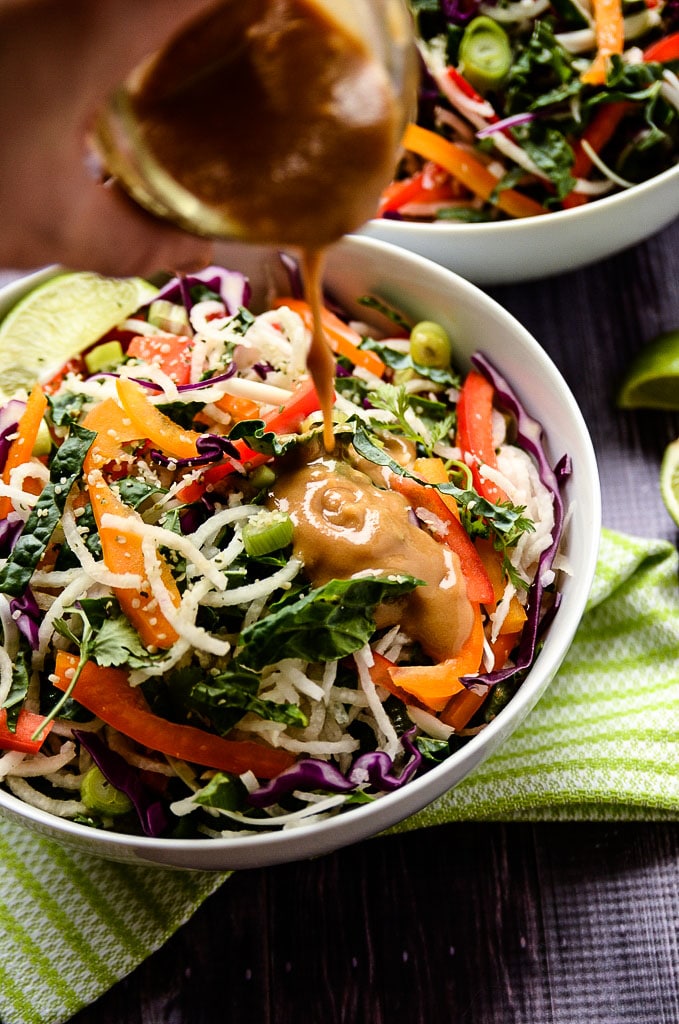 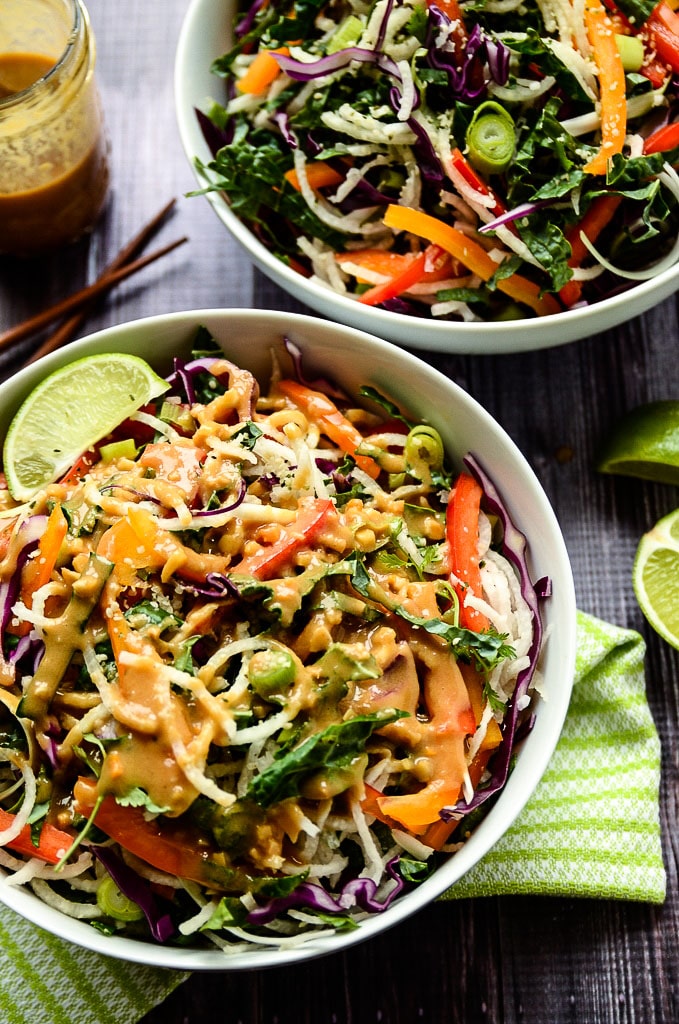 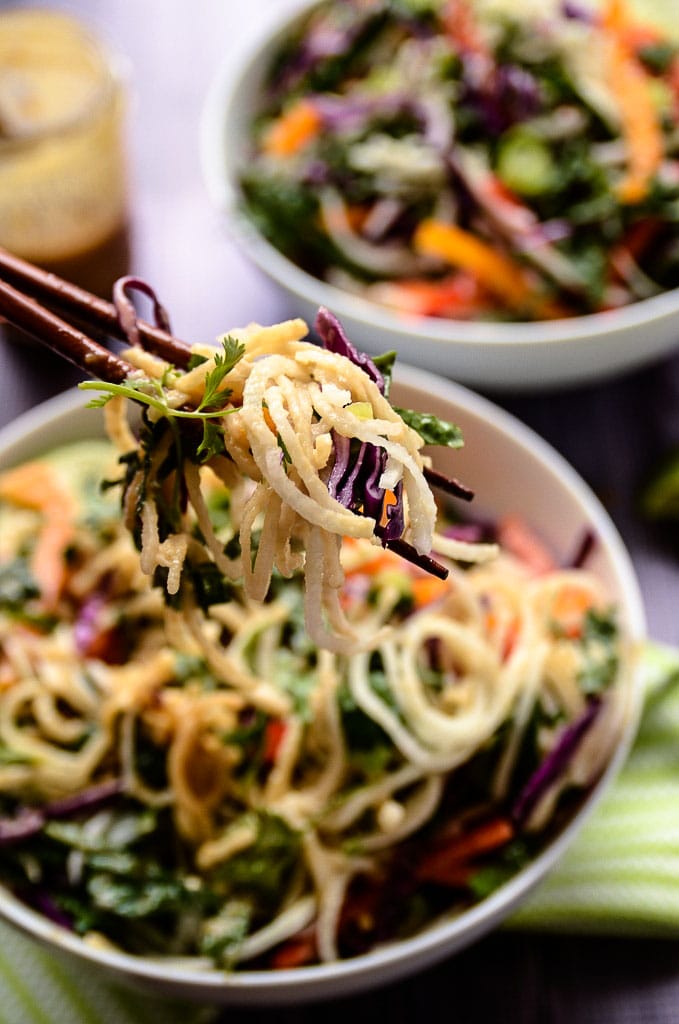 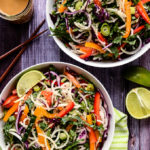 Jicama is spiralized to serve as "noodles" in this fresh vegetable salad. Then, peppers, scallions, purple cabbage, kale, and cilantro are tossed with the jicama and drizzled with a creamy tahini-ginger dressing. This recipe can serve 2-3 for a full meal or 4 smaller side salads.
Course Noodles, Salad
Cuisine Gluten-Free, Grain-Free, plant-based, Vegan
Prep Time 30 minutes
Total Time 30 minutes
Servings 2 -4

To Make the Dressing

To Assemble the Salad