You are here Home » Antioxidant Bark

...And I'm not talking about tree bark. Although likely full of healthy fiber, I don't recommend eating the crunchy exteriors of trees. Oh no, I'm talking about dark chocolate filled with antioxidant-rich goodies. This chocolate bark is stuffed with toasted coconut, raw pepitas, dried cherries, and chia seeds and it's makes-you-weak-in-the-knees good. I have a few warnings for you though:

Warning 1: This chocolate bark has an addiction rating of 10. You will attempt to engage self-control by eating one or two pieces but you will fail. However, this is one of those rare occasions when failing is actually winning because A) you're eating chocolate and B) it's full of antioxidant-rich garnishes.

Warning 2: Your indulgences/love affair with this bark will leave you with chocolate on your face. And, if you're extra blissfully unaware, you'll walk around with chocolate on your face for a full 45 minutes before your husband will see you, burst into a fit of laughter, and suggest that you walk yourself to the nearest mirror to take a gander. Don't worry, karma apparently dishes out its payback in chocolate-covered form these days. As I was writing this post, I looked over at my sweet + handsome husband only to see that the side of his mouth was covered in the remnants of chocolate bark. This bark will get you good.

Warning 3: If you live with a pepita + dried cherry bandit, hide these ingredients before making the bark or you'll 1) be running back to the store or 2) be dishing out a swift slap on the wrist to notify your roommate that his new favorite ad hoc trail mix is about to be coated in chocolate. Chocolate trumps trail mix.

Warning 4: Not making this antioxidant bark would be a huge mistake on your part. You'd be missing out on chocolate, antioxidants, and pure enjoyment. Plus, it returns strongly on its investment; you need not invest much time or energy in making this bark for it to return a significant amount of flavor and happiness. 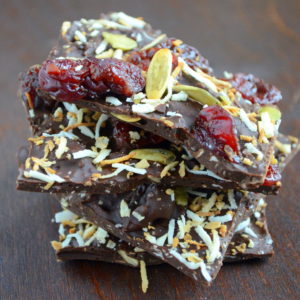