These gluten-free, almost raw vegan oatmeal raisin cookies with vanilla cashew buttercream are downright dreamy. A simple, nearly raw oatmeal cookie base is made with a combination of walnuts, oats, dates, and raisins. This naturally sweetened dough is formed into cookies and slathered with an ultra thick vanilla cashew buttercream. The chewy oatmeal raisin cookie base pairs perfectly with the sweet buttercream icing, making this recipe one for the books. 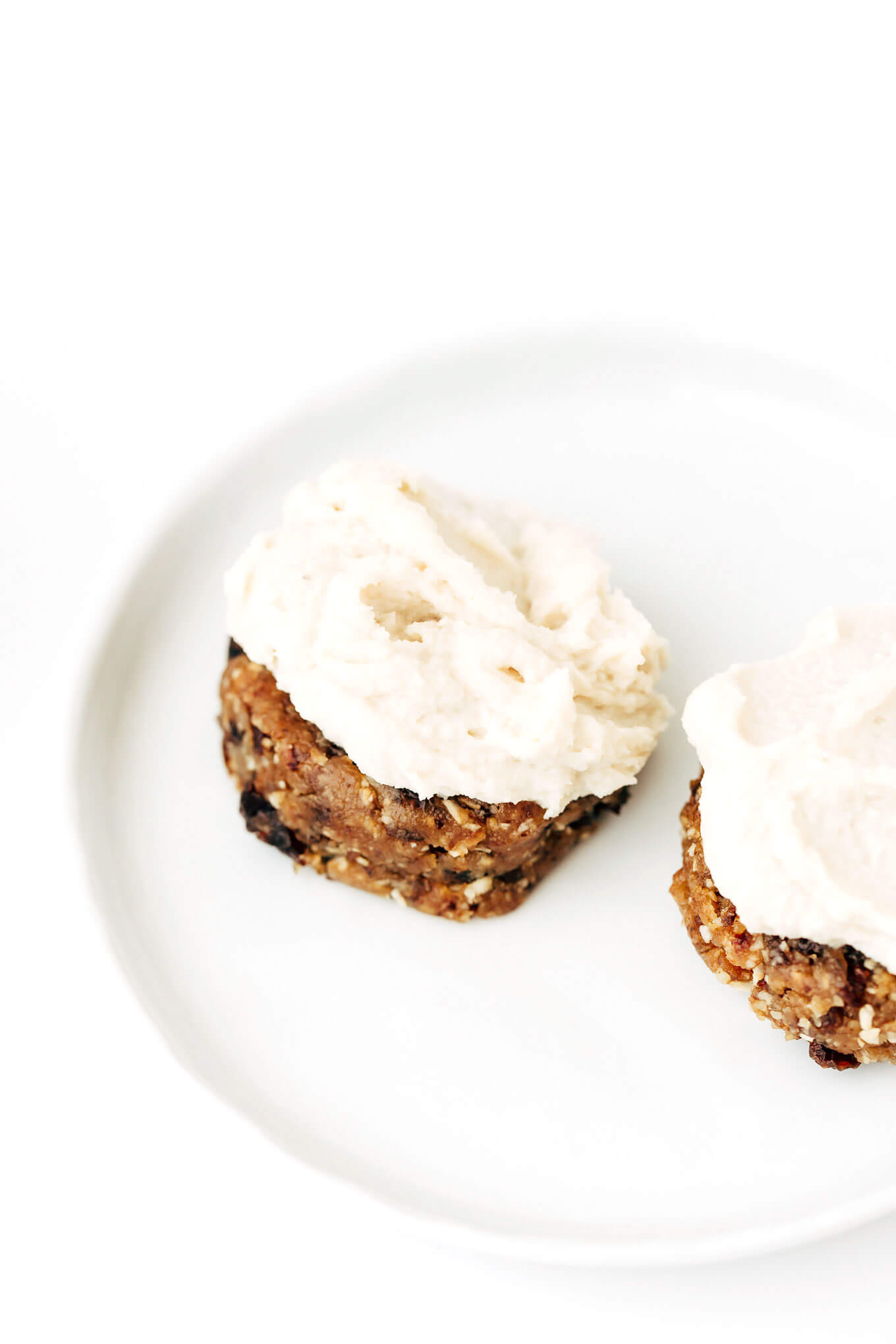 This post is sponsored by Silk. All thoughts and opinions are my own.

I've mentioned this before, but I come from a long line of dessert lovers. My mouth is lined with sweet teeth, and a dessert-free day is a very rare occurrence.

Even my great grandma Murphy, who lived to the grand age of 96 (and shoveled the deep Chicago snow out of her own driveway nearly as long), enjoyed oodles of sweet treats right up until the very end. And my goodness was the woman a firecracker. Rumor has it that as she blew out the candles on her 96th birthday cake, she joyfully proclaimed that her birthday wish was to die, because she'd done everything she'd wanted to do in her lifetime (she passed just a few weeks later).

Some genes skip a generation, but that doesn't appear to be the case with dessert loving. It's really got a hold on our family lineage.

Given its strong roots, sweet things are a much-awaited staple at holidays and family gatherings. From cakes to truffles to pies to crumbles to ice cream to crisps to cookies, there's a sweet for every craving.

That said, there are a few tried-and-true favorites that have made repeat appearances throughout the years.

One of the all-time favorites being my uncle's oatmeal raisin cookies with vanilla buttercream. If you have my cookbook, this is the same uncle that inspired the mini banoffee pies on page 253. My uncle swears these cookies are nothing fancy—merely the oatmeal raisin cookie recipe off the back of the Quaker Oats tub—yet they become something so darn special with a thick slathering of buttercream.

I've veganized the original version of his cookies a few times but haven't loved the results. Perhaps it's the vegan buttery spread (not my favorite) or maybe my sweet teeth have gotten a little less sweet over the years, but a straight-up vegan conversion of those cookies just doesn't do it for me.

So, for years, I've been wanting to create a version of those decadent oatmeal raisin cookies that keeps things a little closer to the earth and a bit more natural.

And well, I guess you know where I'm going with this, but the day has come, and these cookies are even more amazing than their classic Quaker Oats predecessors. 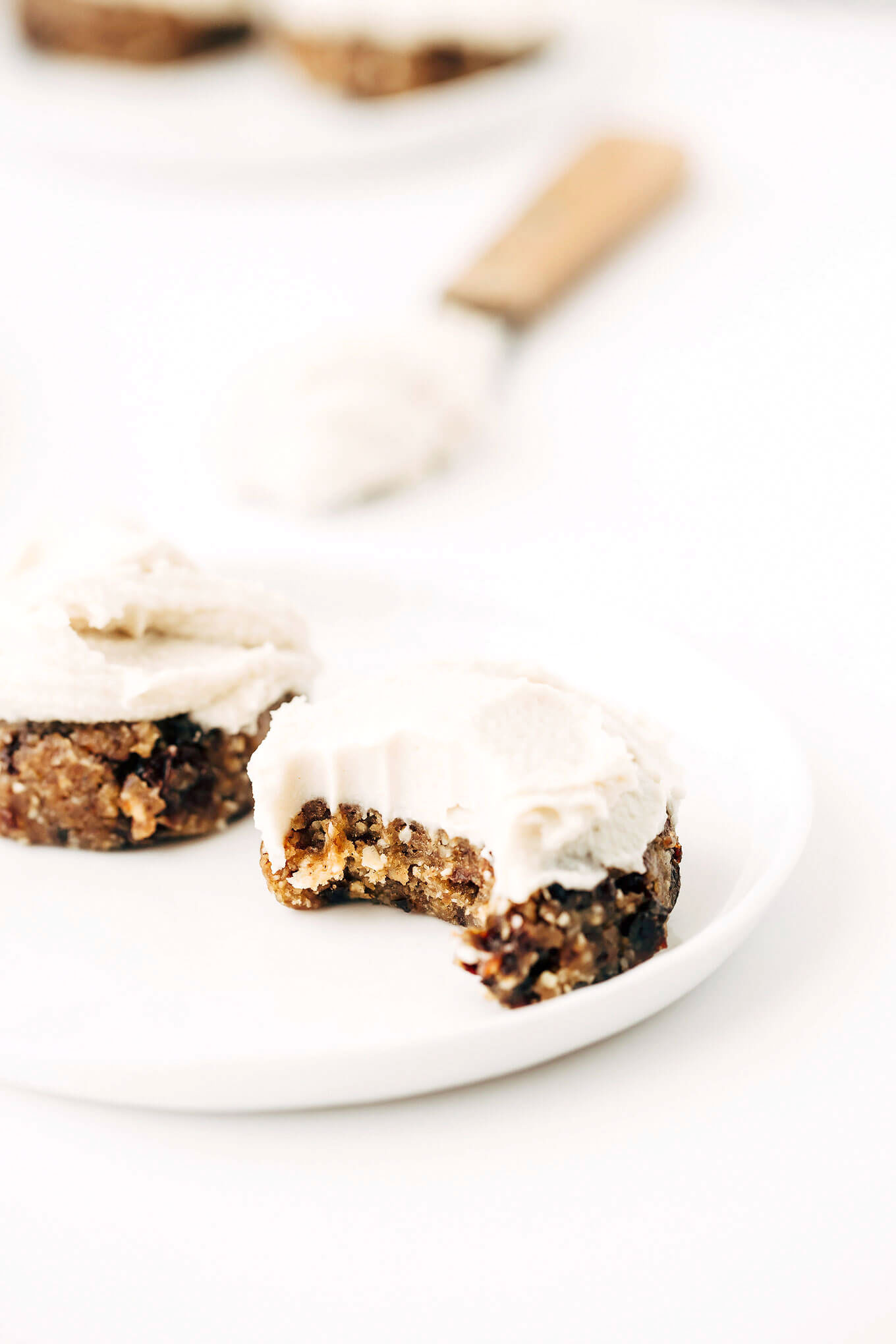 The vanilla cashew buttercream is a vanilla-forward, non-tangy version of the icing in this blondie recipe and this cake recipe. It's naturally sweetened and made with a small handful of plant-based goodies.

To make it, you'll add raw cashews and Silk Unsweetened Almondmilk to a high-speed blender. Blend, blend, blend until it becomes a super thick and very smooth cream.

Then, add the remaining ingredients—melted coconut butter, pure maple syrup, coconut flour (naturally thickens the icing), vanilla, and sea salt. Give it all another blend until smooth. 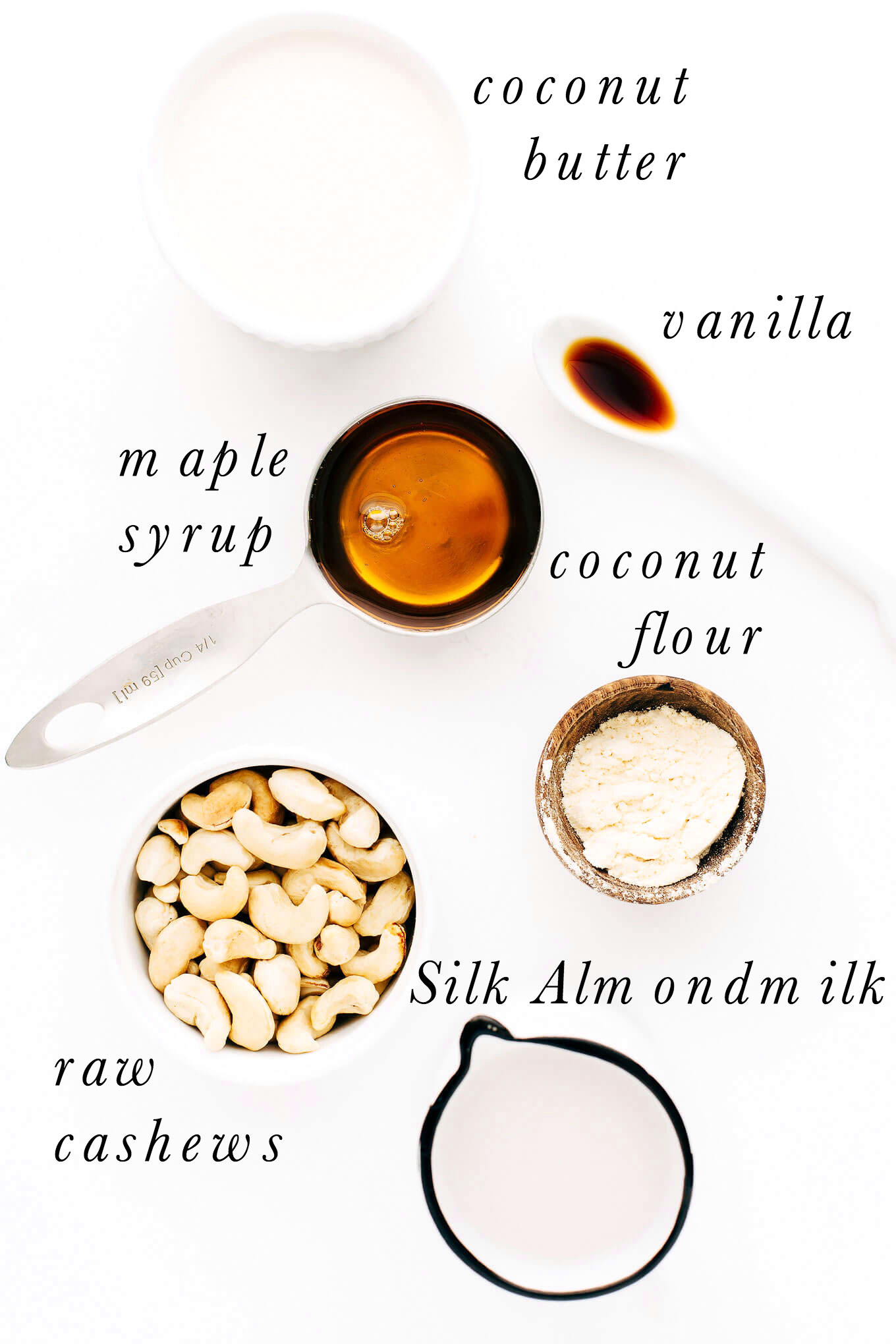 Finally, transfer the icing, which will be a bit on the runny side, to a shallow bowl, and chill in the freezer for 30 minutes or more.

Whisk the buttercream every 10 to 15 minutes to prevent freezing, until it becomes super thick and slather-worthy like so... 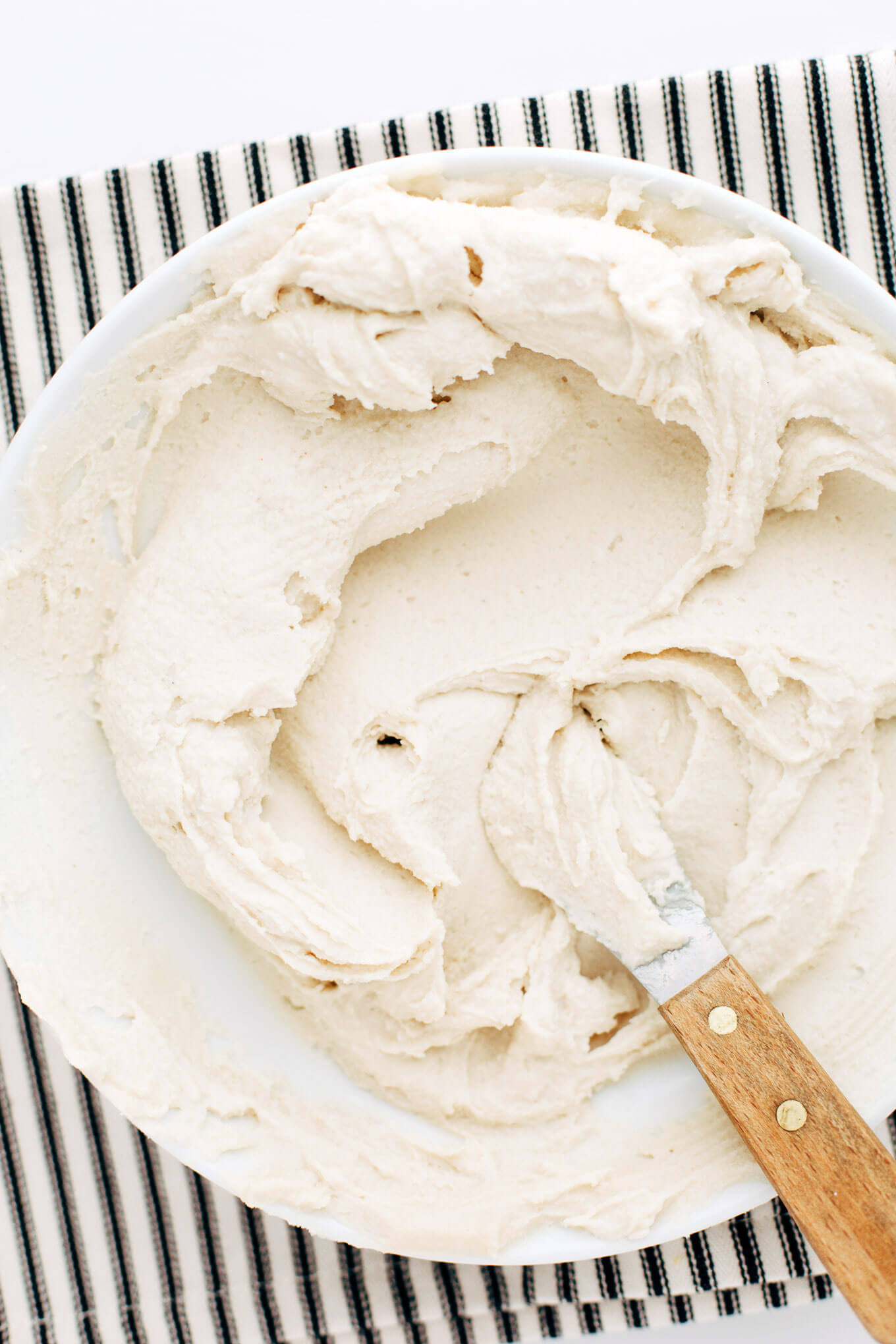 While the buttercream chills, you'll get to work on the cookies.

Add raw walnuts and rolled oats to a food processor and process for just 30 seconds to a minute, or until ground into a coarse meal.

Then, add pitted medjool dates, vanilla, and sea salt, and pulse until the mixture forms small, sticky clumps of dough.

The cookie dough will appear crumbly yet easily stick together when pressed... 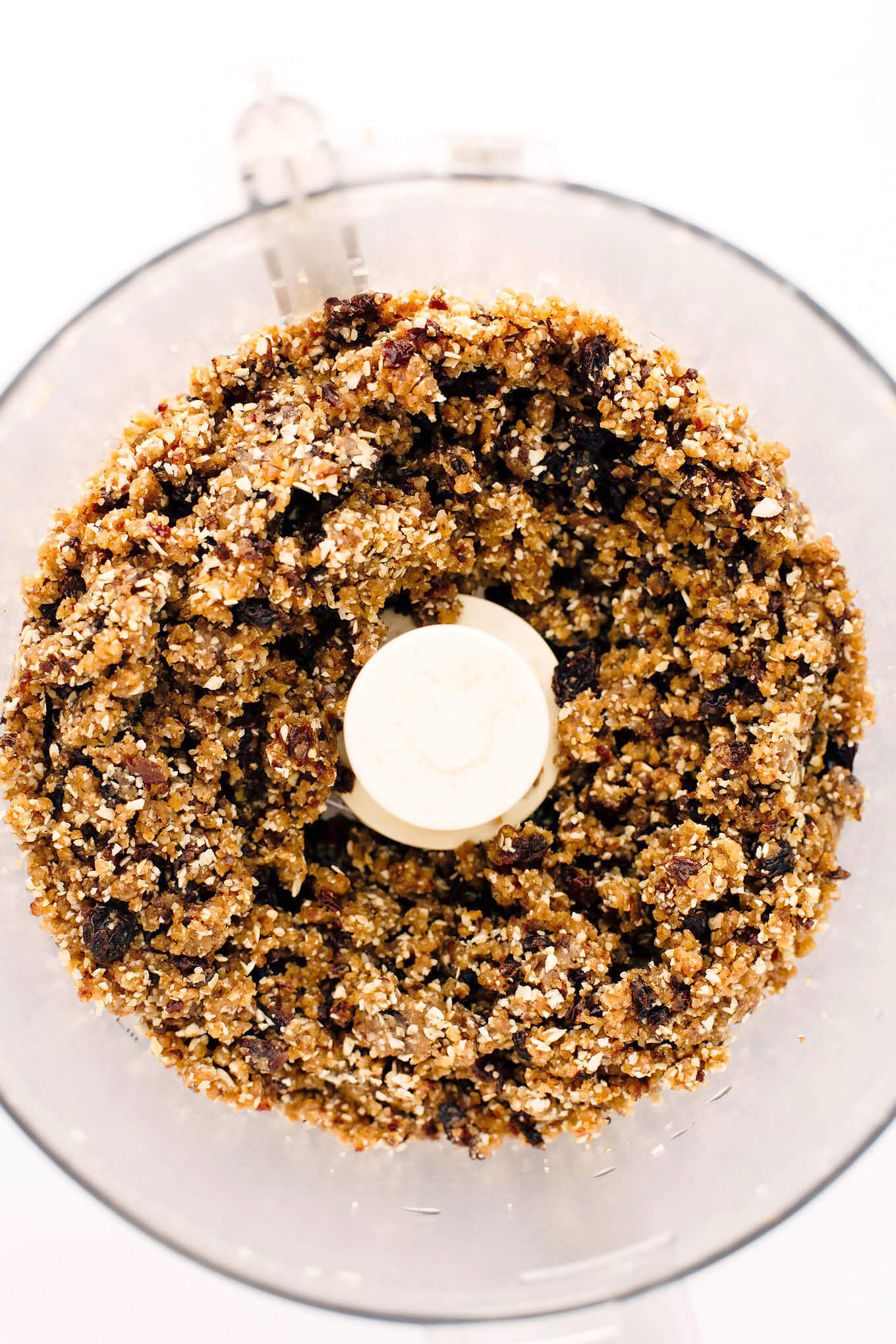 Scoop out small mounds of the dough and drop on to a lined baking tray. 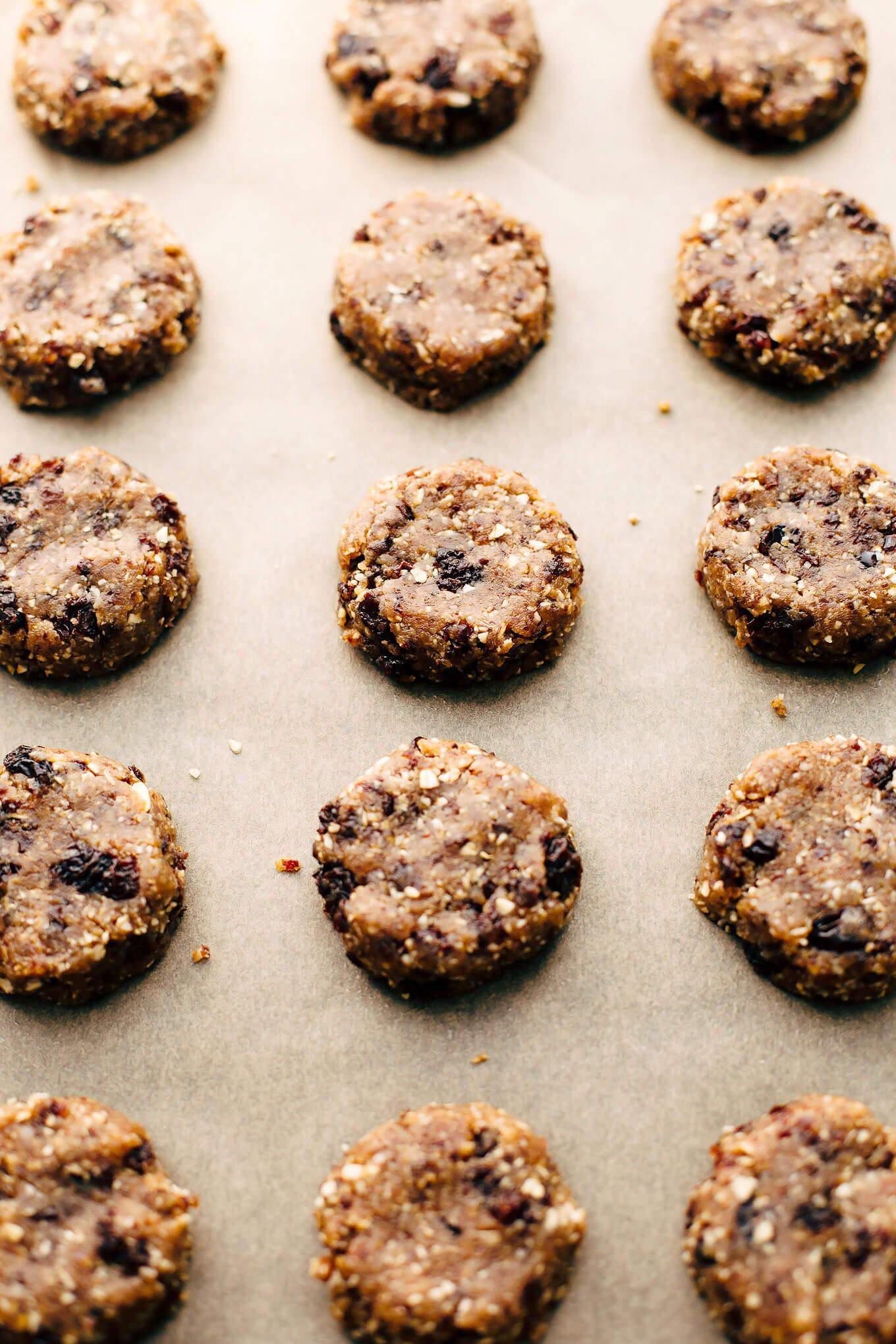 And now for the best part...

Grab that bowl of vanilla cashew buttercream and a handy spatula, and slather the top of each cookie with a generous mound of icing. This is no time to be frosting-shy... 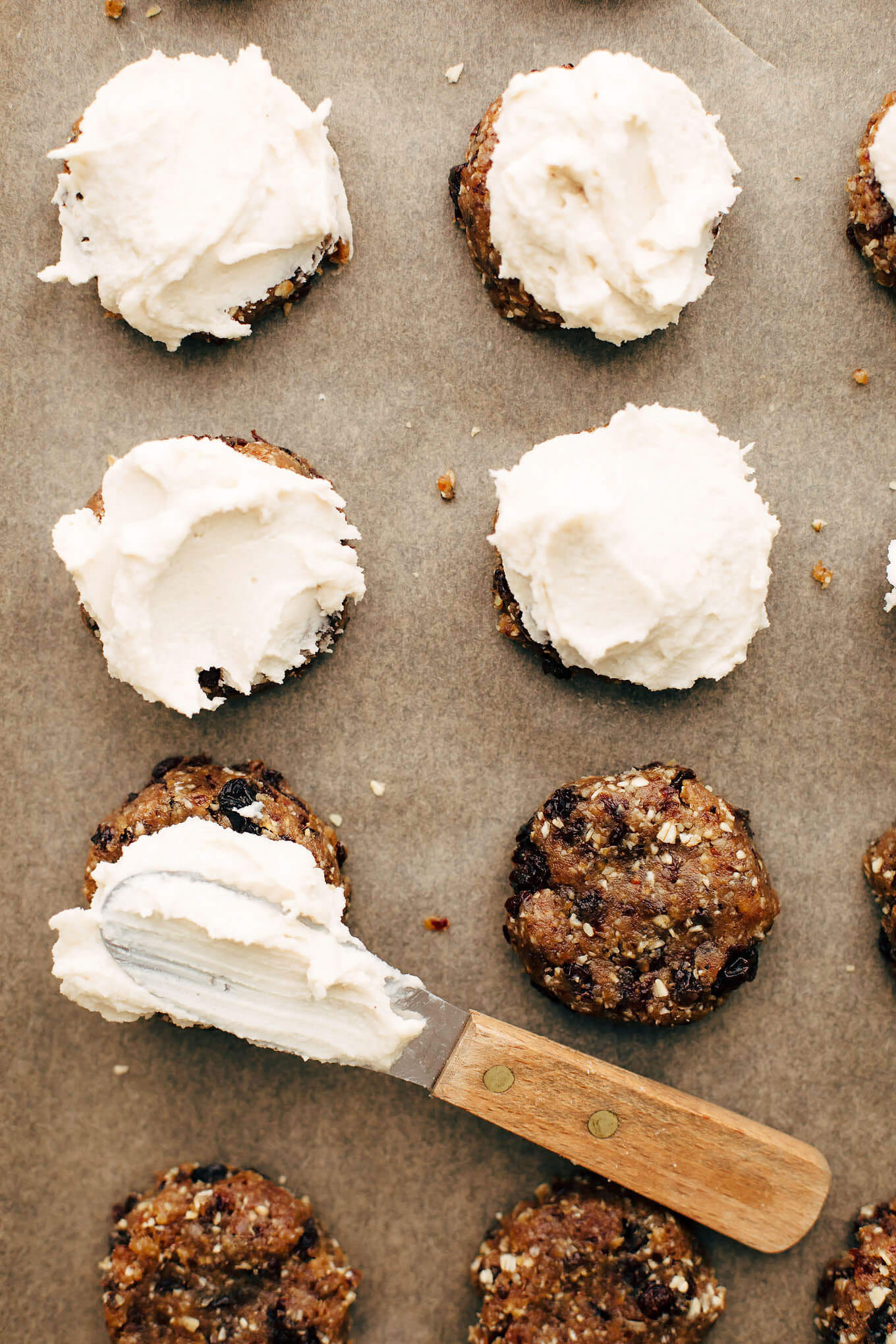 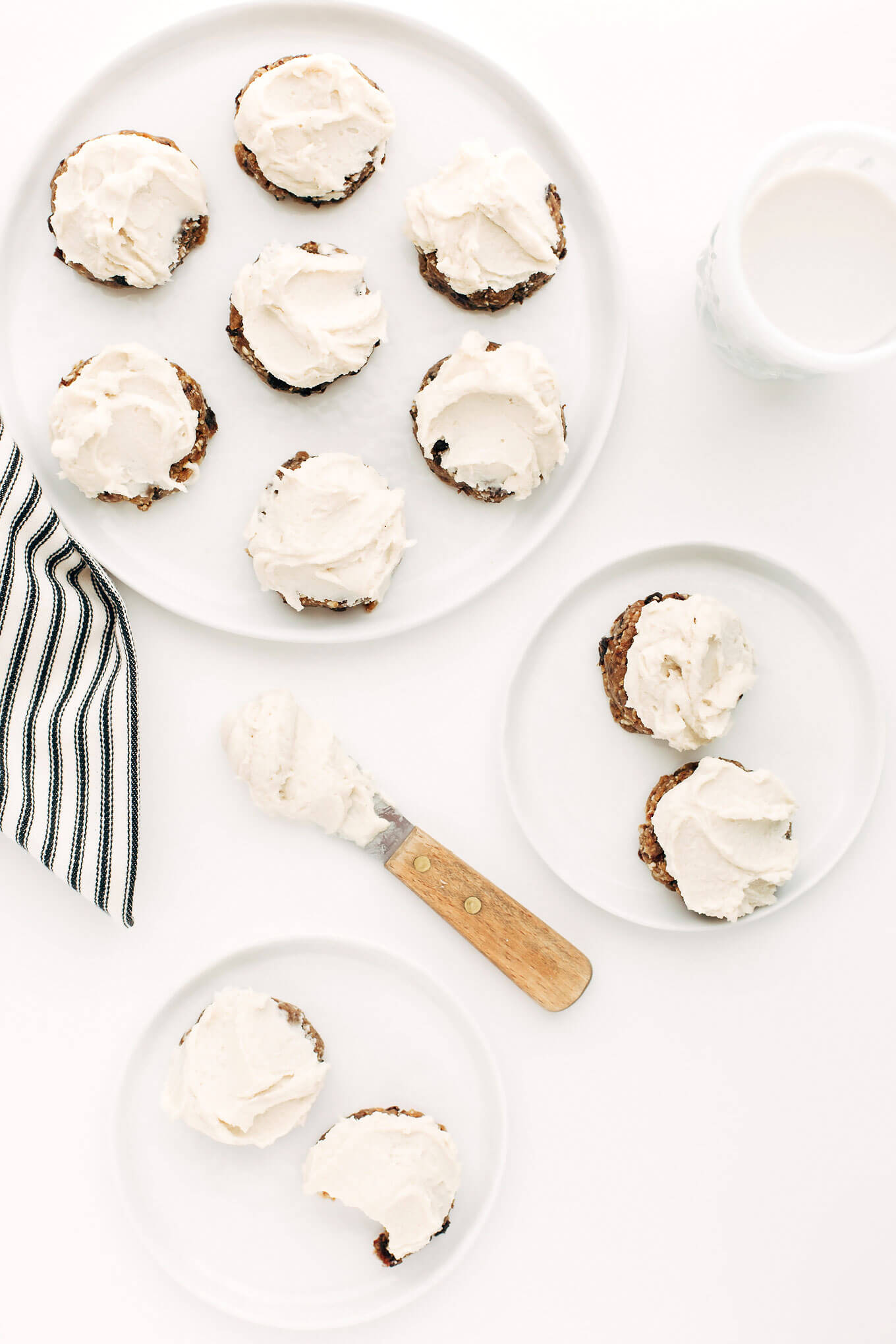 The cookies will keep in the refrigerator for up to 4 days but can also be frozen for up to two weeks.

These oatmeal raisin cookies make my heart happy. I hope they make yours happy, too! 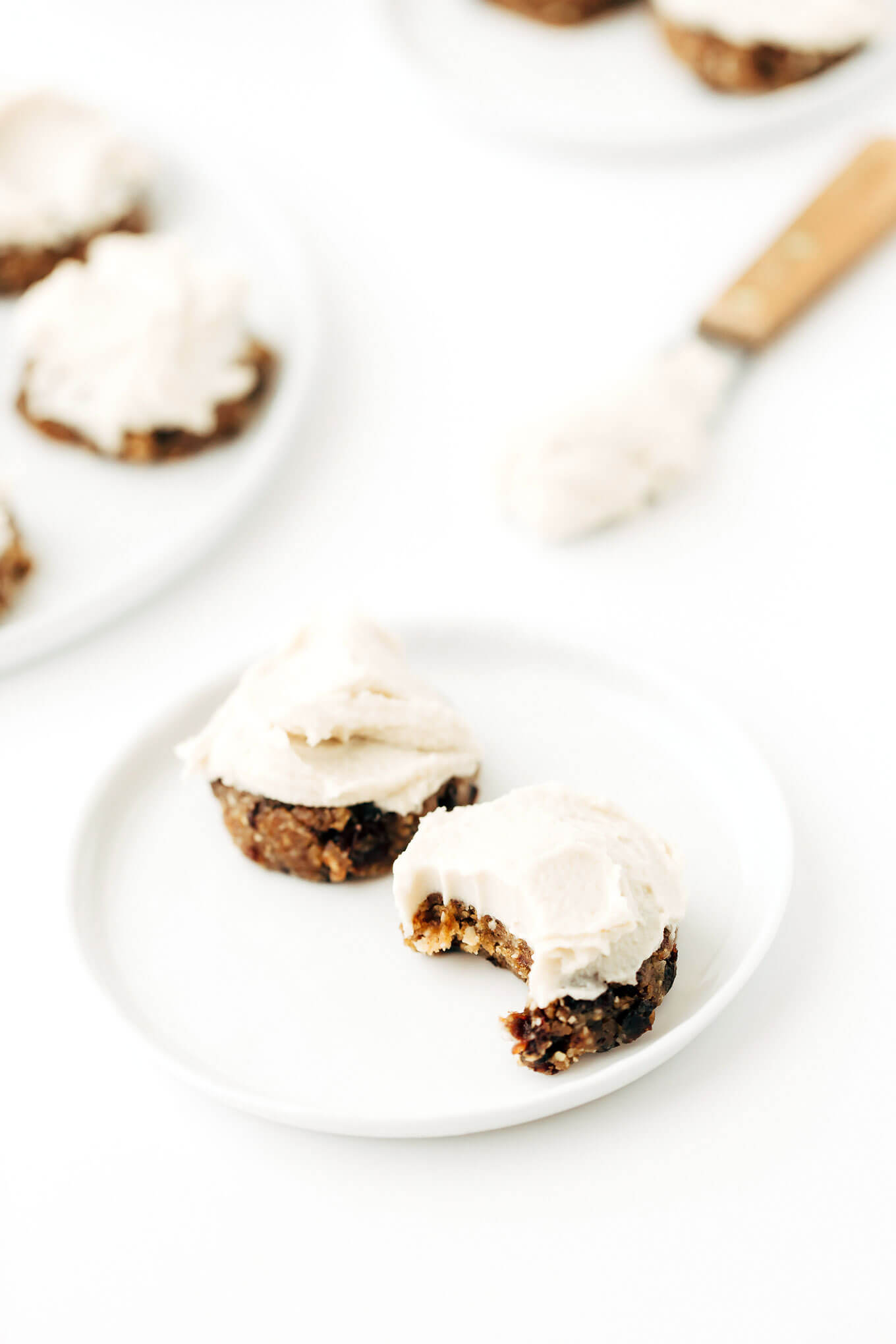 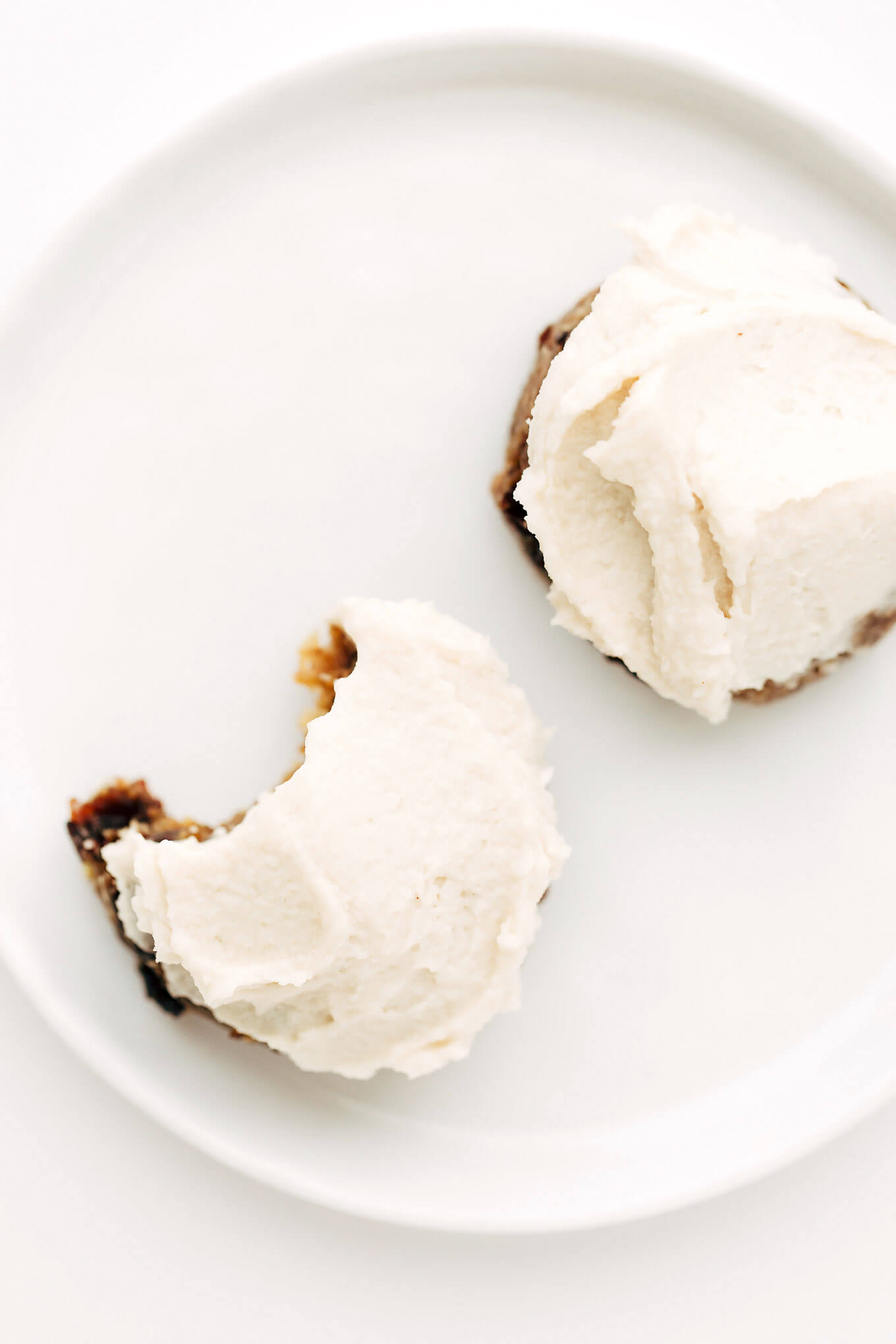 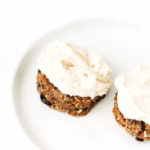 For the Vanilla Cashew Buttercream

*I find it easiest to make a fresh batch of homemade coconut butter and simply measure off ½ cup while it's still in a liquid state. However, store-bought coconut butter will yield a smoother icing because it's typically much smoother than homemade coconut butter. That said, store-bought coconut butter can be tricky to melt because it scorches and burns easily which leads to a seized, hardened texture. It's also WAY expensive (i.e., $14) compared to homemade, which usually only costs $2–$4 to make. **Do not substitute the coconut flour. Coconut flour is highly absorbent, much more so than any other flour, which is why it's perfect for thickening this buttercream.  ***You'll have quite a bit of leftover buttercream icing (about ⅓ to ½ of the recipe, depending on how generously you frost). I've tried halving the recipe, but it becomes finicky and fussy while blending, so I don't recommend going that route. Fortunately, it freezes well and can be used for a future batch of cookies. Simply scoop any leftover buttercream into an airtight container and freeze for up to 1 month.