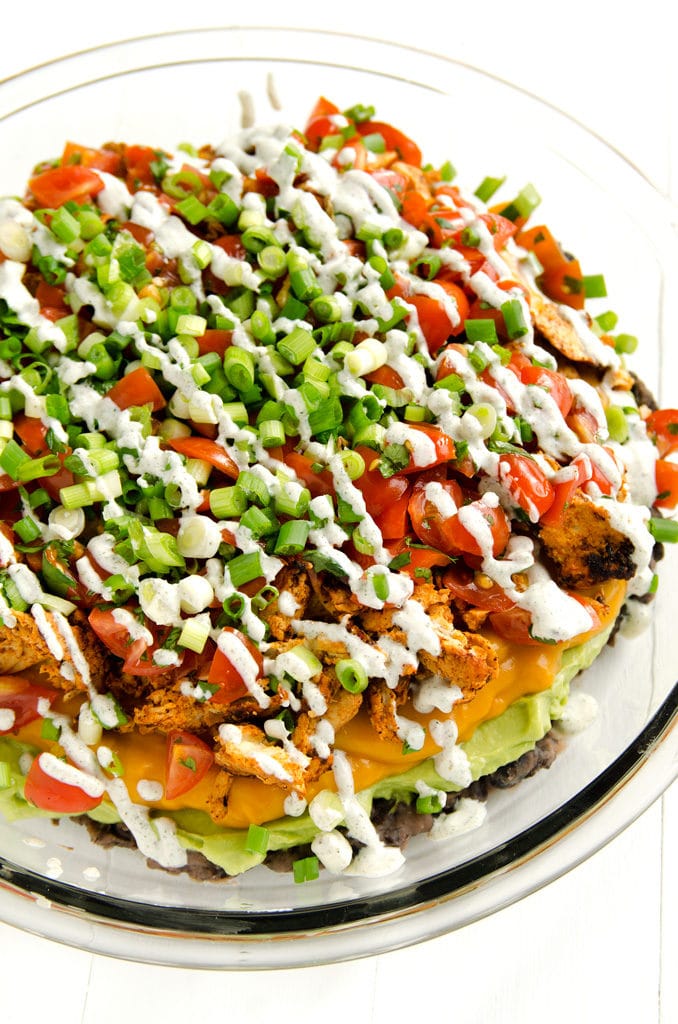 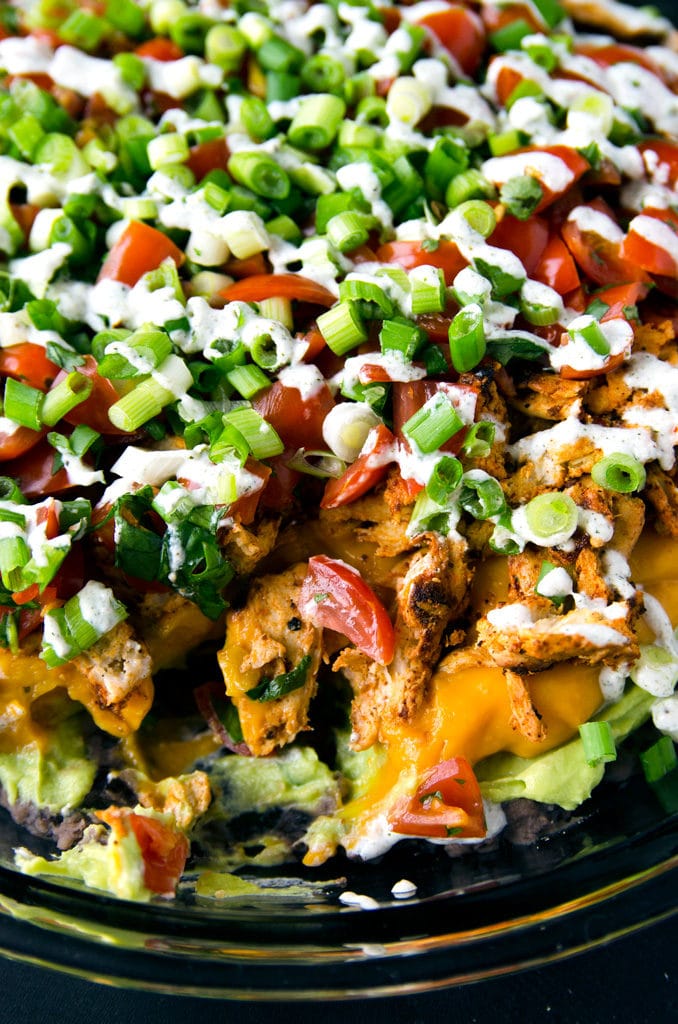 This post is sponsored by Gardein™ in conjunction with the Meet Chef campaign; however, all opinions are my own.

Making this layered stack of goodness requires a handful of steps, but I promise that the effort is completely worth it in the end, as it's seriously the most satisfying nacho dip ever (vegan or otherwise). Plus, you can prepare most of the layers ahead of time, which makes it easier to toss together before serving.

This dip earned not one but two thumbs up from Dan. He's always been my toughest recipe critic -- in a constructive, kind, fun-loving way -- so, a two-thumbs-up rating from him is kind of like earning an A on a Chemistry exam during my sophomore year of high school; it only happens occasionally (okay, rarely) but it's a total confidence booster.

To make this crowd-pleaser, you'll start by sprinkling two Gardein Chick'n Scallopini with a mixture of smoked paprika and chili powder. Then, you'll toss them into a skillet to cook, let them cool, and shred them into bite-sized pieces. 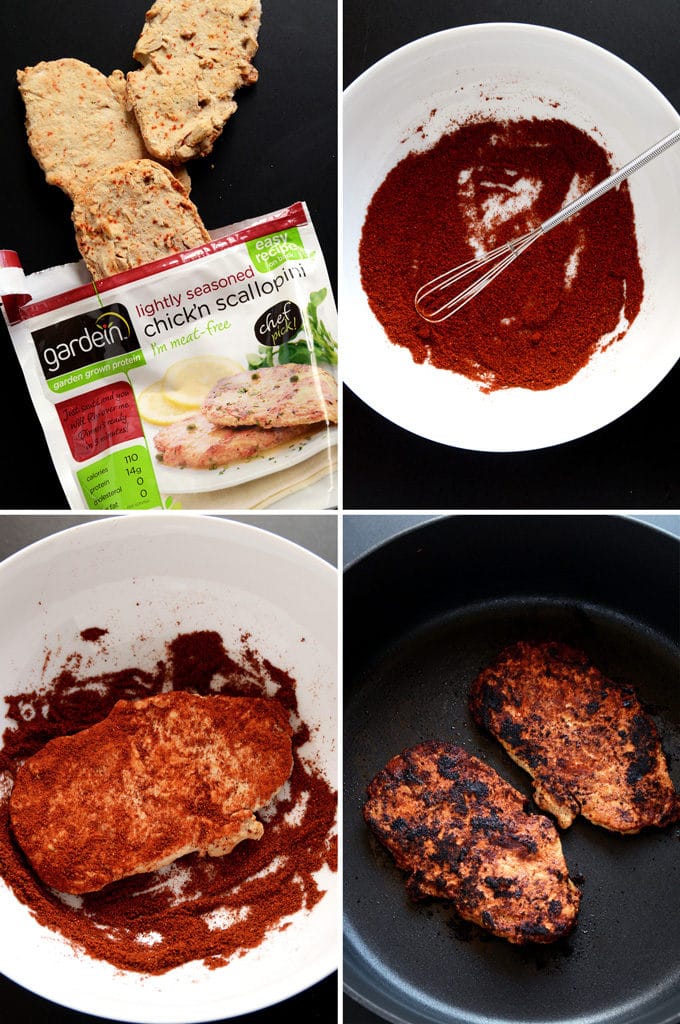 Next, you'll make a simple, homemade version of refried beans by simmering black beans until they're tender and easily mashed with a fork. These refried black beans become the first layer. One down, six to go!

The second layer is an avocado mayo, which is just avocado, a splash of lime juice, a clove of garlic, and a pinch of salt that's been processed into a smooth cream in a food processor. The third layer is this sweet potato nacho cheese, which is brightly-hued, plant-based, and packed with Vitamin A thanks to the steamed sweet potatoes. The fourth layer is the seasoned and shredded chick'n. The fifth layer is a quick and easy pico de gallo that you'll make by combining quartered cherry tomatoes, cilantro, and sea salt. The sixth layer is a quick sprinkling of sliced scallions. And the seventh and final layer is a drizzle of hemp seed sour cream that packs a kick of omega-3, omega-6, and complete protein.

Check out this layering action... 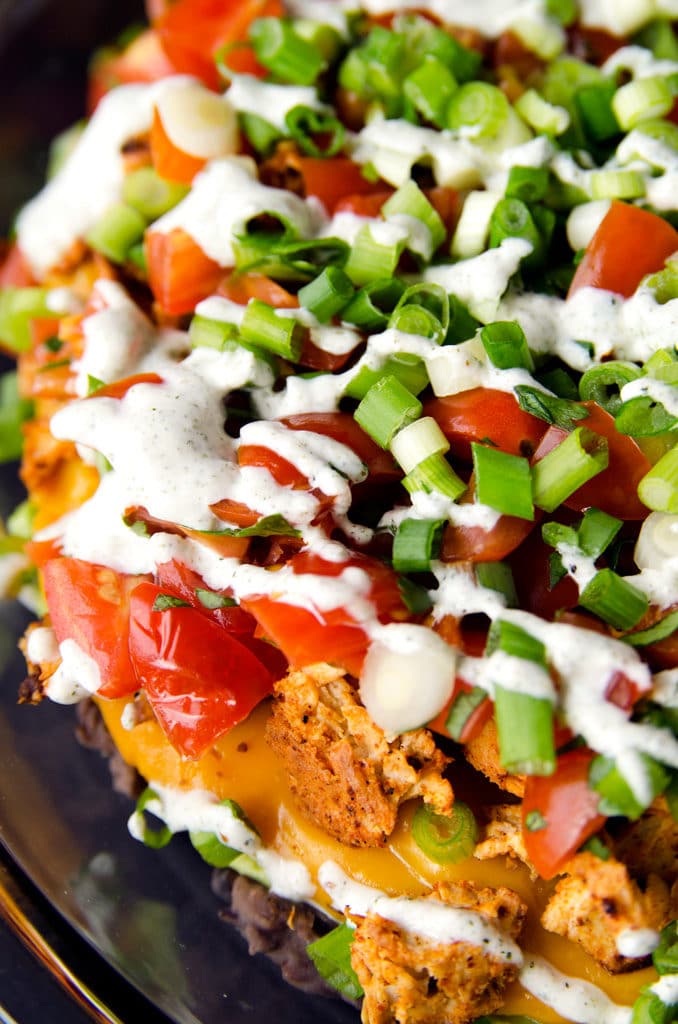 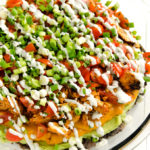 For the Refried Black Beans

For the Avocado Mayo

For the Sweet Potato Nacho Cheese

For the Shredded Chick'n

For the Pico de Gallo

For the Hemp Seed Sour Cream

To Make the Refried Black Beans

To Make the Avocado Mayo

To Make the Shredded Chick'n

To Make the Pico de Gallo

To make the preparation easier, I recommend making the refried black beans, sweet potato nacho cheese, chick'n, and hemp seed sour cream ahead of time (the day before works great). Then, simply reheat each element (adding water to the cheese and black beans, if needed) and before layering and serving.
Also, the assembled dish can be prepared the morning of and served later in the day. Simply cover and refrigerate until ready to serve.

This is a sponsored conversation written by me on behalf of Gardein . The opinions and text are all mine.